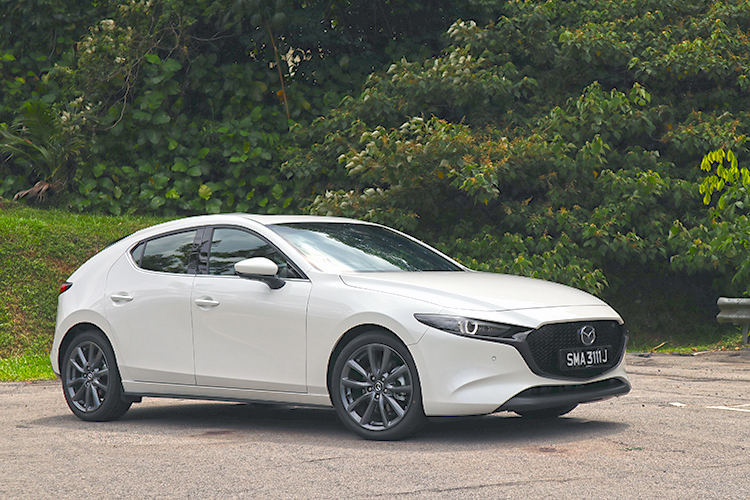 My first drive in the current-gen Mazda 3 Hatchback was in a Skyactiv-X variant. It had eye-catching Soul Red Crystal Metallic paintwork.

So, the bar had been set rather high. When I discovered that the local test-unit (above image) was a 1.5-litre, I wondered how good it could be.

The Mazda 3 1.5 Hatchback, in top-spec Astina trim, is visually identical to the Skyactiv-X model I drove in Germany.

Its wheels and the tyres (Bridgestone Turanza T005As) are similar, too. I had expected even more comfort-oriented tyres. It was nice to know this was not the case. 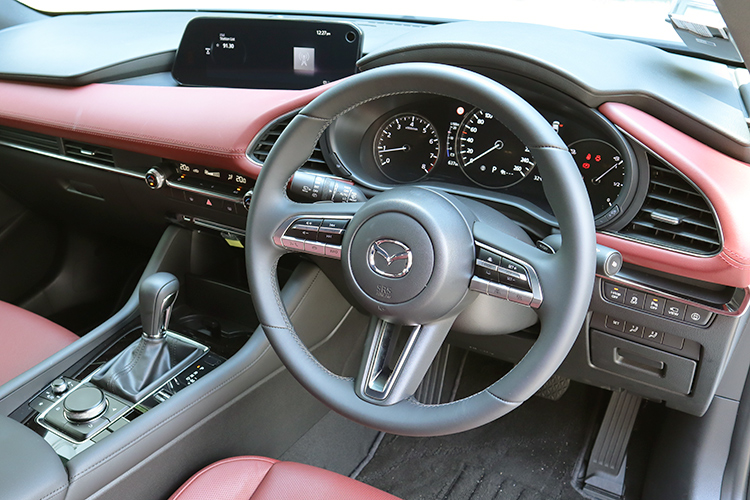 The Mazda 3 Hatchback is a head-turner from almost all angles. However, lighter colours don’t do it justice.

In white, or Snowflake White Pearl Mica, the car’s contours are flattened. And the reflections on the doors, which the designers worked hard to achieve, are lost.

But that aside, this is still one good-looking hatch.

DID ANYTHING GO MISSING INSIDE?

Surprisingly, no. The Mazda 3 1.5 Hatchback’s interior is identical to the Skyactiv-X model’s.

I said it before: The Mazda 3 Hatchback’s interior raises the benchmark in its segment. Its neat styling, refinement and the plushness of the materials are very impressive.

The seats are just as comfy and supportive, too. And the driving position is spot on. You can tell that the designers and engineers are petrolheads. 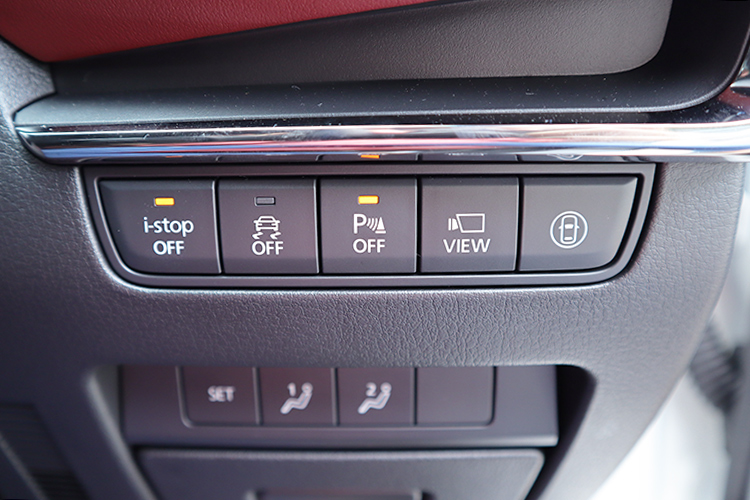 The infotainment, which is more intuitive, is even nicer to use. Every time you need to go back to the home screen, press the rotary knob.

I would have preferred a touchscreen, but Mazda engineers think it’s a safety issue.

According to them, touchscreens are inaccurate because you need to find the exact spot to press. That could compromise safety while driving.

Perhaps the system isn’t as advanced because there’s no voice assistant. But that’s okay. Most people will use either Apple CarPlay or Android Auto anyway.

What’s awesome, though, is the fact that engineers worked on the tactility of the cabin’s controls and buttons. They even determined the right “clicking” sound that would sound nice to drivers. 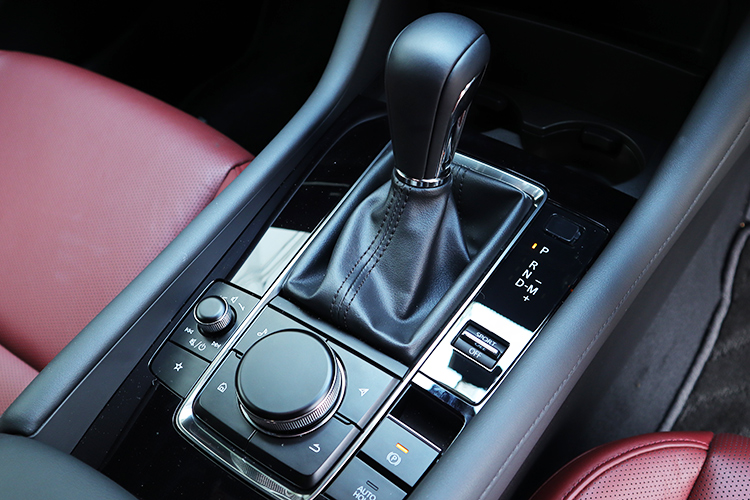 WHAT THE MAZDA 3 HATCHBACK COULD USE…

Well, more space in the backseat would be nice. The wheelbase is now 25mm longer than before, but roominess is still not the Mazda 3 Hatchback’s strength.

And speaking of space, more boot space would be nice as well. The current boot capacity of 295 litres is 13 litres smaller than before.

It’s not a big deal, but I do get the feeling Mazda wants its owners to tidy up. And refrain from buying too many things. Sounds like a famous author… 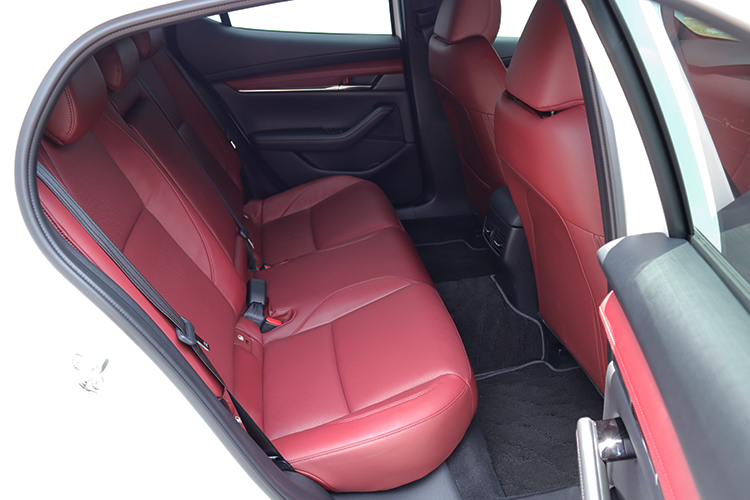 HOW DOES IT DRIVE?

Obviously, it’s not as peppy as the Mazda 3 Hatchback equipped with the more powerful Skyactiv-X engine.

But for a naturally aspirated 1.5-litre with 118hp (120ps), this particular unit is capable. And like most Mazdas, it is rev-happy and very responsive.

The way to drive the Mazda 3 1.5 Hatchback then, is to rev it hard and rev it often. Its drivetrain is more than willing to accommodate this.

Short, sharp pressure applied to the accelerator pedal will cause the 6-speed automatic to drop two gears. The tachometer needle swings to the right and the car piles on the speed. 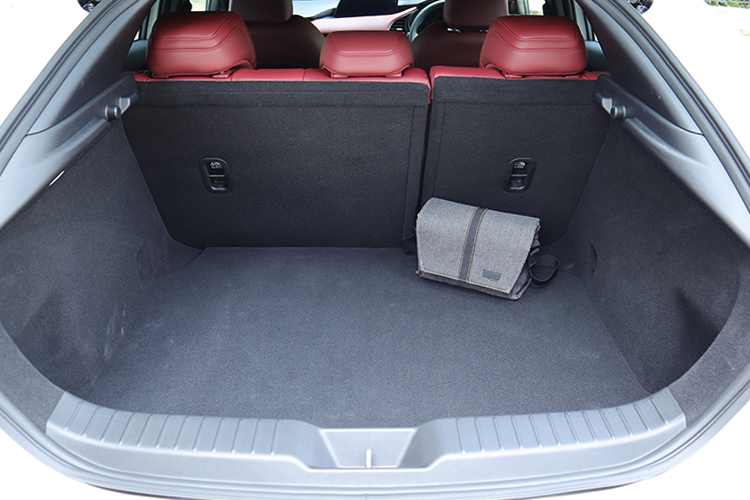 Compared to say, a VW Golf which has a turbocharged engine, the Mazda 3 doesn’t feel punchy. In fact, its zero t0 100km/h time of 12.1 seconds is relaxed.

But is it responsive? Heck yeah.

As someone who loves driving, I want a car that responds to each of my inputs. And the 3 Hatchback always does.

HANDLING IS ITS VIRTUE

What the Mazda 3 Hatchback has in spades is handling. Cars in this segment are not expected to handle well. But this one does.

The steering feels precise, the turn-in is keen and the overall feel is stable. But there’s more. You feel that the car isn’t being totally upfront.

Indeed, the Mazda 3 is engineered to deliver more, according to programme engineer Kota Beppu. Beppu-san, an MX-5 fan, actually wants the Mazda 3 to handle like the roadster. 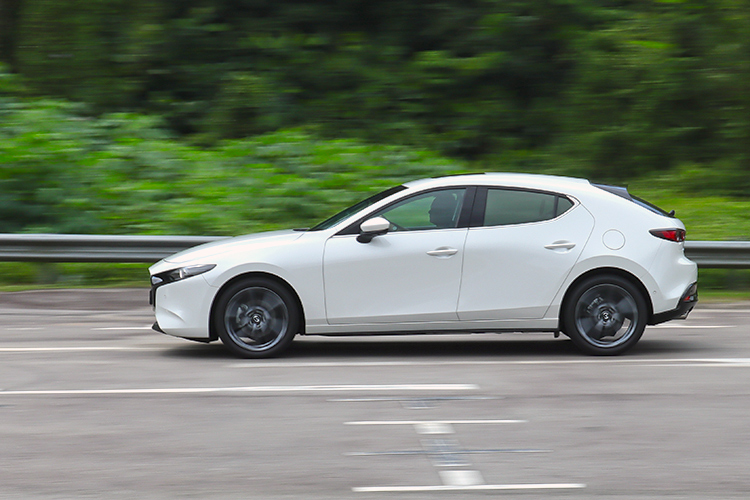 The hatchback’s limitations, at the moment, are its touring tyres. With high-performance tyres, the car’s agility, braking and cornering abilities will be enhanced.

The Mazda 3 Hatchback has an M-Hybrid system. But it’s not a full hybrid car, for the system cannot actually drive the vehicle.

What M-Hybrid does is recover energy from braking/deceleration. An integrated starter generator (ISG) takes this energy and stores it in a lithium-ion battery.

This energy is used to power electrical components and help restart the engine during the start-stop procedure. 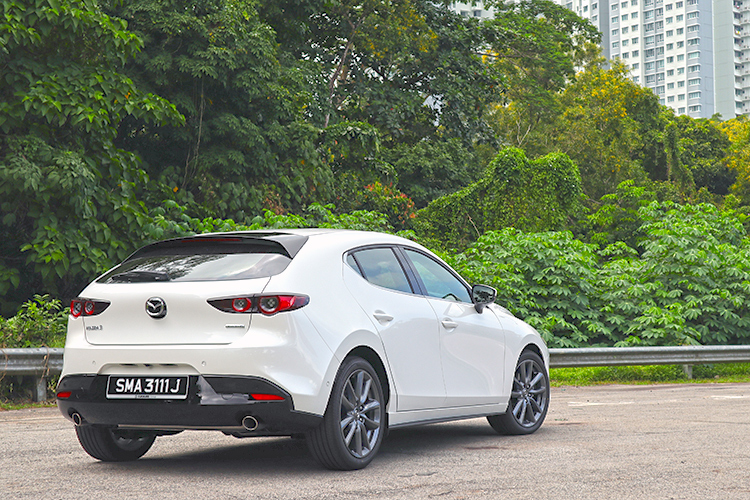 The power is also utilised in assisting the engine when moving off from a standstill.

So, it supposedly helps save fuel. But how much you’ll save is up to you and the road conditions you face daily.

WHO IS THE MAZDA 3 HATCHBACK SUITED TO?

If you like hatchbacks and you love to drive, the Mazda 3 Hatchback is right up your alley.

The 1.5-litre engine looks weedy on paper, but trust us, it gets the job done.

We love the car’s design and its swanky interior. The engineers did a great job with the seats and the handling as well. There’s very little not to like.

But if you need more performance, then wait for the Skyactiv-X model. We expect it to arrive next year.