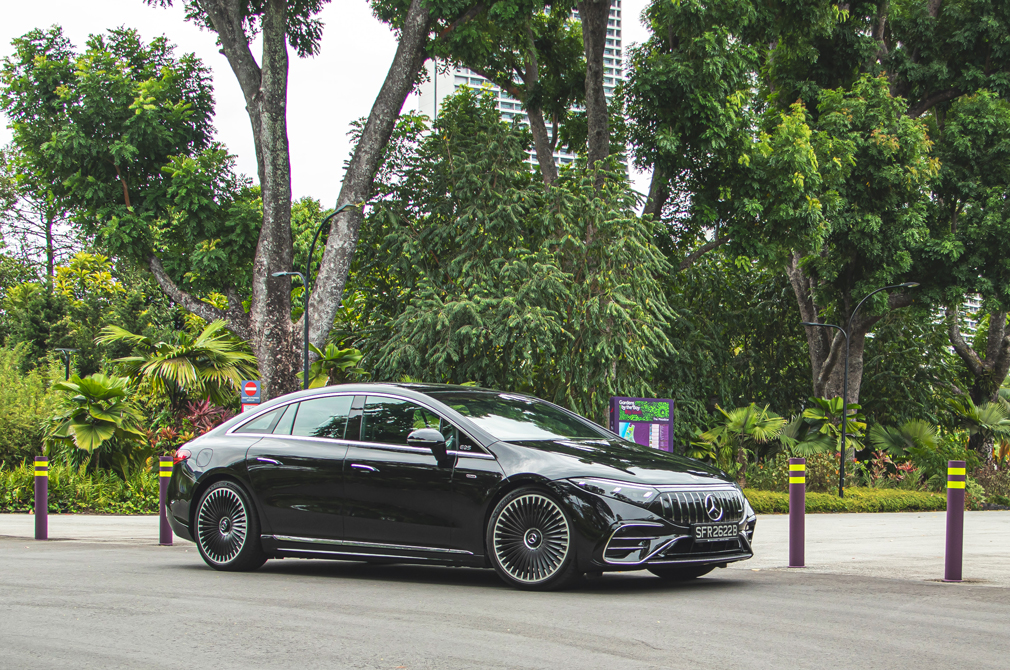 We’ve all heard the phrase “too much of a good thing is bad for you”. Too much alcohol? Well, that leads to drunkenness, risk of physical injury and yes, cirrhosis of the liver.

Too much food? Well, a tummy ache and indigestion are always ready to make their presence felt, and a ballooning waistline is almost sure to cause health issues down the road.

Now, what about too much horsepower and torque? Can you have too much of these? If you ask me, the answer is no.

But to be clear (and realistic), this is only practical in ideal conditions, such as a lack of traffic and speed limits. In Singapore, where congestion is common and driving quicker than 90km/h is illegal, then yes. A car that’s too powerful is too much.

That is until I got behind the wheel of Mercedes’ EQS53 AMG. 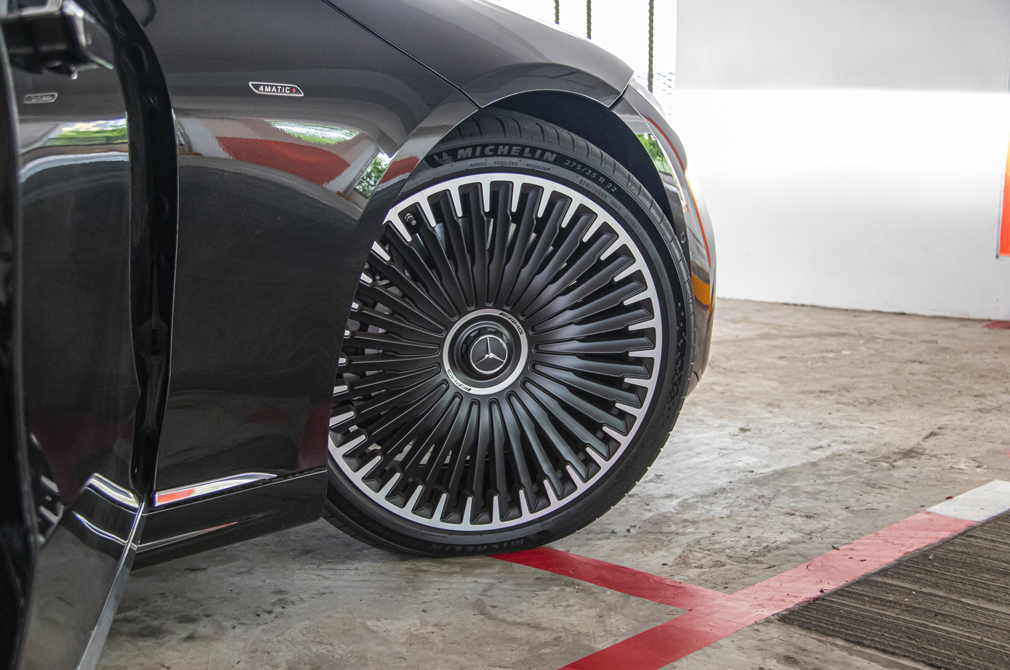 A FASTBACK AND A LIMO

The EQS is Mercedes’ flagship electric model. There are only two models in the lineup: the EQS450+ and the EQS53 AMG, which is the top variant.

Some will opine that it’s an “electric S-Class“, but it’s much more than that. It was designed and engineered to be an electric-only model, plus, despite resembling a saloon, it is actually a fastback.

In contrast to the EQS450+, the EQS53 has an edgier and sportier exterior, with the blanked-off grille featuring vertical ‘bars’. The test unit seen here is even fitted with 22-inch, centre-locking wheels – one size up on the EQS450+. 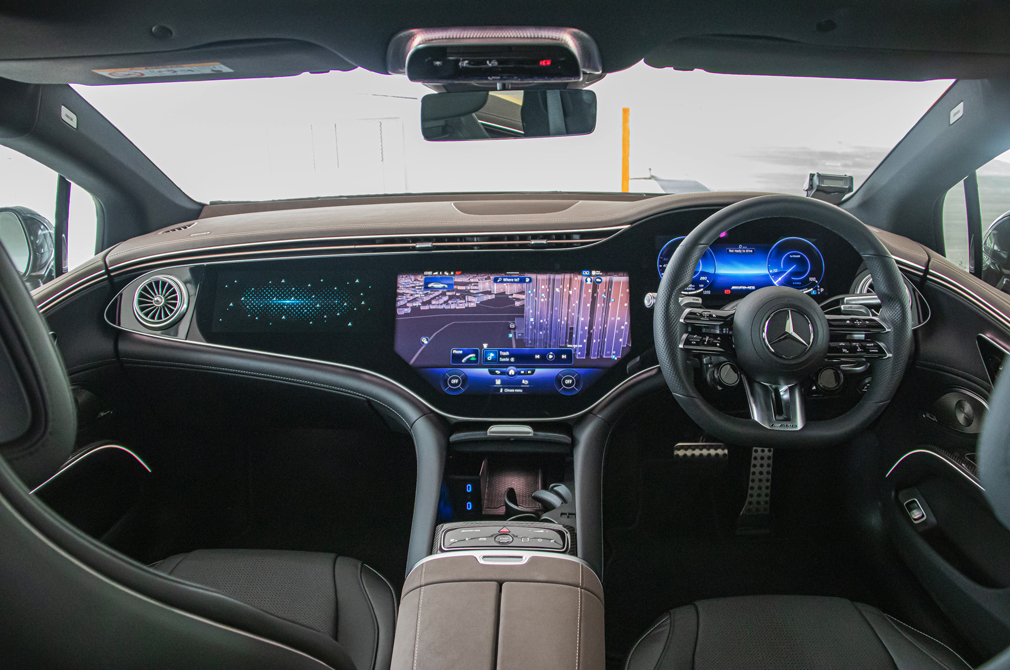 Anyway, open the door and the first thing that greets you is this huge, aptly named Hyperscreen that doesn’t just dominate the dashboard. For Pete’s sake, it is the dashboard.

The Hyperscreen actually houses three screens. There’s the instrument panel for the driver, a centre display for the infotainment, and a separate screen for the front passenger.

So, while the driver uses the centre screen for navigating, the passenger can use his own screen for say, watching videos or online shopping. OLED technology helps ensure both brilliance and contrast.

Why the driver and front passenger need so many screens is beyond me, but they’re there and can be useful, I suppose. The Hyperscreen is standard in the EQS53 AMG, but a $38,000 option in the EQS450+. 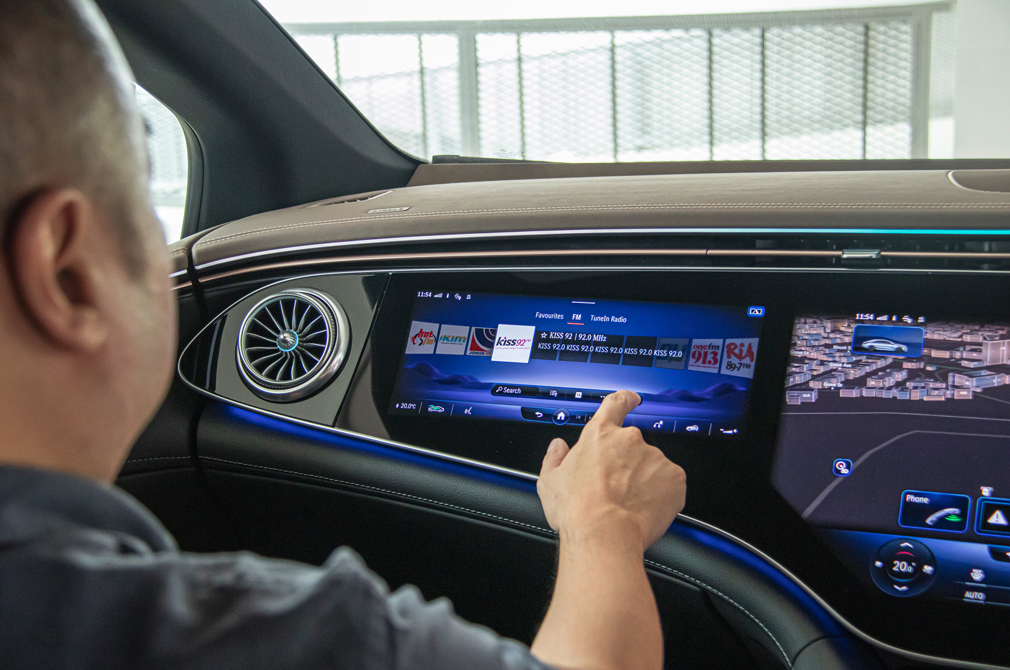 Then there’s the EQS’s ambient lighting. Yes, I’m a sucker for mood lighting in general, but I have to say, the mood lighting in here is dazzling. It can make the interior feel like a club on wheels.

Mercedes’ official name for it is Active Ambient Lighting, because it does other things, too, such as welcoming you with a ‘running’ motion or warning you of a collision risk by flashing red.

The heart of the EQS53’s excessiveness is its electric drivetrain. It has a pair of electric motors – one on each axle – fed by a humungous 107.8kWh battery. The EQS450+ has the same battery, but only a single electric motor on the rear axle.

The EQS53’s two motors churn out 649bhp and 950Nm by default. In Boost mode, which is activated when the Race Start function is used, these figures rise to 751bhp and 1,020Nm. That is stupendous.

These are eye-opening and grin-inducing. But one must also admit that nobody actually needs such output for driving on public roads.

What’s really astounding, though is how these figures enable the EQS53, which now weighs over 2.7 tonnes with myself on board, to sprint, no rocket, from rest to 100km/h in 3.8 seconds. It’s 3.4 seconds if Race Start is used. 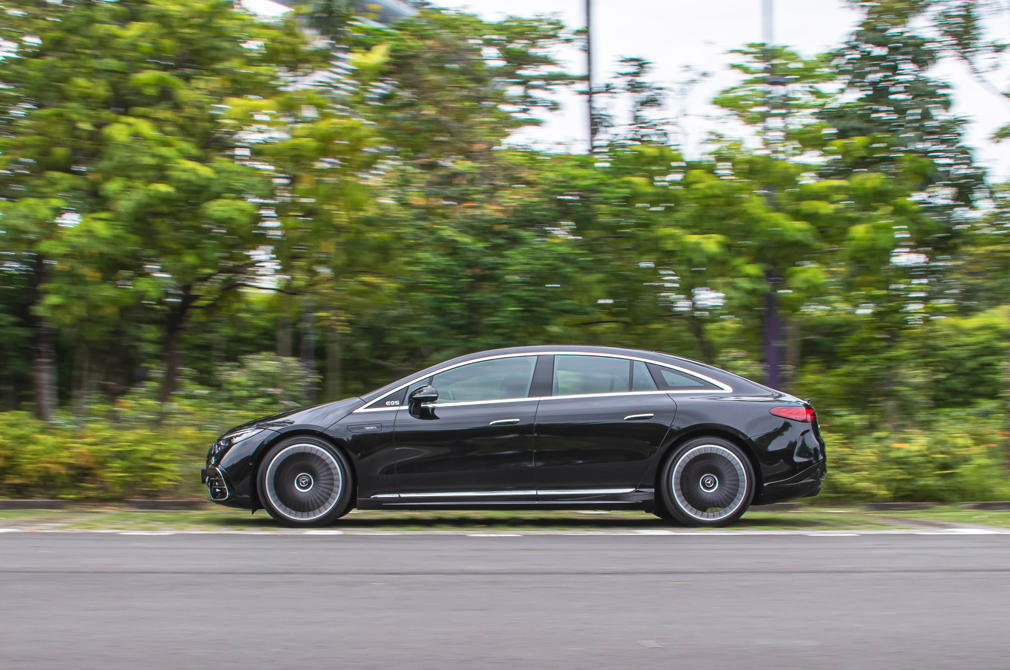 Hard to believe? Yes, it’s a surreal feeling when it happens. Brace yourself before you set the drivetrain to its most dynamic mode and slam your foot down on the accelerator.

The car shoves and then presses you into your seat, leaving you momentarily breathless. Your organs feel like they’ve left your body, cosmically, and are now some 600 metres behind. You pray they can somehow be re-attached.

Is it the most violent? Certainly not. A car like the Audi RS e-tron GT is a lot scarier, for its lighter weight makes the accelerative force harder for your senses to comprehend.

In the EQS53, you still have your wits about you, thanks to the car’s mass.

By the time you lift off the pedal to avoid breeching the national speed limit, you’re even more blown away by the fact that the 1,020Nm tsunami was just starting to form. 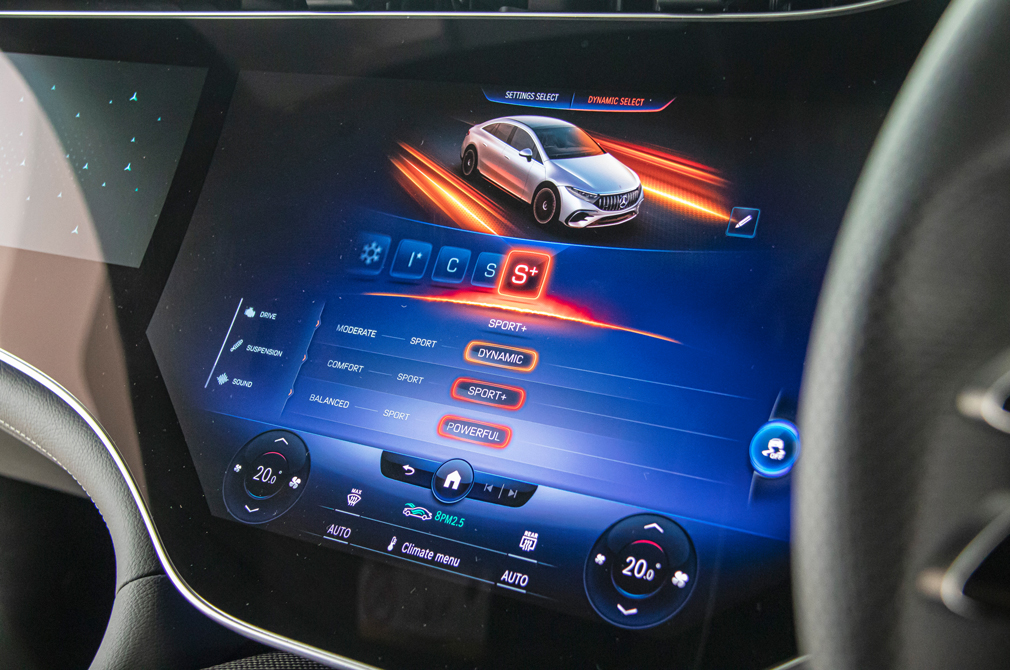 There are three soundtrack volumes for you to choose from. You can go almost-silent, or opt for the loudest, which I preferred. Other road users are also treated (or aurally assaulted) by the same soundtrack.

You’d think that driving such a powerful car is difficult, but Mercedes made it easy to modulate. It’s very linear, and the EQS53 only gives as much as you ask.

With massive 22-inch tyres, all-wheel drive, fully-variable torque distribution and rear-wheel steering, the EQS53 has grip in abundance, and you’ll need it if you want to corner quickly.

Given its heft and size, tackling bends is not the car’s forte, but they can nevertheless be easily overcome. Just know that your bum will be sliding all over the seat.

Braking is also when you’ll feel the car’s imposing physicality. The brake pedal surprisingly requires more effort than expected, so I set the energy recuperation to ‘Strong’. It really helps when shedding speed. 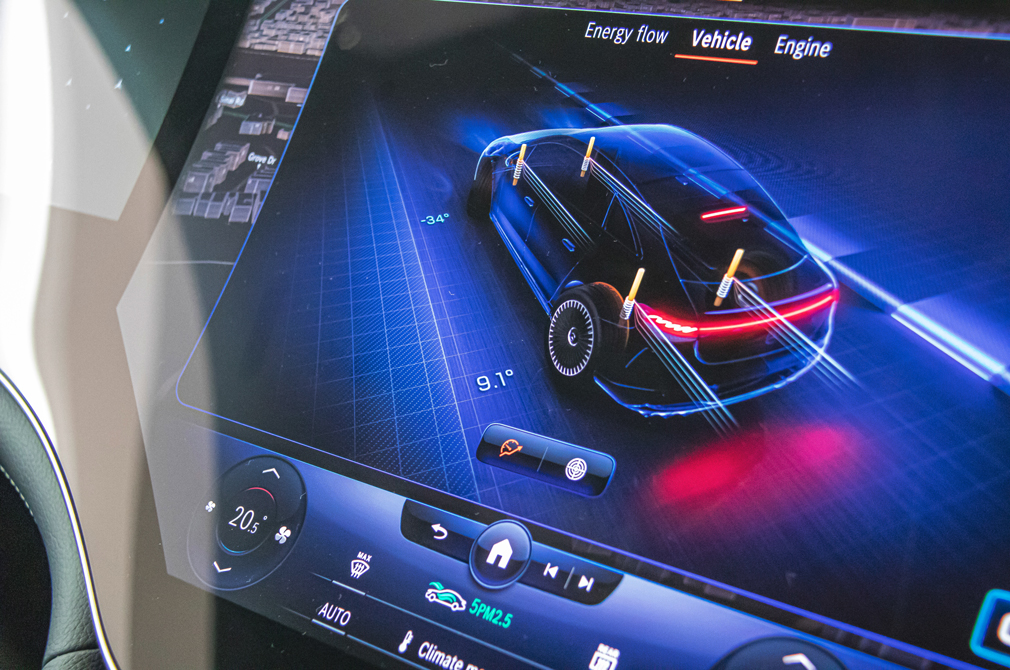 WHEN “TOO MUCH” IS JUST RIGHT

The EQS53 made me realise that sometimes, too much of something can actually feel good.

Nobody really needs a 2.7-tonne flagship electric fastback that has the ability to worry supercar drivers. The EQS450+ is arguarbly better for everyday use, and has 200km more range, too.

But the EQS53’s excessiveness is what makes it so excellent. And that’s all you need to justify wanting one. 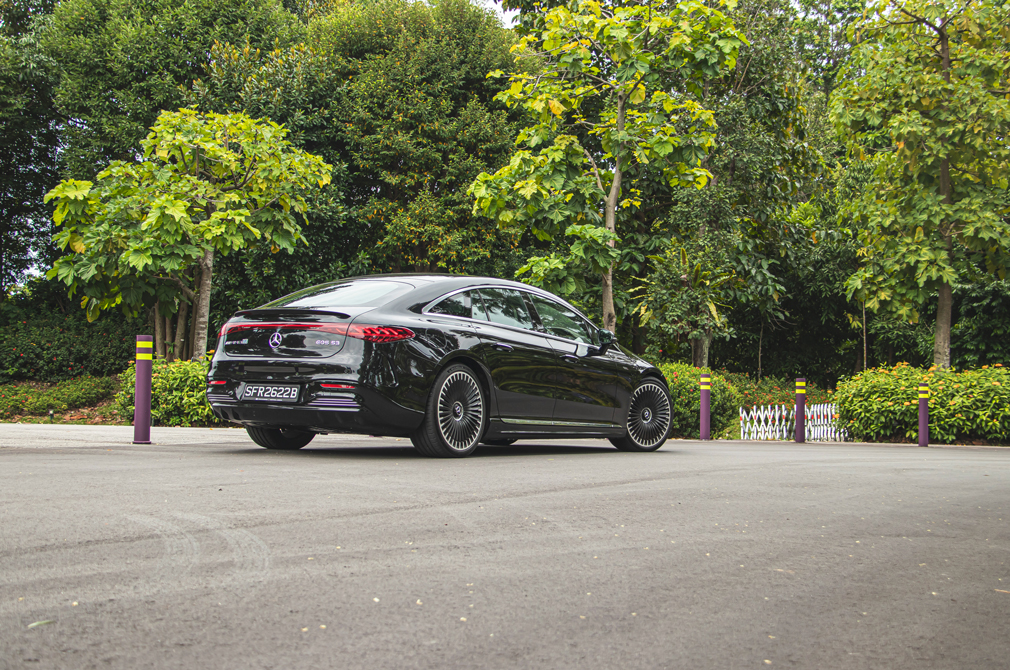 This article was first published in Sgcarmart.