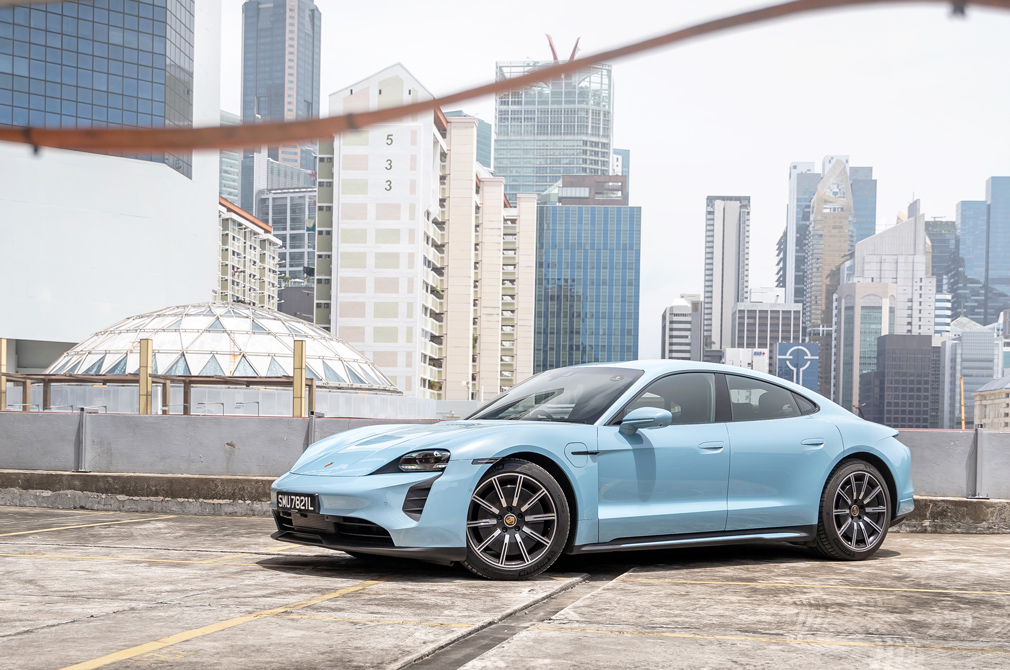 The new Porsche Taycan sets out to answer the question of what happens when one of the world’s most iconic sports car brands makes an electric vehicle.

Developed over four years from the Mission E concept, the Taycan (pronounced tai-KAHN) is the crystallisation of Porsche’s efforts to go electric.

It is significant – this is the first all-electric, mass-market performance car from the Germans to rival brash Tesla, and upon whose J1 platform rides the hopes and dreams of forthcoming models like the Taycan Gran Turismo, the Audi e-tron GT, and possibly others.

Porsche has thrown its entire know-how behind its development, and it is already paying dividends – the electron-chugging Taycan is Porsche’s best-selling model outside of its SUVs in the first half of 2020, hinting at possible changing consumer tastes. 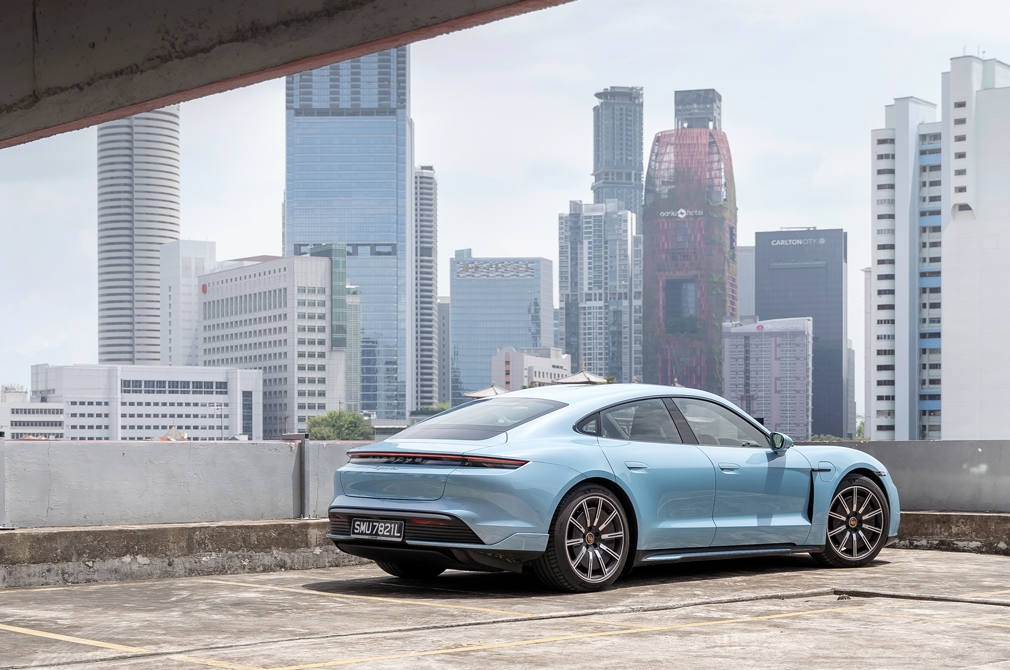 BRINGING THE FUTURE TO THE PRESENT

Porsche wants to ease us into the electric age, and they have done well. The Taycan’s low, sloping roofline, tight glasshouse and rear lightbar echo the current 911, while its twin four-point LED headlights look straight out of Star Wars.

At the rear, the “PORSCHE” lettering is individually laid out in glass effect and integrated into the rear lightbar. They thankfully do not light up like a cheap aftermarket part.

The Porsche Taycan’s underfloor batteries are cleverly packaged to push both car and passengers lower to the ground. Spaces in the battery, called “foot garages”, provide more legroom for the rear folks, and serve to lower the car’s overall centre of gravity.

With no internal-combustion drivetrain, Porsche engineers have covered up the underbody to reduce drag and installed a wide rear diffuser.

The result is a car that is shorter, lower and wider-hipped than the comparable Panamera 4S. With a drag coefficient of 0.22, Porsche claims the Taycan is also the slipperiest of all its current models. 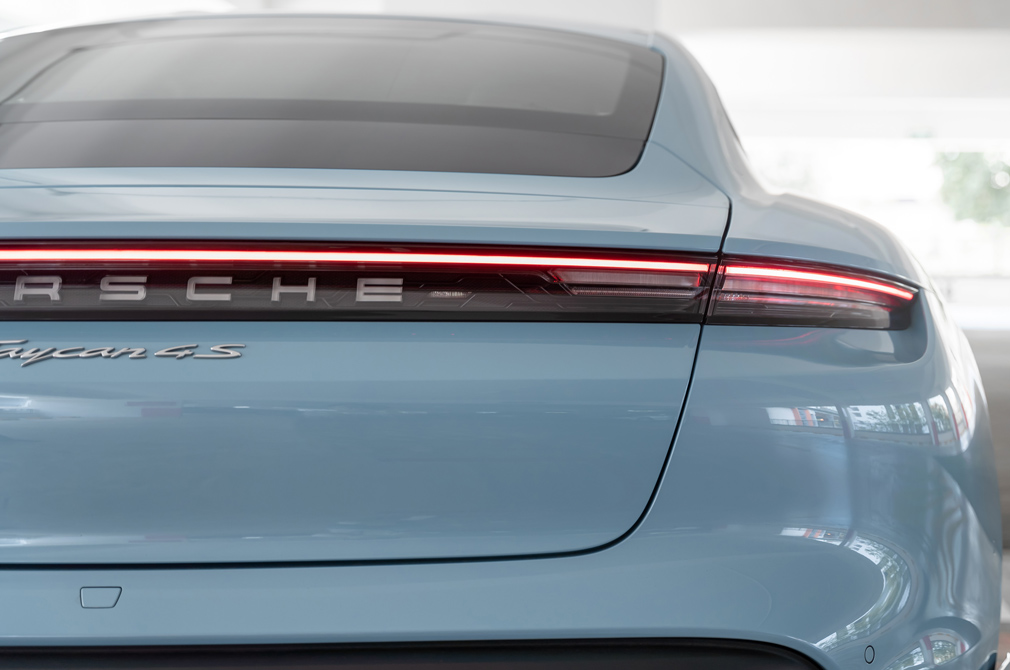 Conversely, that high voltage produces lots of heat, which Porsche has taken great pains to get rid of through multiple thermal management measures.

The Frozenblue Metallic Taycan 4S here is equipped with the eye-watering $26,536 Performance Battery Plus option.

That means more power and range from a gross battery capacity of 93.4kWh compared with 79.2kWh without. Porsche claims a 414km range on a fully juiced pack, but it is around 360km in reality. 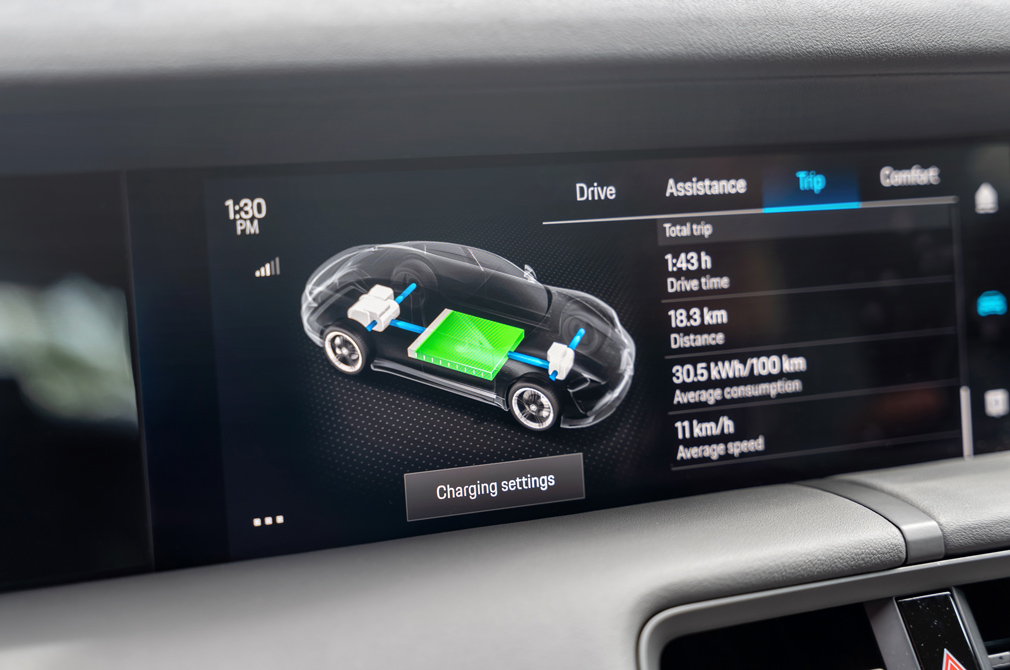 The Porsche Taycan 4S can be charged from 5 to 80 percent in about 22 minutes with an 800-volt charger (good luck finding one), or 100km of range in a blazing five minutes.

With a 50kW direct-current (DC) charger, such as those found at Shell Recharge stations, a half hour (a quick lunch) nets you about 100km of range.

If you can spare an hour and a half eating a large meal and downing a kopi-o-kosong afterwards, you will gain an 80 percent charge. Doing the same with the slower on-board 11kW alternating-current (AC) charger will take nine hours.

Slip into the snug sports seats and the rather spacious, space-age cockpit is instantly recognisable as a product from Porscheplatz, Stuttgart, albeit one from a digital future.

You sit down low, ensconced within the elevated cockpit, making you feel immediately “at one” with the car.

Porsche purists might baulk at what is next: from the instrument panel to the air-con controls, everything is now displayed across three crisp, responsive screens, including the cinematic 16.8-inch curved panel for the instruments. 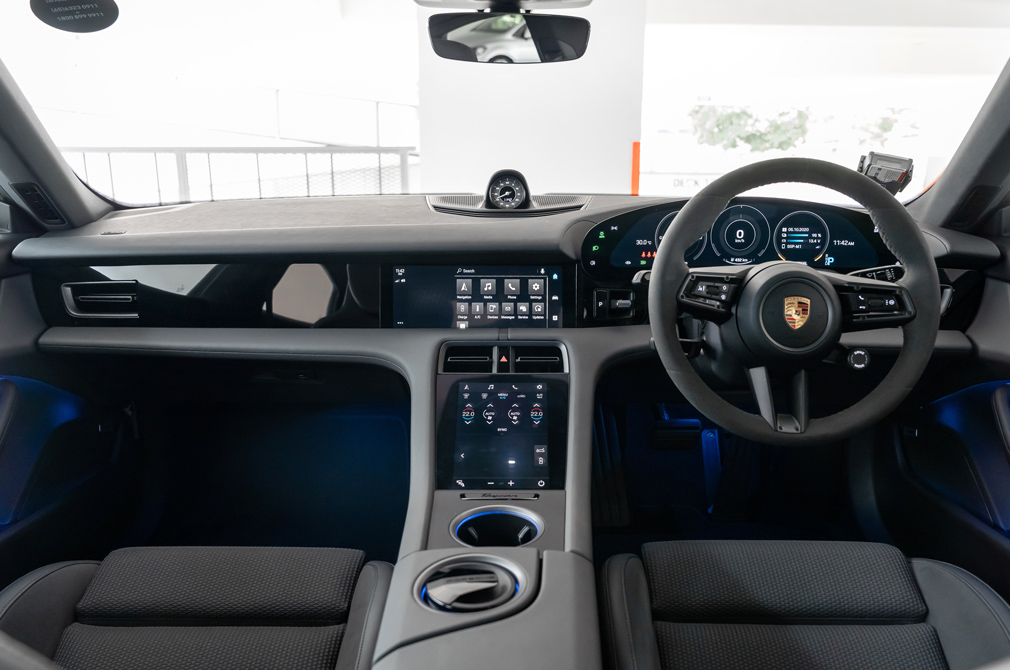 The Porsche Taycan 4S is so high-tech that you must adjust the AC vent positions in the infotainment menu. There is an optional fourth screen for the passenger (not fitted here) that lets them adjust the infotainment, which itself is intuitive and unfussy.

I would have preferred some manual controls for the air-con or radio, but at least the screens themselves are high-resolution. If you can live with them, they represent the cutting edge of modern automotive tech.

Passengers of, say 178cm, will be perfectly satisfied with the rear space, thanks to the aforementioned foot garages, and the 4S’ storage space at the rear and front “frunk” is a very usable 407 and 84 litres, respectively.

Nothing prepares you for launch in a car as powerful as the Taycan, made even more disorienting by its silent and effortlessly brutal acceleration from standstill.

Turn the drive mode dial to Sport and the Taycan hunkers 22mm lower over its 20-inch Sport Aero wheels.

Stand your left foot on the brake pedal, mash the throttle, slip your left foot off and suddenly, you are accelerating at speeds that would embarrass the Millennium Falcon.

The two permanently-excited synchronous electric motors – one in the front and rear – spew out 490hp and 650Nm of torque in 4S spec, launching the Porsche Taycan to 100km/h in four seconds and on to a 250km/h maximum.

Judging by the unrepeatable phrases from my fellow passengers, and knowing Porsche sometimes furnishes conservative performance figures, I suspect the claimed century sprint time is in fact a tad quicker.

Unlike the building revs in a petrol-powered car, there is no indication that you’re doing alarming speeds aside from faster-moving scenery, a rapidly-climbing speedo and an artificial, space-age hum called the Porsche Electric Sport Sound (you can turn it off) that I rather liked. 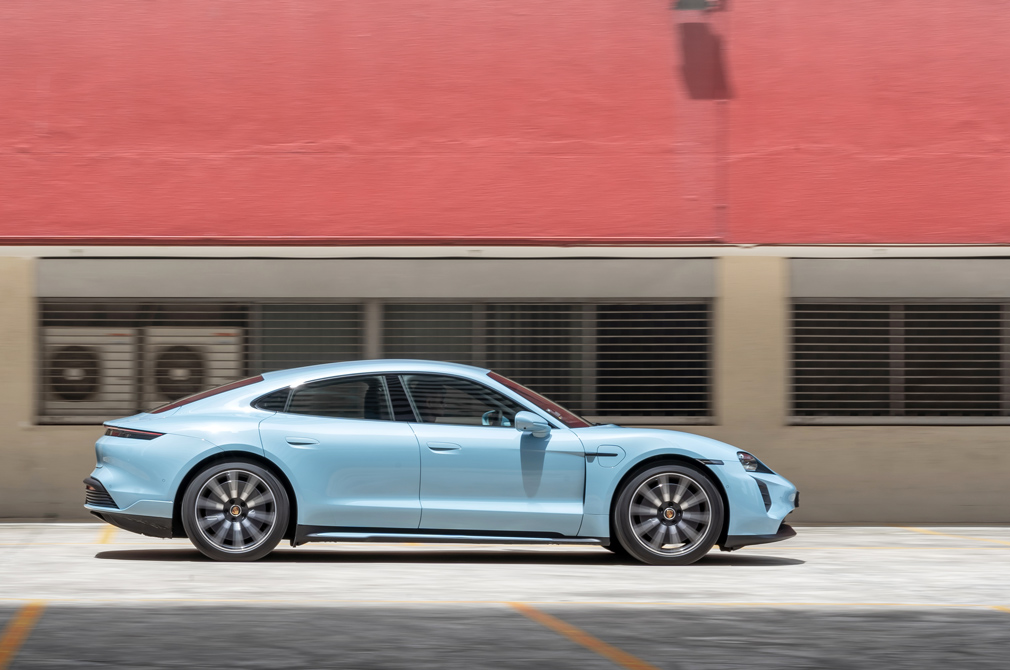 Porsche engineers are known to dabble in magic, but they have pulled off a spellbinding illusion to disguise the Taycan’s 2220kg bulk.

Body roll is masterfully controlled for such a heavy car, and the perfectly judged steering allows for precise input into every corner, every time.

You also get just the right level of feedback through the slim wheel, goading you into pushing that bit harder through corners while the grippy Michelin Pilot Sport 4 tyres keep you from spearing off.

With no turbocharged lurchiness to contend with, the throttle pedal is pleasingly linear, and the brakes are progressive and meaty too.

At the rear axle, Porsche has fitted a two-speed transmission with a low first gear that is used in Sport or Sport Plus modes, and a taller second gear when you are going faster.

If you flex your right foot hard, you can feel the car kick down into the lower gear, which could be a strange sensation to those used to single-gear EVs.

The Porsche Taycan is proof positive that when it comes time to ditch the gas-guzzling dinosaurs of the 20th century, EVs will not be the boring machines we thought they would be.

In the Taycan, Porsche has created a masterpiece: a car that stops, starts, steers and beguiles in equal measure – a smooth mix of enthralling performance and everyday usability.

The company has managed to turn the ungainly EV argument on its head, using electrification to its full advantage. At the same time, it ushers in a bright future with a car that will take some time to be surpassed. 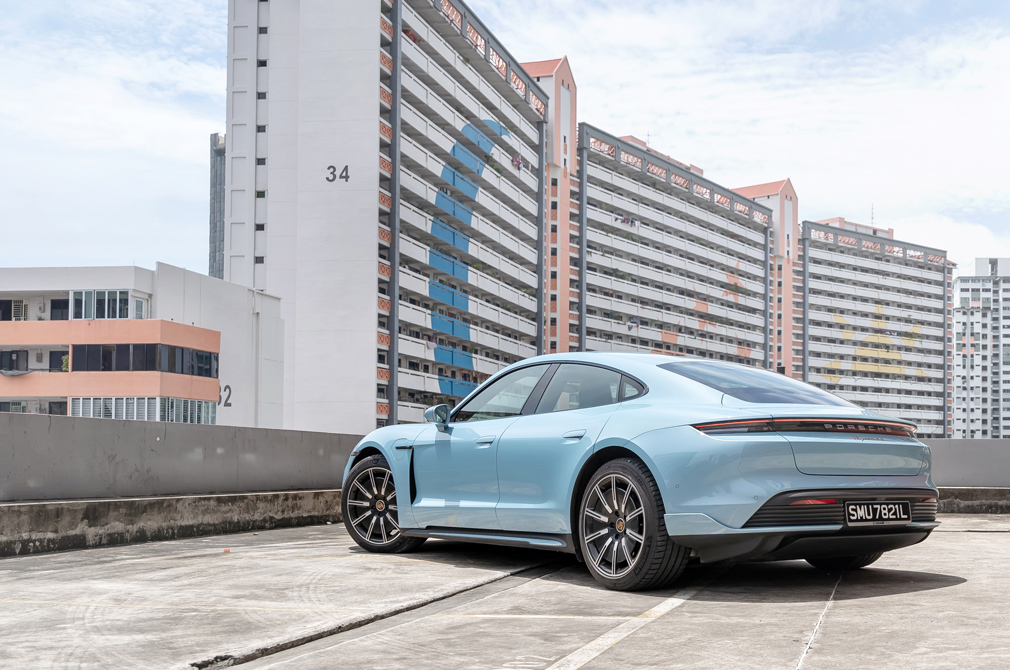