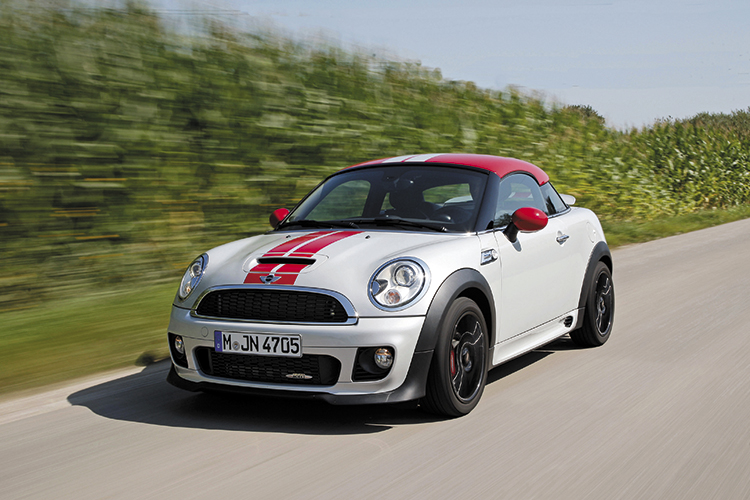 The MINI range is eccentric and the individual models are cheeky. BMW and the Brits love to do things differently for the greatest little designer label in modern motoring. Their idea of a station wagon, for instance, is the quirky and not very practical Clubman with its “cupboard doors”, while their concept of a crossover is the offbeat Countryman. And their Cabriolet could pass off as the world’s most expensive pram (and it’s expressive, too).

Now MINI has introduced the Coupe, its first two-seater. Actually, this is its second if you count the R53 Cooper S Works GP from a few years back. That 2000-unit limited edition, in custom Thunder Blue colour, replaced the rear seats with a strut brace and went through a weight-loss programme. It was assembled by Bertone in Italy. 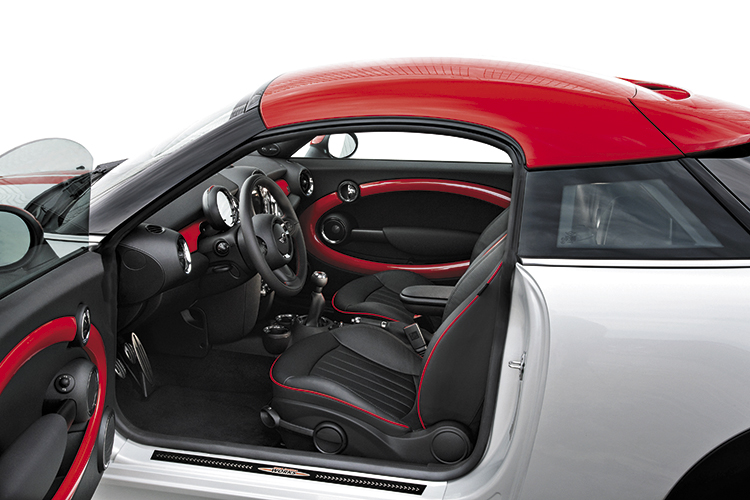 Italian designers worth their salt and pasta would look at the MINI Coupe and wonder which stupid kid wearing a baseball cap backwards inspired the look of the roof. They might be thinking: “Where is the flair? How goes the flow?” That canopy is pretty aerodynamic, in fact. Its visor and A-pillars are more sharply raked than on other MINIs, and the trailing edge has a neatly integrated spoiler.

Decorate the headgear with factory-supplied racing stripes and it cuts through the air even more readily – at least in theory. In practice, however, it is the active wing (automatically deployed at 80km/h) built into the rear deck that gives this coupe good aerodynamics – or maybe it puts a lid on bad aerodynamics. 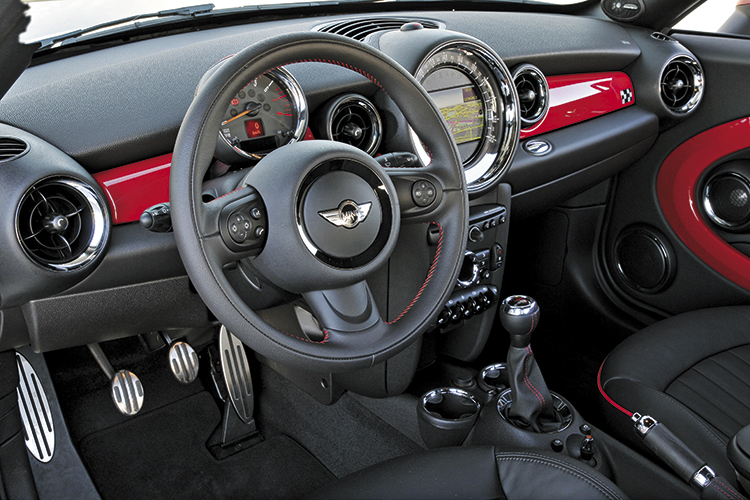 Whatever the case, it seems to work. At an indicated 200km/h on the autobahn, this new MINI is very steady for something so small. It gets to 200 quickly, thanks to the John Cooper Works turbo 1.6-litre which develops a punchy 211bhp. A tight 6-speed manual transmission, with pedals well-placed for heel-and-toe, transfers the juice.

At low revs, the powerplant is already pulling well; the torque then swells up like a typhoon under the bonnet as the revs climb higher, and when the tacho needle approaches the redline, there is a last burst of sweet energy. 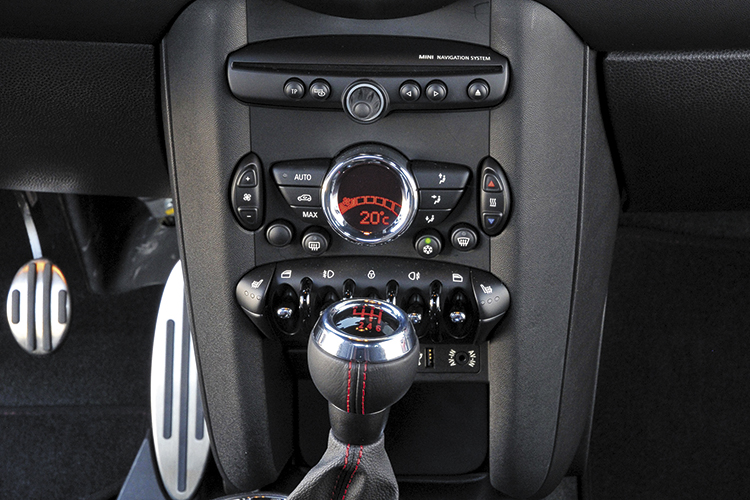 Press the Sport button on the centre console and the throttle response goes from sharp to razor-edged, which makes the power even more accessible and the matching of revs to gear ratio down the ’box even easier. This engine Works like a wet dream.

Specs box anoraks will notice that the century sprint time is a mere 0.1 of a second faster than the regular Cooper S JCW hatchback. The Coupe is actually 25kg heavier, so that split-second advantage is probably attributable to better traction brought about by the slight shift in weight bias towards the front. 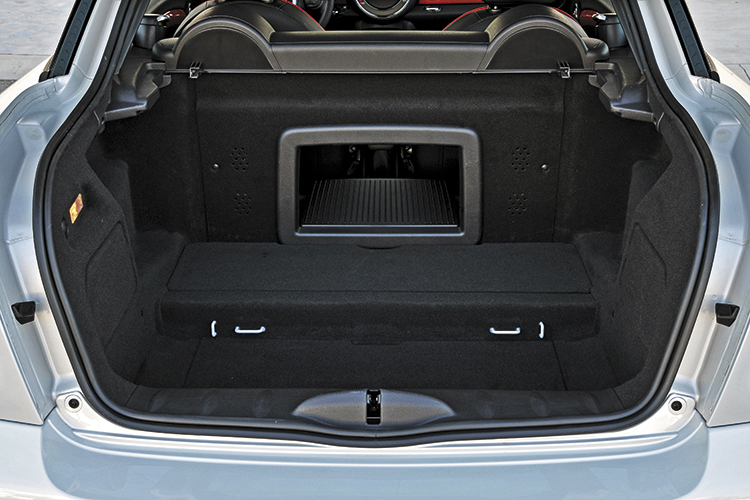 According to powertrain team leader Helmut Hoen, reduced mechanical and physical drag also plays a part in the improved acceleration.

The coupe weighs more than the hatch because it uses the relatively heavy chassis of the convertible. Ditching the back seats obviously saved some kilos, but the engineers added crossmembers to give the Coupe the highest torsional rigidity of any MINI. This lets the suspension perform to the best of its “agility”. 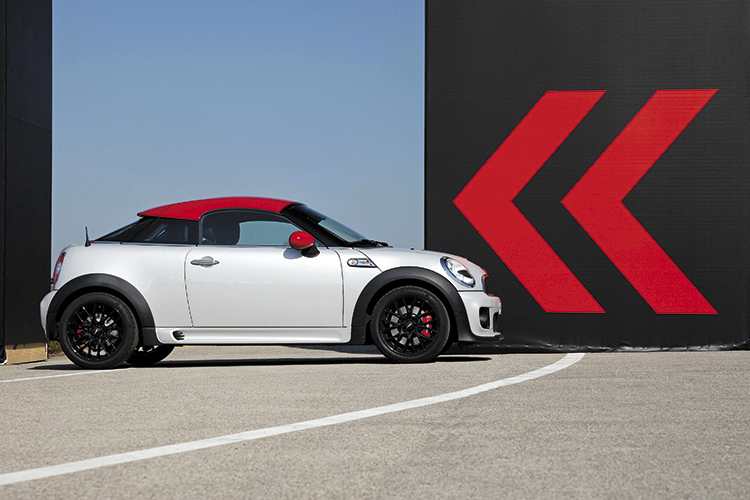 The vehicle is indeed agile, and a little wild. It grips like a vice, goes like a 1.2-tonne go-kart and roars like a rocket – all enjoyed in an expansive handling course laid out on a disused military airfield. Flying down the long runways and short taxiways, between the cones of the slalom sections, and on winding public roads outside, the MINI Coupe JCW really came into its own.

But the car is less effective as a cruiser. Equipped with 205/45 R17 ContiSportContact 3 SSR tyres, the ride is perfectly controlled over smooth tarmac but a bit bumpy over uneven ground, so much so that you need to fidget with the steering wheel to keep heading “straight”. 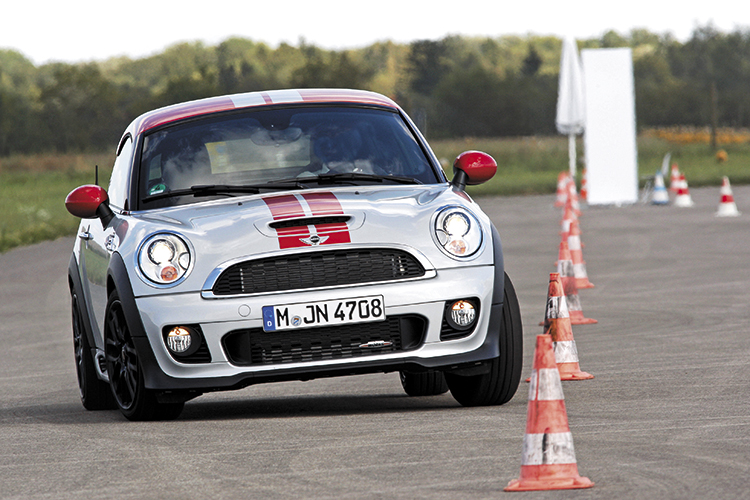 Specifying the hardcore suspension option (10mm lower, with ultra-firm damping) would be suicide for cruising comfort, we reckon. Wind noise at speed is not a problem, but there is a soft resonance from behind (exhaust muffler, run-flat treads, or possibly both) that might irritate occupants after half an hour of expressway motoring.

Interestingly, that drone is more noticeable from the driver’s seat – which means that the passenger will be hearing it most of the time in right-hand drive countries such as Singapore and Malaysia. 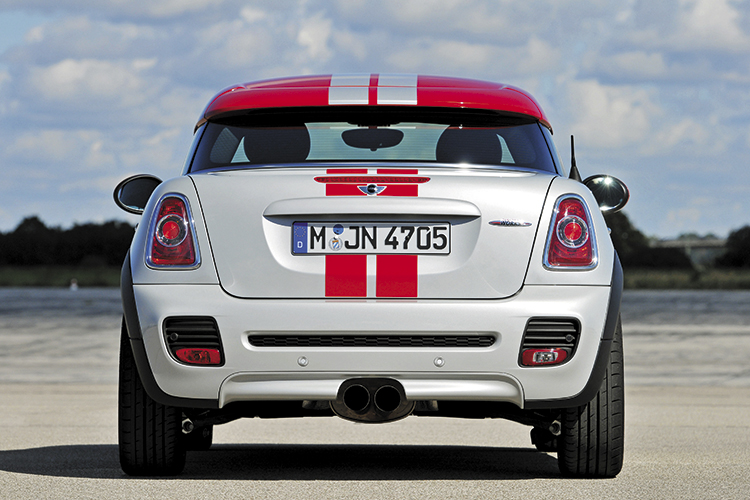 The Coupe’s driving position feels more purposeful than in the usual MINI hot hatch because of that hunkered-down roof and its “chopped” windows. The interior designer, Oliver Sieghart, said, “We want to show the two-seatedness.”

Well, the pair of seats are shown, clearly, with oval recesses in the roof liner overhead reinforcing this point. These “scoops” also allow helmets (or over-the-top headdresses) to be worn without them crashing into the ceiling. 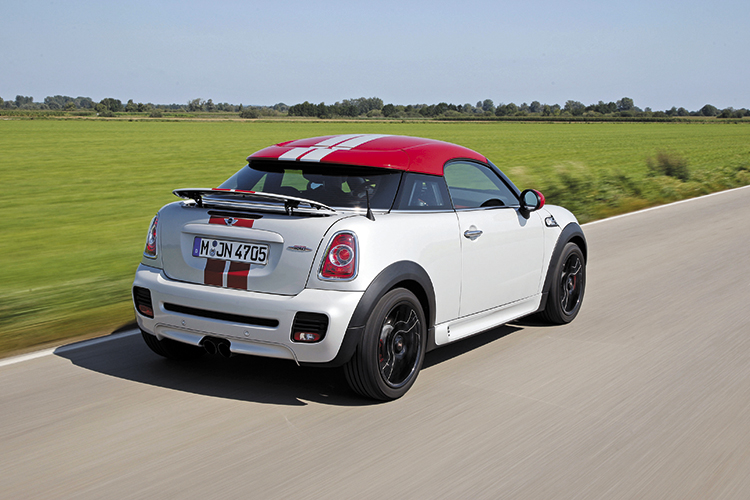 The dashboard layout and interior accessories are shared with the rest of the MINI line-up, but Toffy upholstery (a shade of brown) is unique to this model. Special, too, by MINI standards is the boot – it offers a useful 280 litres of cargo space, with a sizeable through-loading slot and a detachable two-piece cover (if the speedster-style parcel shelf is not attached properly, it wobbles on the move). Additional stowage is provided by a ledge behind the seats and decently sized door bins.

Come December, party animals in Singapore will have the MINI Coupe in their midst – assuming they choose it over a brand-new Peugeot RCZ or a second-hand Audi TT.

Check out the latest MINI 3-Door