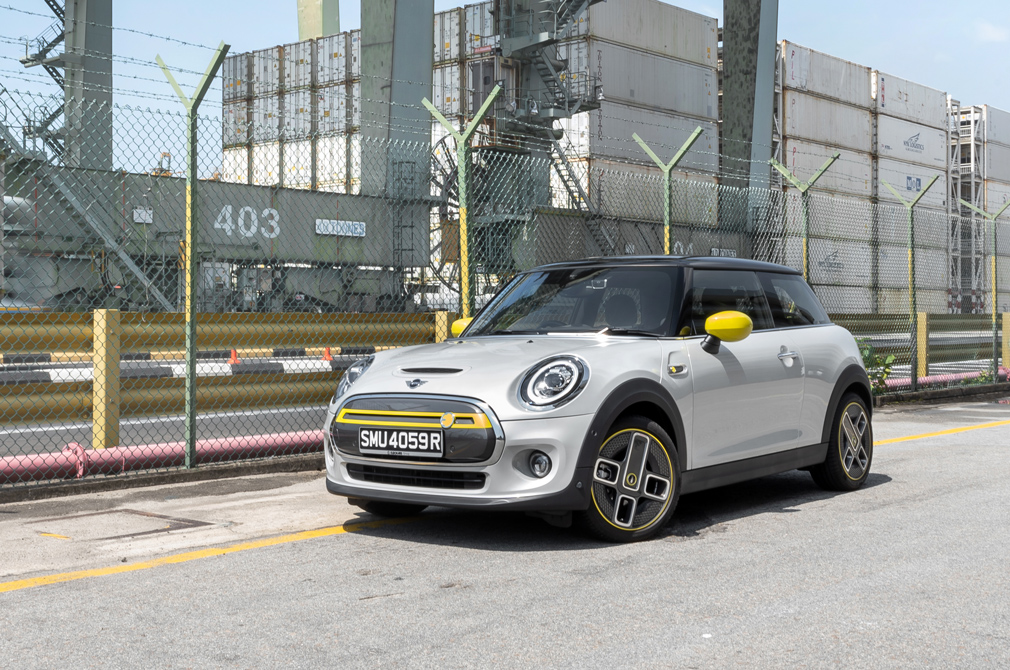 Once word was out that an all-electric MINI was in the works, the big question was whether it would display the same eager verve and bubbly character of its combustion-engined siblings.

After all, an appliance-like whine cannot stir the soul in the way the rort and howl of a good petrol engine can. And with the inevitable weight gain due to the heavy battery pack, would the MINI’s trademark agility be blunted?

We need not have feared, because the MINI Electric (let’s call it the MINI E) delivers even more laugh-out-loud driving fun than its fuel-burning stablemates.

Currently the MINI E is available only in the pert 3-door bodyshell, and is identifiable by a neon-yellow band across its blanked-off grille (since there is no combustion engine that requires cooling), wing mirrors in that same yellow, and 17-inch light-alloy rims with slots designed to mimic those of a three-pin wall socket.

There are also yellow-hued ‘E’ (for Electric) logos on the front grille, rear hatch and front fenders, this time styled to resemble a two-pin plug (can’t they make up their minds?). 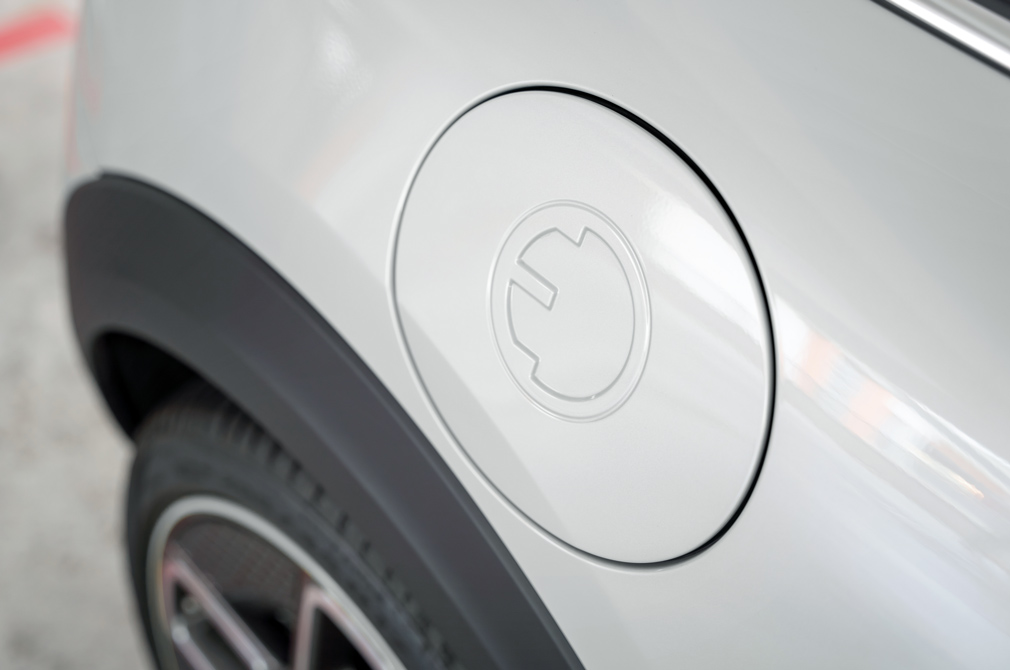 The motif is also embossed on the flap concealing the charging socket on the rear fender (where the fuel filler usually resides). Look really closely and you might notice that the car also sits a tad (18mm to be precise) higher than the typical MINI, to provide enough ground clearance for the batteries.

Inside, cabin and boot space are identical to that of the normal MINI 3-door – quite a feat, achieved by housing the lithium-ion battery bank in a T-shaped configuration running lengthwise down the centre of the cabin floorpan and under the rear seats.

Battery capacity is only 32.6kWh however – well below the norm. MINI claims a range of between 242-270km, but in real-world use expect 200km or less.

The fascia will be instantly familiar to anyone with MINI experience, except for the 5.5-inch oval digital screen in place of the usual round speedo (in addition to the usual 8.8-inch infotainment touchscreen in the big central roundel on the dashboard). 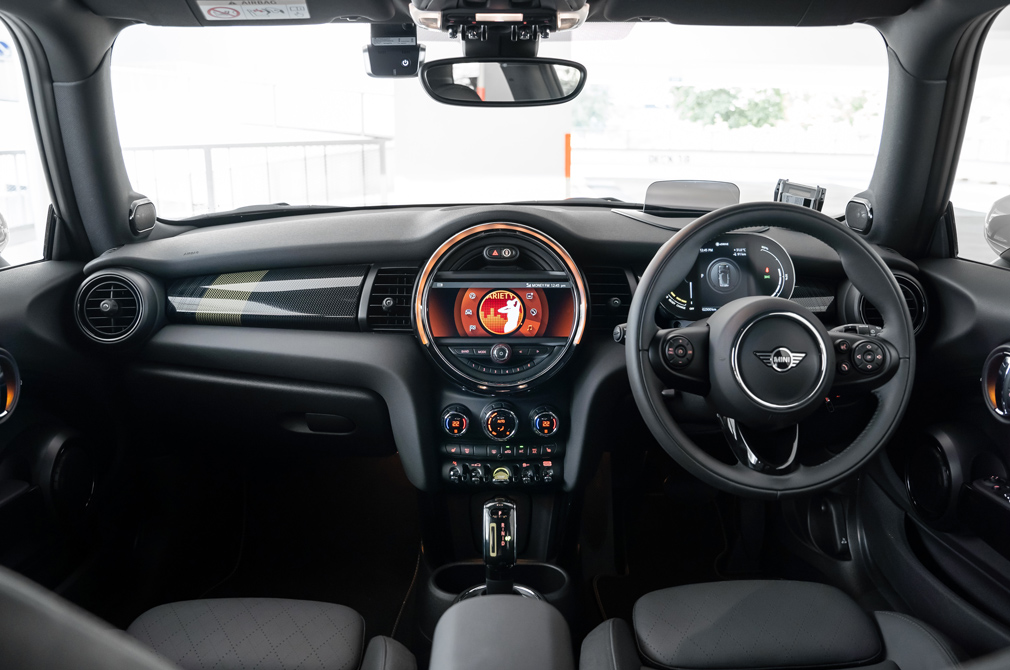 There is head-up display as standard, as well as a 12-speaker Harmon Kardon sound system for the audiophiles.

The MINI E also comes with a package called Driving Assistant – essentially a half-step towards autonomous driving, it employs cameras to (among other things) help maintain your speed and keep a safe following distance, informs you of the prevailing speed limit, dips and raises the adaptive LED matrix headlights automatically to suit the conditions, and warns you of pedestrians and road obstacles.

The stop-start toggle switch ahead of the gearlever is in neon yellow instead of its usual red, just to remind you what MINI you’re in. Not that you need reminding once you’ve flicked the car awake (“fired it up” isn’t quite appropriate anymore) and moved off silently. 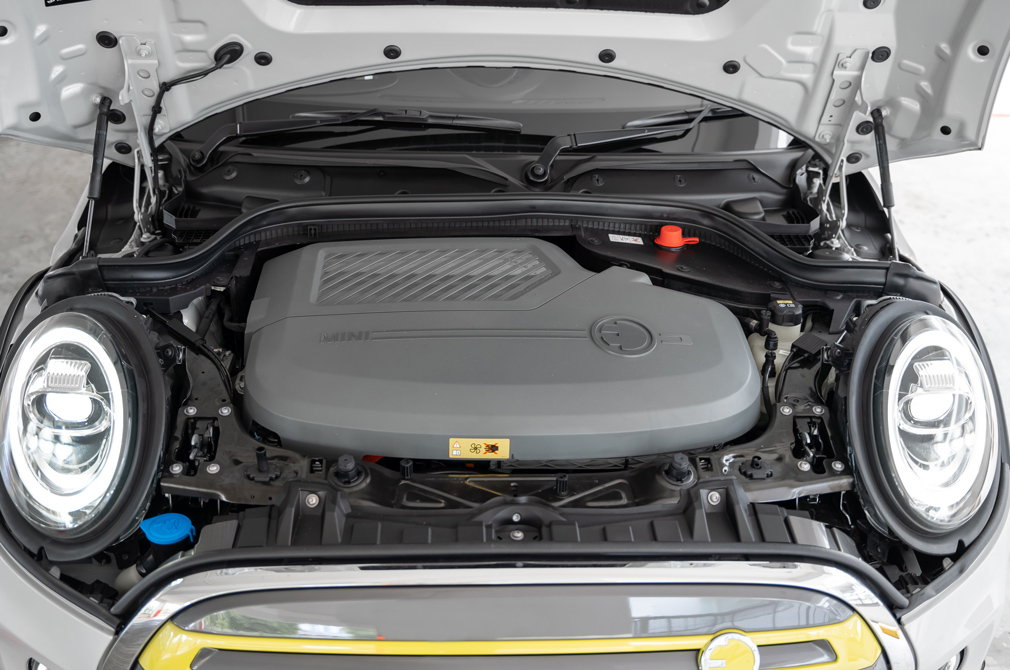 The MINI E’s output is rated at 184bhp and 270Nm of torque – close to the 189bhp and 280Nm of the Cooper S – but crucially, as with most other EVs, full torque is available the moment you pin the throttle, without having to wait for revs to climb, so it simply bolts off the line without pausing for breath.

In the stop-start world of urban driving, the instant, thumping urge makes the MINI E feel much swifter than its Cooper S sibling, despite its 7.3 second century sprint time being a touch behind the petrol car’s 6.9 seconds. Top speed is however just 150km/h, making this very much a car for cities rather than for crossing continents.

Despite all that torque giving the front tyres a hard time, wheelspin is amazingly near-absent – thanks to a clever stability control system which incorporates the wheel-slip limiter function directly within the electric motor’s drive system, for quicker response. 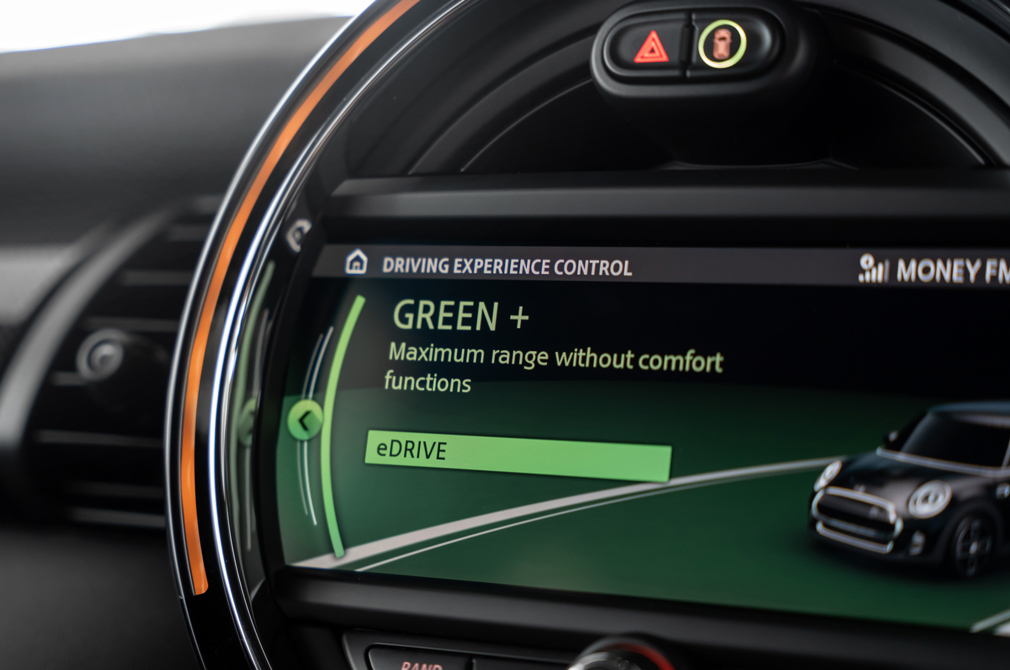 You can toggle through the driving mode menu as well if you don’t want the car to constantly behave like a rabbit on steroids. Work your way down through the modes from Sport to Mid, Green and Green+, to find your preferred level of throttle-liveliness and steering weight.

In common with most EVs, the motor’s energy-recovery function means that the MINI E slows significantly when you lift off the right-hand pedal – with some anticipatory driving it is possible to navigate urban traffic without ever having to touch the brake pedal.

It remains an alien sensation for many though – and recognising this, MINI allows you to switch off this regen-mode so that the car will still coast on a closed throttle like a non-EV.

Thanks to its power delivery the MINI E may feel quicker in town than the Cooper S, but around corners it is even more of a hoot. The MINI E is 150kg lardier, but thanks to the electric motor under the bonnet being much lighter than a combustion engine and gearbox, and the battery pack’s weight being concentrated low down and centrally, its centre of gravity is a full 30mm lower than that of the Cooper S, and its weight distribution is surely not far off that of a mid-engined sportscar. 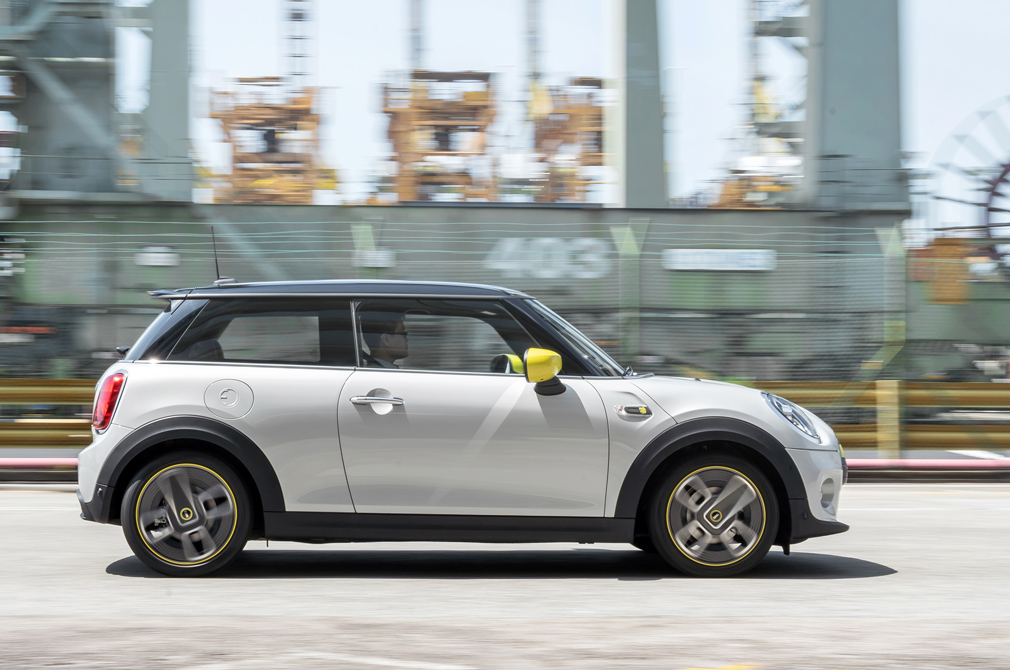 It shows, with the car hardly rolling at all and feeling brilliantly planted whatever type of bend you’re ripping through.

The quick-geared, well-weighted steering and kart-like agility are instant MINI identifiers and remain unblunted in the MINI E – the whole car is shot through with an endearing and infectious puppy-eagerness.

The MINI E has firmer springing than the Cooper S, to deal with the car’s extra weight. Consequently the car jiggles more over poor roads, but the ride nevertheless remains comfortable and well-judged.

The batteries’ limited capacity can be a bother though – in a full day’s driving it’s not hard to see the remaining range drop below 50km, and unless you have the luxury of your own wall-mounted charger at home, you will find yourself a constant visitor to the few public charging stations currently dotted around, although these will gradually proliferate.

That said, topping up the batteries is a tolerably quick affair – with a 50kW DC fast-charger, 80 percent charge is reached in 35 minutes, about enough time for a leisurely cup of coffee.

Somehow the electric drivetrain perfectly suits the youthful, cheery and adventurous mien of the MINI. If going green is this much fun, sign me up. 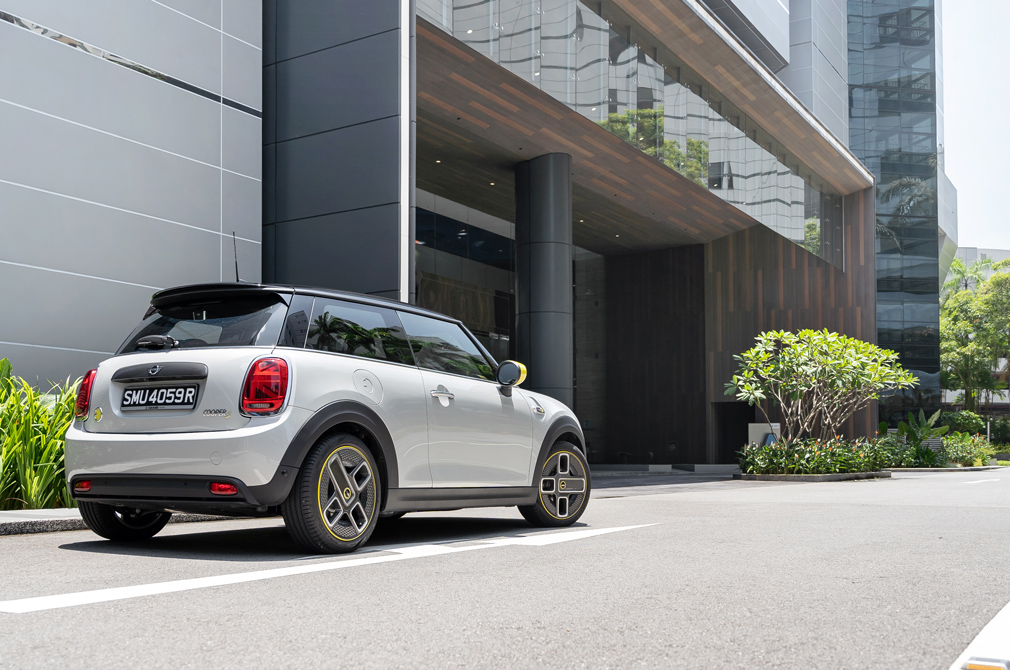