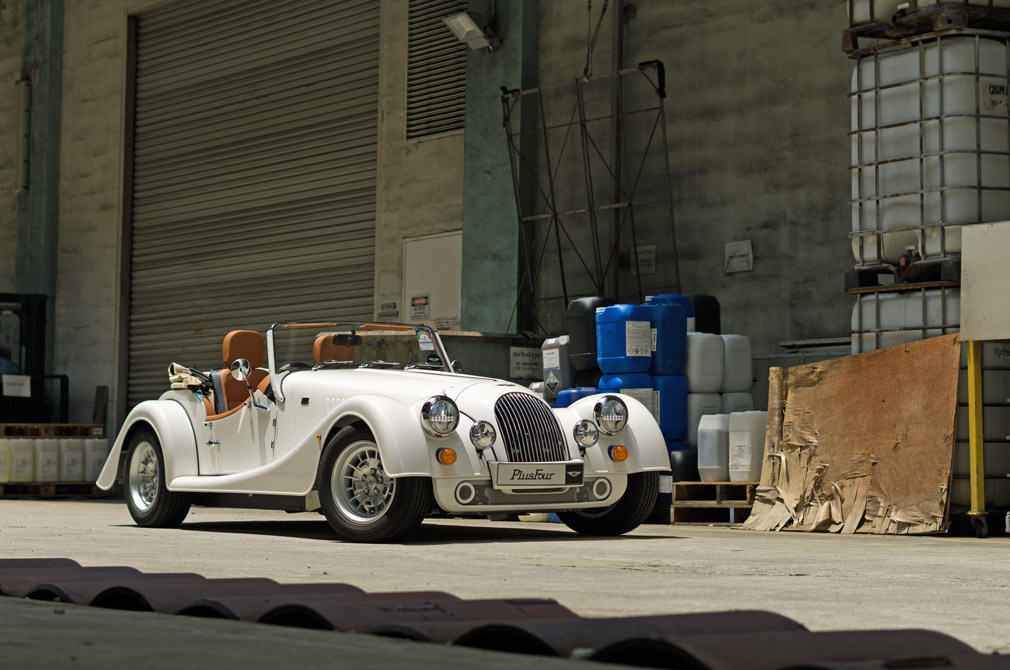 He had jettisoned his entire being from his Boring Blue BMW 216d Gran Tourer and was now standing in the middle of Dunearn Road. The man gave me two thumbs up with a vigour that suggested approval so intense he wished to project it in an actual energy blast.

Throughout the entire weekend, I have been the epicentre of an absolute avalanche of smiles, curiosity and sheer beaming goodwill. Little wonder, for the brilliant white Morgan Plus Four that I am burbling around in exudes specialness from every inch. 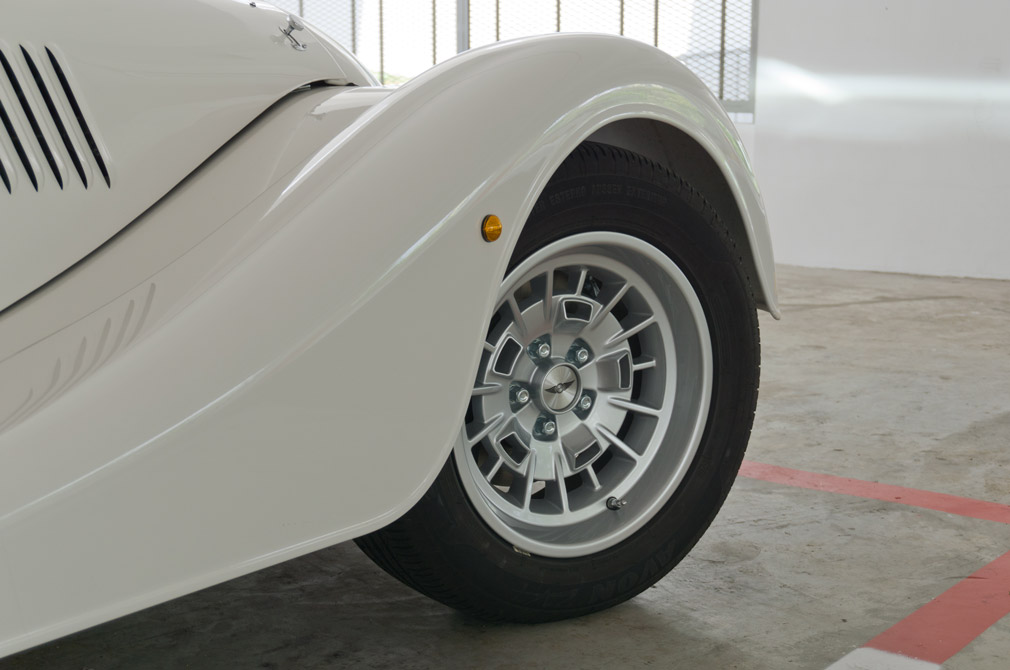 Few things bring cheer better than a car that harkens so vividly back to the “good ‘ol days”.

Yet even this millennial whippersnapper cannot help but be seduced by the idea of a world with tweed sport coats, pretty flowers in the windows of stone cottages, and the complete absence of Mark Zuckerberg.

If one did not know better, one would genuinely think this gleaming, splendidly detailed, hand-built sculpture of metal, wood and aromatic leather is the world’s most well-preserved 70-year-old classic.

Until the curious rubbernecker catches sight of the digital BMW gear wand sticking out of the centre console.

The sights and sounds of the 1950s may have been wonderful, but they often also included the aroma of a steaming, broken engine and leaking oil. 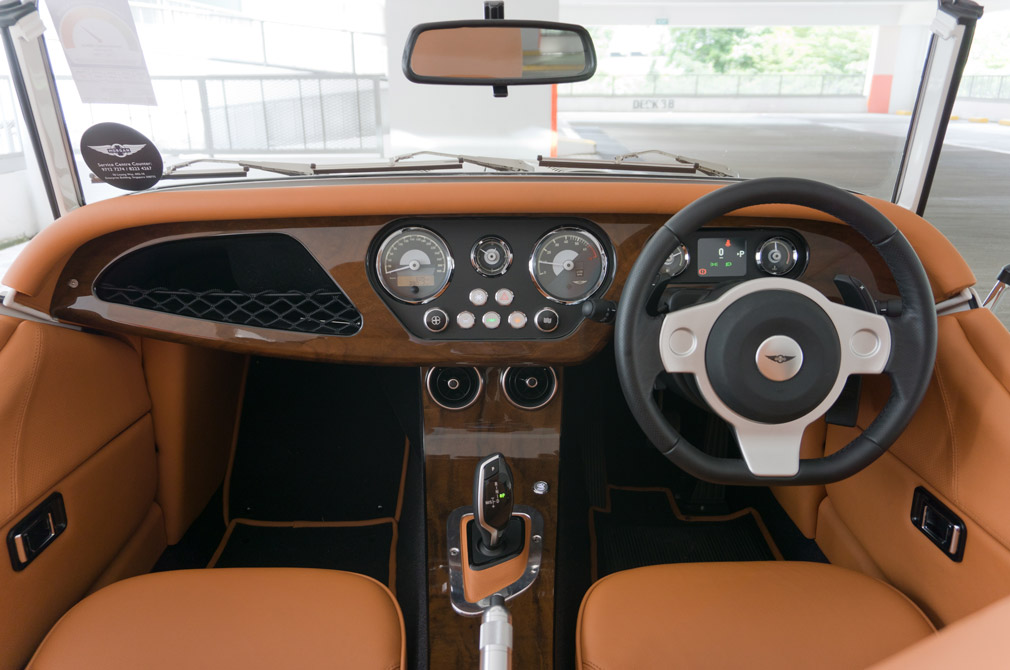 Thankfully, there are no signs of these in the Plus Four. Underneath its period pageantry are thoroughly modern mechanicals. All of the charm, none of the pain.

The aluminium chassis is a proprietary Morgan design, the result of years of painstaking engineering. For propulsion, the Plus Four sports the oily bits from a factory fresh BMW 430i – a B48 TwinPower unit mated to a ZF 8-speed automatic.

Here, the mask of period accuracy slips slightly with the multitude of turbo wastegate whistles and inescapable hint of hesitation inherent to all such engines. The rewards are well worth it, however, not just in terms of dependability, but also performance.

With only 1009kg to push against, the 255 turbocharged 21st century German horses make the Morgan fast with a capital F. There are a couple of ways in which this faintly alarming sensation of speed is enhanced.

First, there is the knowledge in the back of your mind that ABS aside, there are no electronic aids to speak of.

Your right foot is the traction control, and grip is yours and yours alone to conduct. Sitting directly over the driven rear axle, it’s a point that is made with exhilarating clarity. 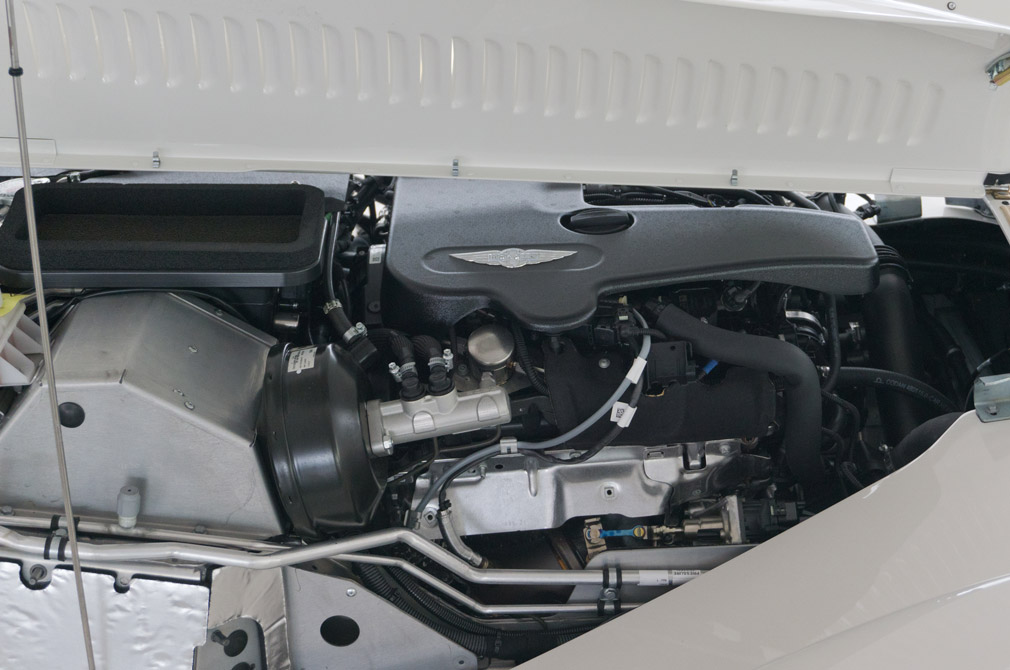 Secondly, there is no new convertible in the market with this little bodywork around the passengers. Heck, the tops of the door sills are so low you could literally reach over and brush the tarmac with your fingertips.

As for the A-pillars, they are the width of toothpicks. Best not to roll this beast, then.

Becoming exposed is something that takes a bit of work. Patience and dexterity are critical in performing the multi-step origami process of opening the soft-top, which is best approached in the safety of a covered garage.

That’s because the window panes must be unscrewed, removed and awkwardly stowed behind the seats – which eats up every last bit of cargo space. The only plus is you get to better savour the exquisite detailing as you walk around the car.

By Sunday, I had gotten my roof-lowering time down to under two minutes (booya). 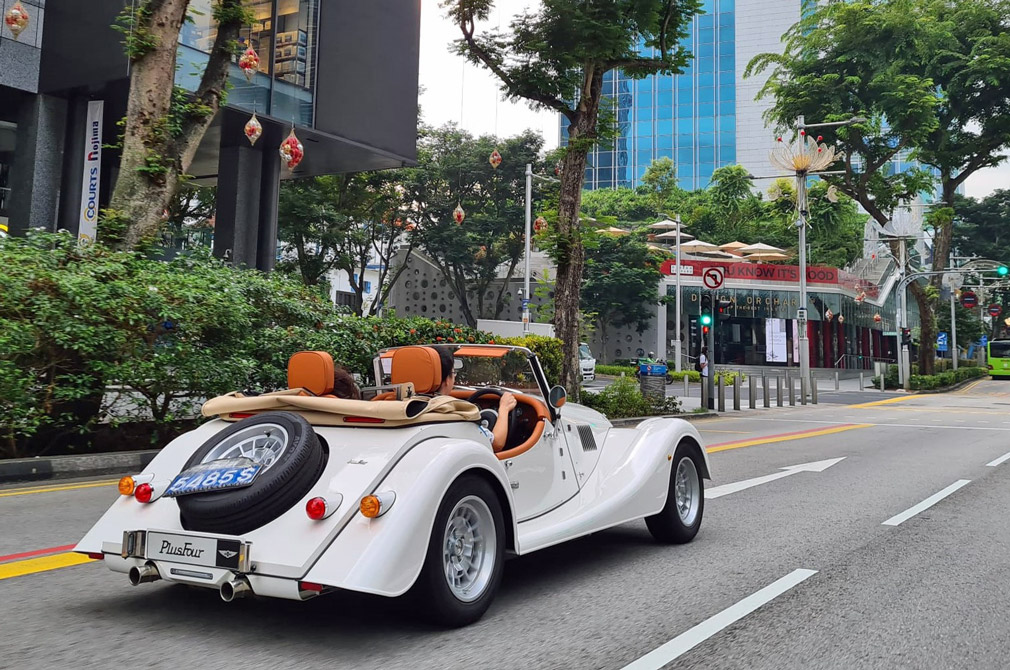 Sun up, roof down, grin out. Driving the Morgan means saturating yourself in not just rich mechanical sensations but also the world at large.

If the environment is seen through the prism of Photoshop, the Plus Four takes the colour saturation slider and amps it up to 11. Everything becomes much more brilliant sitting behind the long, ribbed bonnet.

Simple, but beautifully trimmed instruments lay in luxurious wood below your eyeline. The verdant aroma of indulgent, luscious leather wafts to your nose.

As for everything beyond what little car there is? It’s a full-on IMAX immersion.

The Morgan Plus Four sprinkles the roads, tress, buildings and birdsong with extra flavour, while sending pulses of unadulterated driving texture straight through your bum.

The steering is not quite so candidly talkative, but when you can watch the dramatically flared wheel arches arc left and right under your command, it does not diminish the experience much.

The way the Plus Four feels when it changes direction in anger is defined by its bum-over-rear-axle, huge-distance-to-front-axle seating position. 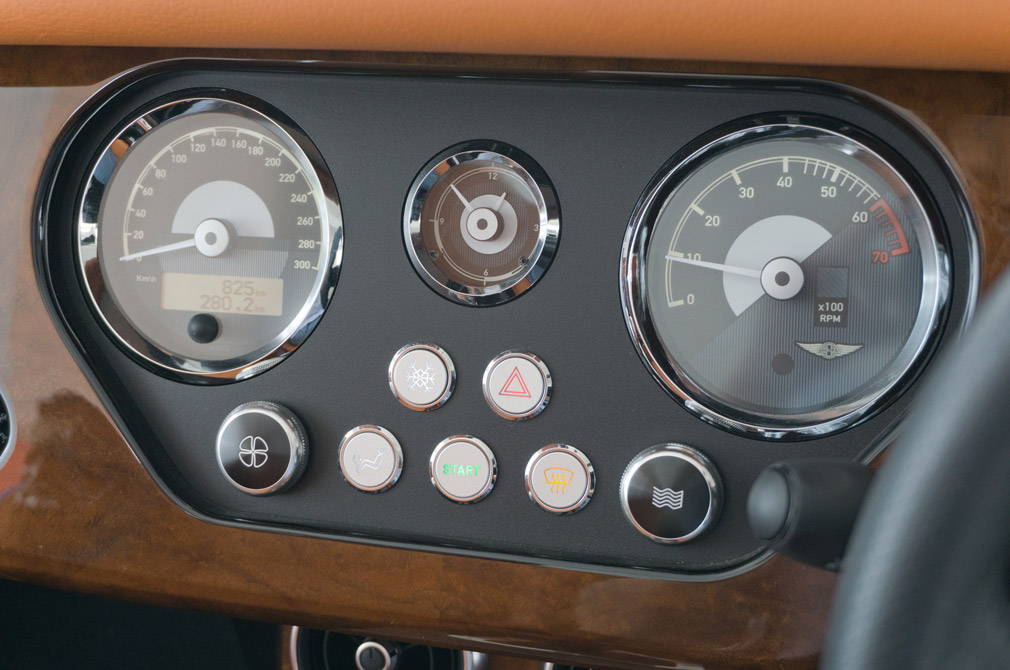 One wrenches the relatively unburdened front wheels while the rest of the car skips along in tow. There’s a reassuring tautness to the steering responses and communication is naturally absorbing for a machine that submerges you so vividly in your relationship with the road.

Hence, the line overlaid on the coming tarmac by your brain can be followed reasonably well, as long as you treat the chassis’ limitations with respect.

Never quite as capable of distributing grip evenly between all four wheels as a Porsche 718, nor inhaling imperfections as deftly as an Alpine A110, the Plus Four needs attention and coaxing to stay true and honest.

It certainly will not scalpel its way through a series of corners as unflappably as serious, purpose-built track machines. 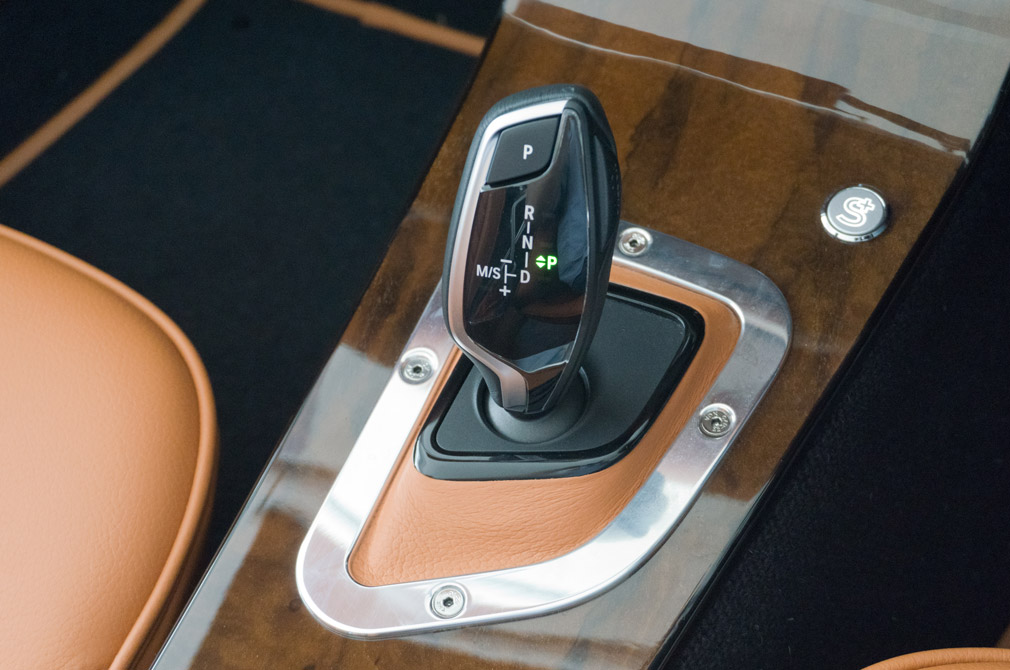 If a Lotus Elise is a stern-faced SAS soldier (all precise moves and merciless headshots), then the Plus Four is the Hollywood version of said commando. Think Tom Cruise with jazz hands.

For a car whose remit is to be marvellous even at canter, that extra involvement needed to manage the mechanicals only adds to the immersion and is actually very welcome indeed.

There are dynamic sensations and a type of refreshingly honest, simple fun rarely available in our ever more sophisticated sporting machines these days.

But pilot the Plus Four at the right level of commitment and it is a hoot and a half. The car eggs you to burble along contentedly between squirts of laughter-filled sprints.

Why? Because, why not? It’s huge fun. This is special. So special. The Morgan Plus Four is pure charm, pure romance.

There are a lot of exotic machines out there. Ferraris, Lambos, Bentleys and the like. They all make wonderful representations of themselves. The Plus Four makes a spellbinding representation of the entire world. 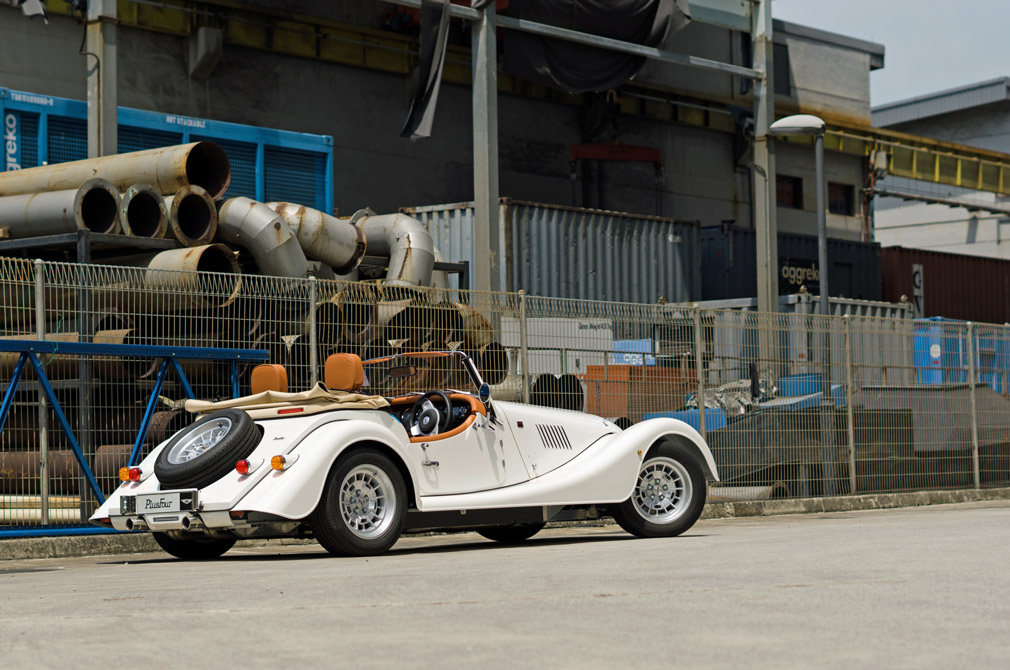