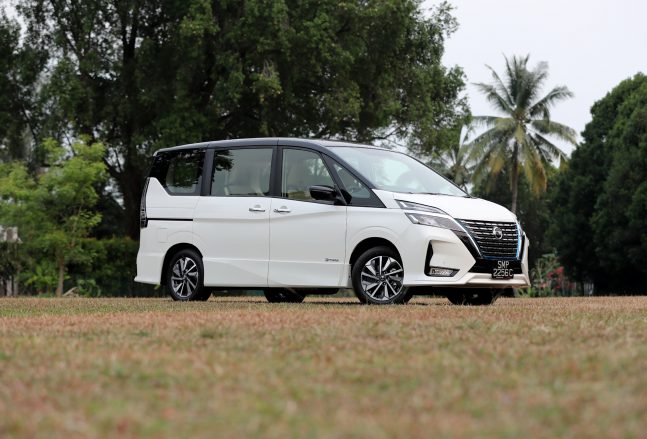 The boxy Nissan Serena e-Power is one of the coolest-looking MPVs on the road now.

The new Nissan Serena e-Power is one of the squarest cars in town, yet it easily qualifies as one of the coolest.

The seven-seater with van-like sliding doors is a petrol-electric hybrid with a twist. Its front wheels are driven exclusively by a 100kW electric motor.

The motor is powered by a lithium-ion battery which never runs dry. This is because it is charged by a 1.2-litre petrol engine, which acts solely as a generator (with no connection to the wheels).

What this means is the Nissan Serena e-Power is an electric car – for all intent and purpose – but one without range anxiety.

On a full tank, the multi-purpose vehicle (MPV) will cover around 500km, which is more than what most electric cars are capable of. And because electric motion is more efficient than burning fossil fuels, the Nissan gets an economy of 5.7 litres for every 100km, which is respectable for a full-size MPV.

In Eco mode, which is the optimal way to drive this car, the Serena e-Power allows one-pedal driving, like most electric cars. That is, once you lift your foot off the accelerator pedal, the car goes into power recuperation mode, which slows the vehicle down as if you were depressing the brake pedal gently.

With practice, you will be able to drive the car without having to touch the left pedal.

In this mode, you can choose to maximise battery charging by pressing the charge button on the dash.

When activated, this replenishes the battery in double-quick time, although the last 10 to 20 per cent still takes a long time (not unlike the behaviour of lithium-ion batteries in other cars). Otherwise, recharging takes place whenever you decelerate or brake. 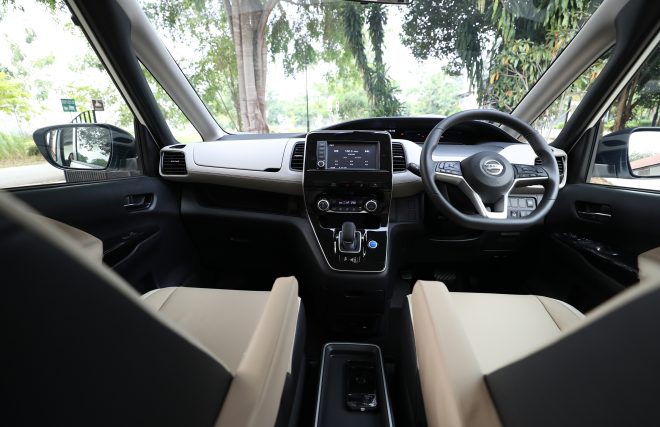 The interior of the Nissan Serena e-Power MPV.

Unlike conventional hybrids, the Serena e-Power’s engine does not contribute directly to propulsion. As such, the car’s performance does not benefit from a dual power source.

But most hybrids do not have as powerful an electric motor as the Serena. With 100kW at its disposal, the motor is quite capable of delivering the multi-seater with a measure of promptness, although you would never describe the car as sporty.

This animation below from Nissan shows a simplified explanation of how the e-Power system works:

In most driving situations, the petrol power plant is engaged (like in most hybrids). It is only under very light-load conditions – such as crawling in a carpark – that the engine is dormant.

But you can choose to deactivate the engine by pressing the Quiet button on the dash. This way, the car will run on electric power for up to 3km without engine intervention.

This option is also available in other hybrids. But it is uncommon in an MPV – and a pretty competent one at that. As a family transporter, the Nissan Serena e-Power has few equals.

On a full tank, the multi-purpose vehicle (MPV) will cover around 500km, which is more than what most electric cars are capable of

It has power sliding doors on both sides. These doors can be activated by a tug on the handles, pressing buttons on the said handles, activating another set of buttons in the cockpit, or a hands-free method of “kicking” the underside of the car.

An illustration of the seven seats inside the Nissan Serena e-Power.

Access to the third row is easy because there is a wide aisle in the second row. The third-row seats can be flipped aside easily to free up space big enough to accommodate a full-size bicycle standing up.

A barn-size tailgate can be opened in two stages, like in luxury sport utility vehicles (SUVs). This will come in handy in tight parking spots. 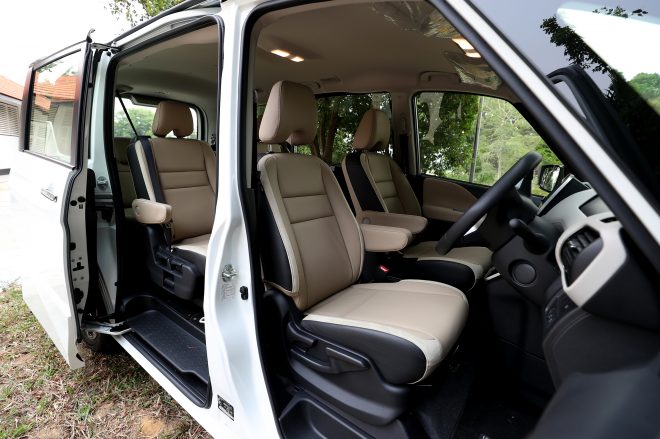 The powered sliding doors of a Nissan Serena e-Power can be activated by a tug on handles, pressing buttons on the said handles, activating another set of buttons in the cockpit, or a hands-free method of “kicking” the underside of the car.

At the wheel, the Serena e-Power is pleasantly driveable. The ride is properly cushioned, body roll well within tolerable limits, and the car is decently agile. Quite commendable really, for a carriage which is taller than most SUVs (read: plenty of headroom inside), and which is just a mite smaller than the enormous Toyota Alphard.

The only slight irritation lies within the cruise control program. It forgets the preset speed after a very short spell. Strange but true.

This aside, the Nissan Serena e-Power is a peachy number – highly recommended for folks who want the space and versatility of an MPV and the frugality of a compact.

Being square has never been so cool.

Nissan commits to electrifying all cars by 2022; Leaf and Serena e-Power to launch in 2019