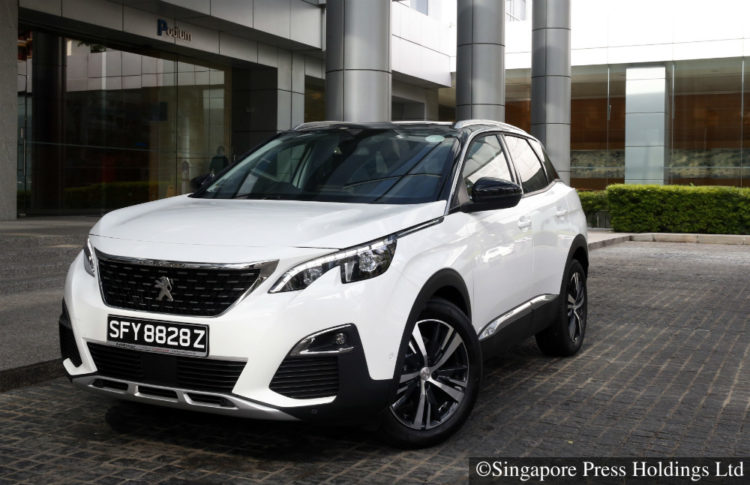 Five months after Peugeot released a turbo-diesel version of its 3008 crossover, the petrol version has arrived here.

With diesels likely to face sizeable tax surcharges when a new emissions scheme takes effect in January, the petrol-powered Peugeot 3008 is the only sensible bet.

Now, you would expect a petrol model to offer less verve and enthusiasm than a diesel one. We have all been told that diesels pack a lot more torque per cubic centimetre, haven’t we?

Well, that is true if you compare a turbo-diesel with a non-turbo petrol. But the latest turbocharged petrol engines have narrowed the gap significantly.

The petrol-driven Peugeot 3008 is also able to rev a lot higher and produces 43bhp more than its diesel equivalent.

On the tarmac, this translates to a century-sprint time of 8.9 seconds, versus 12.7 by the diesel. Top speed is a more respectable 206km/h, versus the diesel’s 184km/h.

Now, the Peugeot 3008 turbo-diesel is by no means a sloth. At the wheel, it often feels quicker than its specs suggest. But the petrol variant is so much punchier. It has no problem keeping up with the pack and, in fact, is often well ahead.

Its free-breathing engine is a joy to behold – it goes on forever, has very low vibrations even beyond 5000rpm and sounds pretty good for a 4-cylinder.

If you are in a hurry or merely in the mood for speed, the 1.6 e-THP is a far better choice.

The Peugeot 3008’s chassis relishes the palpable power hike. Despite its relative tallness, the car always feels at ease with hard acceleration, braking and cornering. Its steering is sharp and relaxed and, like the diesel, there is surprisingly very little body movement to contend with.

At lower speeds, it is every bit a winner, like its diesel twin, only more refined. No matter how well made or how well insulated a diesel is, you can always make out the tut-tut-tut chatter at idling, especially when you are outside the vehicle.

But with a petrol, there is none of that. There is less vibration too.

All the other reasons that make the Peugeot 3008 a solid buy remain: It is extremely well put together, with fine attention to detail and tasteful execution of visual and tactile elements.

Its equipment level is pretty high too. Contactless phone-charging, lane-keeping assist, tyre pressure monitoring and driver attention warning are just some of the high-tech goodies.

Peugeot, however, is still insisting on its dated cruise-control function. This fob-like gadget hidden behind the steering wheel that feels like a flattened mouse is just unintuitive. Happily, you will not be tempted to use it because the Peugeot 3008 is such a joy to drive on your own.

In fact, the car might even be an alternative to Volvo’s highly attractive XC60.

It may not have as strong a brand appeal, but on many fronts, the French is almost as sweet a deal as the Swede.

Driverless Peugeots to hit the road in September