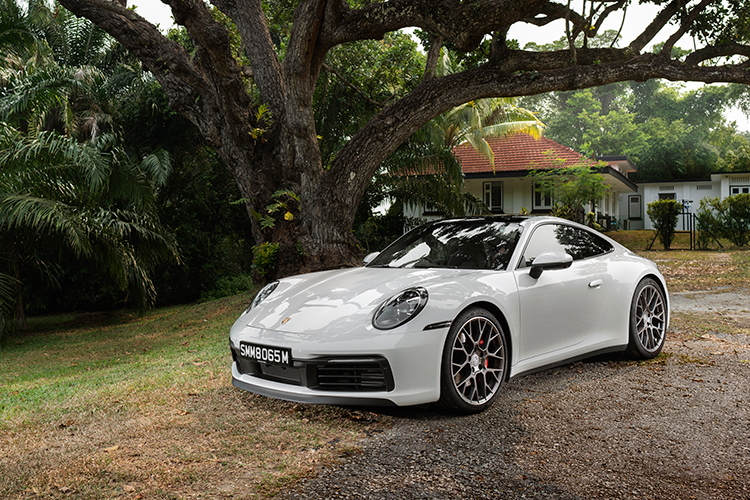 Whenever Porsche launches a new generation of 911 models, everybody jokes that the car “still looks the same”.

Those critical of the 911 are just as quick to say that Porsche is taking enthusiasts for a ride. They claim that the car is essentially unchanged.

Well, it doesn’t matter how much fun they poke at it. To 911 aficionados, the familiarity and similarity are precisely why they love the model.

Rear-engine, rear-wheel-drive, and in the case of the Porsche 911 Carrera 4S, all-wheel-drive. These layouts are what fans have come to expect. 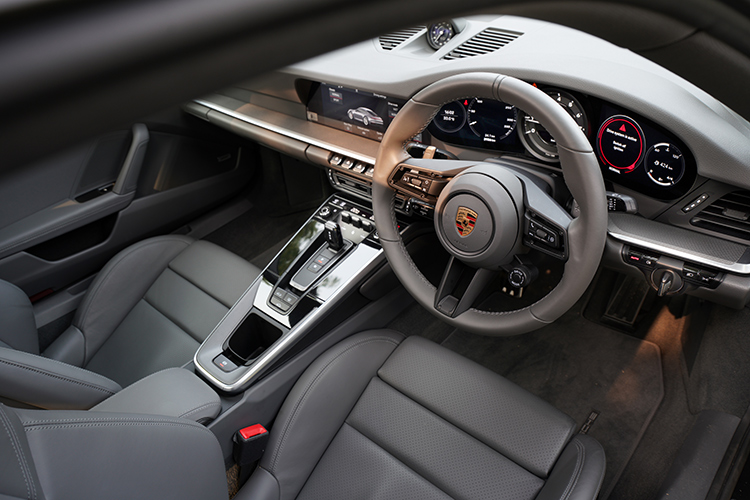 THE DESIGN HAS CHANGED.

Yes, the design of the Porsche 911 has changed. Subtly. For starters, all models now have the wider rump and track. These traits used to be specific to the Porsche 911 Carrera 4 models.

Compared to the previous model, the 911 is 20mm longer overall, but its wheelbase remains identical.

You’ll be hard-pressed to tell the front-end of the new Porsche 911 Carrera 4S apart from its predecessor. But it is different, really. 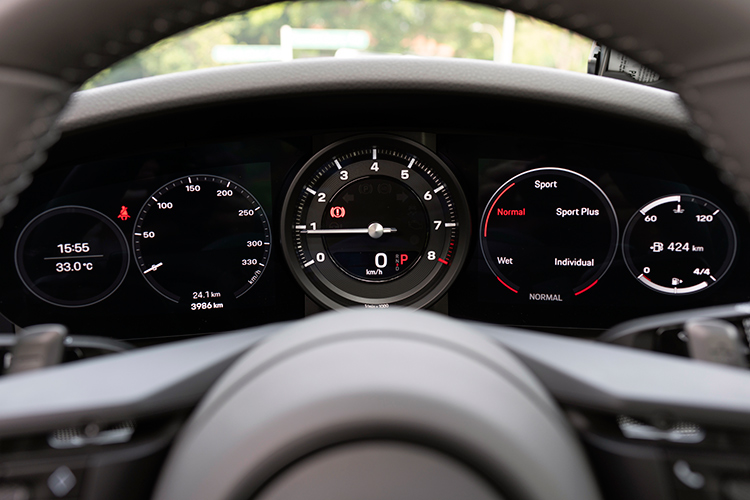 The rear end is the same. Keen-eyed observers might have noticed that the licence plate is now lower than before.

Yes, the vertical fins above the engine cover are carried over from the previous (facelifted) car. I prefer the horizontal ones, though.

But unmistakable are the slimmer tail-lights and that striking light bar that runs across the rear.

BIG CHANGES INSIDE, TOO.

I’ve driven a few 911s in my career. But what never ceases to impress me is how familiar the cockpit feels, despite the numerous changes inside.

In the Porsche 911 Carrera 4S, I feel right at home with the seating position. I love the nearly vertical angle of the steering wheel, the way the pedals are presented, the ways the seats feel… 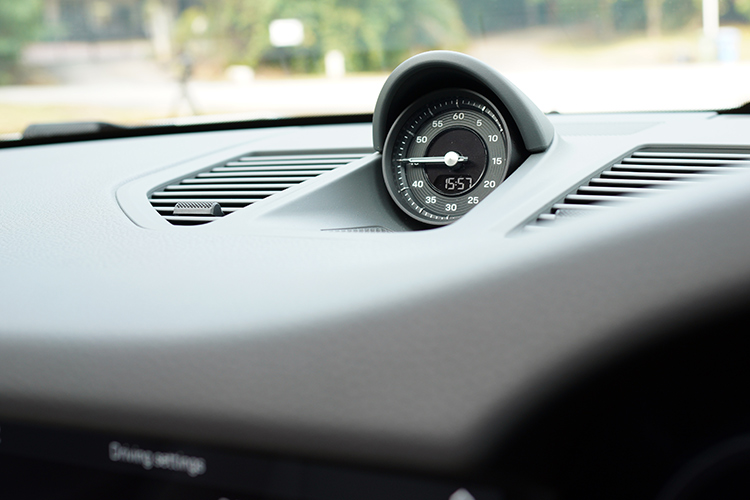 However, I notice the new digital instrument panel. Instead of having five analogue dials, there are screens on either side of the analogue tachometer.

That’s probably a nod to the old-school Porsche 911 fans.

These screens display a wealth of information that includes navigation. But the steering wheel does block of some it. Especially the fuel gauge, which is quite crucial.

I found myself purposely leaning to the left to check on it. 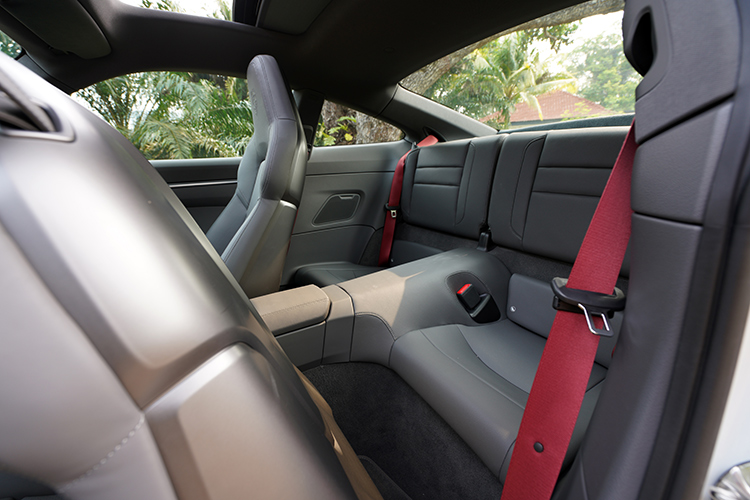 The new Porsche 911 4S seems more practical, too. For instance, there are bottle holders on the doors (I don’t recall those before).

The Porsche 911 Carrera 4S cockpit is also much neater. There are fewer buttons. Some of the functions that used to be on the centre console have become tabs sitting below the large infotainment screen.

Meanwhile, the rest of the functions, such as stop-start and sports exhaust, are now virtual buttons inside said infotainment system. Not exactly inconvenient, but something you’ll have to learn to live with.

New, too, is the gearshift lever. It’s now a stubby tab. Now this is something I can’t get used to. Over three days, I found myself missing the larger lever in the previous Porsche 911 Carrera 4S. 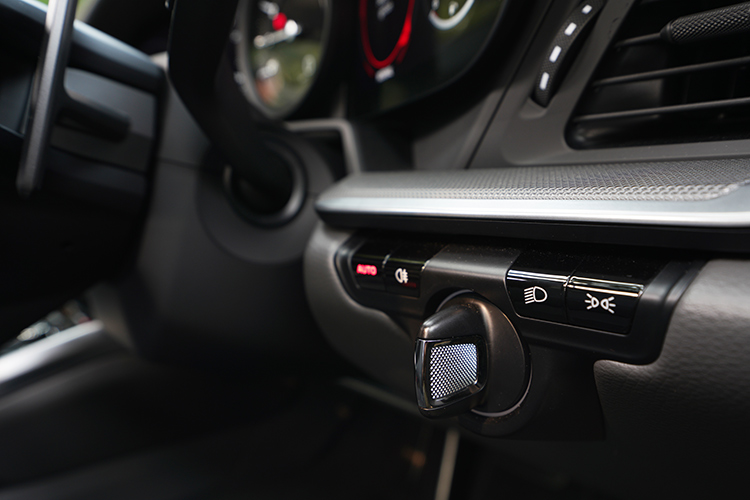 But I like the keyless ignition. While I don’t mind fishing the key from my pocket to insert and twist, this is just more seamless.

Unchanged, though, are the pitiful rear seats. I took one look and started laughing. Why are they even there?

I imagine most Porsche 911 owners would delete those as they customised their car.

LOOKS THE SAME = DRIVES THE SAME?

Well to that I say yes. But also, no.

As I turned the ignition and heard the 3-litre flat-6 in the Porsche 911 Carrera 4S roar to life, I was awash with emotion.

My heart beat a bit faster (okay, a lot faster). My breathing quickened. My throat went dry and hundreds of butterflies flitted about inside my stomach.

Then a smile spread across my face. 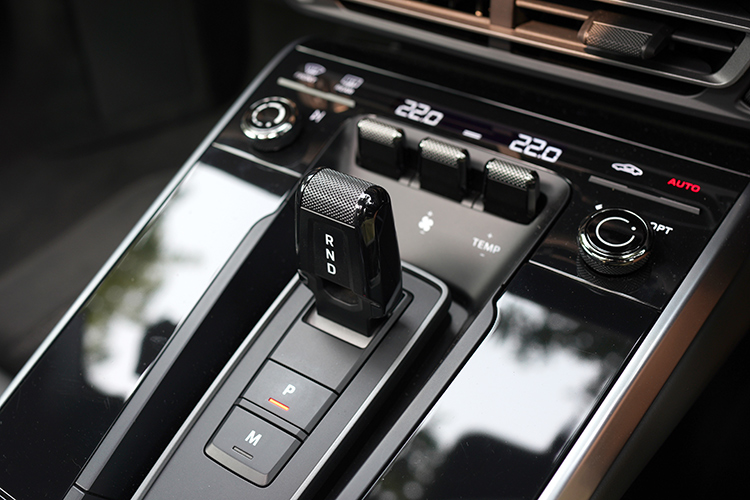 That very act of firing up the motor was like a signal. I heard the car saying, “Go on. See how I respond to your touch.”

I did not need a second invitation. Exhaust flap open, drivetrain in Sport Plus and gearbox in manual model, I set off.

The sensation of being pushed in a rear- or mid-engine car, is far more intoxicating than being pulled by a front-engine one. It’s hard to explain, but you’ll know it when you feel it.

The power is another thing. The Porsche 911 Carrera 4S has a turbocharged 3-litre flat-6 that punches out 450hp and 530Nm. That’s as many ponies, and just 20 Newton-metres less than the previous 911 Carrera GTS. 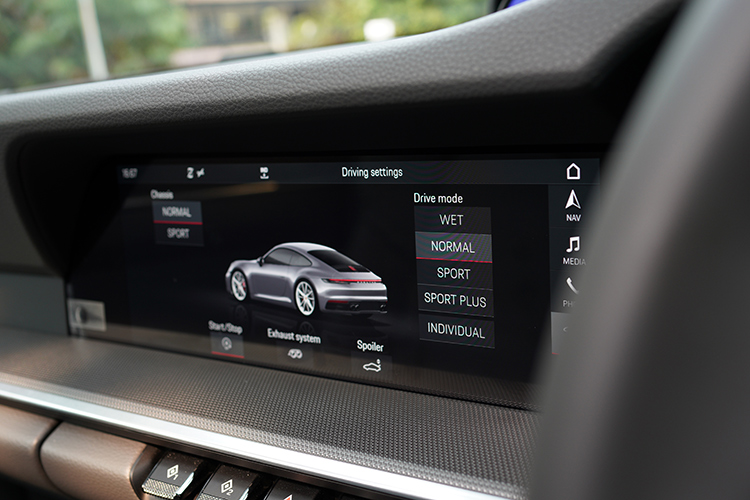 With all-wheel-drive, the Porsche 911 Carrera 4S is even quicker than the older 911 Carrera GTS. It clocks a century sprint time of 3.6 seconds, whereas the GTS does it in 3.7 seconds.

Equipped with the Sport Chrono package, like this test car, the zero to 100km/h time drops to 3.4 seconds. That is quick.

IT’S NOT JUST ABOUT SPEED…

Apart from being fast, the car is also very responsive. The gearbox feels like it’s controlled by my thoughts, not my fingertips.

Handling-wise, the Porsche 911 Carrera 4S is even more eager than before. With that wider front track, it feels even stickier as you enter a corner.

It feels like it’s tacked onto the road, and dares you to push harder. Sigh. If only I was on a racetrack! 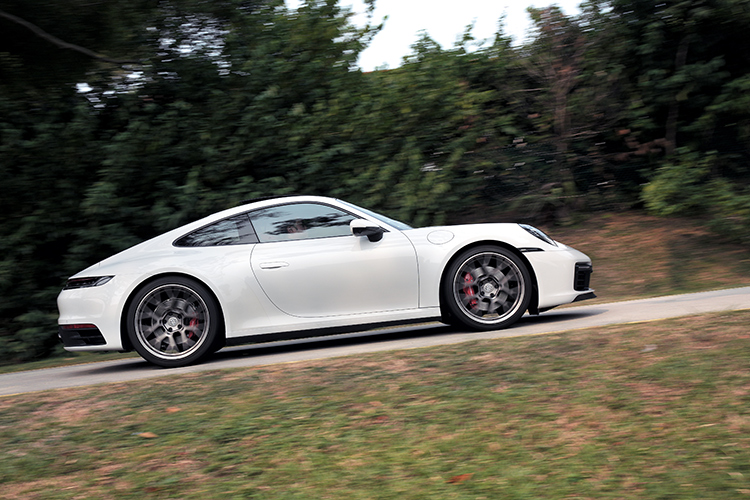 Then there’s that soundtrack. With the sports exhaust, the roar from the flat-6 is particularly awesome as the tacho needle flicks past 5000rpm.

The stability you get from the rear-end is another thing. With the motor’s weight pressing down on those wider, 21-inch rear tyres, you’ll never be short of traction.

That said, I’ve always wondered why anybody in a tropical country would buy a Porsche 911 Carrera 4S. You don’t need all-wheel-drive because there’s more than enough mechanical grip to begin with.

IT’S THE HANDLING, TOO.

Now, it’s not just the traction that dares you go to quicker. It’s the confidence you get from the responsive chassis, which dials you in to what the car’s doing.

The fact that the brakes are strong and progressive add to that confidence as well. And for an all-wheel-drive car, the Porsche 911 Carrera 4S actually feels more like a rear-wheel-drive one. 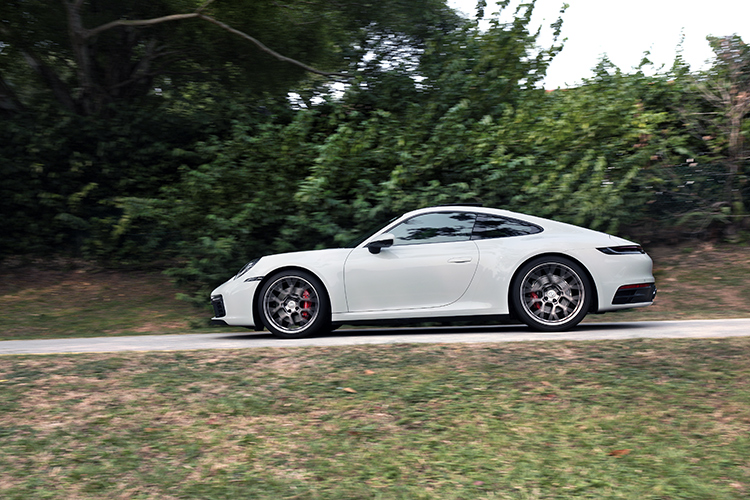 Since it hadn’t been raining when I had the car, most, if not all of the power was only transmitted to the rear wheels. The car only engages the front wheels in slippery conditions, as and when additional traction is needed.

And the steering. I thought that electric power steering units could never feel right. This comes pretty close. There’s heft to it. It’s precise and responsive.

Basically, the Porsche 911 Carrera 4S makes one look and feel like a hero. If there’s one big drawback, it would be that you don’t have to work hard to look good behind the wheel of a modern 911. 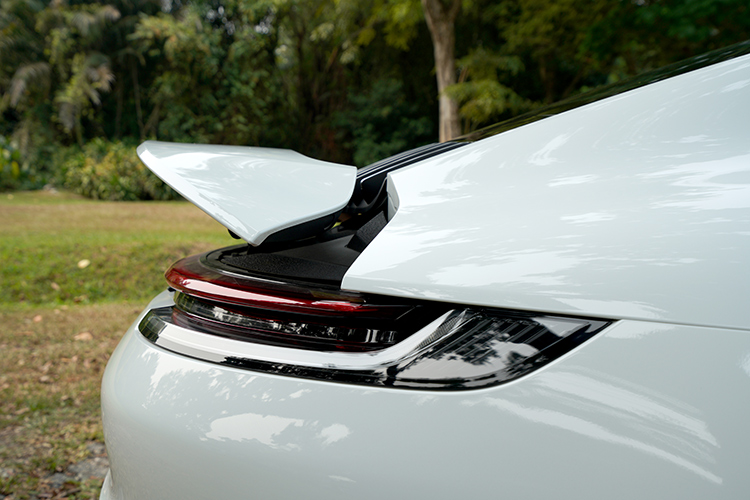 Then there’s the fuel consumption. After three days, more than half the fuel tank had been depleted. In my experience, that’s as much as what a 911 Carrera S and its naturally aspirated 3.8-litre flat-6 would drink.

The Porsche 911 Carrera 4S is an incredibly accomplished sports car. To its performance and handling, it also adds a greater degree of stability and (gasp) an improvement in ride comfort.

Sure, it is firm. But you don’t get all jiggly over pockmarked surfaces, which seem to be the norm now in Singapore. 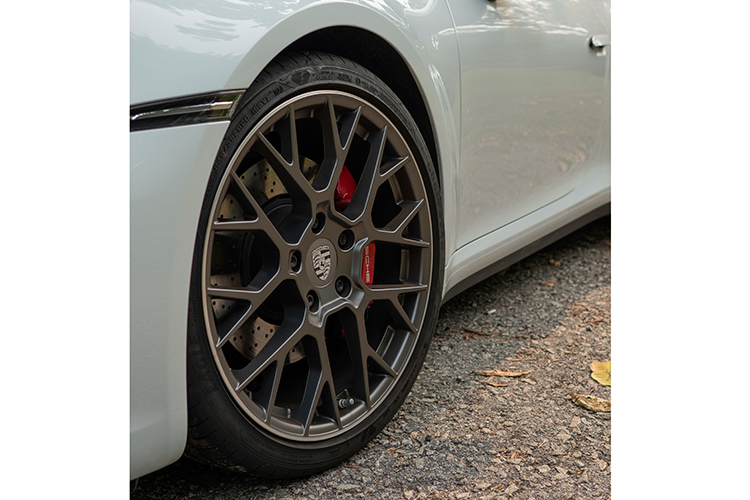 The way the Porsche 911 Carrera 4S responds to your touch and communicates with you are its strong points, along with that familiarity when you’re behind the wheel.

As I finish this, I’m reminded of a line from the song One Headlight by The Wallflowers: “Man I ain’t changed, but I know I ain’t the same.”

It just about sums up what the Porsche 911 is all about then. 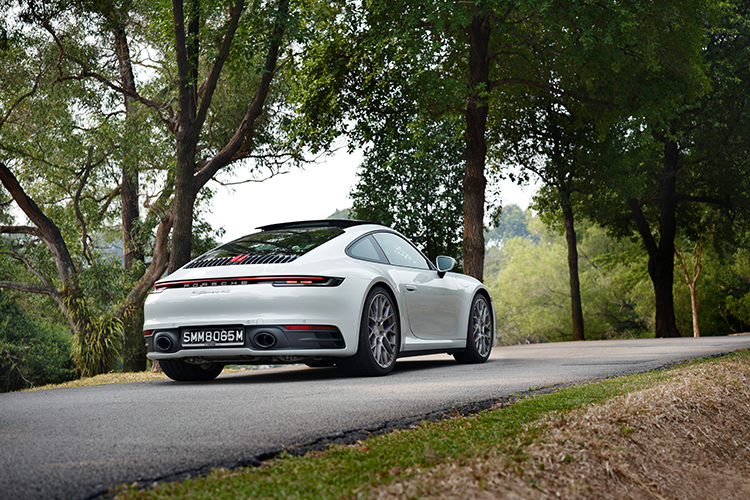