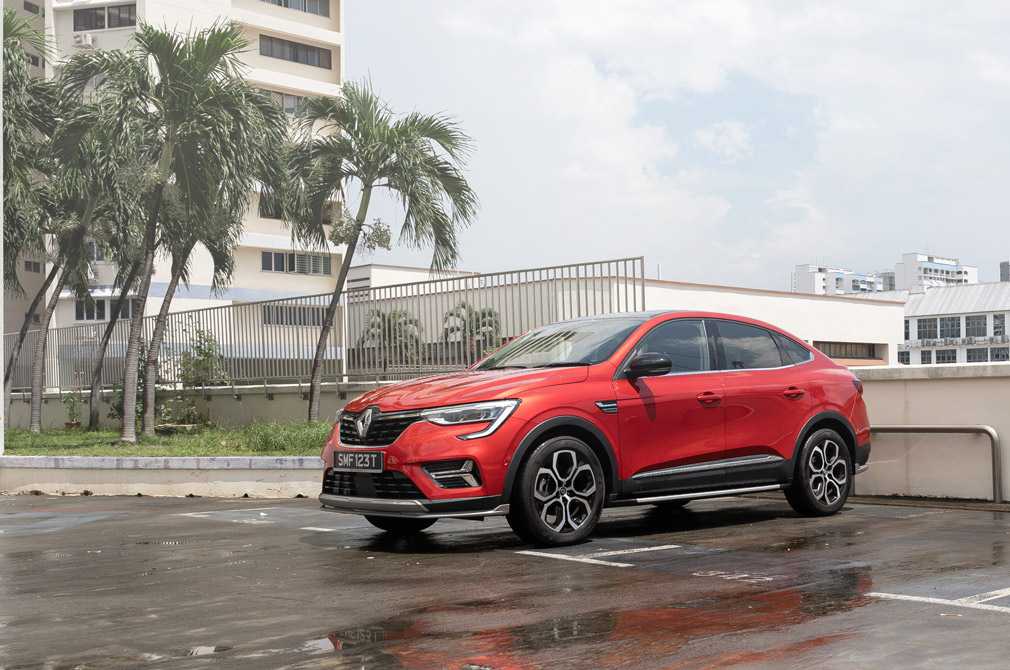 If you look up the word “arkana”, you’ll find references to “arcane”, which means something secret or mysterious. That has foreboding connotations.

However, Arkana also sounds like it has something to do with alchemy. One of alchemy’s definitions is “a process so effective that it seems like magic.”

Indeed, the Arkana might be what Renault’s “magicians” have conjured after being tasked to produce an SUV with coupe-like styling. And they didn’t stop there, for they also gave it a unique hybrid drivetrain and a novel gearbox.

Before diving into the wizardry, let’s get the obvious out of the way first. The Arkana is the largest and most advanced of Renault’s three available SUVs, making it the top model in its lineup.

Renault refers to it as a fastback, though, as it has a sloping windscreen that opens together with the tailgate when the boot is accessed. 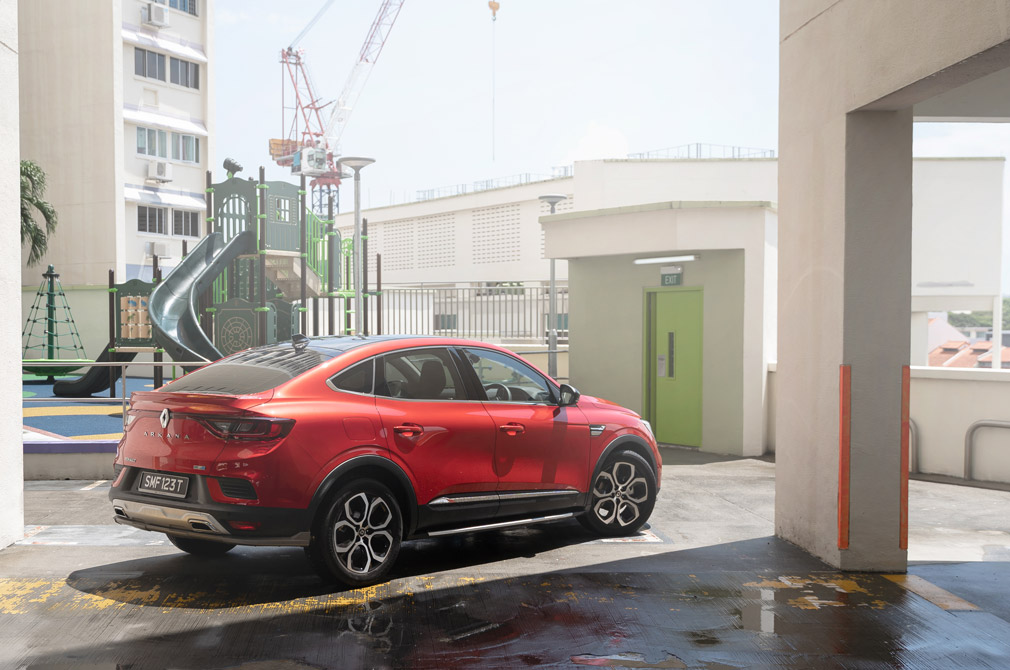 That’s why the Arkana is most attractive when viewed from the side or rear three-quarter angle. It’s when the flowing roofline and coupe-like greenhouse are most obvious. In the dark, its silhouette might have you mistake it for a BMW X4.

Given its styling language, the designers could have certainly done more for the front end. In keeping with the brand’s corporate identity, the Arkana’s face resembles the Megane’s. Ditto for the rear end.

Considering that the smaller Captur and mid-tier Kadjar have unique-looking rears, the designers could (and should) have done something more special for it.

That said, the Arkana’s cockpit does look snazzy. Bose Edition variants like the one here are equipped with a 10.25-inch digital instrument cluster and a 9.3-inch tablet-like infotainment display. Regular variants get a 7-inch display instead.

Though not the most intuitive for first-time users, the menus are easy to get the hang of. There is no danger of getting lost in a deep dive. Setting up Apple CarPlay is also straightforward. 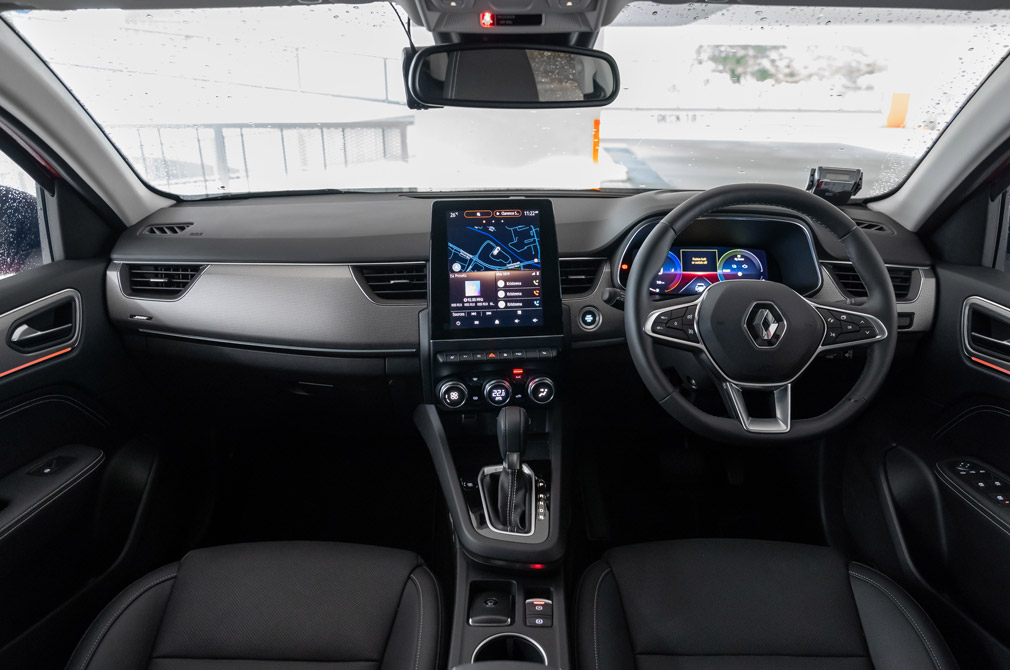 The instrument panel offers several layouts for the driver to choose from and the sharp graphics enable you to read the info at a glance.

Surprisingly, instead of the fancy electronic shifter found in the Captur Privilege, the Arkana has the conventional gearshift lever from the Megane. It also lacks the little metallic trims on the end of the indicator and wiper stalks. Small touches, but they make a huge difference.

With a sloping roofline, you’d expect backseat space to take a beating, but it does not. Passengers up to 1.75m tall won’t have an issue with headroom or legroom, and foot space is decent as well.

Further enhancing comfort are the relatively tall backrests and standard rear air vents. For the latter to be effective, remind the driver to set the climate to 17 degrees C or “Low”.

Even more useful to occupants is the generous boot capacity. There are 480 litres with the rear seats in place and 1263 litres when they are folded. The space itself is flat and rectangular, which adds to its flexibility. 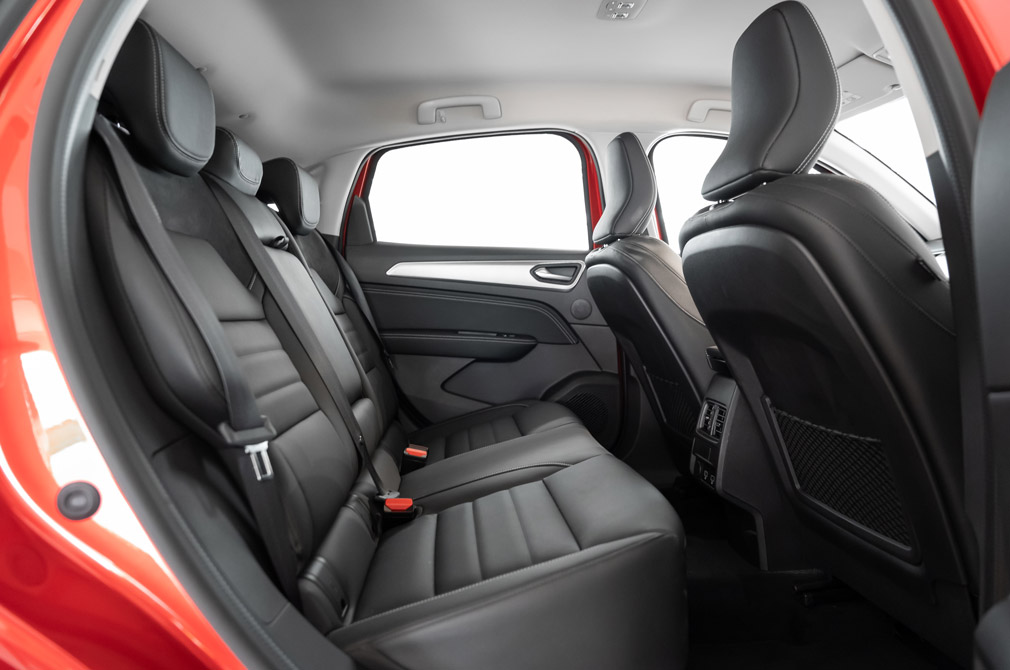 Now, most hybrid drivetrains feature a petrol engine and an electric motor. The Arkana’s E-Tech drivetrain, on the other hand, features two electric motors: In addition to a 36kW unit, there’s also a 15kW High-voltage Starter Generator or HSG.

There’s 141hp on tap, along with 148Nm from the petrol engine. On its own, the electric motor delivers 250Nm, which makes moving off from a standstill effortless.

The power unit/s are easy to grasp, but the dog clutch transmission is tricky to explain. So, I turned to Torque’s resident mechanical engineer, Shreejit Changaroth, to help us figure it out.

Every conventional manual gearbox has a dog clutch. Pegs on the ring that is rotating slip into corresponding slots on the free-wheeling gear train to engage that gear.

The synchromesh rings match or “synchronise” the speeds so that the dog (peg) does not crunch when going into the slots. It’s like slipping the fingers of one hand in between your fingers on the other hand to lock them together. 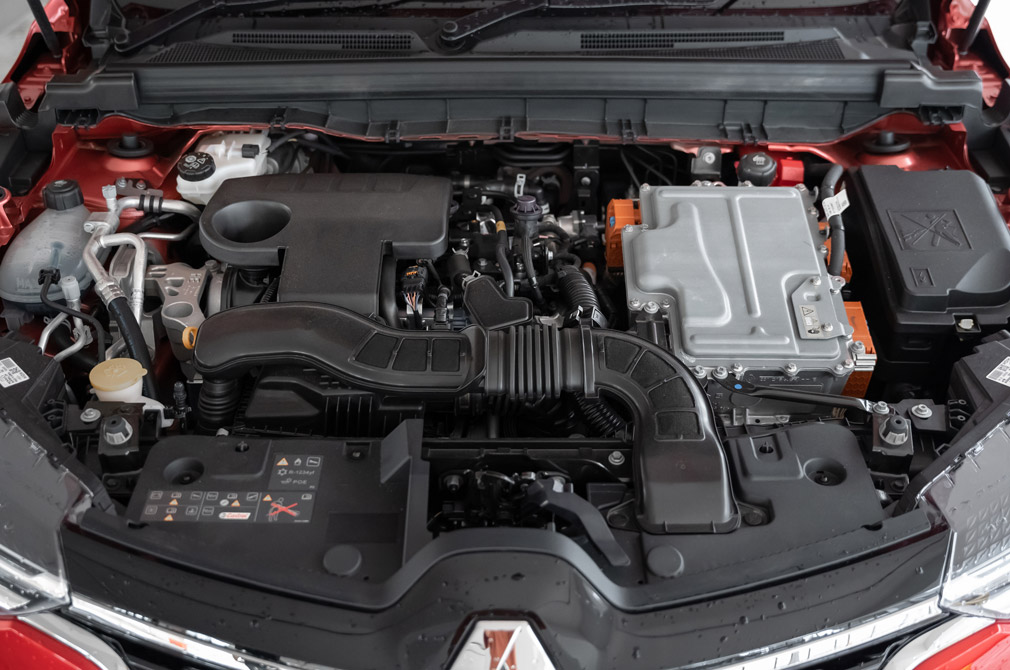 The disengagement of the clutch (not dog clutch but the third pedal-operated friction disc clutch) helps the synchromesh achieve the speed-matching.

It’s these “dogs” that lock the rotating shaft to the gear shaft which until then is just freewheeling.

Now, the Arkana has an interesting take on the mechanism. It has the dog clutches, but no friction disc clutch. Shreejit also thinks there are no friction rings either.

To “speed-match”, the electric motor brings the gear train up to speed and thus synchronises the dogs with the gear. Very precisely.

NO SMOKE AND MIRRORS

From this explanation, I can sort of picture how it all works.

But far more crucial is how it feels to the driver. And in this respect, it is smooth – there is no palpable grinding or audible crunching. No mechanical sorcery here, that’s for sure.

As expected from a hybrid, the Arkana’s performance is relaxed. Zero to 100km/h takes 10.8 seconds, so you will have to plan your overtaking manoeuvres. The engine’s soundtrack is fairly restrained, which helps keep the ride quiet. 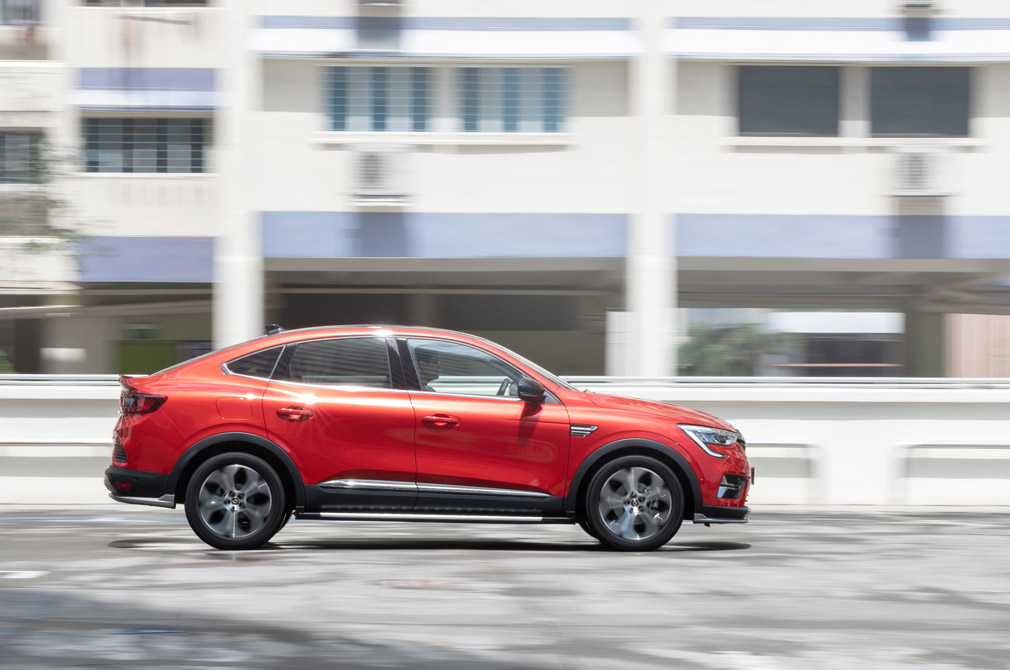 Speaking of which, the Arkana’s suspension – pseudo-MacPherson struts in front and a semi-rigid axle in the rear – is comfort-biased.

It can be pushed just a little bit before it begins leaning and understeer sets in, causing the nose to run wide. Wind on more steering lock and the pliant tyres squeal.

It’s far better to exploit the hybrid drivetrain’s potential. Renault claims the Arkana can average 20km per litre, and I came close. After a weekend of equal parts city and expressway driving, my best and worst figures were 16.1km/L and 17.9km/L.

At lower speeds and provided the 12kWh lithium-ion battery pack has enough charge, you can activate EV mode and drive on electricity alone. Renault says that the Arkana can travel at a maximum of 75km/h in EV mode. 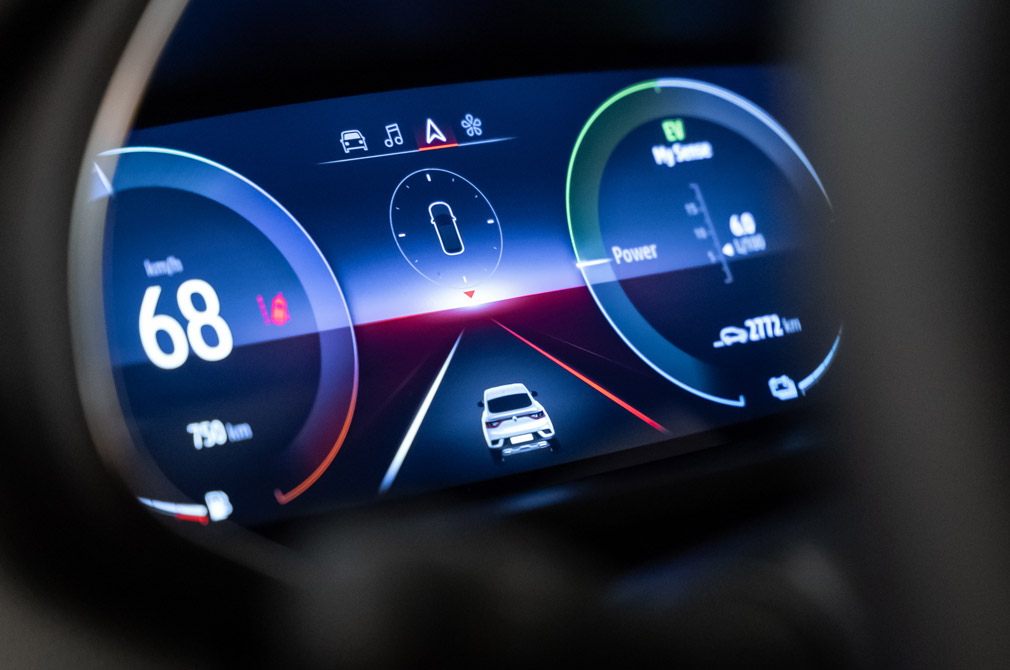 The French have a unique way of doing things, and the Arkana Fastback is certainly an example of this.

Instead of a conventional SUV body, the Arkana has a part-coupe, part-fastback design.

But all told, there no illusions, magic tricks or sorcery at play. The Arkana may be Gallic alchemy, but it holds no secrets. More importantly, it works. 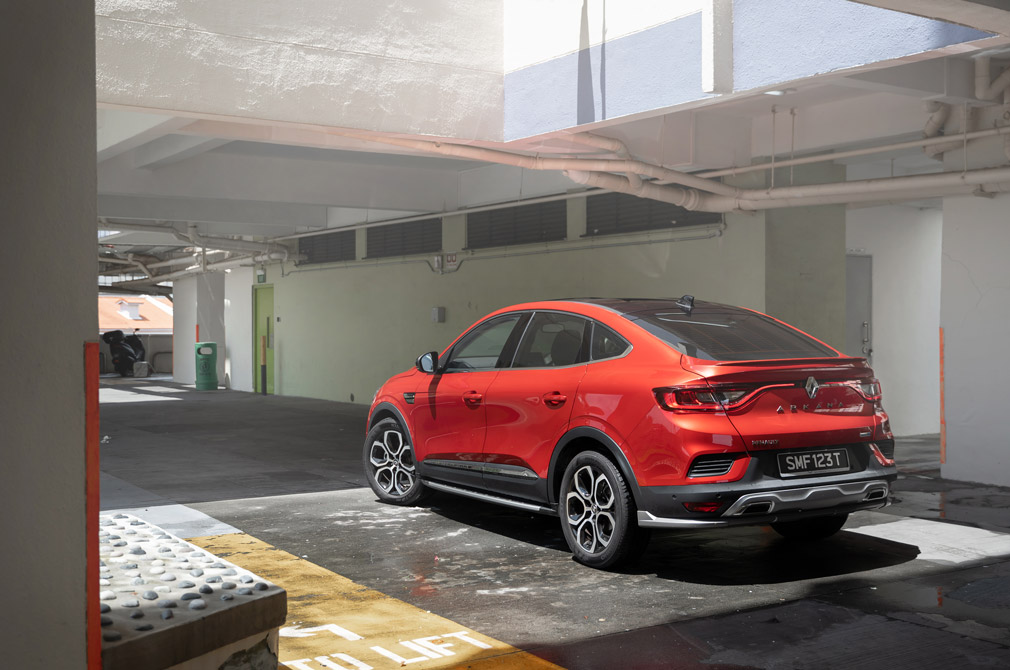