American technology company Eastman Kodak may now be a pale shadow of its heyday, but it famously coined the phrase “Kodak moment”.

The phrase is used to describe a memorable event that is worthy of being captured in a photograph.

In real life, Kodak moments can include milestones like the birth of a child, graduating from university and exchanging wedding vows.

The Kodiaq, a seven-seat sports utility vehicle (SUV), may well be a Kodak moment for Skoda here.

In a way, it marks the rebirth of the Skoda brand in Singapore.

The Czech brand has a chequered past here. It has come and gone numerous times since the 1990s. Its last dealer left the scene in 2013. And even when the brand was present here, its cars did not sell in large numbers.

The brand made a return in April this year by taking a new route. Its owner Volkswagen Group is selling Skoda cars directly, housing its showroom in the same Alexandra Road building occupied by Volkswagen Centre Singapore. 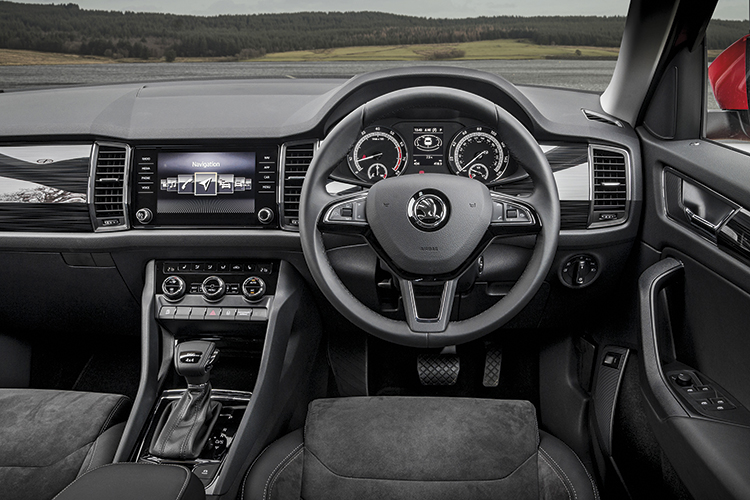 Skoda’s “VW-ness” on the move extends to the dashboard and onboard equipment, but Kodiaq has its own ingenious features such as umbrella storage and automatic door edge protection.

The Kodiaq is named after the Kodiak, a large brown bear found in Alaska. Skoda fondly calls the car “a bear at your command” on its website and brochures.

But size-wise, the Kodiaq does not quite qualify as a large SUV. It is, in fact, slightly smaller than a compact SUV like the popular Toyota Harrier, but has a longer wheelbase.

As part of the comeback plan, Skoda Singapore invited journalists to a one-day familiarisation programme in Mlada Boleslav, Czech Republic. The visit included a tour of the Skoda factory and museum, plus test drives.

The main fare of the test drives was the Kodiaq, the newest model among the four-model comeback.

Skoda Singapore was supposed to have arranged for the seven-seat Kodiaq 2.0 TSI – the only version currently available for sale here – to be tested, but a 1.4 TSI five-seat variant showed up instead. 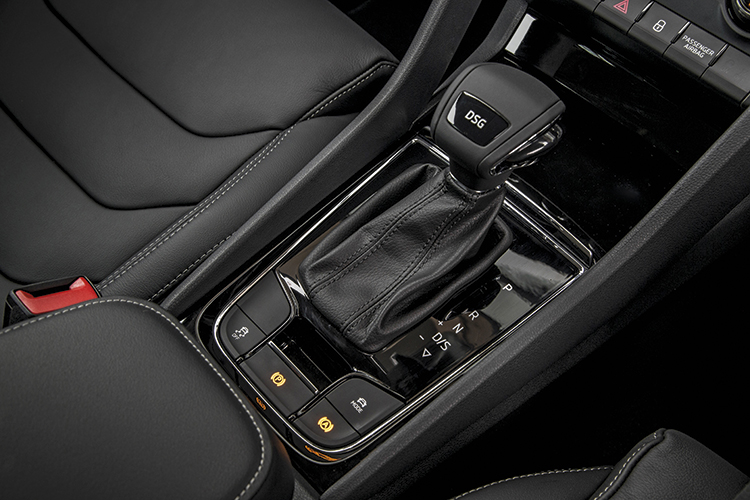 While Skoda says the Kodiaq is a seven-seater, it is actually a 5+2, going by a display car in the Skoda Singapore showroom.

The opening to the third row is small. It takes some dexterity to step inside and tug the head in at the same time. Once seated, knee room is tight for adults and the squabs are too short to provide thigh support.

Getting out is a chore, too. Once you stick out your legs, there is nothing to stand firmly on, so I have to lunge forward from the seating position through the narrow opening.

The third row is best left to smaller children.

And as with cars with three rows of seats, sitting in the third row means sitting almost directly over the rear axle, making them the most uncomfortable, ride-wise.

On the move, the Kodiaq has a high degree of “Volkswagen-ness” – fuss-free and easy to pilot, although a little unexciting.

This is not surprising because it shares the same platform as the Volkswagen Tiguan, as well as engines and gearboxes found in other VW cars. The 1.4-litre engine has to be worked hard to get the five-seater moving. The Kodiaq feels slower than the declared 9.7 seconds for the 0-to-100km/h dash.

But once it is up and running, it has no problem keeping up with the 130km/h traffic on the Czech expressways. At that speed, however, there is pronounced wind noise.

Inside the cabin, the Kodiaq is more functional than plush. The seats are firm and supportive. The steering wheel has the usual controls for speaker volume and paired smartphone.

The centre console has an easy-to-use 8-inch touchscreen that comes with functions like phone pairing and navigation. Smartphones can be charged wirelessly, too.

Outside, it has frills such as LEDs for the headlights, rear lights and cornering lights.

On the safety front, it has seven airbags, blind-spot detection and a proximity warning, which goes off if you get too close to the vehicle in front of you.

Some other small details are impressive. When you open the doors, plastic strips about 20cm long automatically snap out to protect the edges and prevent the doors from denting cars parked next to it. 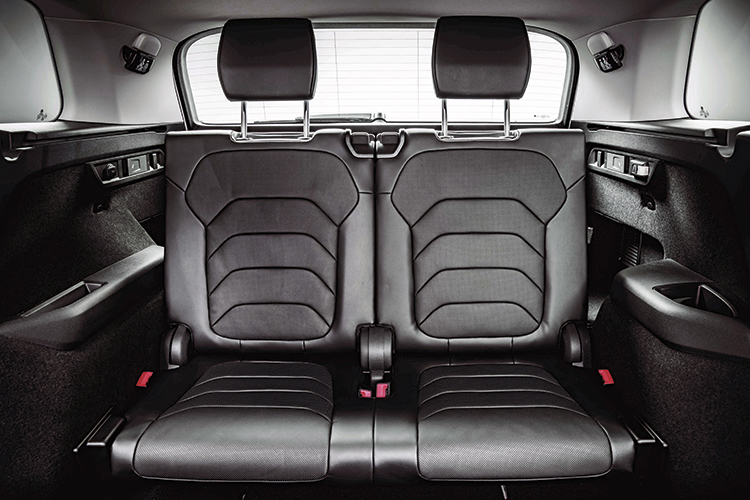 This seven-seater is actually a 5+2 in terms of multi-occupant space, so the clever “bear” works best in five-seater mode with a roomy 630-litre boot.

And the front doors come with built-in umbrella slots – a feature Skoda shares with Rolls-Royce. The slots even come with holes to drain water.

The footwell of the second row of seats is lighted, which makes it easier to look for small items that drop there or vacuum cleaning.

The boot has hooks to hang grocery bags. These hooks are not typically those fixed ones that are flush with the sides of the boot, instead they are adjustable and suspended on a rail. These hooks will be perfect for hanging food “tapao-ed” (bought) from hawker centres, without having to worry whether they will spill.

Less impressive traits on the Kodiaq test-car include a tailgate that does not shut completely unless you give it a big shove.

The Kodiaq 1.4 TSI to be sold in Singapore will have a panoramic sunroof. This ought to make the compact cabin feel more spacious.

Both the 1.4-litre and 2-litre Kodiaqs have their own appeal.

An advantage of the less powerful engine is that it consumes less fuel (6.3 litres per 100km versus 7.4 litres per 100km), although it has a slower century sprint (9.7 seconds versus 8.2 seconds), a lower top speed (197km/h versus 205km/h) and one less gear. These deficits make little difference to daily city driving. 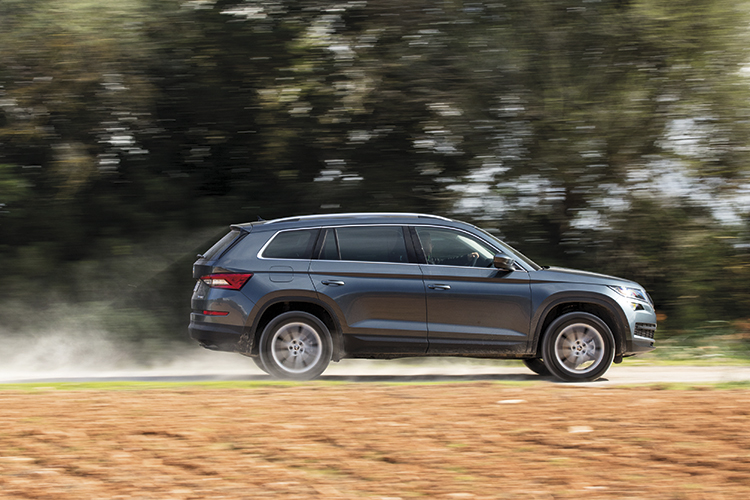 If Singaporeans warm to the Kodiaq, it will be a real Kodak moment for the Skoda brand in Singapore.

The 1.4 TSI Kodiaq drives its front wheels, while the 2-litre variant has all-wheel-drive, something that is good to have but not really necessary in Singapore.

The Kodiaq 2.0 TSI has been delivered to customers here since May, while the Kodiaq 1.4 TSI is expected to arrive later this year. Both versions will have seven seats.

Those who are not in a hurry ought to wait for the 1.4-litre Kodiaq and weigh the pros and cons before deciding which variant best suits them.

The biggest competition that the Kodiaq faces is against non-European rivals.

The Kodiaq 2.0 TSI may the cheapest European seven-seat SUV in the market right now, but it faces competition from Korean SUVs like the Kia Sorento and Hyundai Santa Fe, as well as Japanese rivals like the Mitsubishi Outlander and Honda CR-V seven-seater, all of which are cheaper. 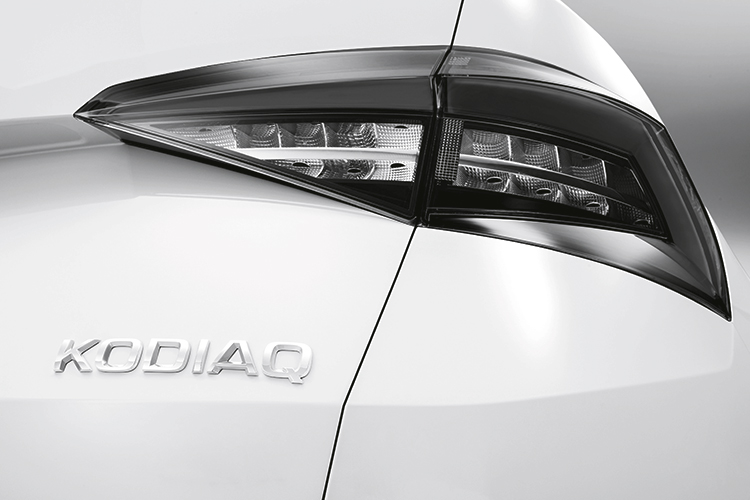 This is where the 1.4 TSI version of the Kodiaq comes in. If it is priced competitively, it can snatch sales away from its cheaper Korean and Japanese rivals.

And if Singaporeans warm to the Kodiaq, it will be a boost not just for the car but also for the brand, making it a real Kodak moment.