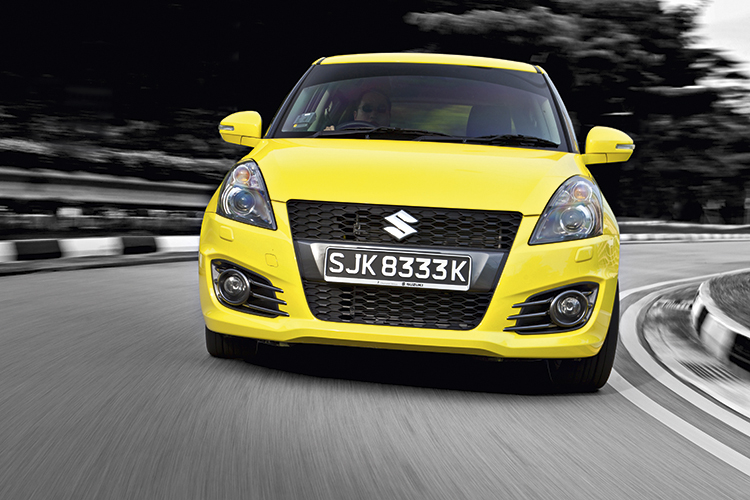 The Suzuki Swift Sport is a 136hp Japanese hot hatch.

We shall start with the good bits. Suzuki has uprated the original Swift Sport’s M16A engine, giving it an extra 11bhp and 12Nm. The rally-bred, high-compression (11:1) 1.6-litre 4-cylinder remains naturally aspirated, but now has a variable-length intake system.

At low speeds, a diverter valve in the intake plenum allows the intake air to ride a shortcut between the throttle body and the inlet ports. This helps with throttle response at low speeds, but efficiency can be optimised if the tract is longer somewhere in the mid-range so that the airflow is smooth and laminar, providing an effect of “pressuring” the inlet ports. 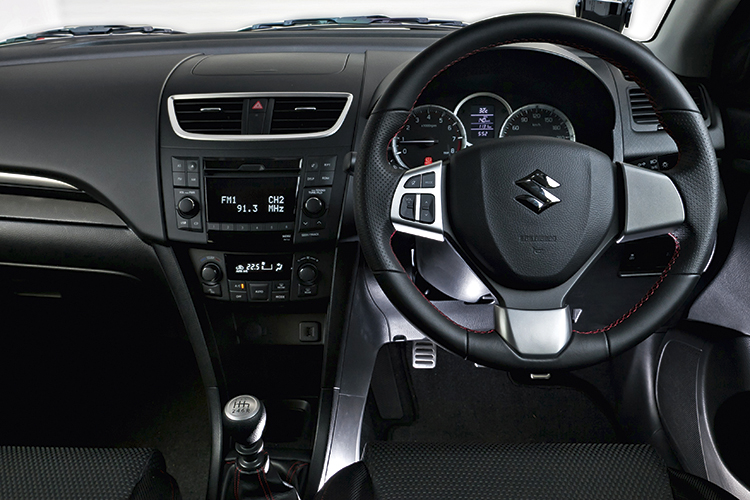 Suzuki Swift Sport cockpit has been made classier and more practical, and has six standard airbags as before.

To achieve this, said diverter valve closes the shortcut and the air therefore takes a longer route when the engine is running at medium revs. At the top end of the tacho range, large volumes of air need to be quickly sent into the cylinder head, so the valve opens the shorter path again.

In all driving conditions, the new Swift Sport engine is noticeably improved. Most of all, acceleration from low speeds is now immediate and devoid of the old motor’s intermittent tendency to be “lazy”, making the throttle feel a little dead. 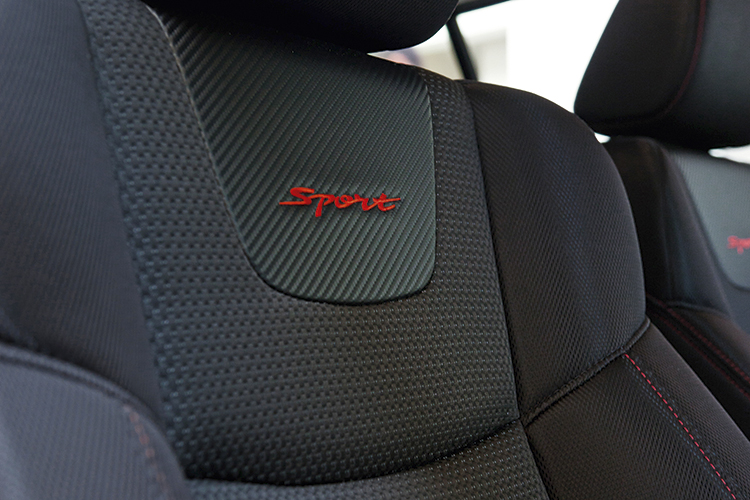 The lustier powerplant revs freely from 1000rpm all the way to its 7200rpm redline. The variable intake system may not be the only reason for this – ECU re-mapping for the electronic throttle, ignition timing and variable cam timing has undoubtedly contributed to the overall effect.

Suzuki’s claim that its latest hot hatch sprints from rest to 100km/h in 8.7 seconds, just a bit quicker than before, is believable given the car’s zesty character. 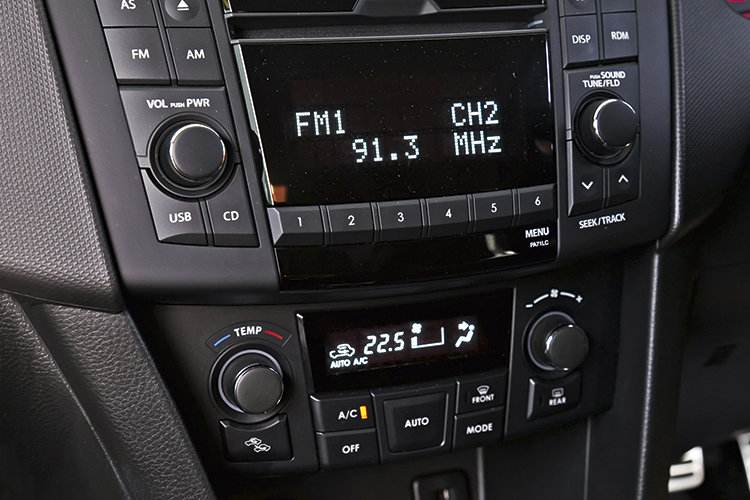 Suzuki Swift Sport doesn’t have a touchscreen-operated infotainment system, but the hi-fi unit is user-friendly.

Zesty is exactly the word to also describe the dynamic behaviour. The old Sport never fails to impress with its steering precision, “Swift” turn-in and agile handling – despite a slightly longer wheelbase, the new Sport is every bit as fun.

While several carmakers still struggle to get electric power steering to possess the feel and accuracy of a good hydraulic system, Suzuki already had it perfected with the 2006 Swift Sport. Six years on, there are not many electric steering systems that can match it. This is a critical ingredient in endowing the small hatch with the finest handling in its class. 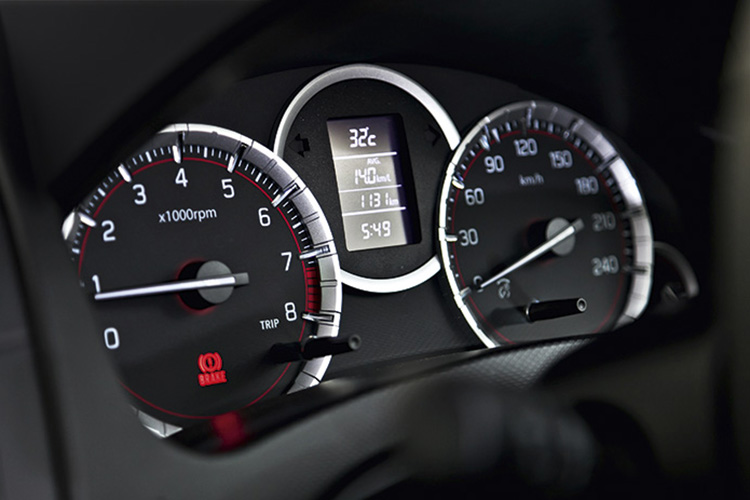 Redline for the Suzuki Swift Sport’s engine is 7200rpm, compared to the old car’s 6800rpm.

You can slow down as you approach a corner (the pedals are perfect for heel-and-toe) or steer into the apex at an alarming speed. Either way, there is barely a hint of understeer, the car simply treading through neatly.

Brake as you enter a corner (using strong four-wheel discs) and the Sport responds with gentle oversteer that can be easily checked with the steering or by releasing the brake pedal. Just how Suzuki engineers have managed to improve the car’s ride comfort at the same time is quite inexplicable. 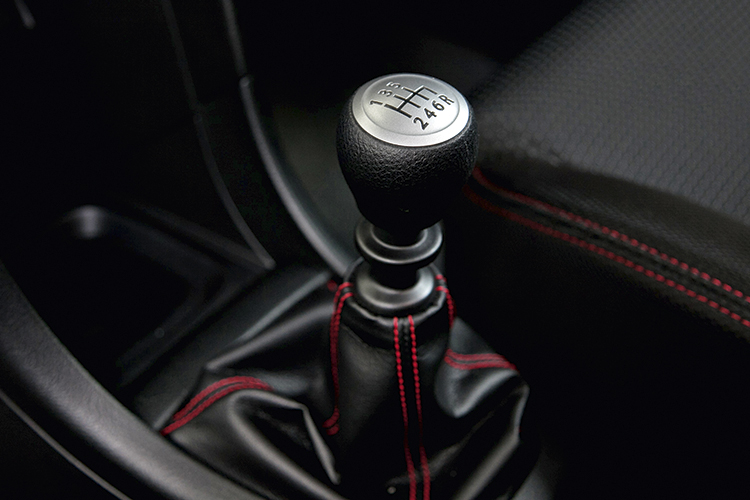 With a new 6-speed manual gearbox in place of the previous 5-speeder, cruising at 150km/h is no longer a ear-splitting experience. In sixth, the Sport is geared for 36.2km per 1000rpm compared to 29.4km per 1000rpm in the predecessor.

What this means is that at 150km/h, the engine is spinning at 4100rpm whereas the previous Sport would be showing more than 5000rpm. Fuel economy is significantly better as a result. During my weekend test drive, despite frequent wide-open-throttle acceleration (incidentally a real joy), the trip computer persistently indicated 13.6 kilometres per litre. 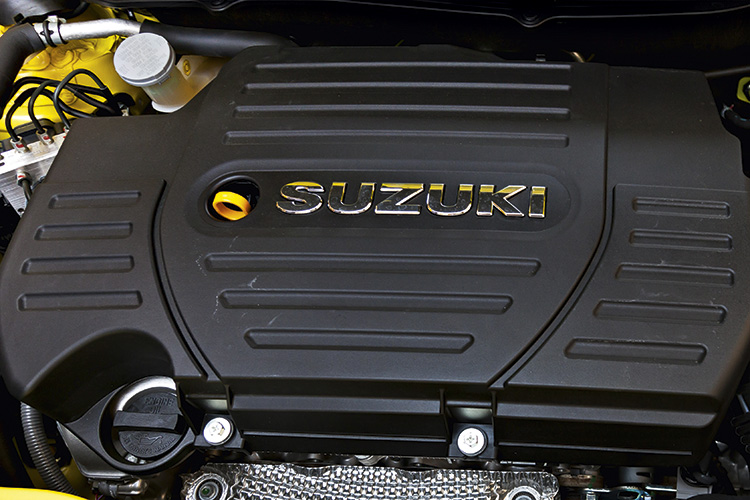 Although largely unchanged in styling, the new Sport shares none of its body panels with the old model. The roof and the waist line, for instance, taper more sharply, resulting in a shorter and shallower rear window. Suzuki got it right the first time, so there are no drastic design changes needed.

The signature curves at the front are still there, as is the full-height grille with black honeycomb insert. It is no doubt one of the snazziest small five-door hatchbacks around. Only the rear number plate inset in the bumper is not so pretty. Otherwise, this pocket rocket looks purposeful, especially when seen in someone’s rear view mirror. 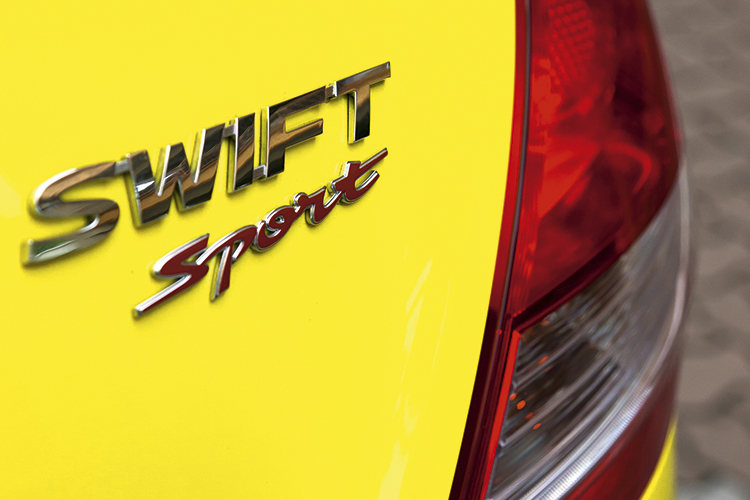 Inside, the car is totally new. Against the measuring tape, the 50mm increase in wheelbase looks like a waste of time, but sit in the back of the Swift and you immediately feel a significant improvement in legroom. Attention to detail is pretty obvious on first acquaintance.

The ergonomics of the dashboard is first class, partly because it contains simple, easy-to-understand controls for the air-conditioning (an automatic system now), hi-fi and driver’s switchgear.

The trip computer used to be located high up on the dash where the toggle button is only accessible to the front passenger, now it is conveniently placed at the centre of the instrument cluster with the mode button alongside. Vastly improved audio quality and the addition of a USB port (to connect a smartphone or iPod) are other major upgrades.

The Swift Sport is not the fastest hatchback you can buy, nor is it the most powerful, even if it does possess the best power-to-weight ratio in its segment. 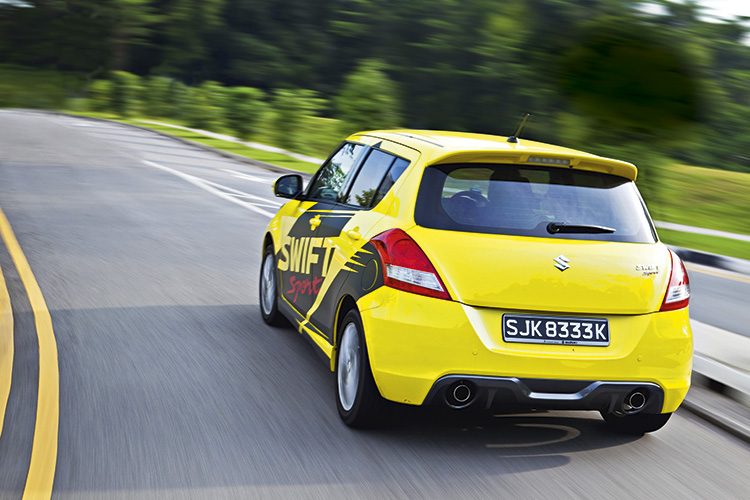 The Suzuki Swift Sport is a Japanese GTI for Singapore’s grassroots.

What’s compelling is the car’s honest-to-goodness combination of performance and handling that can be exploited to its full 100 percent capability without frightening its driver or passengers.

Quick, nippy and eager, plus a decent level of refinement – it’s the kind of stuff that enthusiasts crave in bigger and more spectacular machinery. Simply put, this Suzuki brings a smile to the face of anyone who drives it. Long live the Swift Sport!

Check out the 2018 Suzuki Swift Sport