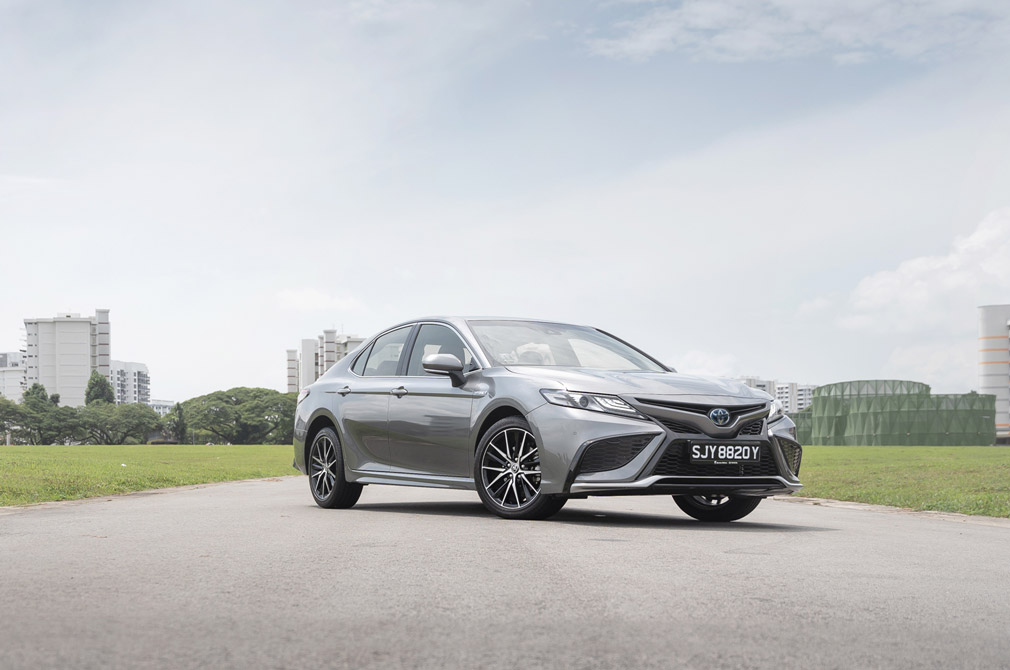 Just when you think you’ve got a carmaker figured out, it’ll throw you a curve ball and leave you thinking, “What just happened?”

This was my first reaction to the latest Toyota Camry Hybrid.

If you’ve driven Camrys in the past, you’ll recall that they are big, soft, cushy, and unexciting. But that last adjective is no slight. Toyota has mastered the art of making bulletproof and frugal cars, which are typically also nondescript and non-offensive.

And the last Camry Hybrid I drove – nine long years ago – was exactly like that. 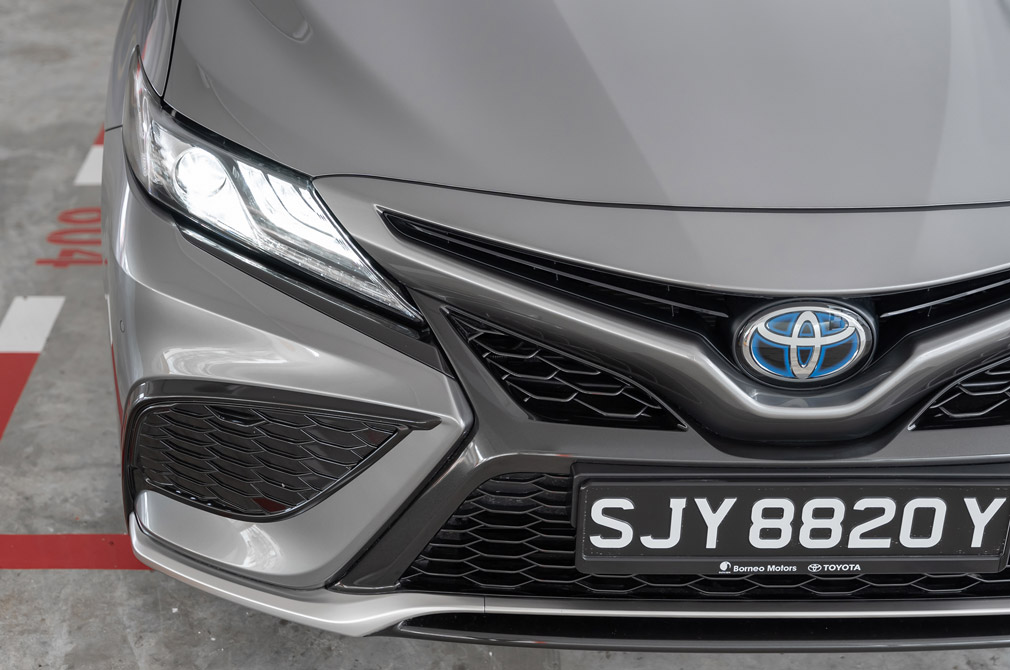 Today’s Camry Hybrid, on the other hand, does not resemble the genteel, eco-friendly mid-size saloon you expect it to be.

In fact, it is more aggressively styled, with a sharper-looking front end, sportier wheels and a boot lid spoiler. And in this hue, one cannot help but imagine it may even have a turbocharged drivetrain.

Nobody is going to say that the Camry Hybrid has boring styling, that’s for sure.

The Camry Hybrid’s cabin delivers another visual shock – it is bathed in bright red upholstery that wouldn’t look out of place in a GR Supra. You get used to it (or not) after a while, though.

After making such a bold statement, Toyota should have followed this up with complementary components, such as alloy pedals and a smaller diameter steering wheel. 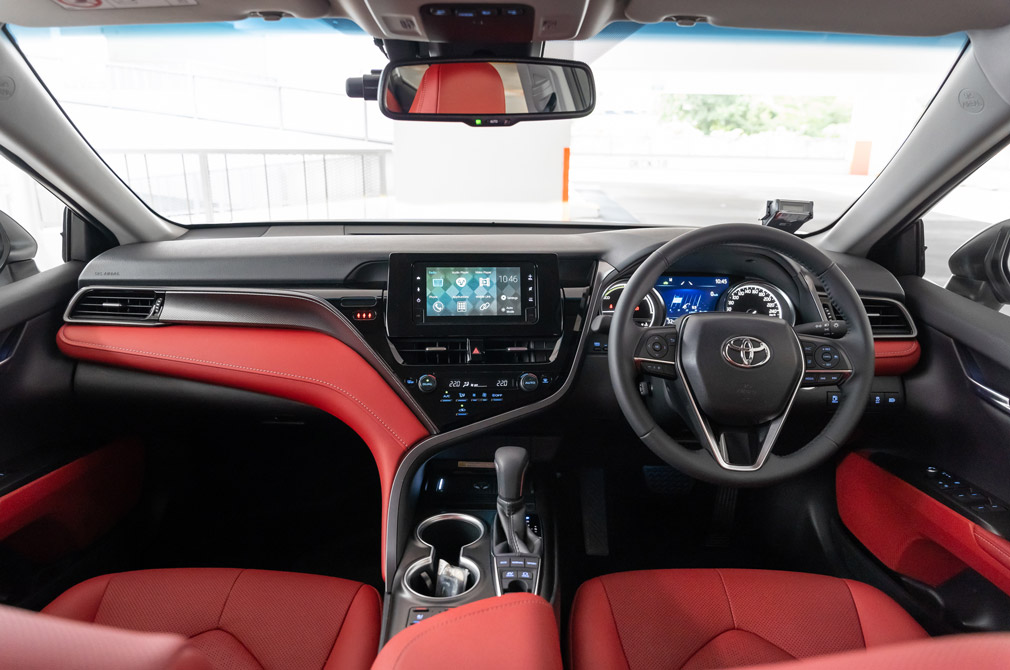 At any rate, there are other things for the driver to focus on. The instrument panel, for instance, has enough menus to keep him or her occupied.

Besides, since these menus are not particularly intuitive, you will need some time familiarising yourself with them and getting used to the button presses required to navigate and change the settings.

I got the hang of the system after three days, but I never got used to it. Toyota should really look into centralising these functions in the infotainment system for convenience.

It would also be better if we had an infotainment system that’s pleasing to look at. 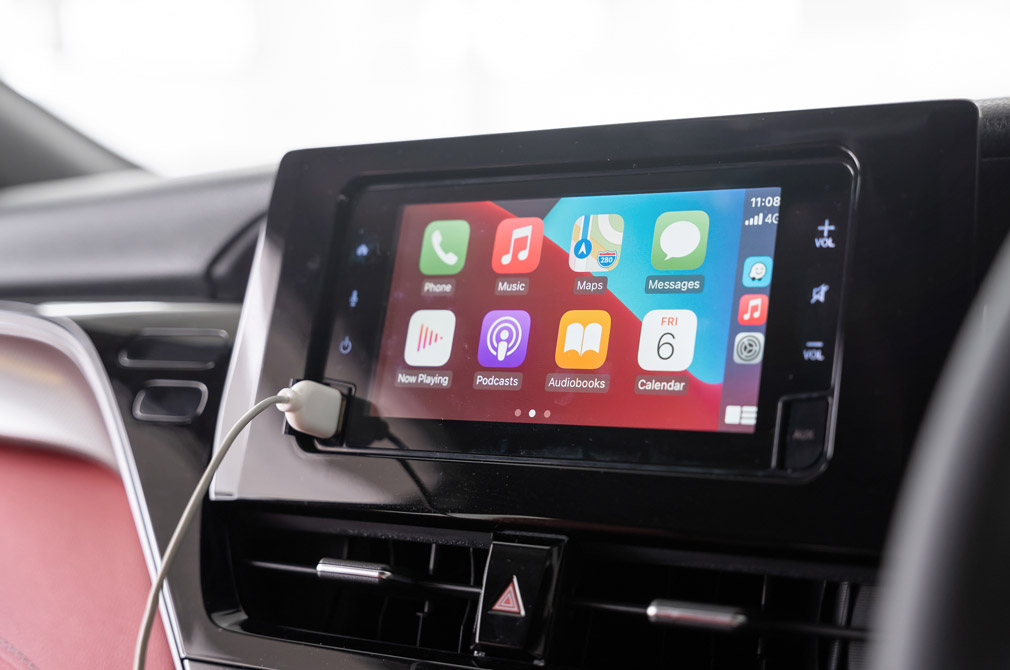 Apple CarPlay loads quickly and the standard menus are easy to navigate.

This particular unit is user-friendly and easy to get used to. But its aesthetic – or lack of it – makes it stick out in an otherwise nice cabin. A smaller touchscreen is okay, but do the bezels really have to be so thick/wide?

But apart from those bugbears, the Camry Hybrid’s interior is a comfortable place to be in. The driving position is better than before, the seats are plush and the air-conditioning is brutally effective.

So frigid is the throughput that even on a hot day, the temperature has to be set to 25 degrees – any lower and everyone will be shivering. You wonder why there is even a need for ventilated seats. Perhaps it’s because they have a heater function.

Refrigerating passengers isn’t what the Camry Hybrid does best, although that is arguably a close second. 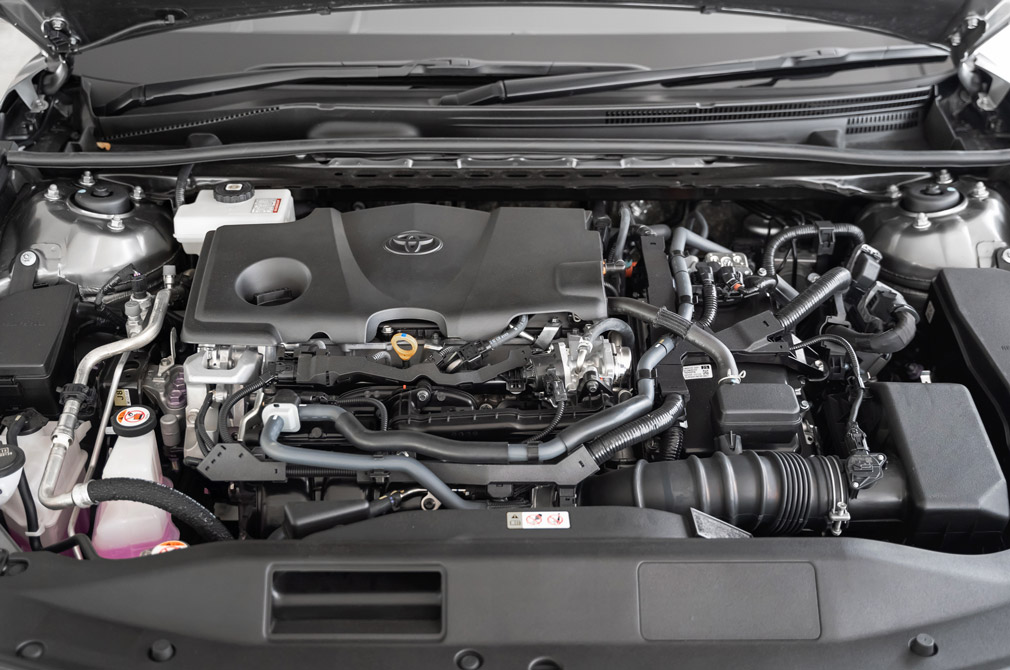 The Camry Hybrid excels at fuel-sipping, thanks to its petrol-electric drivetrain.

This consists of a naturally aspirated 2.5-litre inline-4 paired to an electric motor, which in turn is powered by a nickel metal-hydride battery.

We won’t get into individual outputs (that’s what the specs at the bottom is for). All you need to know is that both systems produce 208hp and can average 22.7km per litre of unleaded.

Power is sent to the front axle via a CVT with six override points for you to play with. But it’s really best to leave it in D and let the transmission do the work – CVTs are unsatisfying to use in this manner.

Pin the accelerator pedal to the floor and the Camry Hybrid takes 8.5 seconds to go from a standstill to 100km/h. That’s 0.7 of a second quicker than the regular Camry 2.5.

The extra performance from the electric motor gives the car some added pep, and more importantly, helps eliminate the “rubber band” sensation that would otherwise been present. 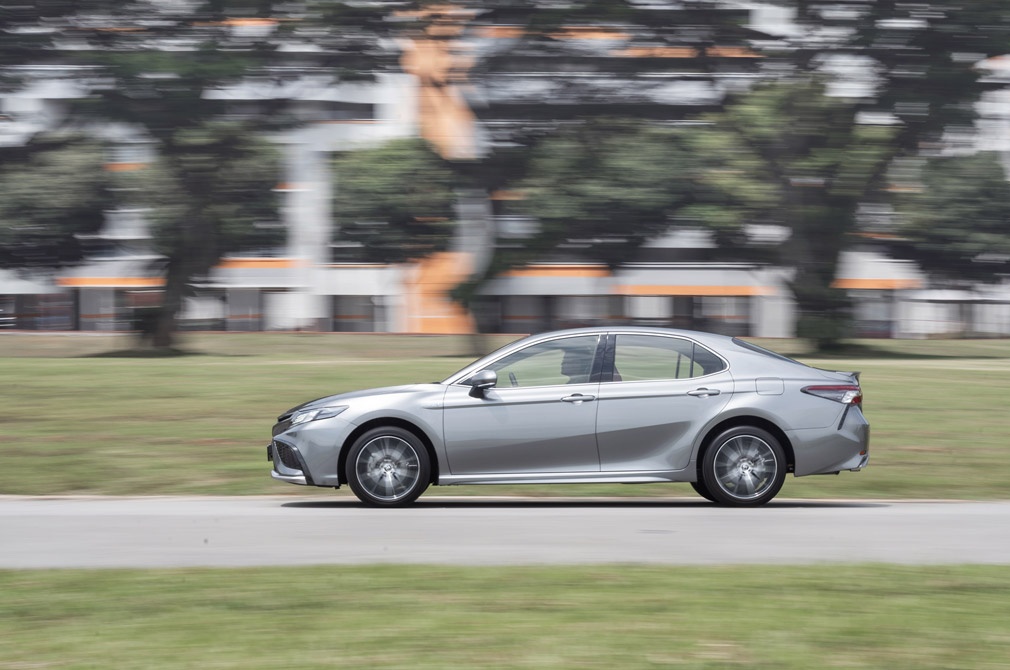 On the go, the Camry Hybrid is relatively quiet and has a much better ride-handling balance compared to its predecessor. It is well-damped, but does not wallow or roll as much as before.

The helm is another improvement. Instead of just being over-assisted and devoid of feel, the steering is now weightier and (surprise) more accurate than before. In addition, the brakes are now more responsive and less spongy.

These improvements all come together when it’s time to go round corners. The nose tries to tuck itself in, instead of feeling like it’s being coerced into the turn.

But at the end of the day, this is no Mazda 6, even if the aggressive looks make you expect more from it. This is after all, a mid-size saloon whose purpose is to be efficient while pampering occupants.

Speaking of which, Toyota claims 22.7km/L, but I averaged about 17.5km/L. It took some effort to get the figure over 18km/L. 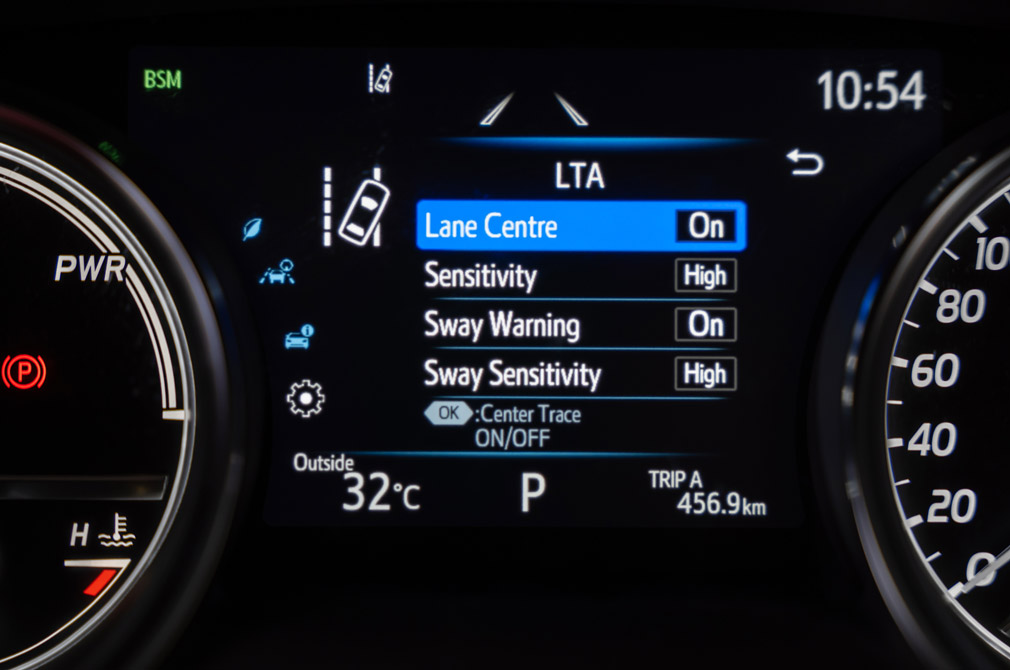 I suppose that’s not bad, considering the 2.5-litre engine.

Just as good are the driver assistance and safety features, which include Dynamic Radar Cruise Control, Intersection Turn Assistance and Pre-Collision System. I also like the head-up display, which helps you stay focussed on the road.

All told, the Camry Hybrid is a compelling proposition for drivers who want an efficient, well-equipped and comfortable mid-size sedan that has just enough sportiness to keep the drive interesting.

Of course, it would be even more interesting if Toyota further upped the handling and drivability of the next Camry Hybrid without telling us. I certainly wouldn’t mind that curve ball leaving me thinking, “What just happened?” 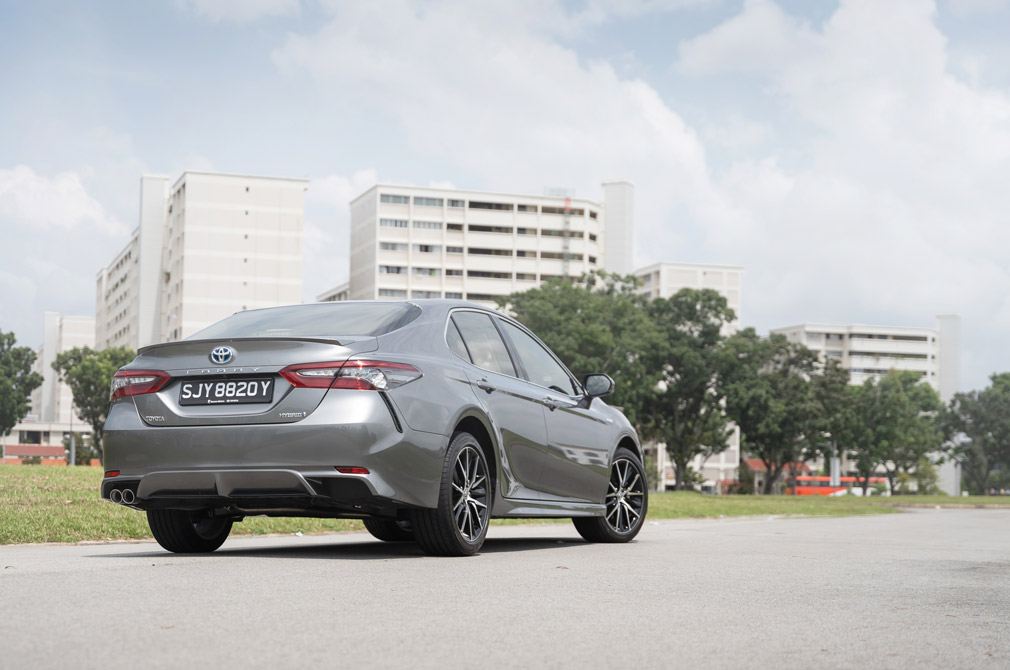 Click here for our Toyota Harrier Hybrid review
Head here for our unique, three-writer review of the Toyota Camry