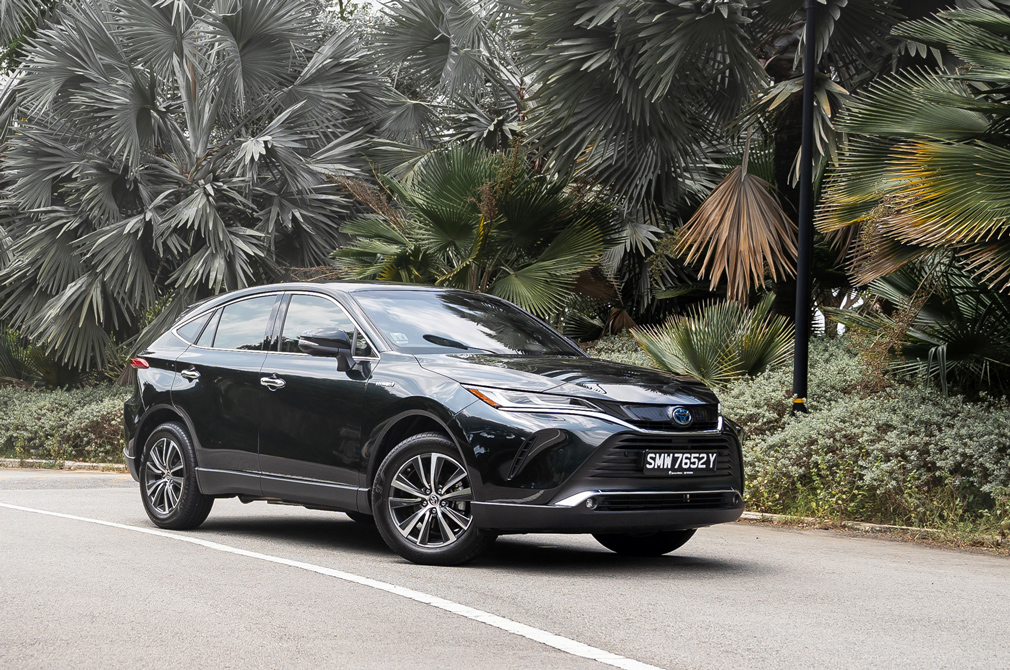 It has a turbocharged 2-litre delivering 227hp and 350Nm, the latter from just 1650rpm. Paired to a creamy 6-speed automatic, the Harrier Turbo clocked a very respectable century sprint time of 7.3 seconds.

One might even say that it deserves its hawk emblem.

Indeed, when we lined up the Harrier Turbo against the Mazda CX-5 2.5 in a previous Group Test, the Harrier’s cushier and roomier cabin, along with its more powerful drivetrain, gave it the edge over its rival.

Mind you, the CX-5 is no pushover. It is punchy, responsive and handles better than the Harrier Turbo.

So, there are high hopes for this all-new and range-topping Toyota Harrier Hybrid. 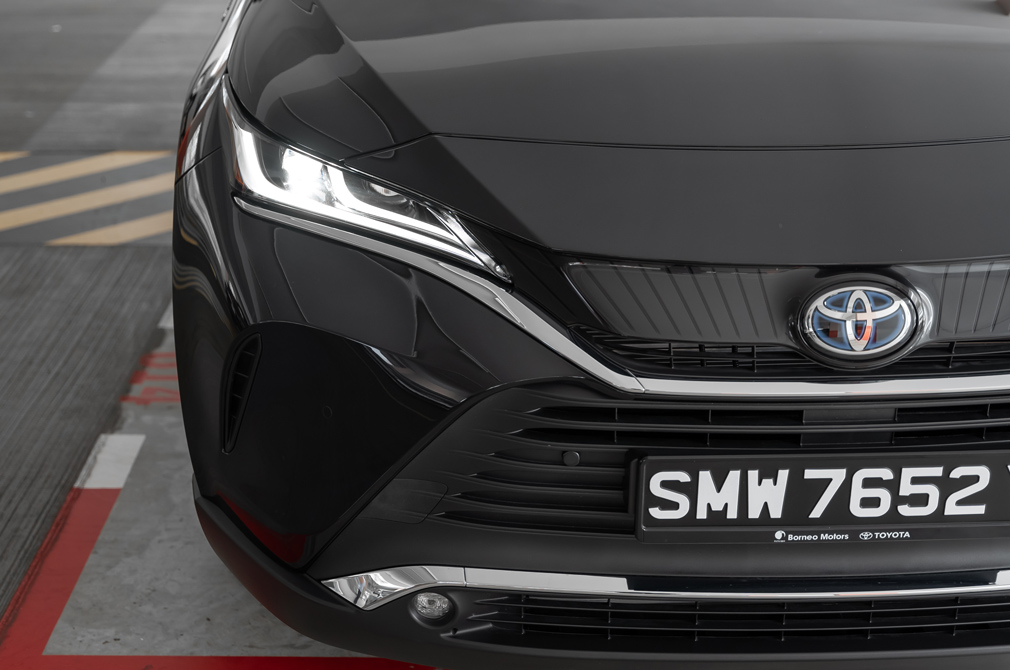 The latest Toyota Harrier looks more chiselled than its predecessor. Though both models have swept-back headlights, the new model now has a more angular front bumper.

Interestingly, the previous hawk emblem that used to adorn the Harrier has been replaced by the ubiquitous Toyota badge. As we shall soon see, that move symbolises the Harrier’s new character.

Designers kept the profile clean, which I think was a good move. Another good move was the treatment given to the rear end. The slimmer tail-lights, sharper tailgate edge and chunky bumper help give this SUV a distinctive look.

With its dual exhausts, the Toyota Harrier Hybrid looks sportier than the Harrier Turbo, which makes do with a single tailpipe. 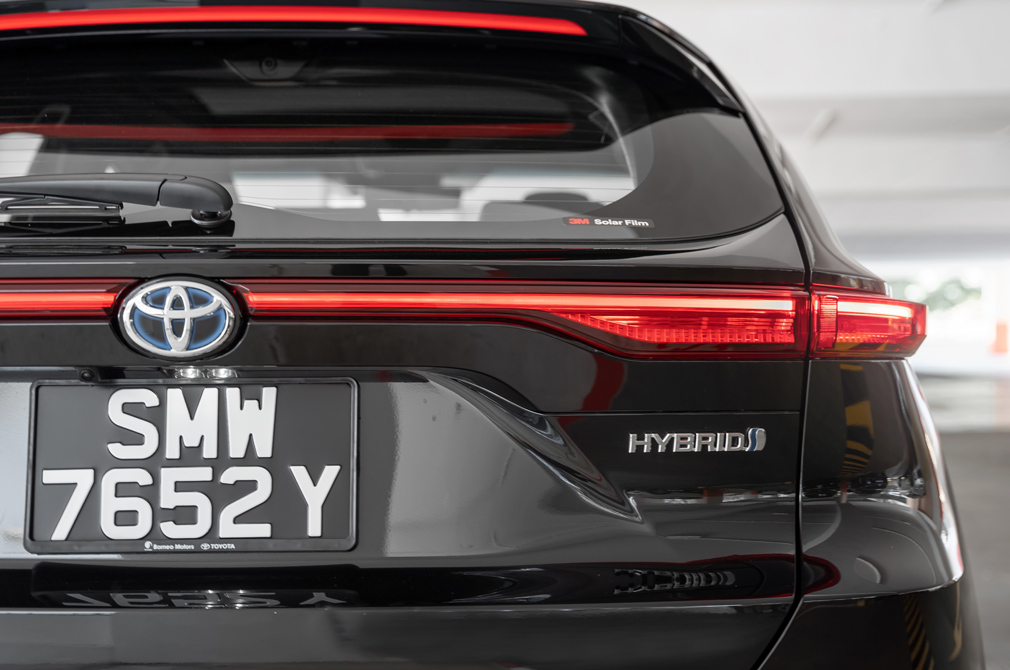 The Toyota Harrier’s cabin feels more upmarket than the previous model, thanks to the neater design and better materials used here.

I especially like the treatment and the layout of the centre console, as the air-con controls are no longer blocked by the gearshift lever. However, access to the wireless charger and USB ports could be better – their deep placement is inconvenient.

Fortunately, the controls for the ventilated seats are right beside the driver. I appreciate how the system remembers the previous setting and automatically switches itself on when you return to the vehicle.

Most surfaces are now softer, and the cockpit’s layout is more user-friendly. The instrument panel has a larger and sharper central display, which makes reading pertinent information easier than ever.

That said, Toyota still does not have a seamless infotainment system. While the one here is usable, it is not as intuitive (or as aesthetically pleasing) as say, the latest system that Mazda uses. 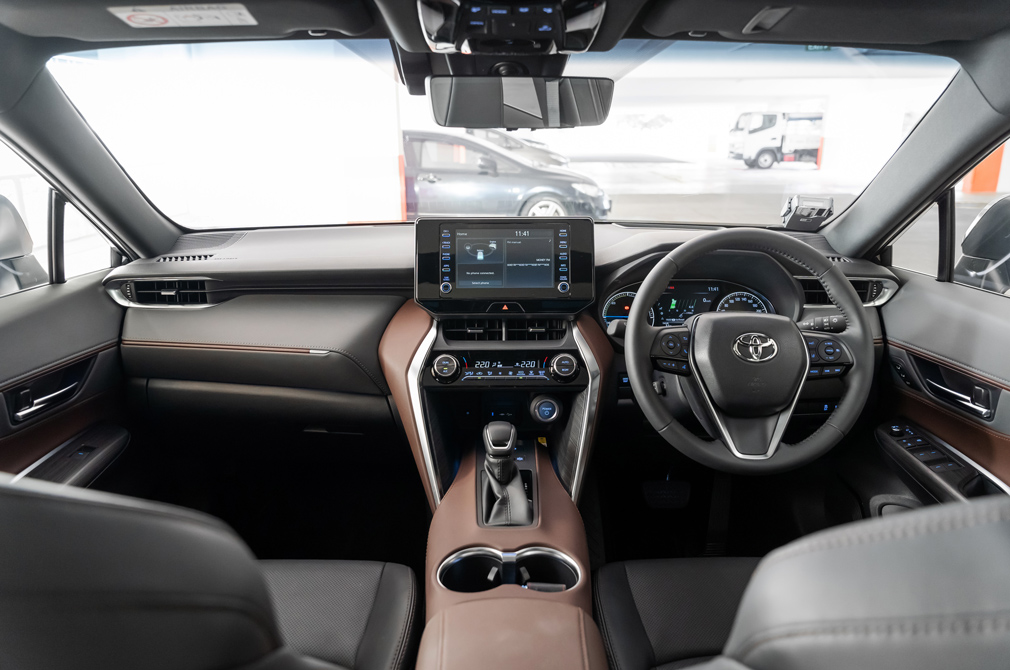 Also, the bezel is too wide, which makes the screen seem small. And the physical buttons surrounding the screen add clutter to an otherwise neat dashboard.

Missteps aside, the Toyota Harrier cockpit is a very cushy place. Sitting behind the wheel feels like you’re in your favourite armchair.

Adding to the classy ambience is the fancy panoramic roof, which utilises electrochromic glass. When dimmed, Toyota says this makes the light entering the cabin seem as if it came through paper windows.

Another highlight is the Digital Inner Mirror, which uses a high-definition camera to stream footage from the car’s rear. If you choose to, the live feed can the conventional rear view mirror. 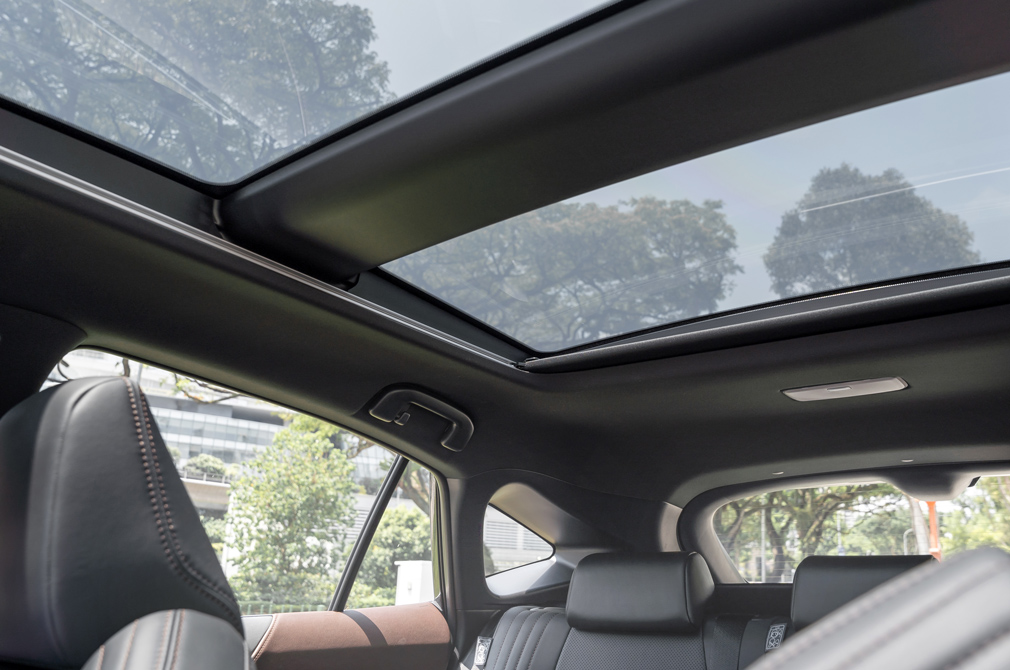 When dimmed, the electrochromic glass makes the light seem as if it came through paper windows.

Toyota engineers hybrids to be as eco-friendly as possible. The carmaker is not known for producing high-performance vehicles that happen to also be “green”.

Beneath the Toyota Harrier Hybrid’s bonnet is a naturally aspirated 2.5-litre inline-4 paired to an electric motor.

The internal combustion engine delivers 176hp and 221Nm, while the electric motor provides another 118hp and 202Nm. However, since both units produce their peak outputs at different speeds, you cannot simply sum up the figures.

Anyway, the total system output is 215hp, which is not far from the Harrier Turbo’s 227hp. The SUV’s century sprint time of 8.1 seconds, though 0.8 of a second slower, also remains relatively respectable. 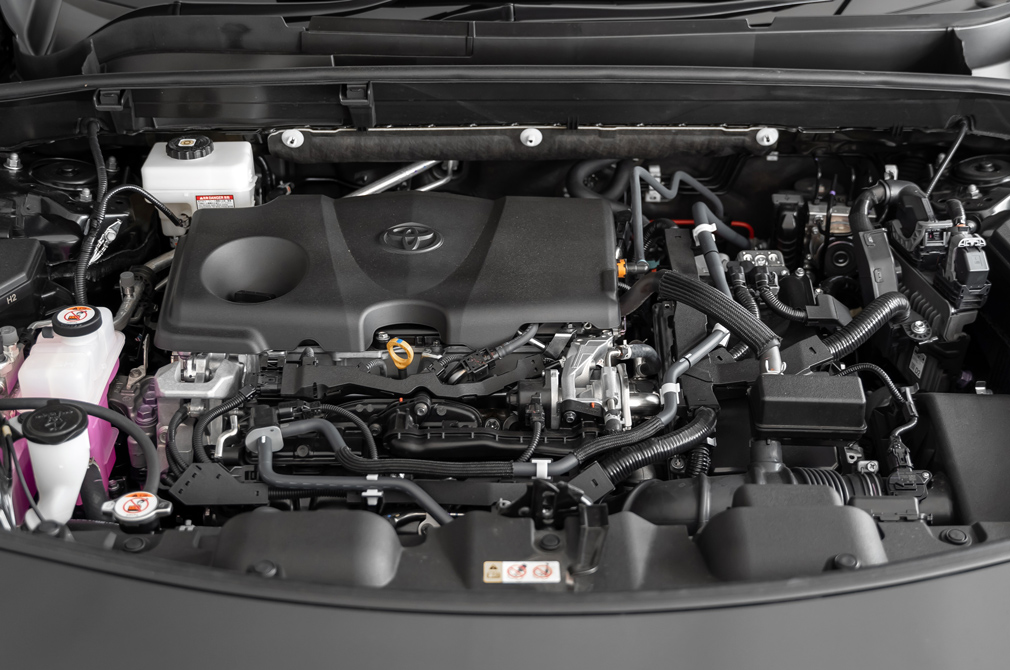 Power delivery is smooth and quiet, and the continuously variable transmission (CVT) is seamless, too. It does feel slightly “stretchy” when you’re chasing revs, though.

Toyota claims a combined consumption figure of 21.2km per litre. Over three days with this SUV, I managed between 18-19km/L. Impressive.

All I had to do, really, was soften my pedal inputs. The hybrid system did the rest. This might be why the fuel tank was only half-full when I collected the car. Borneo Motors must have assumed that was plenty. 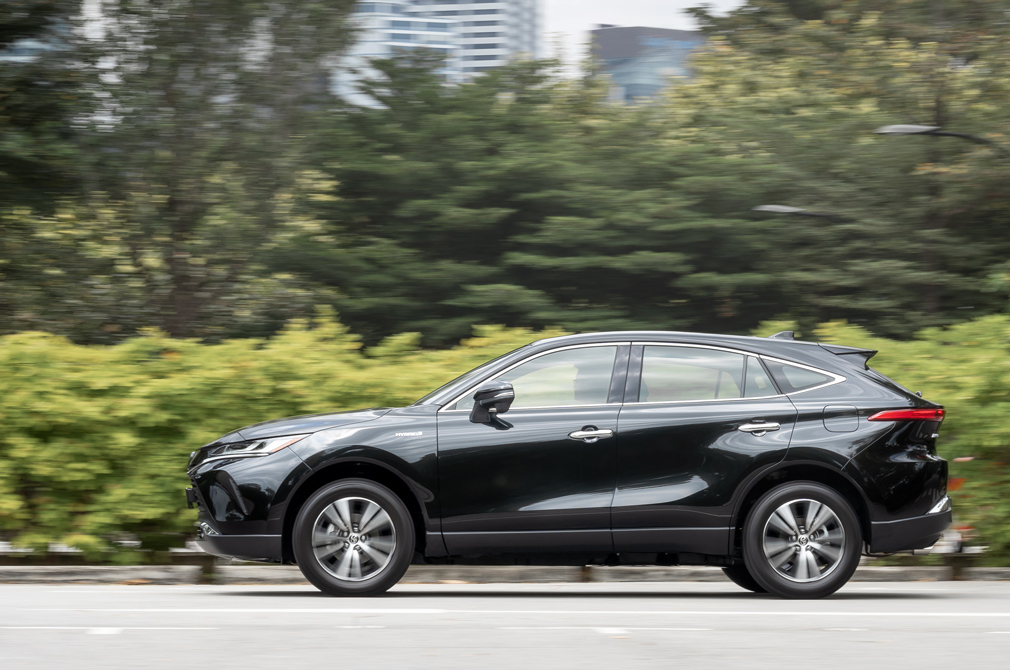 Harrier Hybrid has a pliant and quiet ride quality.

Obviously, the Toyota Harrier Hybrid is not designed with enthusiasts in mind. But I wish it had been imbued with even the tiniest bit of driver involvement.

Behind the wheel, you feel like you’re piloting the Harrier Hybrid from a couch. That comfort also means the Harrier will lean around corners, sending your bum sliding from one side to the other.

The CVT has been given six forward ratios for the driver to play with. But manual override is only via the gearshift lever, as there are no paddle shifters.

After a while, I gave up trying to find “driver engagement” and started enjoying the cushiness and unhurried character instead.

Consider a Harrier if you are always feeling harried, for it really is a relaxing drive. And it can give you the spaciousness of a large SUV without the equally large petrol bills.

This hawk has indeed become a dove. 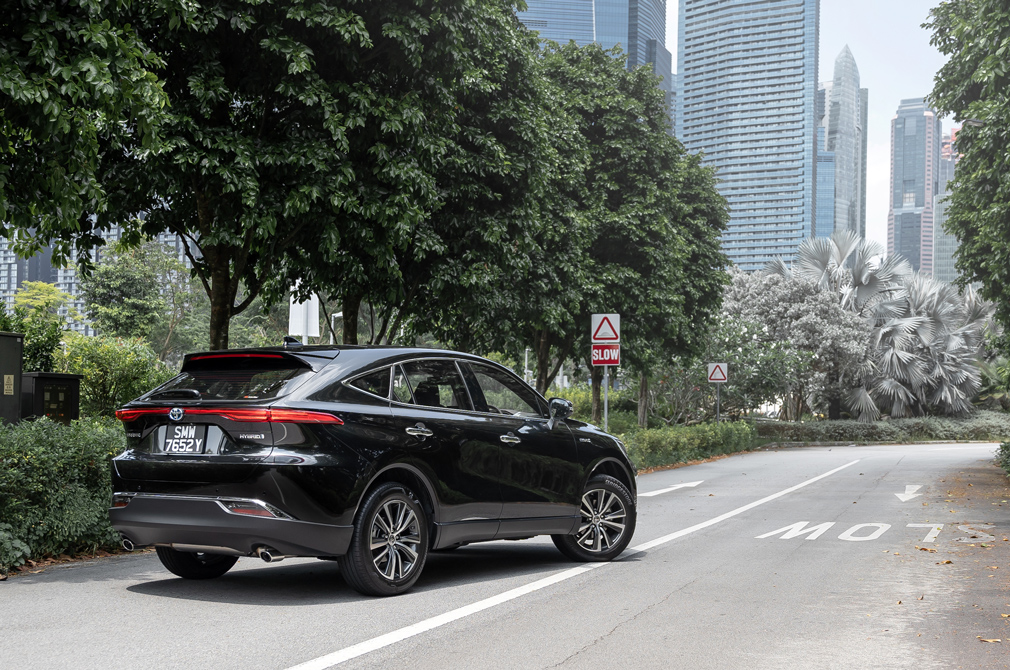