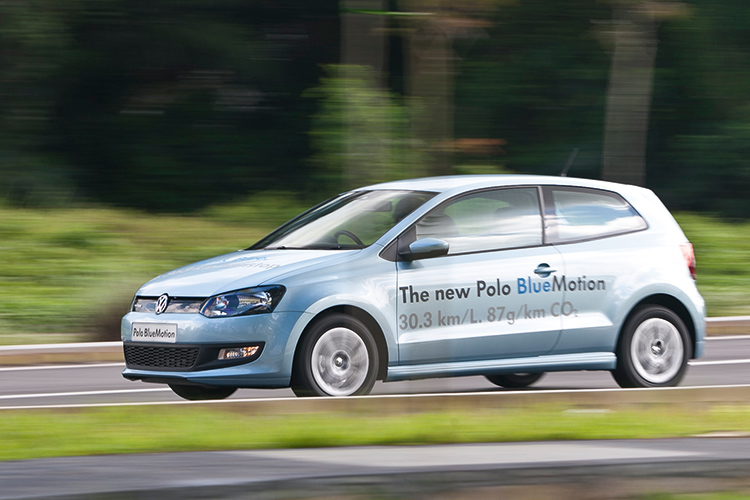 Back in 2007, the Volkswagen Polo was the very first car to wear Volkswagen’s BlueMotion badge.

It’s therefore no surprise that the German marque has again launched a BlueMotion variant of the current Polo.

Its predecessor uses a reworked version of the 1.4-litre TDI engine found in the regular diesel-powered Volkswagen Polo.

The new Volkswagen Polo BlueMotion, however, gets a bespoke 3-cylinder 1.2-litre TDI engine that is claimed to achieve an incredible mileage of 30.3 kilometres per litre! 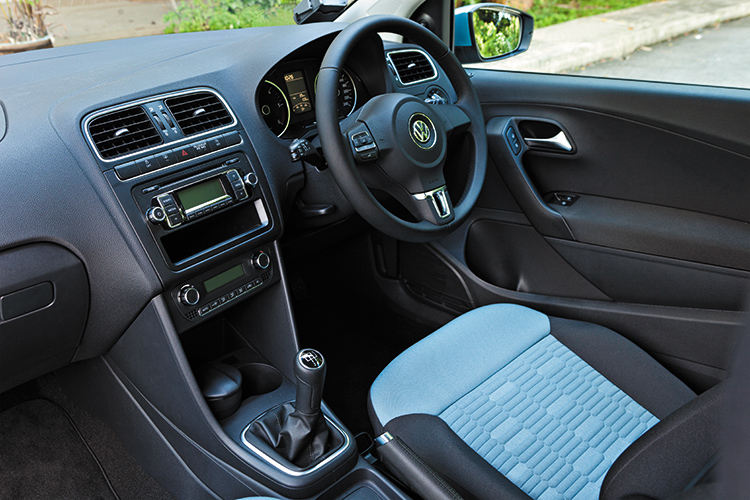 With only 75bhp, and a more substantial 180Nm, the new Volkswagen Polo BlueMotion is definitely not some hot hatch, although in three-door guise it does look kind of sporty.

Externally, subtle changes mark out this cleanest of all modern Volkswagens – a different front grille, reshaped side skirts, rear bumper and spoiler; together with lightweight alloy wheels wrapped in low-rolling-resistance tyres.

All in the name of improved aerodynamics. Oh, and the blue hue on our test car is a unique colour exclusive to BlueMotion models.

All the little tricks seem to work, as the Volkswagen Polo BlueMotion glides along effortlessly long after you back off the throttle. Perhaps it is the frame of mind that the driver adopts when driving a car that, supposedly, can get to Ipoh and back on one tank of diesel. 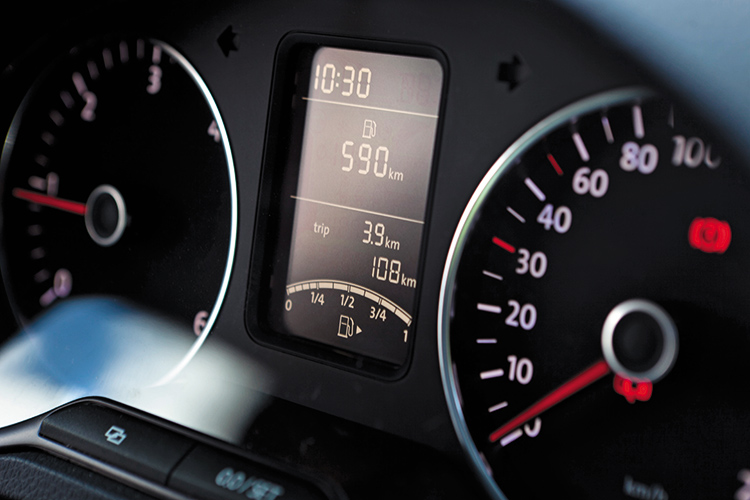 Shift up at 2000rpm (where peak torque occurs, with a gearshift indicator to guide you) and coast towards red traffic lights.

Driven this way, I manage about 23 kilometres per litre, but it feels rather unnatural on the go as the tacho revs hover slightly above idling speed and the engine sounds like it’s being bogged down.

Driven much more aggressively, the Volkswagen Polo BlueMotion will still do some 17 kilometres per litre. This is with the auto start-stop function disabled and the shifting at around 3000rpm “activated”. 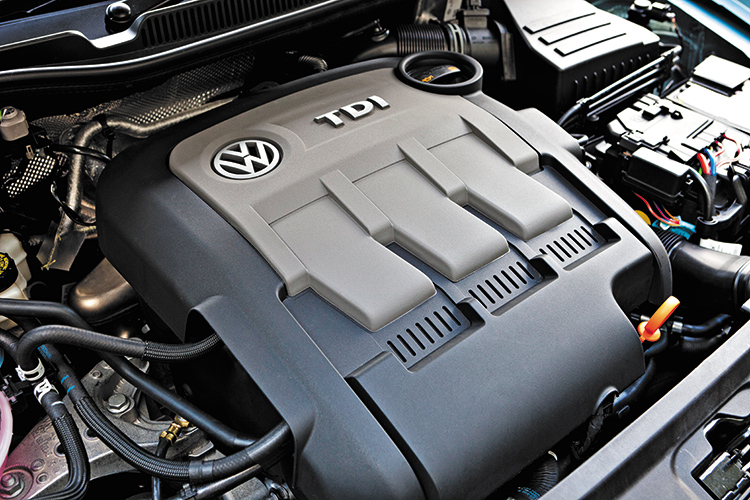 Above 2000rpm, the Volkswagen Polo BlueMotion really starts to feel peppier and sound less like a diesel.

In other words, if you are in a hurry to get to a Greenpeace meet-up, you won’t find the Volkswagen Polo BlueMotion frustratingly slow.

A 6-speed transmission would have helped both performance and fuel economy by allowing even taller gearing, but it is strangely not offered in this car.

Neither is DSG, which is a real pity as it would have allowed the tiny turbo-diesel to be kept in its sweet spot more often for power and “shifted” more rapidly for optimal fuel efficiency. 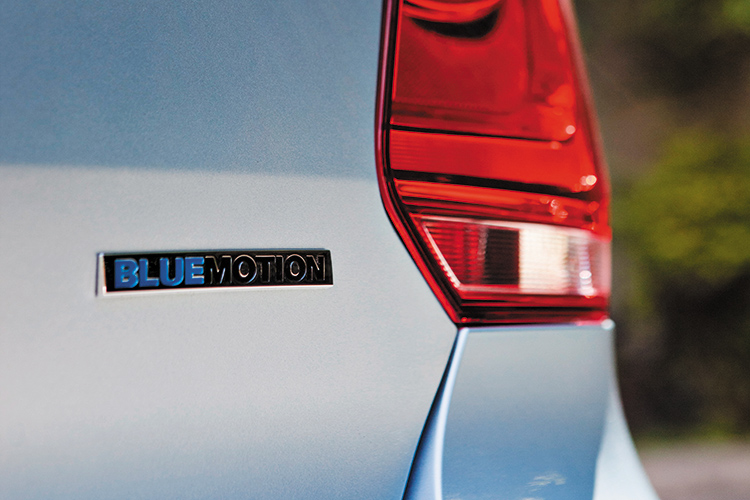 So in my experience, the Volkswagen Polo BlueMotion’s real-world economy is probably about 20km/L, which is a lot better than what your average 1.5-litre economy hatch can do.

Don’t forget that diesel costs less than petrol, and you can be a certified tree-hugger too as this parsimonious Polo is kinder on the environment than anything else of similar size and practicality.

Performance penalty aside, the rest of the Volkswagen Polo BlueMotion is standard Polo fare, and in some areas, even better.

The bonus features are automatic air-conditioning, cruise control, funky blue-trimmed seats and, um, that’s about it. 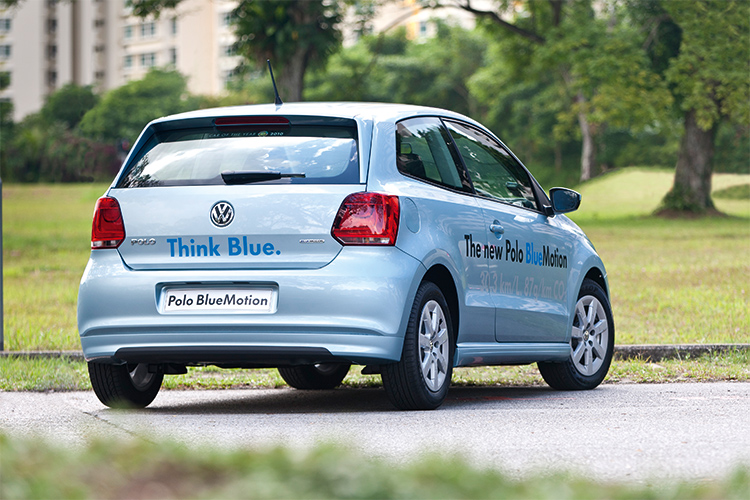 In the interest of weight saving, the car gets manually adjusted wing mirrors (which are fine) and a basic key fob with no remote lock/unlock (which is not fine).

Behind the wheel, the Polo BlueMotion feels solid and its suspension is tuned towards comfort, which encourages a relaxed driving attitude and provides a smooth ride.

At a shade under $87k, the Polo BlueMotion costs the same as the 1.2-litre turbo Polo Sport.

Coupled with hefty, uniquely Singapore taxes for diesel passenger cars, the Polo BlueMotion is likely to be a rarity on our roads.

It’ll be cool to run one as an eco-conscious long-termer in conjunction with Volkswagen Singapore’s “Think Blue” campaign, but if I had to pay out of my own pocket (which is not deep at all), the Polo BlueMotion just doesn’t make financial sense.

Check out the 1-litre Volkswagen Golf