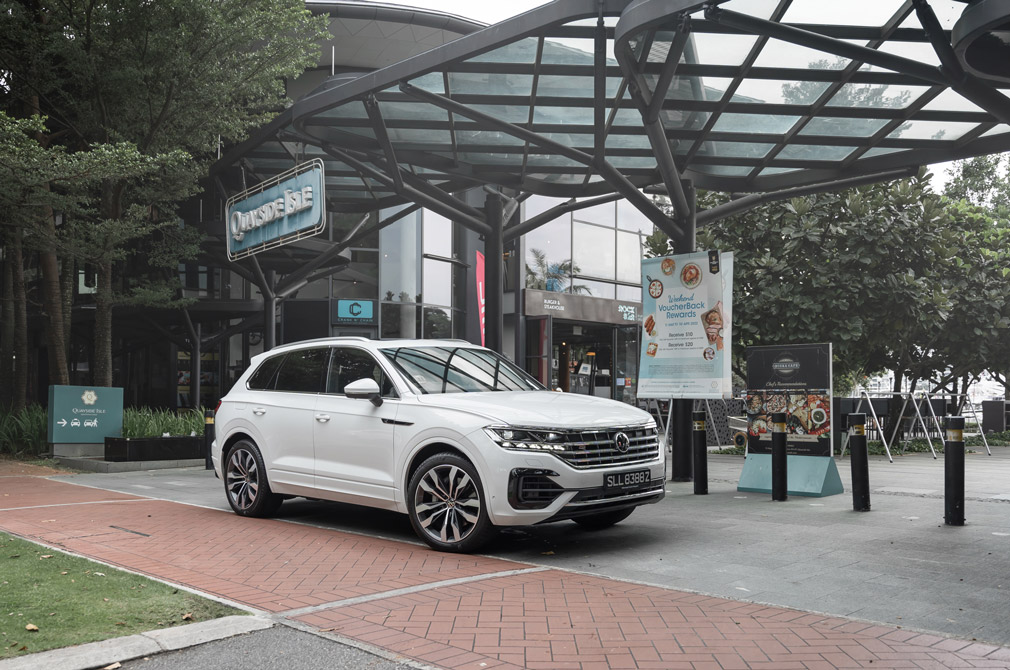 When the Volkswagen Touareg debuted here three years ago, several things about it stood out.

It was the most powerful model in VW’s local range and its over-$300k asking price reflected its true status: As the most expensive model in the line-up, it wasn’t just the flagship SUV – it was the flagship, period.

Consequently, the absence of such a significant model was a palpable one. The only other possible flagship is the Arteon fastback, but it, too, has been unavailable. (VW says the facelifted model will reach Singapore later this year.)

The Touareg may not be viewed as a luxury car, but its equipment levels and asking price, especially given current COE premiums, certainly put it in the same field.

The Touareg is not all-new or facelifted. To be precise, it is an updated model. Two versions of the Touareg are available – Elegance and the top-spec R-Line. The former is currently priced at $366,900 while the latter is going for $399,900.

The Touareg Elegance now has goodies previously only found on the R-Line. These include Adaptive Cruise Control, soft closing doors (power latching) and a new steering wheel with paddle shifters and capacitive touch buttons. 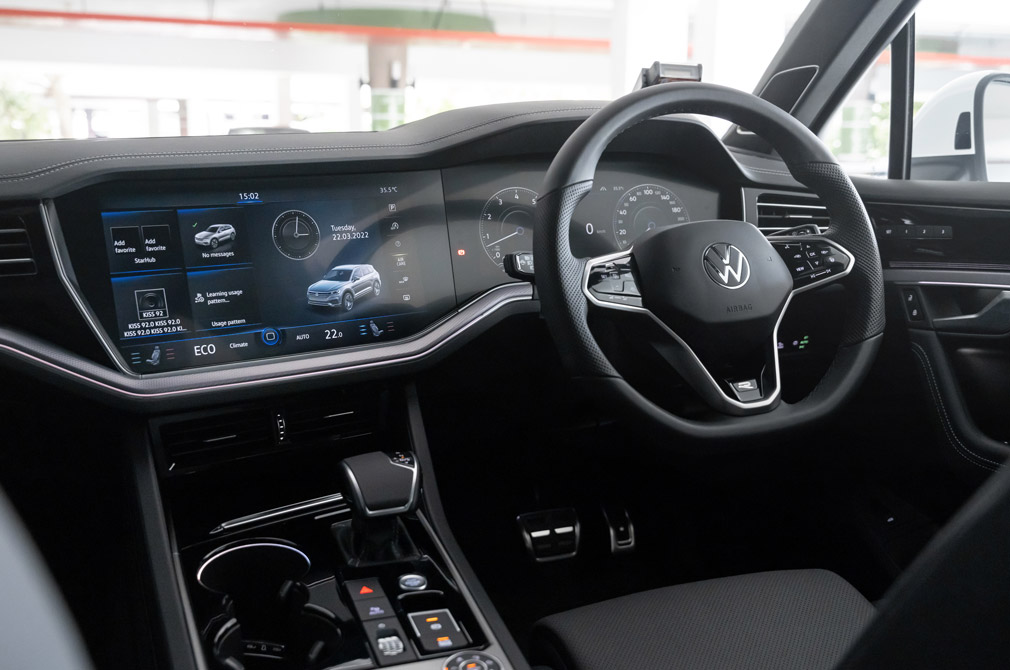 Arguably the most important feature that’s now standard on both variants is the 360-degree Area View Camera. Neither the Elegance nor the R-Line had it when this generation Touareg was introduced here. Depending on your driving skill, parking this sizeable SUV was either a relaxed or nerve-wracking endeavour.

If your experience is the latter, then the new Park Assist Plus feature should help you relax. When engaged, the system automatically guides the Touareg into parallel and perpendicular parking spaces – all the driver has to do is keep the Park Assist button pressed. 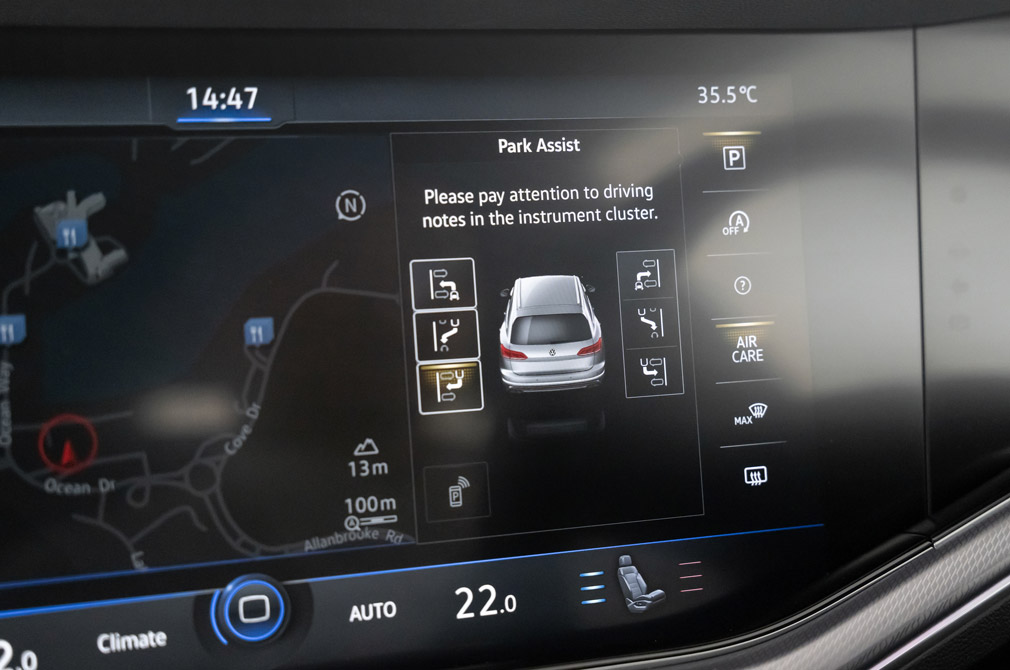 Park Assist is upgraded to Park Assist Plus, which automatically performs parking manoeuvres.

Still doing duty in both versions of the Touareg is the silky smooth powertrain, comprised of a turbocharged 3-litre V6 paired to an 8-speed automatic.

The V6 produces 335hp (340PS) and a very useful 450Nm. These outputs are routed to all four wheels via the 4Motion all-wheel-drive system. Performance here remains identical, with the SUV taking 5.9 seconds to accomplish its century sprint.

“Fast” is relative and requires context. In the Touareg’s case, it is half a second quicker than the current Mk 8 Golf GTI – despite weighing over 2.2 tonnes.

What’s even more impressive, though, is the SUV’s refinement. It doesn’t feel fast. The cabin remains well-insulated from wind and road noise. This R-Line model also comes with air suspension as standard. In the Comfort setting, you get a very agreeable and plush ride. 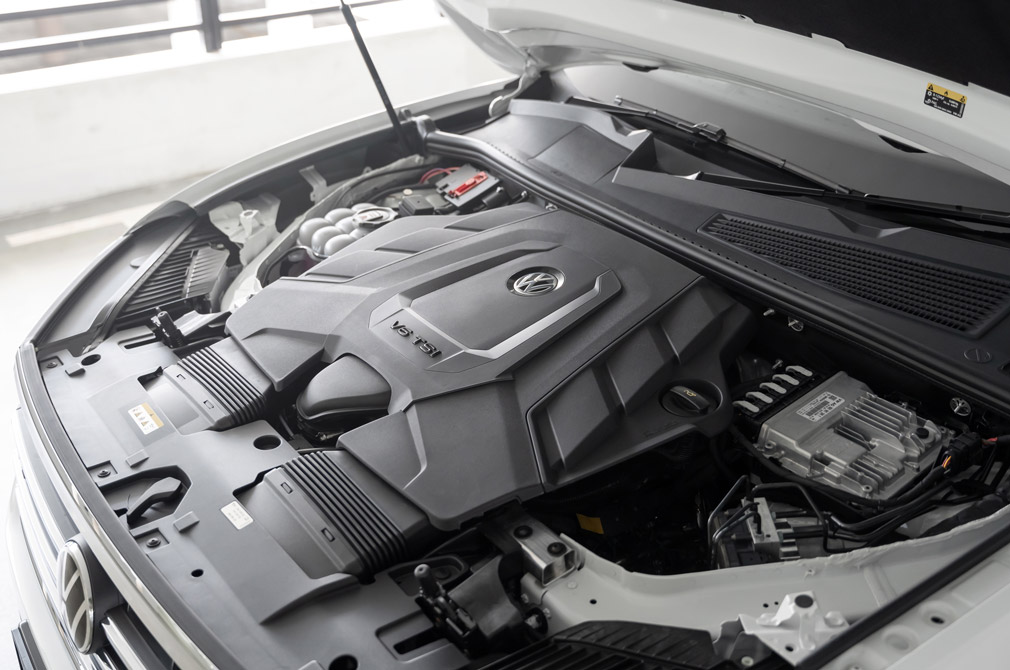 Apart from enabling drivers to tweak the ride quality, air suspension also offers another neat trick: To facilitate the loading and unloading of items (especially heavy stuff), the car’s rear end can be lowered by 40mm.

In addition, the R-Line variant has another useful feature: rear-wheel-steering. At speeds up to 37km/h, the rear wheels steer in the opposite direction to the front ones, reducing the turning radius by a metre to 11.19m. That helps when manoeuvring in tight carparks and making three-point turns.

Above 37km/h, the rear wheels are steered in the same direction as the front wheels for better stability.

The Touareg R-Line is the plushest and most refined VW you can acquire today.

It comes with even more bells and whistles than before, and offers more than enough room for five and their luggage, courtesy of its huge 810-litre boot. And though you won’t need it in Singapore, 4Motion means the Touareg has off-roading abilities as well.

It should once again give buyers who are looking for an SUV to replace their executive saloon plenty to consider. 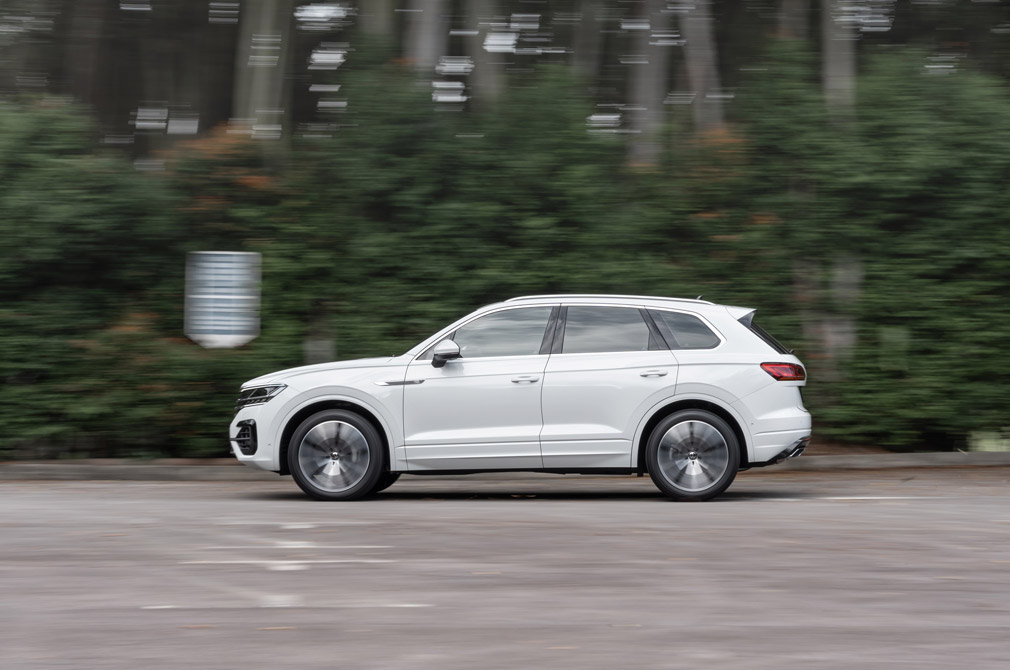 Click here for our review of the facelifted Volkswagen Tiguan