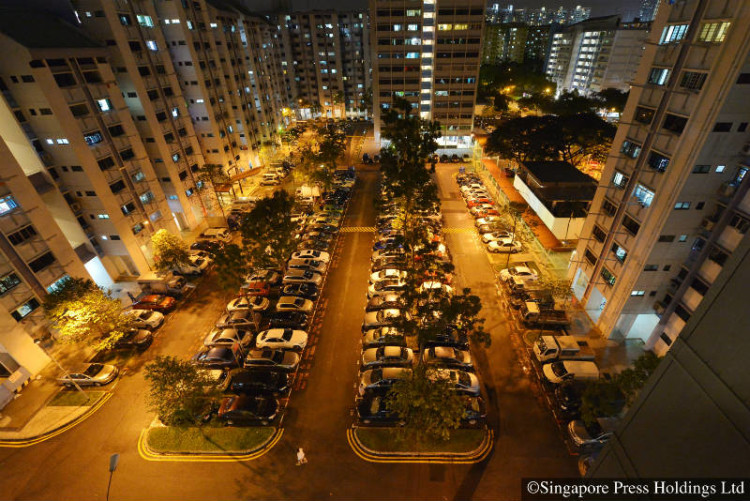 An HDB carpark at night. The Government is obliged to provide roads, because these are vital for business. But it is under no obligation to provide private parking space for cars below market rates, which it is doing now in HDB estates, schools and for its staff in some buildings.

Cities should be planned for people, not cars. But transport is also an absolute necessity. How can both needs be met?

Senior Transport Correspondent Christopher Tan raised this perennial issue in his article Can Singapore go car-lite? This time, he tackled the issue from the angle of parking.

In its efforts to control congestion, the Singapore Government has put too much emphasis on purchase price and not enough on running costs.

In London, Tokyo and New York, cars are cheap. But parking is expensive. Only the richest drive to town. Will such a solution be effective in Singapore?

Let’s work on the premise that the public should not subsidise motorists, but neither should motorists be penalised with charges that cannot be directly linked to their impact on society. Imagine a scenario where motorists pay the market rate for parking, but are free to own cars, also at market prices for the vehicles, without any extraordinary taxes.

The Government is obliged to provide roads, because these are vital for business. But despite Electronic Road Pricing (ERP), it is unlikely that the full land and construction costs are being recovered without some cross subsidy from other taxes. This anomaly is unavoidable in transport calculations. But any proposals to go car-free are mere pipe dreams that will bring commercial and social activities to a halt. However, the Government is under no obligation to provide private parking space for cars below market rates, which it is doing now in Housing Board estates, schools and for its staff in some buildings.

Taking warehouse rents per sq ft as guidelines, a season parking space can justifiably be charged at between $700 and $1200 per month in town, and perhaps about $400 per month in HDB estates. The former are equivalent to charges in major European and Asian cities, where hourly parking costs about $10. In those places, lower- and middle-level staff often own cars, but do not drive to work. They get there by public transport, and use their cars for leisure, having practised the Weekend Car lifestyle long before Singapore introduced the concept.

In Singapore, a $100,000 car can be bought with a bank loan. The costs are fixed, however much the car is used. But in charging for usage, costs cannot be financed, are recurring and variable.

If we assume that a family saloon car is instead priced at $30,000, which is what one would pay in Japan, the US or Britain, but that the user has to fork out $600 per month for parking and ERP charges (without ever taking the car to the office), over 10 years, the total paid to the State would be about the same. But the car owner would be constantly reminded of the pain.

As for the provision of parking in office and commercial buildings and in private residences, the Government is right in leaving such decisions to the market. Developers will very soon find out what their customers demand. A commercial block without sufficient parking for tenants, staff, business visitors and customers will soon have to either lower rents, convert more space for parking, or fall vacant.

Christopher Tan noted in his article that, despite being accessible by MRT, the new National Art Gallery Singapore – and its adjacent, expensive eateries – provides two levels of parking.

Its planners obviously knew the demands of their high-brow, high-class clientele. Will the Urban Renewal Authority dare to proceed with zero parking in its developments for the new Downtown?

With regard to private residential properties, car owners are prime prospects. Can a developer hope to sell any units if he cannot assure his customers that they can park at home? And that their visitors can park too?

Hand in hand with raising costs in designated parking spaces, the Government has to clamp down harder on illegal parking. Currently, even though traffic builds up behind them, many drivers leave vehicles as they please.

Though both National Development Minister Lawrence Wong and Transport Minister Khaw Boon Wan hinted recently that current parking policies are too generous, will this Government actually pay the political price of telling Singaporeans that the true cost of driving cars must include market-rate parking charges, and that car ownership will eventually become the preserve of the elite?