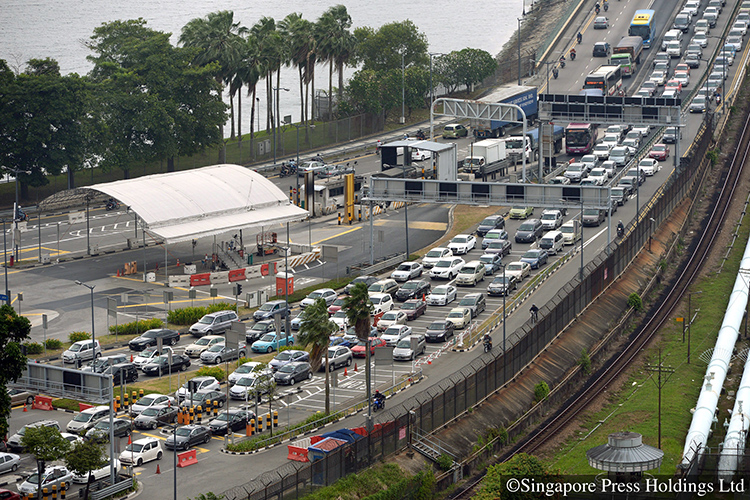 A long line of vehicles on the Causeway waiting to enter Singapore at 5.45pm on January 23, 2014.

Motorists can expect long queues due to the checkpoint jam at Causeway over the Chinese New Year period, with some travellers reporting delays of more than three hours before clearing Malaysian Customs on Friday.

Traffic is likely to build up even more in the coming days.

Designer Kelvin Tan, 30, who drove his family to Johor Baru on Friday evening to visit relatives, told The Sunday Times: “We left after 8pm but were stuck in a bad traffic jam for almost four hours. It was so packed, everything came to a standstill.”

Madam Sarah Ong was also unprepared for such a massive checkpoint jam as she left her home at 5am yesterday.

“I expected that there would be a slight delay with the traffic, but I did not expect to wait more than three hours to cross the Causeway and clear Customs even in the early hours,” said the 52-year-old housewife.

With many Malaysian workers heading home for the extended holiday period, some set off early to avoid the rush but the congestion was so bad that some bus passengers reportedly decided to alight and walk across the kilometre-long Causeway instead.

There are more than 400,000 Malaysians living and working in Singapore.

The Immigration and Checkpoints Authority (ICA) said it had opened all departure counters in anticipation of this peak period.

From Friday afternoon, ICA has been posting hourly updates online of the traffic situation at Singapore’s two land checkpoints, Tuas and Woodlands, with most updates warning of heavy traffic.

At 6pm last night, travelling time across the Causeway was estimated to be 45 minutes.

At 9.05pm, the ICA said on Facebook that the departure traffic at the two checkpoints was smooth although a “backflow of traffic from Malaysia at Woodlands checkpoints remains”.

It advised travellers to check the OneMotoring website before embarking on their journeys.

On a regular weekday, it is estimated that more than 50,000 vehicles use the two crossings – with even more on weekends – making it one of the busiest borders in the region.