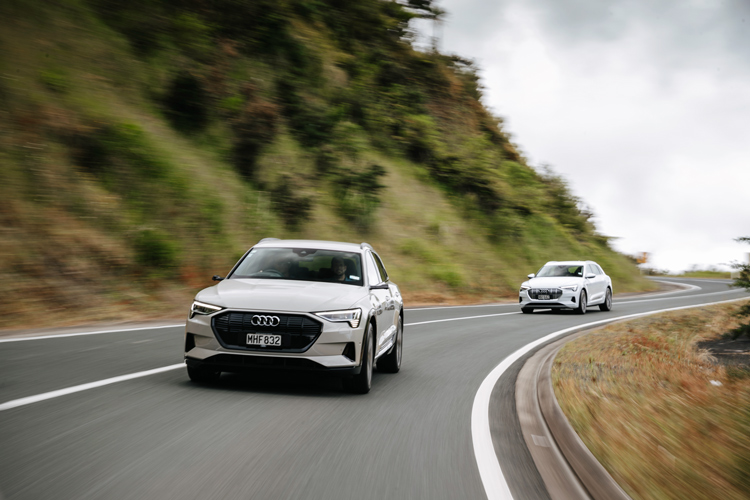 The last time I was in New Zealand, I searched for hobbits. In The Lord of the Rings, hobbits are described as being half as tall as the average man. They have hairy legs and little or no magic in them.

My search then was successful as one of them turned out to be my fellow journalist, the editor of SgCarMart. He has hairy legs and no magic in him.

I hope he has a poor memory and has forgotten that story I wrote, for he is one of my bosses now.

Hobbits were not part of the itinerary this time around. I was here to try the Audi e-tron, the German marque’s first EV. Like most manufacturers, their first effort at electrification is an SUV.

We were driven by a chatty taxi driver from the airport to the hotel. When she is not driving non-communicative tourists like us, she drives an ambulance to save lives.

I realised I had to entertain her as a matter of courtesy. Thankfully, I had read the specifications of the Audi e-tron earlier that morning and rattled off the specs to her. 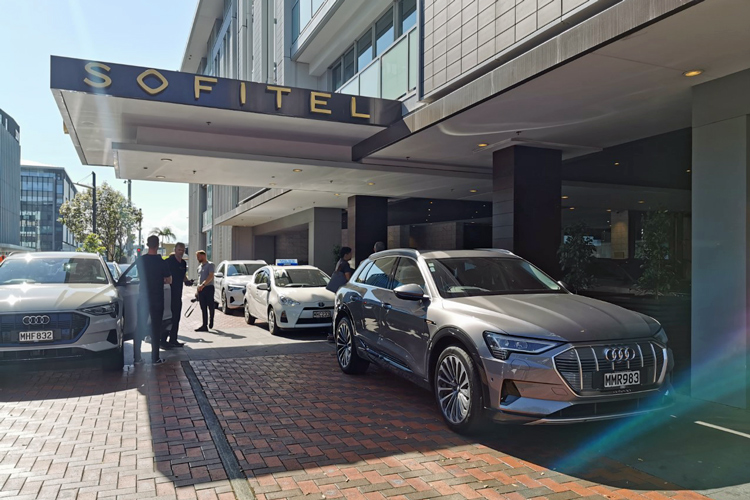 I was certain she was impressed. When we arrived at our hotel, I think she wanted my number but was too shy to ask. I would not have given it to her anyway.

We were put up in the Sofitel Auckland Viaduct Harbour hotel, one of the best hotels in the city. I spent my first afternoon chilling by the marina with a German beer in hand.

The next morning, I paired up with a buddy who is a man of few words, unlike that aforementioned new boss. Oops, there I go again.

Our Audi e-tron was black and beautiful. With crisp lines and an uncluttered profile, it looks like a cross between an Audi Q5 and an Audi Q8.

And it feels like a Q5 on the road despite its hefty 2490kg weight. Most of the mass comes from the liquid-cooled lithium-ion battery. It consists of 36 modules, which can be replaced individually if any are faulty. 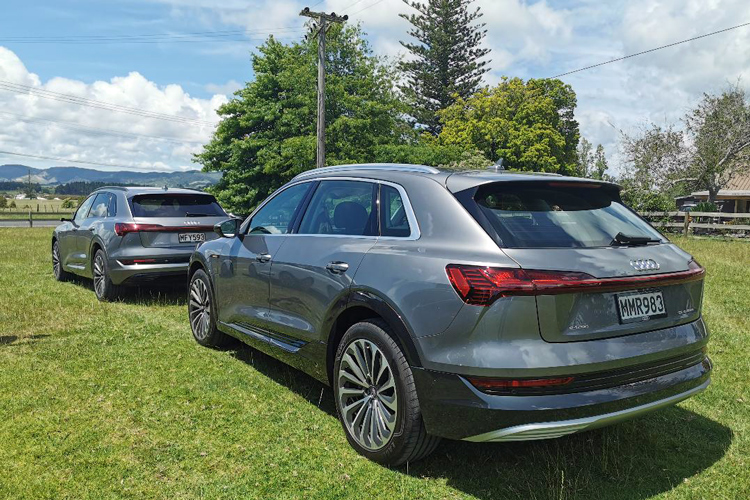 The whole battery pack is nestled low between the front and rear axles for a low centre of gravity.

The claimed range is a little over 400km and we had a 132km drive to our lunch destination in Sculptureum, north of Auckland. I therefore did not have to suffer from range anxiety along with my bladder problem.

My co-driver drove for the first hour. When I took over, the first thing I discovered was that it was difficult to moderate the brakes with my size 42 foot.

But once I started to feather them, I discovered that they were smooth and powerful!

Fifteen minutes later, we stopped at a petrol station. Someone’s bladder was bursting, and I was glad it was not mine.

We then made our way up to hilly Tauhoa and stopped for a photo opportunity. 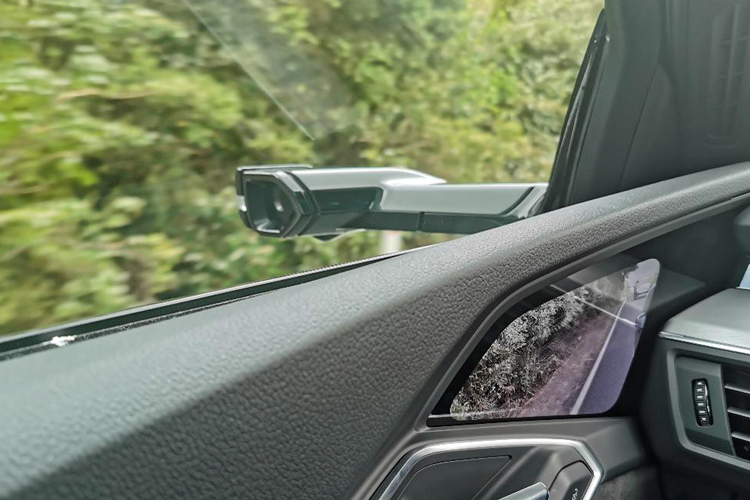 Trying out the new kit

There, we swopped cars and my co-driver took over. We got into an Audi e-tron with the optional virtual wing mirrors, where instead of mirrors, there are cameras.

The result is a slimmer and more aerodynamic design that reduces the drag coefficient by 0.01 to 0.27.

The cameras broadcast live footage on a video screen beside the A-pillar. They take getting used to because your eyes naturally aim for the external appendages rather than the cabin doors. 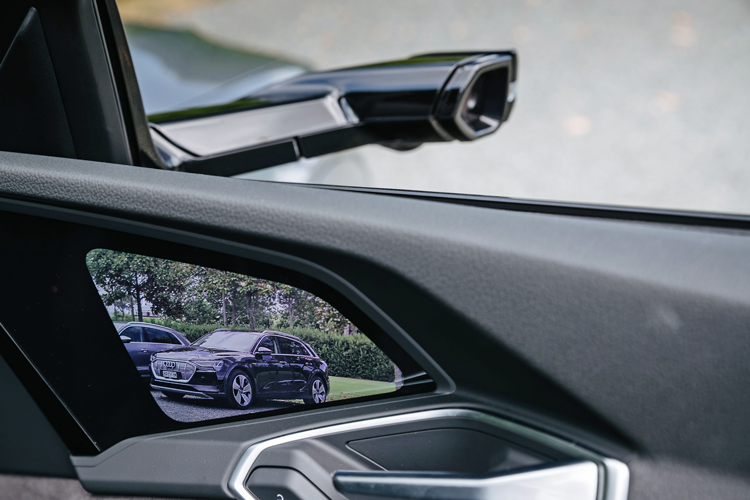 On the way, I noticed the driver in the Audi e-tron in front braking at almost every corner.

I realised later that the Audi e-tron was automatically self-braking. This happens when coasting is not possible, such as when descending an incline.

The auto-braking recuperates energy to recharge the battery and improve range.

The Audi e-tron is also equipped with a full brake-by-wire system. Audi says this system weighs 30% less than conventional braking systems and shortens stopping distances by up to 20%. 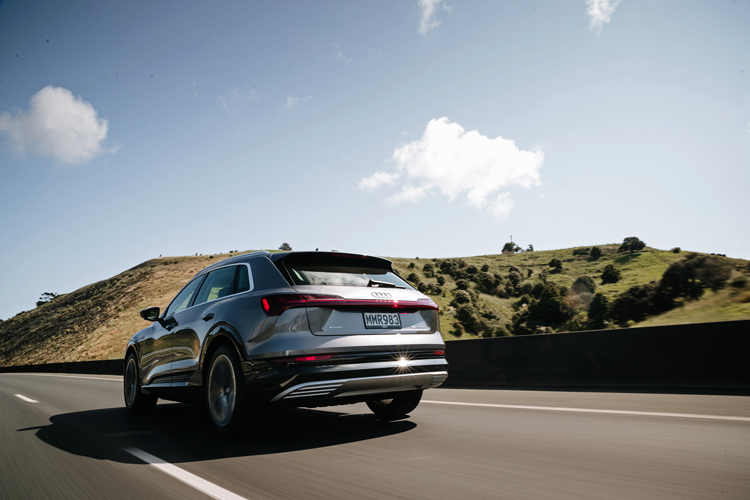 Many modes for different moods

When we arrived at Sculptureum for lunch, the Audi e-tron’s remaining range was 260km. Thus far, we had driven here with the SUV set to mostly “Auto” and “Dynamic”.

The Audi e-tron has more settings than any other car I have driven. There is “Efficiency”, “Comfort”, “Auto”, “Dynamic” and “Individual”.

But even in “Efficiency” mode, there is plenty of kick-down power, thanks to the two electric motors (one on each axle). That makes the Audi e-tron an all-wheel-drive, and the “quattro” badge on the tailgate confirms this. I headed for the toilet as my bladder was quickly filling up. Lunch at Rothko restaurant was a leisurely affair of fresh Mahurangi Oysters, Aged Beef Scotch, Confit Lamb Shoulder, Banana Prawns and Charred Broccolini.

After filling our stomachs, I visited the toilet again. Before the second leg of our drive back to Auckland, I checked out the backseat of the Audi e-tron.

Because of the electric motor on each axle, there was no central transmission tunnel. So, three adults can comfortably sit abreast.

Recharging not required yet

The charging cable is stowed in the front compartment or frunk. Charging the Audi e-tron from your home electrical power point at up to 11kW takes about nine hours.

It can also be plugged into 150kW DC charging stations. With DC charging, the Audi e-tron takes 30 minutes to fully charge.

When it was time to hit the road again, I kindly offered the driver’s seat to my buddy. The silent Audi was very conducive for napping. There was only a hint of electric motor whine. And the Goodyear Eagle F1 Asymmetric SUV tyres helped maintain the cabin’s serenity, too. 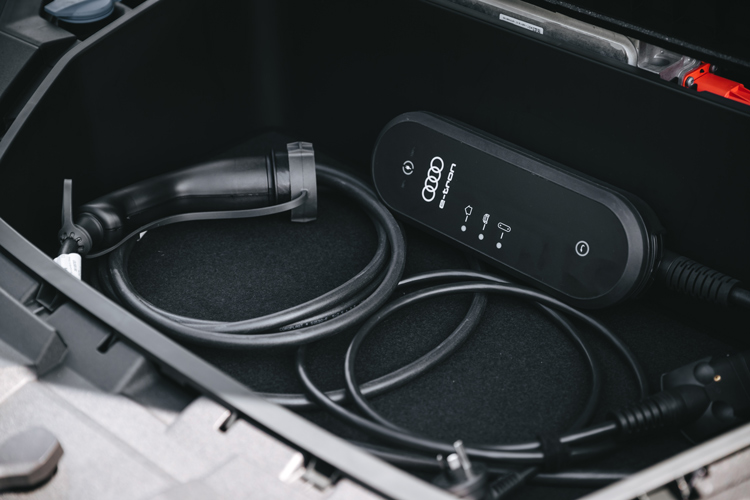 I awoke about 35 minutes later. We had stopped at a lay-by to wait for the other cars in the convoy to catch up. My bladder signalled me again, so I made my way into the forest to water the flora.

I assured my friend that I had cleaned my hands with some wet leaves, even though it was mid-afternoon and sunny throughout the day.

By the time we arrived at the hotel, there was still 141km left in the battery “tank”.

Before dinner, I returned to the marina with a Dutch beer in hand to reflect on the day’s events. I realised I had not seen a single sheep in a land that was home to 27 million woolly goats. 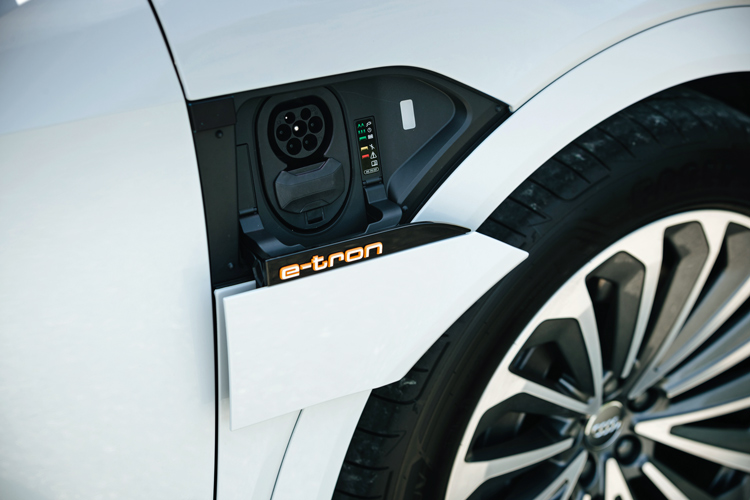 So the next day, I strained my eyes trying to spot them. This time our 77km route took us south of Auckland via the Hunua Ranges Regional Park. Our lunch destination was Hinge & Co.

In the “Auto” setting, the Audi e-tron felt planted and composed on tight and winding roads. In this mode, the powertrain, steering and suspension are left to their own devices to tackle whatever the road throws at them.

Putting the e-tron in “Dynamic” firms up the damping by a notch but it’s never uncomfortable. The Audi e-tron does zero to 100km/h in 5.7 seconds and its top speed is limited to 200km/h. I guess this is to conserve the battery for maximum range.

The steering is light but not imprecise. I did not have to second-guess my lines. This was just as well, as I was trying to spot sheep in the shining sun. 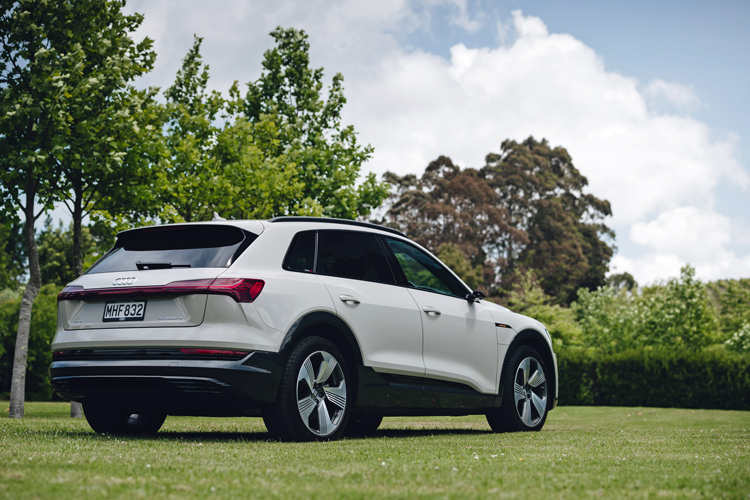 By the time we arrived at Hinge & Co in Clevedon, I still hadn’t seen any sheep. Lamb wasn’t on the menu either. I ordered Spice Pork Tenderloin with quinoa rice, Asian greens and chilli sauce

What I really wanted was some roasted pork rice with chilli. But when the order came, I knew the chef had never eaten sio bak peng.

After lunch, I wandered around the area and finally spotted some sheep behind a fence. I kept my ears peeled to hear the lambs bleating, but they remained silent like the Audi e-tron.