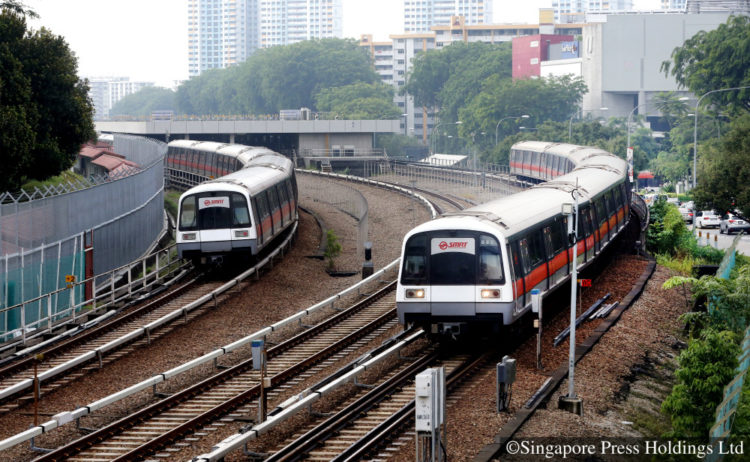 The photo in The Straits Times and accompanying story were widely shared on social media.

The image showed a difference in thinking between the older gentleman, aged 62, and his younger helmsmen – SMRT group CEO Desmond Kuek and SMRT Trains CEO Lee Ling Wee, both in their early 50s.

Mr Seah clearly felt bowing was a necessary act of contrition for the disastrous first-time flood-induced breakdown of the North-South Line on Oct 7. But Mr Kuek and Mr Lee clearly did not.

Singapore does not have a corporate culture of bigwigs bowing when something goes wrong. This is in sharp contrast to Japan or South Korea, where the entire entourage of top executives would have bowed deeply.

The picture of Mr Seah bowing alone set the stage for what Transport Minister Khaw Boon Wan was to say later at the press conference held jointly by SMRT and the Land Transport Authority (LTA), the public transport regulatory body, on Oct 16.

To a question on whether SMRT would be fined for the flooding – which disrupted service on a large section of the line for some 20 hours and which inconvenienced more than a quarter of a million commuters – Mr Khaw said he would prefer not to “go back to this old system of penalties and fines”.

“It created a very adversarial relationship between the regulator and the operator,” he said.

“When you have this acrimonious relationship, it is very difficult to achieve excellence.”

The minister’s sentiment has merit. Unity is strength, after all.

And when faced with a seemingly indomitable task of improving reliability on our rail network, the last thing we want is disunity between key stakeholders.

But there should be a distinction between unity and accountability.

Unity – or working together on a problem – surely does not mean breaches go unpunished.

The relationship between regulators and the regulated should rightly be an uneasy one.

Otherwise, regulatory capture might arise. This is when the public sector tasked with regulating a private entity acts in a way that advances the interest of the company, instead of protecting public users. The theory was developed by the late Nobel laureate, economist George Stigler.

It is a risk governments worldwide have failed time and again to address fully.

For the flooding incident, it is clear that maintenance lapses were to blame, even if the design of the pump system was questionable.

But it cannot be that the maintenance crew and its supervisors are the only ones facing the music. SMRT as an organisation, starting with the top management, should shoulder the responsibility too. Otherwise, an apology – with or without bowing – rings rather hollow.

SMRT has already removed and redeployed its senior executive, Mr Ng Tek Poo, who was in charge of maintenance and systems. Mr Kuek explained that Mr Ng was removed so that an investigation into the team’s entire workflow, processes and culture could be done in a more open and transparent way.

Also, the SMRT maintenance team, which failed to properly maintain a flood-prevention system at Bishan MRT station, will have their bonuses cut.

But whose place is it to judge the culpability, if any, of Mr Kuek and his lieutenants?

In Singapore, the operators are mostly left to clean house on their own and decide where the buck stops, except in 2011 – the year two massive breakdowns led to a public inquiry and a management shake-up at SMRT.

Ironically, SMRT’s network has experienced worse incidents since then, including Oct 7’s flooding. Surely, top honchos who are credited when things go right should share the blame when they go awry. In Hong Kong, top MTR executives face pay cuts if rail services are disrupted severely or repeatedly.

On its part, the LTA, as regulator and builder of the MRT system, should stand up and admit that the pump circuitry at Bishan can be improved. (The older lines were built by MRTC, which was one of the predecessors of the LTA.)

There are three pumps, each activated by a float switch as the water level rises and a fourth kill switch that can prevent all three pumps from working. This fourth switch failed that fateful day, along with another component that would have set off an alarm at SMRT’s control centre.

The existing design undermines the redundancy and resilience of the flood prevention system. A resilient system would have been more forgiving of human errors.

If Mr Khaw wants SMRT and LTA to be more united, both sides, not just one party, must openly admit to flaws. The Bukit Panjang LRT (BPLRT) is another example of this one-sided relationship.

Even if SMRT is far from blameless for the 18-year-old line’s unending woes, the LTA has not admitted openly that the LRT line had design shortcomings.

It took Second Minister for Transport Ng Chee Meng to say in Parliament earlier this month that the BPLRT’s design was adapted from an airport inter-terminal transfer system.

With just a tinge of exaggeration, such an adaptation is almost akin to using a baggage carousel system as a travelator. In an airport transit system, the tracks are relatively straight. But in a housing estate, you want the line to serve as many blocks as possible, and so there is bound to be a lot more twists and turns. Hence the trains’ power-collecting system for the latter will have to be designed to withstand repeated sharp turns.

It has taken 18 years for this admission to surface.

Would the problems have been fixed earlier if previous leaders had openly acknowledged the design flaw? After all, being able to fix a problem has to start with admitting that it is a problem in the first place.

Of course, not all the problems with the BPLRT are to do with not customising its components for its alignment. Many of them are down to weak maintenance and an inability to spot systemic weaknesses.

On that front, it is now clear there is an engineering deficit in the rail industry here that needs urgent fixing. SMRT says it has beefed up its team of engineers by more than 150 percent in the last four years, and aims to increase the ranks by another 40 percent by 2020.

This is commendable. But it is unlikely to solve immediate challenges. These require, first, experienced rail engineers (those with a deep understanding of rail infrastructure, systems and components), and second, a battalion of technicians who actually do most of the heavy lifting in the tunnels.

And because the resource pool for such workers is rather limited here, it makes sense for Singapore to seriously consider having one rail operator. Currently, the pool of expertise is divided between the main rail operator SMRT and SBS Transit, which runs the North-East and Downtown lines.

Again, having one rail operator would be in line with Mr Khaw’s call for unity or joint responsibility.

And if we take it one step further, we should adopt the harmonised strategy of having one entity design, build and operate a network. It is the model used in Hong Kong and Taipei, whose sterling metros we want to emulate.

Also in line with the unity theme would be to tap the eyes and ears of commuters who make more than three million train trips a day.

Their feedback on peculiar noises, vibration or smells along their journeys can sometimes be the first tell-tale signs of problems.

Having a convenient way for them to convey their feedback immediately would be a good move. Of course there is no need to look into each and every piece of feedback, but data analytics can pick up patterns of complaints, which can be addressed.

Lastly, the authorities should recognise that the media is not an adversary. We are a vital listening post. And if some of our stories highlighting the frequency of breakdowns appear unflattering or critical, we make no apology.

Despite rosier statistics on rail reliability, the more serious incidents on the MRT continue to test the public’s patience and shake its confidence in the system.

Downplaying them does nobody any good.