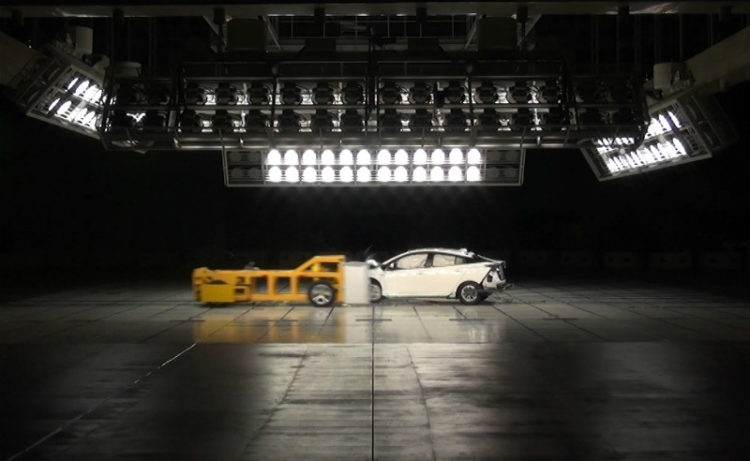 As a boy, I was scared of department store mannequins. In the week after I saw them for the first time in Oriental Emporium, I had nightmares of being chased by mannequins down an endless flight of stairs.

Last week, my fear of store mannequins was replaced by new respect for their high-tech relatives – crash-test dummies. This came about after a “live” crash demonstration at Toyota’s Higashi-Fuji Technical Centre, where about half of the 1600 crash tests carried out by Toyota in Japan last year were done.

Two crash-test dummies were in the front seats of a stationary fourth-generation Prius, which was hit at an oblique frontal angle by a 2.5-tonne dolly moving at 90km/h.

Imagining the impact was dramatically different from witnessing it. Even waiting for it was climactic, because there was a countdown by a deadpan female voice that echoed through the massive hall.

After what felt like another 10 seconds of anticipation as the approaching object was accelerated to 90km/h, it dashed into view about 100m away from the platform I was standing on.

The dolly slammed into the front left corner of the Prius with a loud bang, which I expected. What I did not expect was a simultaneous and equally loud bang from the car’s front and side airbags deploying.

Almost immediately after this, a team of technicians moved in. There was a flurry of activity around the smashed Prius – the men picked up bits and pieces of broken bodywork, looked for fluid leaks from the 1.8-litre engine and fuel tank (there were none) and hooked up diagnostic equipment to the vehicle.

One of the checks on the Prius’ high-voltage battery pack was to confirm that power supply had been cut automatically in the crash. This ensures that the system would not cause any electric shock to occupants or rescuers.

Incidentally, crash-test cars like this one have safety petrol – a non-flammable substitute – in their tank.

Meanwhile, the busy personnel turned their attention to the dummies. Their first task was to reach them. With the bonnet of the car damaged so badly and the front left fender crumpled into a metallic mess, I wondered whether the driver’s door (it was a left-hand-drive Prius) could be opened without using a crowbar.

A Toyota technician, wearing safety gloves, grasped the door handle and pulled the door open. He did not need to tug at it, although the hinges were a little stiff. The other three doors opened easily as well.

The cabin’s structural integrity remained intact. And the two crash-test dummies onboard did their job too.

After the crash test, I visited the “break room”, where about 50 of the facility’s 80 dummies were housed, awaiting their next hazardous assignment. The dummies come in various shapes and sizes, and represent different age groups and genders – adult males, adult females, children, teenagers and even pregnant women.

The one that stood out had “Thor” printed clearly on its chest. Short for the Test Device for Human Occupant Restraint, it might not be the most heroic in the business, but it is certainly one of the most expensive.

Thor is one of Toyota’s 15 crash-test dummies that cost more than 100 million yen (S$1.3 million) each. These are state-of-the-art anthropomorphic mannequins, equipped with sophisticated sensors. The cheapest dummy in Toyota’s employ is an 18 million yen Hybrid III, an international model used by major automakers. The two dummies in the crash-tested Prius were Hybrid IIIs.

These things have to be tough because they are meant to be reused over and over again. The longest-serving dummy in the Higashi-Fuji Technical Centre is 10 years old.

After getting to know these crash-test dummies better and seeing a crash test in person, I drive even more defensively to avoid becoming a real-life crash-test dummy myself.