Father, son and daughter all fall for the same Seat | Torque
Loading posts...
0 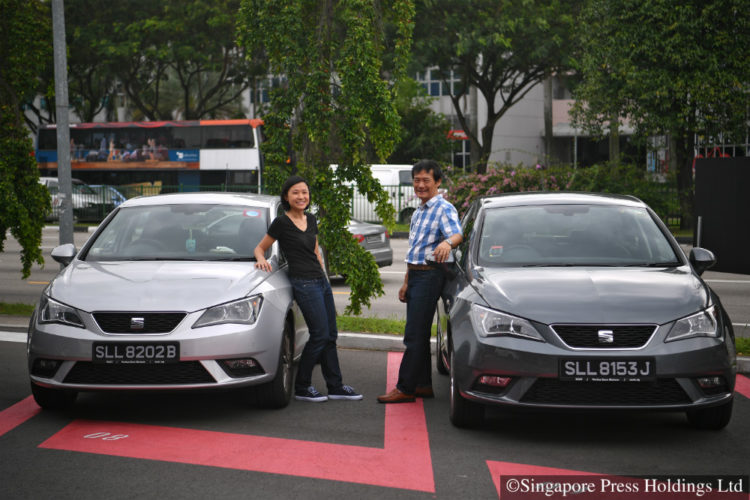 Ms Pauline Koh and her father, Thomas, each bought a Seat Ibiza supermini on the same day.

They are neither brand ambassadors for the Spanish car brand nor related to its local dealer Vertex Euro Motors.

Pauline, Mr Koh’s daughter, was the first among the three to buy the Ibiza in April this year. The 32-year-old physiotherapist needed to replace a Mitsubishi-i whose certificate of entitlement (COE) was about to expire.

“I do not know much about cars, so I asked my brother for advice,” she says. “I was looking for something small and easy to drive.”

Her 38-year-old brother, a civil servant who did not have permission from his employer to be named or photographed, shortlisted the Seat Ibiza and Ford Fiesta for her.

“I read newspaper reports on Seat making a comeback to Singapore,” he says. “I did research online and found that the Ibiza is a suitable car for my sister.”

The Spanish carmaker, which is part of the Volkswagen Group, returned to Singapore last year after a 13-year absence.

Ms Koh test-drove the Fiesta and Ibiza, with her brother and father.

Before she bought the car, her father decided to buy the same car too.

Mr Thomas Koh was then driving a nine-month-old Japanese sedan.

“The rear suspension creaked when the car went over humps. And the dealer did not fix it. There were also other problems,” he says. “I got fed up.”

Eventually, he picked a grey Ibiza and Ms Koh, a silver one.

“It was a slow weekday and the salesman sold two cars to walk-in customers. He must have been the happiest Seat car salesman that day,” he says.

Mr Koh, who has been driving since 1977, has owned cars such as a Datsun 100A F-II, several Toyota Corollas and Coronas, a Mercedes-Benz E220 (W124) and a parallel-imported Honda Accord.

About a month after they bought their Ibizas, Mr Koh’s son also decided to buy one, trading in a Subaru Forester sport utility vehicle.

Mr Koh’s two children are married and live separately, but once a week, they drive their Ibizas to the parent’s semi-detached house in Serangoon Gardens for dinner.

On why she bought a Seat when the brand is relatively unknown here, Ms Koh says: “I am not into branded things. My dad is a frugal person and he has taught us to be frugal since we were young.”

But she admits that she has had to explain her car choice to colleagues whom she ferries occasionally. “When I told some colleagues that this is a Seat, they said, ‘A what?’

“The Ibiza is not as common as other car marques. In that sense, it is unique.”

Related story: She gave up her car for Grab and Uber rides
Related story: Owner of eight motorbikes and a car has never visited a workshop