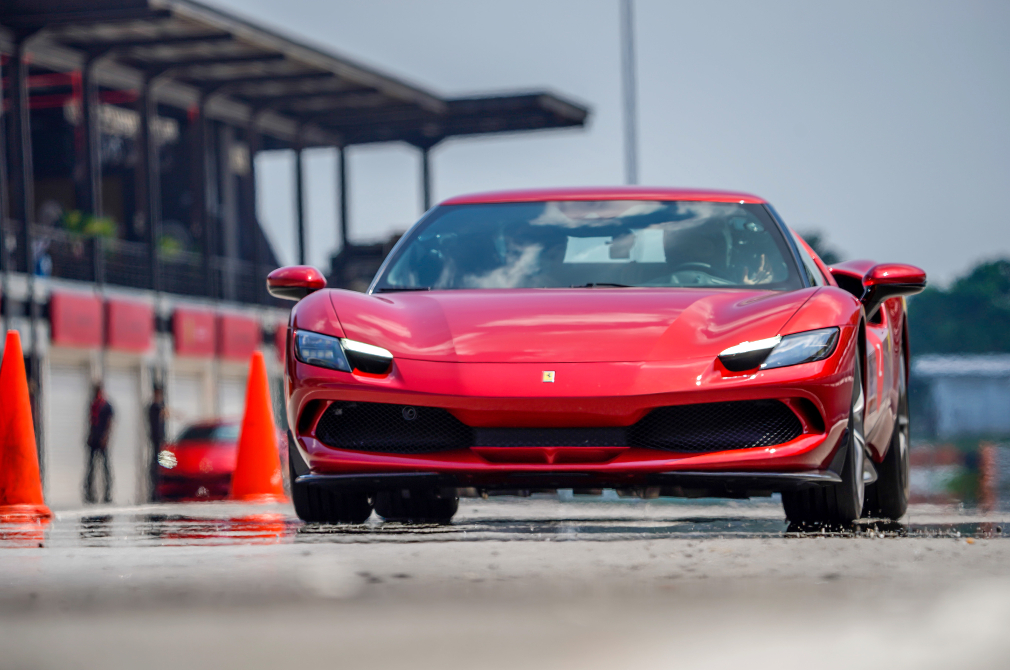 Having just returned the night before from an epic 5-day, 2500-kilometre road trip across Malaysia, it would have seemed insane to turn right around and set off again for Tuas Checkpoint the next morning.

But when there’s a spanking new Ferrari 296 GTB waiting for you in the Sepang pitlane, it would in fact have been madness not to do so.

And after the long trek up the North-South Highway, what a lovely sight the Ferrari is, sitting resplendent in the sunshine in its signature Rosso Imola hue. It’s probably the prettiest Maranello product in years, looking like a tidier, more pert version of its SF90 big brother.

Its knee-weakening looks stem from delectable yet muscular proportions – from that incredibly low needle-nose to those extravagantly arched rear haunches, so reminiscent of the iconic 1960s Ferrari 250LM – and subtle, beautifully-considered details like the fighter plane-like glasshouse and the air intakes integrated with the slim headlamps. 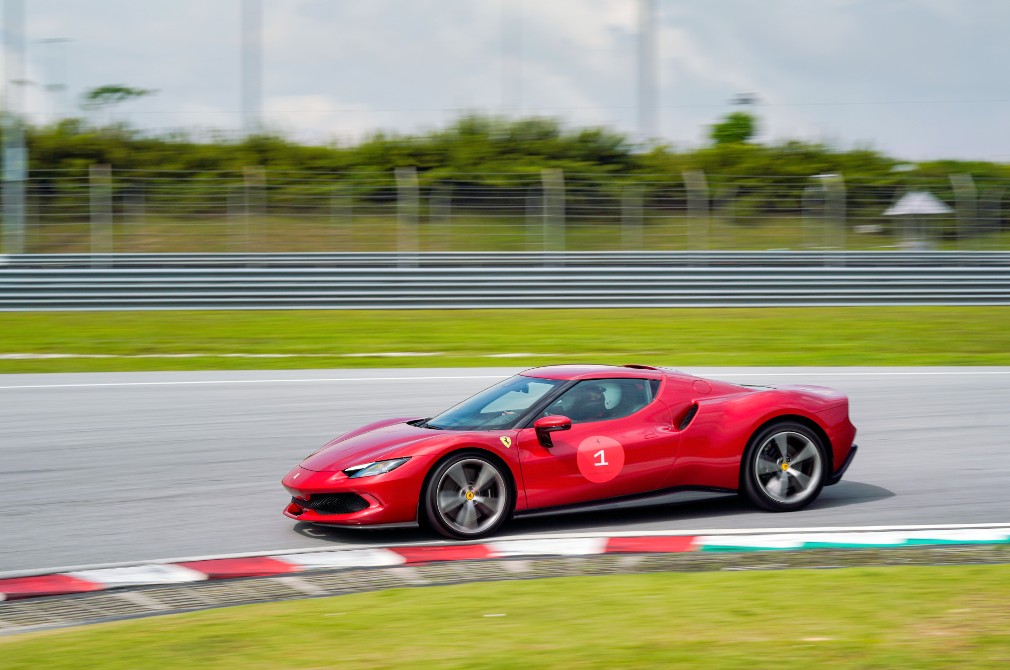 It doesn’t need tacked-on aerodynamic appendages for visual drama. Indeed, there are no such afterthought devices visible, the car deriving its impressive 360kg of downforce (at 250km/h) from its sculpted underbody and by cleverly directing oncoming air through various carefully-planned ducts, slots and passages under, through and around the car’s bodywork to create unseen downforce-generating vortices, as well as by an operable rear spoiler which remains concealed in the car’s broad tail until it’s deployed.

But ensconced in the 296’s cosy cockpit, there is no time to admire its styling. The seats hug you tight and promise to hold you resolutely even through the most extreme forces, the pedals are offset slightly to the right on this left-hand-drive example, and taking centrestage on the instrument panel is a massive yellow rev counter reading to 10,000rpm.

As has been Ferrari’s style for some time now, the steering wheel is the car’s command centre, replete with numerous buttons, paddles, toggles and tiny haptic touch-controls, including the trademark red Manettino dial below the right-hand spoke for you to choose your preferred safety-net level (stability and traction controls etc) depending on how brave you feel.

It can be befuddling for a virgin Ferrari driver, and even for someone returning to a Ferrari cockpit it can take some re-acclimatisation. Regardless, the sense of occasion is palpable – despite their inclination towards Spartan functionality and their scorn for frivolous embellishment, Maranello’s cabins always have a certain aura, and this one is no different.

The view out through that vast, wrap-around windscreen is unimpeded and panoramic, and right now that view is of the empty, beckoning Sepang circuit. I need no further invitation.

The engine – a twin-turbocharged 3.0-litre V6 with a 120-degree V-angle, the first 6-cylinder to ever power a Ferrari-badged road car – revs to 8500rpm and belts out 663 PS, for a sky-high specific output of 221 PS per litre, delivered to the rear wheels via an 8-speed dual-clutch gearbox.

And if that monumental output were somehow remotely inadequate, it is boosted by a 167 PS electric motor driving the rear wheels. Electric power is drawn from a 7.45kWh high-voltage battery with plug-in charging capability (yes this supercar is a PHEV) or by an MGU-K electric motor positioned between the ICE engine and the gearbox.

Either power source (ICE or electric) can work in isolation to motivate the car, but combined they deliver a fearsome 830 PS to the rear wheels alone. 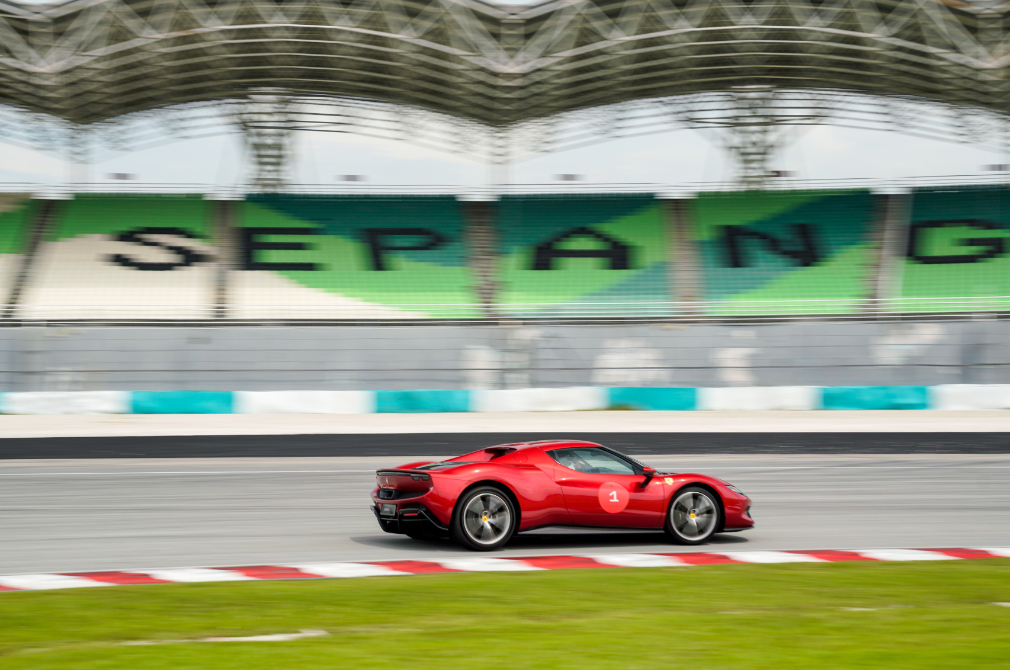 And it is this faintly absurd output that I unleash on the Sepang tarmac as I exit the pitlane. The upshot is warp-speed thrust as the red rocket rips to the end of the 900-metre start-finish straight much, much faster than anything I’ve ever experienced in my 2-plus decades of driving this track.

If anything, Maranello’s quoted 0-100km/h and 0-200km/h times of 2.9 seconds and 7.3 seconds respectively feel massively conservative. If there were any lingering doubts about the V6’s ability to aurally excite, they are instantly dispelled.

The six-pot doesn’t have the banshee wail of the marque’s V8 and V12 powerplants, but its soundtrack delivers its own thrills, with a gravelly yet cultured note that escalates in volume, intensity and menace up to its 8500rpm crescendo.

Even more astonishing is the Ferrari’s braking ability. Travelling far in excess of 200km/h, I keep the throttle pinned as long as I dare before hitting the brakes with all my might – the left-hand pedal is reassuringly firm – and the hurtling Ferrari slows like a giant parachute has unfurled, the nose dips and the tyres claw ferociously into the tarmac to wipe off speed.

Yet the car remains utterly stable and its trajectory stays arrow-straight, without so much as a twitch of steering correction required.

Bashfully I arrive at the Turn One hairpin way too slowly, my addled mind having failed to take into account how mighty the 296’s stoppers are, and having simply refused to believe that the car could slow down so much from such massive velocity in such a short distance.

And no wonder – the 296 can come to a complete halt from 200km/h in just 107 metres – a remarkable 8.8% less than the F8 Tributo. Not only does it go amazingly, it also stops spectacularly. 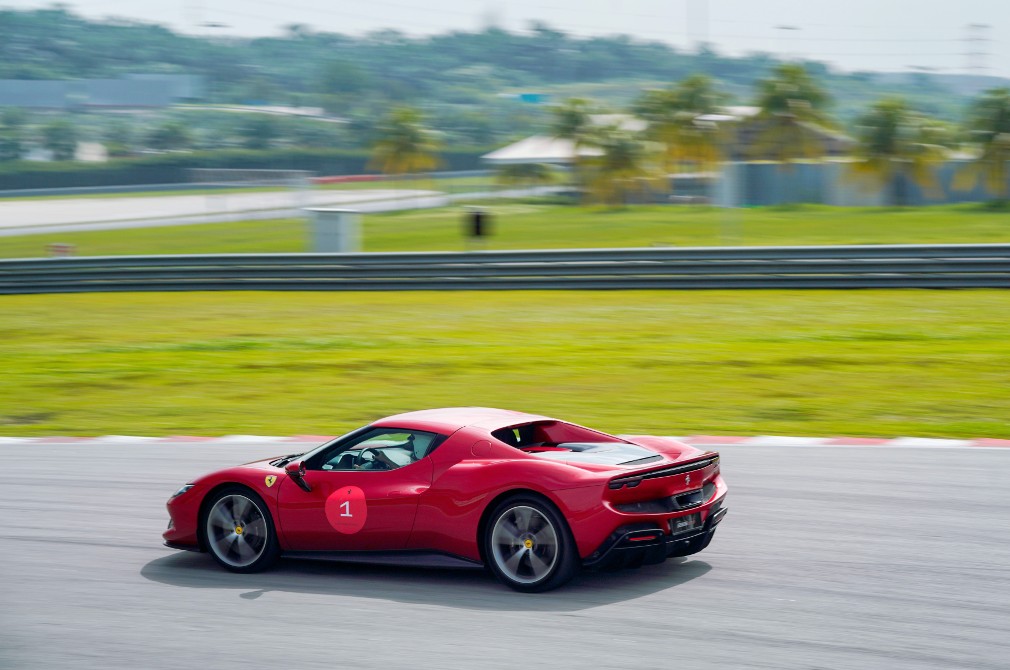 Around the rest of the challenging 5.5-kilometre circuit, the 296 continues to astound. Taking the sweepers at speeds that would spit any other car into the gravel, the Ferrari’s fat Michelin Pilot Sport 4S tyres continue to grip and the car remains reassuringly planted, the tail never threatening to wag.

The quick-geared steering is hyper-alert and unerringly accurate, the feedback through the sculpted rim relaying a detailed running commentary on the state of grip underfoot and giving me the confidence to push even harder.

Thus emboldened, every one of Sepang’s hitherto-familiar corners takes on an alien new dimension as I attack them at previously unimaginable pace.

Being too eager with the throttle out of tighter bends does unstick the tail, but even then all that the car’s alert electronics permit is a cautionary wiggle before the 296 resumes its correct trajectory, utterly unflustered and its pace undiminished.

On one lap I choose to select gears manually via the lovely steering-mounted paddles. 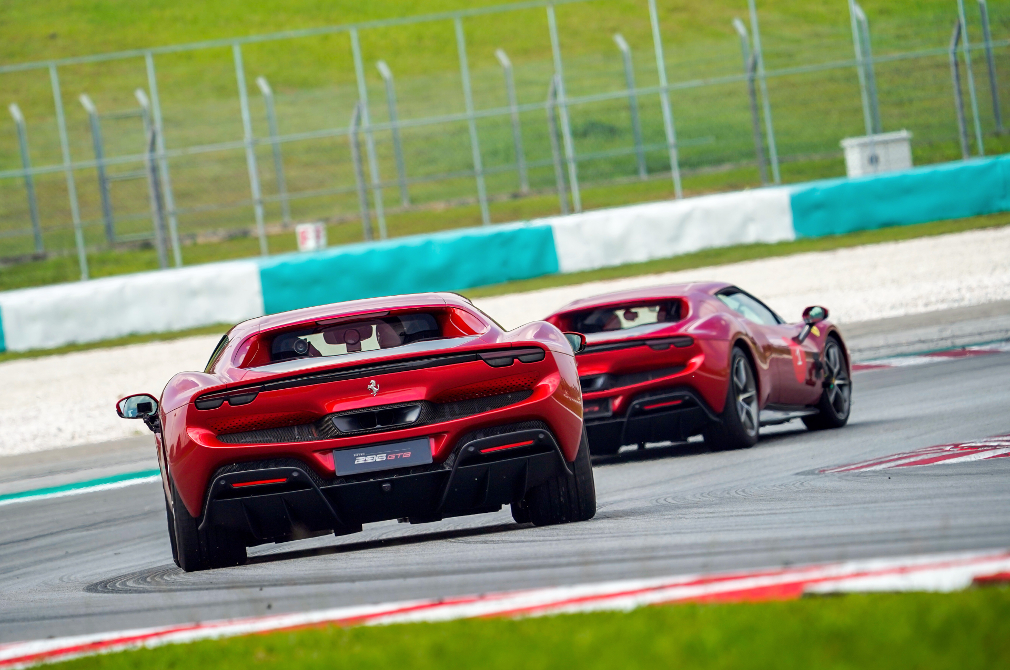 Gearchanges – up or down – are almost telepathic, happening the very instant I tug the relevant paddle, but soon I realise that my judgment and reflexes are no match for those of the 296’s MENSA-level electronics, and I revert to leaving gearchange decisions to the Ferrari’s discretion. It does a far better job too, changing up and down in perfect sync with the car’s speed and selecting the ideal gear in anticipation of each corner, every time.

Lap after lap we belt on at this phenomenal pace, the e-Manettino in full-fat “Qualify” mode for maximum performance, the brakes standing up to endless maximum-retardation abuse without fade and without the pedal going soft, and the disbelieving grin on my face growing ever wider, until eventually my time is up and we ease back into the pitlane.

So I emerge from the cockpit trembling with adrenalin, my balaclava soaked not from the heat but from the sheer visceral thrill of the experience.

And while I stand there quivering and with my mind blown, the car – the one of us that has been doing all the work while I was merely its awestruck passenger – sits there unflustered, aircon running and engine purring at a discreet idle, ready for the next person to strap in and receive the ride of their life.

The Ferrari minder comes over and asks me how it went. My brain hunts vainly for superlatives, because none seems adequate. It is that kind of car, the Ferrari 296 GTB – one that is almost beyond words.