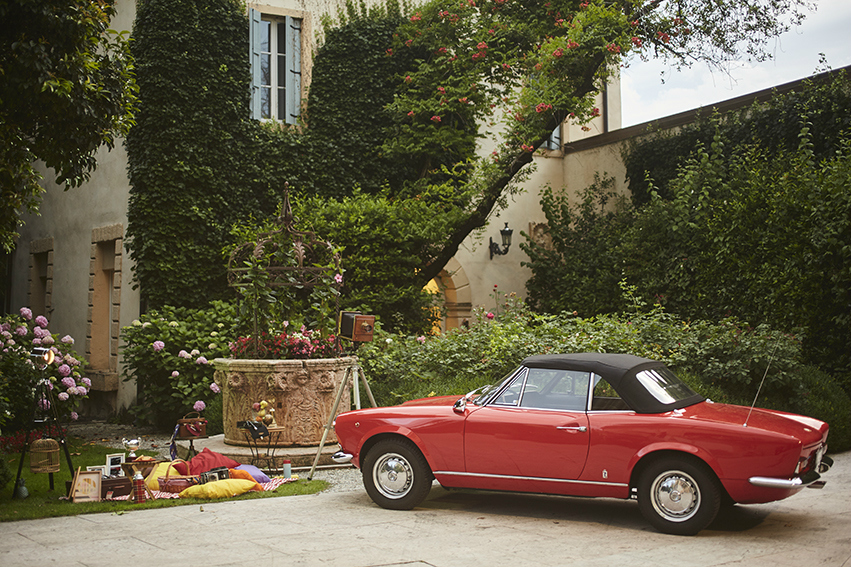 “The Turin Motor Show under the sign of optimism” was the positive-sounding title of the 48th edition of the event held in the halls of Torino Esposizioni in 1966. The motor show welcomed visitors with a magnificent display of lights and colours. The glossy paintwork of the cars reflected the bright neon lights multiplying the effect. It was the 1960s and waves of enthusiasm were rolling across Italy.

The Fiat stand stood out for its sheer size in the exhibition hall, with a comprehensive lineup displayed at the 1966 Turin Motor Show and capable of satisfying the most diverse tastes and needs. There were three Fiat debutantes, one of which was the 124 Spider, which stood on that Fiat stand accompanied by two beauty pageant winners and actress Marisa Solinas

This model was the pinnacle of the evolution in the thrilling yet accessible convertible car segment that Fiat had led since the end of World War II with models such as the 1100 Spider in 1954, the 1200 and the twin-shaft 1500 Bialbero in 1958, the 1500 S and the 1600 S in 1961. The 124 Sport Spider was designed for drivers seeking brilliant performance at an affordable price.

Despite being an evolution of the 124 saloon, the 124 Spider was a genuine sports car with which everyone soon fell in love. To design the newcomer, Fiat called Pininfarina, long-time partner of the automaker and a respected name in automotive car design worldwide.

The model picked up most of the mechanicals of the Fiat 124 saloon, but was designed from the start with some quintessentially sporty features. The name of Pininfarina was in itself a guarantee of design and interior elegance, and as a whole, the convertible stood out with the overall high quality of its finish, its accessories and its colours.

With the same rear-wheel-drive, the Spider version was strongly connoted by the 124AC.000 engine. It was a straight-4 with a displacement of 1438cc, dual overhead camshafts and valves arranged in a V. It developed a power of 90bhp at 6500rpm and reached a top speed of 170km/h. It had a double-barrel vertical carburettor, while a double oil filtering system to ensure better lubrication and longer life.

Other features that placed the model in the premium sports car segment include a 5-speed gearbox as standard equipment, radial tyres and sporty two-spoke steering wheel. The latter was connected to the steering box with a two-part steering column joined by CV joints for excellent handling.

The model’s elegant style, good engine performance, stability and safety (derived from the four disc brakes with vacuum brake booster and the presence of a Panhard track bar for better load arrangement on bends) secured success in terms of sales and image from the first months.

Read about the modern-day Fiat 124 Spider based on the Mazda MX-5.

Read about the 20-year-old Alfa Romeo Spider once owned by a Torque writer.