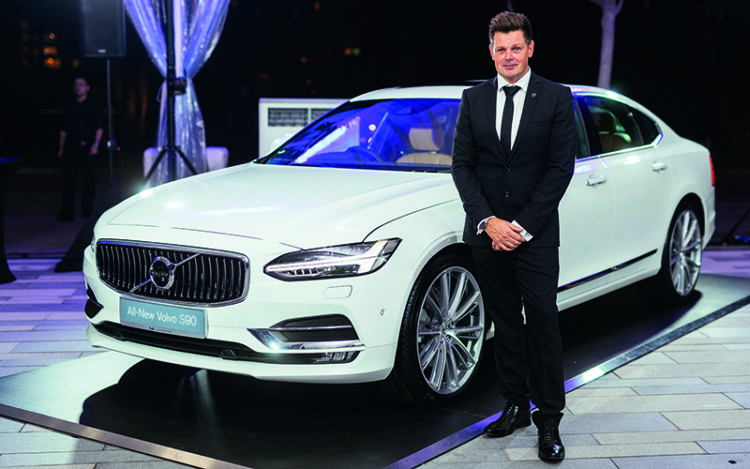 If you spent at least 10 minutes talking to Jonathan Disley, you might begin to think that future Volvo models are going to have retro designs, and will be bereft of any advanced features.

This is because the 46-year-old Briton is very much a fan of classic cars, and has owned models such as the Porsche 356 and 912.

Although his heart may be in the past, his mind is firmly in the modern age. In fact, since most of his work experience revolves around concepts, you could also say that his eyes are on the future.

Jonathan started his automobile design career in 1995 with Audi, where he penned the exterior of the A4 Cabriolet. His first stint with Volvo came four years later, where he worked  on several concept exteriors  and interiors.

In 2002, Jonathan did the interior concepts for Volvo’s S80, V70 and XC70 models. Three years later, he was the chief designer for the XC60 SUV. He then moved on to design the S60 saloon and V60 estate.

From 2011 to 2015, Jonathan was responsible for a raft of Volvo concept cars, which included the You, Estate and Coupe.

Jonathan sits down with Torque to discuss the new S90, and shares his thoughts about autonomous cars.

Have you always  wanted to design cars?
Yes. When I was a kid, I drew a Formula One car. I didn’t know you could work as a car designer until I was 13 or 14, and discovered that there were design studios and schools.

You studied product design. Were there consumer products that you also wanted to design, apart from cars?
When I was studying, I designed submersibles. I enjoy solving problems from a technical standpoint.
One of the consumer products I designed was an electric razor shaped like a frog. The idea for that came from a silly question: Who wants to kiss a frog? Of course, the shaver itself didn’t resemble a frog!

When you open the door, you feel its handle and its weight. How a steering wheel feels like in your hands – all these factors influence buying decisions.

An interior has around 1500 components, which must all work together. And pass crash tests. In a way, every automobile part is like an individual product.

Are there fewer restrictions?
Yes, but you’ve got to bring every component together and make them fit. And there’s a fixed amount of time before the car’s launch. Failure is not an option.

The S90’s design is inspired by luxury cars of the past and Volvo’s own P1800 coupe. But what exactly was the design brief?
We had to create an elegant and luxurious large sedan. We had to make it impossible for you to not react to this car. We needed to make a statement. We love current Volvo owners, but we want to attract more people.

Was there anything you wanted to add to the S90 but couldn’t?
No, I don’t think so. Right from the beginning, we had a concept that we wanted to turn into an actual production model. I think we’ve succeeded.

You talked about the Coupe concept. Is that something we can look forward to?
[Laughs] I’ve got a good poker face. I really can’t say. We’re going to make some great products. Let’s wait and see.

Do you sketch even when you’re on the go?
Yeah, all the time! Napkin sketches are probably the best sketches. The best sketches usually come out when you’re travelling, because you’re switched off from the day-to-day business. The S90’s air-con vents were first sketched on the back of napkins.

If you could design  something that isn’t in Volvos today, what would it be?
Everything that I want in the S90 is already inside it. I think designing the cars of the future will be difficult, especially autonomous vehicles. How will they look like? What will the seating positions be?

How do you feel about autonomous cars?
Well, they’re going to be safer. Planes are flown via autopilot and we don’t question that. But we do question autonomous cars. But I think people will eventually accept them.

I have a Morgan 3 Wheeler. I love driving that thing because it’s such an experience. It’s very quick and very light. You start the motor and your mind goes back to the 1920s.

So I love driving, but I want to be safe. I don’t know how autonomous cars are going to feel, but it’s going to be something that’s better for traffic and safety. But you still have to have that passion – that feeling of wanting to get into a car.