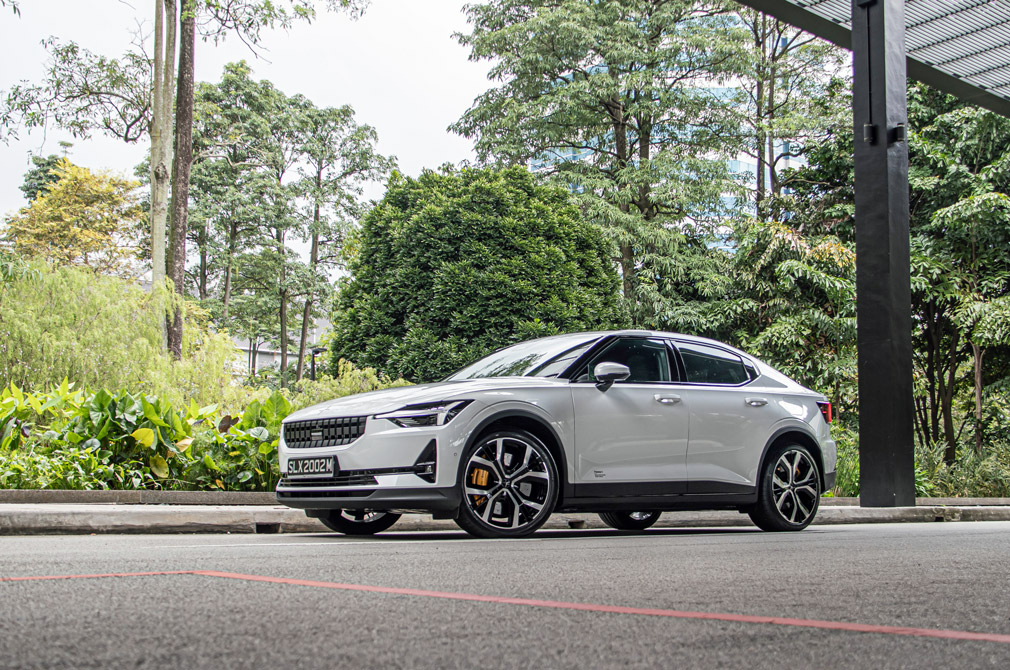 The Polestar 2 is an electric fastback that puts a smile on the driver’s face. But the brand’s ethos and execution are in disagreement.

Have you ever dined at a restaurant whose cuisine was not reflected in the dish you ordered?

For instance, if the establishment specialised in Szechuan, one would anticipate fiery mala flavours that took turns soothing (okay, numbing) and burning your mouth. However, if the dish only had a hint of mala, you’d feel something was off.

But is it really so bad, especially if the dish is delicious and you wouldn’t mind another round? That is the analogy that comes to mind after driving the Polestar 2, the Volvo-owned brand’s first BEV (battery electric vehicle). 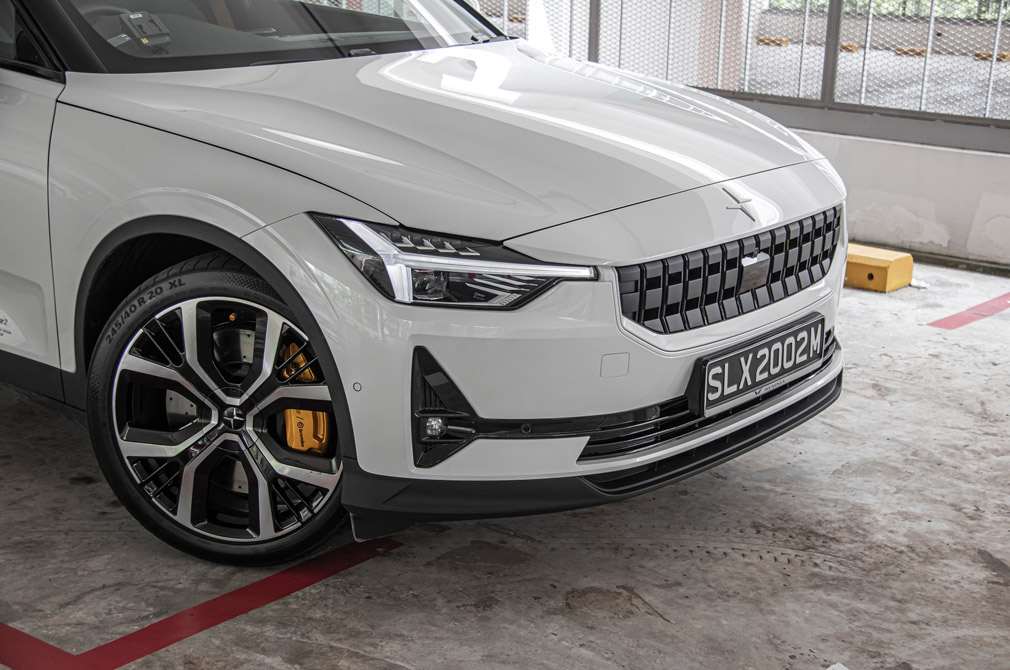 Polestar distinguishes itself from Volvo in three ways. It only offers electric cars (in Singapore), and caters to enthusiasts with its sporty design and focus on performance.

The latter trait will literally be on display if you opt for the Polestar 2 with the Performance Pack, as seen in this test unit. When specified, you get forged 20-inch wheels with sticky Continental SportContact 6 tyres, beefier Brembo brakes and adjustable Öhlins dampers.

Oh, and the brake callipers, tyre valve caps and seatbelts will come in “Öhlins gold”, to help the Polestar 2 really stand out.

Not that the car needs any help in the style department. The handsome fastback may have DRLs identical to Volvo models, but it has fancy pixel LED headlights that automatically adjust to avoid blinding oncoming drivers. 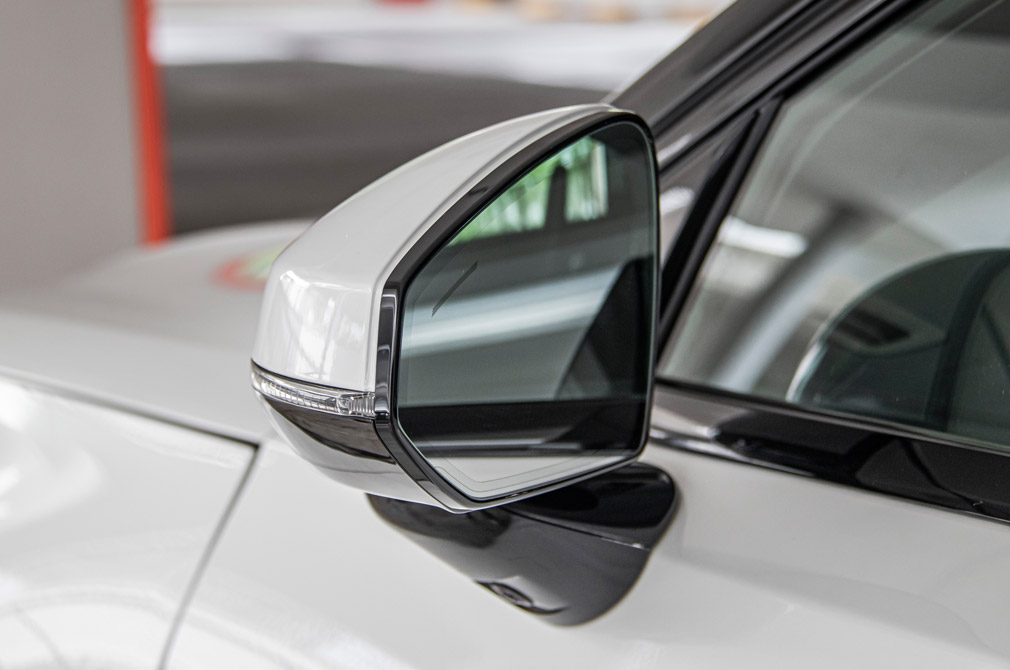 Frameless wing mirrors look fantastic and somehow seem to work even better than the usual numbers. This is how wing mirrors should look like.

The rear end is the most striking part of the car. Its U-shaped light signature defines it, while also linking the tail-light clusters. The only badge is a subtle Polestar logo. It is so attractive that I noticed a woman driver behind me snapping photos while we were stopped in traffic.

The Polestar 2’s interior is just as impressive. The cabin has an upmarket feel and uses plenty of sustainable/recycled materials. Of course, you can still tick the Nappa leather option if you want a more luxe vibe.

As expected, the cockpit has a minimalist theme. There are very few buttons, as most of the usual functions such the climate controls are parked in the full-Android infotainment system. 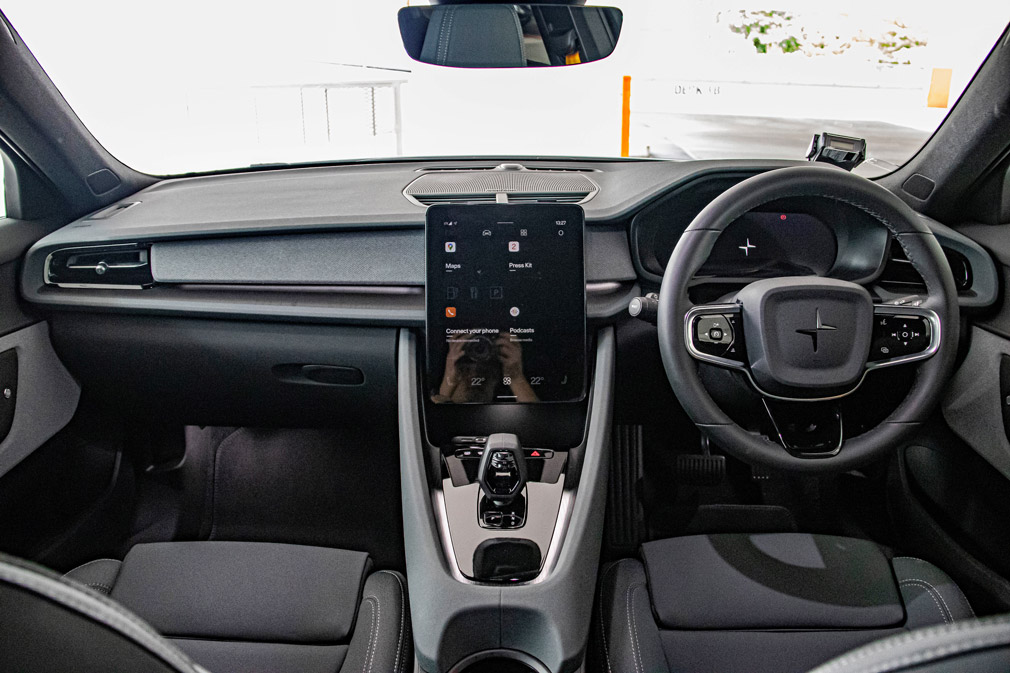 This system looks nicer and more importantly, is a lot more intuitive than the Android-powered one in the Volvo XC60 B6. The latter feels oversimplified, and lacks features such as mirror dimming settings.

The home screen is where you can swap user IDs and log into your Spotify account. There’s even a browser for your passenger to use, though Polestar says that videos on webpages will not be played.

The Assist menu lets you tweak the assistance systems, while the Drive menu enables you to set steering weight, regeneration levels (OnePedalDrive) and the Creep mode.

I like how one pedal driving and creep modes aren’t mutually exclusive – you can have one and the other. The latter is needed when parking – you wouldn’t want the car coming to a full stop each time you release the accelerator.

In fact, this emphasis on minimal buttons also means there is no On/Off switch for the car. Instead, the driver is the key – once the weight on the driver’s seat crosses a threshold, sensors indicate that the driver is present and the car can be driven. Just depress the brake pedal, shift into D and the systems all come to life as you accelerate (or reverse) away. 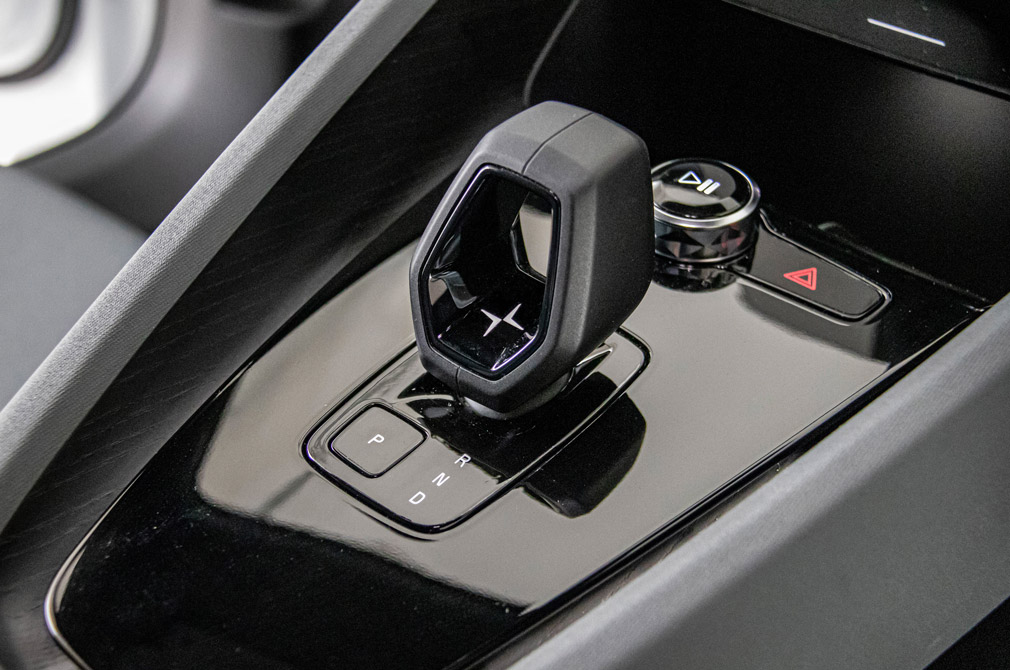 Zipping away is something you’ll be eager to do in the Polestar 2 Long range Dual motor.

Now, here’s where the disconnect hits you. For a car that’s supposedly performance-oriented, the even snappier response you expect from the drivetrain is absent.

If you want to feel the rush, you’ll have to dig deep. And by dig, I mean stab the accelerator pedal with some degree of impatience (or anger). 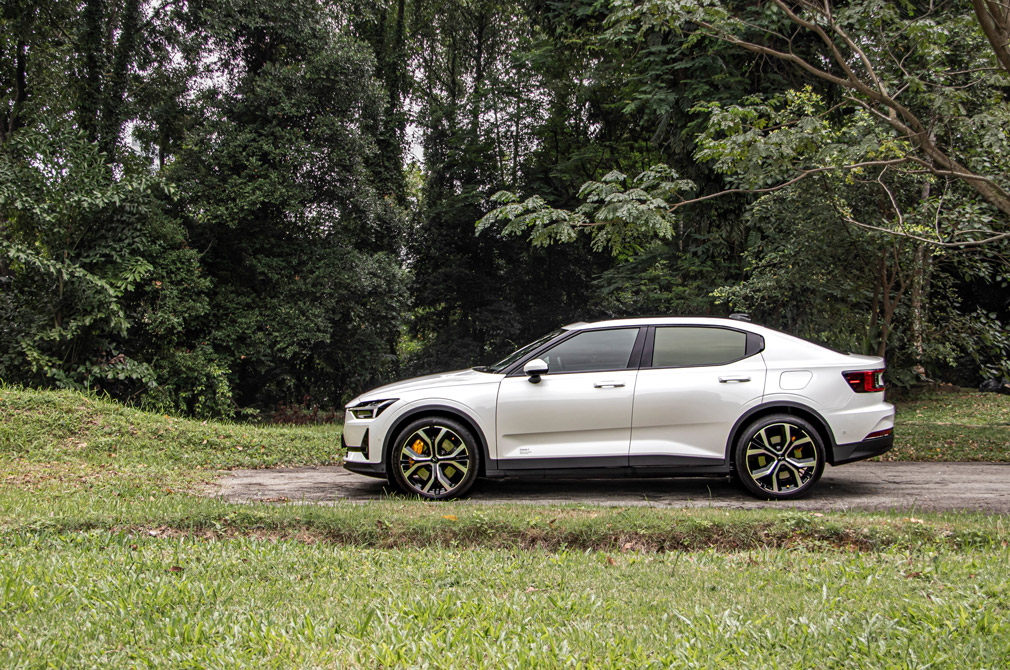 Coyly, the Polestar 2 does not want to give up its ponies that easily. Power delivery is linear and predictable, which is nice. But this is supposed to be a high-performance machine. When I feel the urgency, I want it to respond in kind.

It does not help that the Polestar 2 does not offer any driving modes. With the right software tweaks, having a more responsive Sport setting could easily make this a keener drive.

That said, in spite of its slightly taller ride height, the Polestar 2 delivers nice handling. The car’s nose feels eager as you point it into a corner, and the chassis understands your intentions.

Even if you’re cynical enough to dismiss this fastback is as a mere “sportier Volvo”, it won’t change the fact that it can put a smile on your face. In fact, despite being all-wheel-drive, it has rear-biased handling that reminds me of a smaller BMW 3 Series. Well done.

The steering, though not much for feedback, is precise and remains true to your intentions, helping you place the car as you see fit. 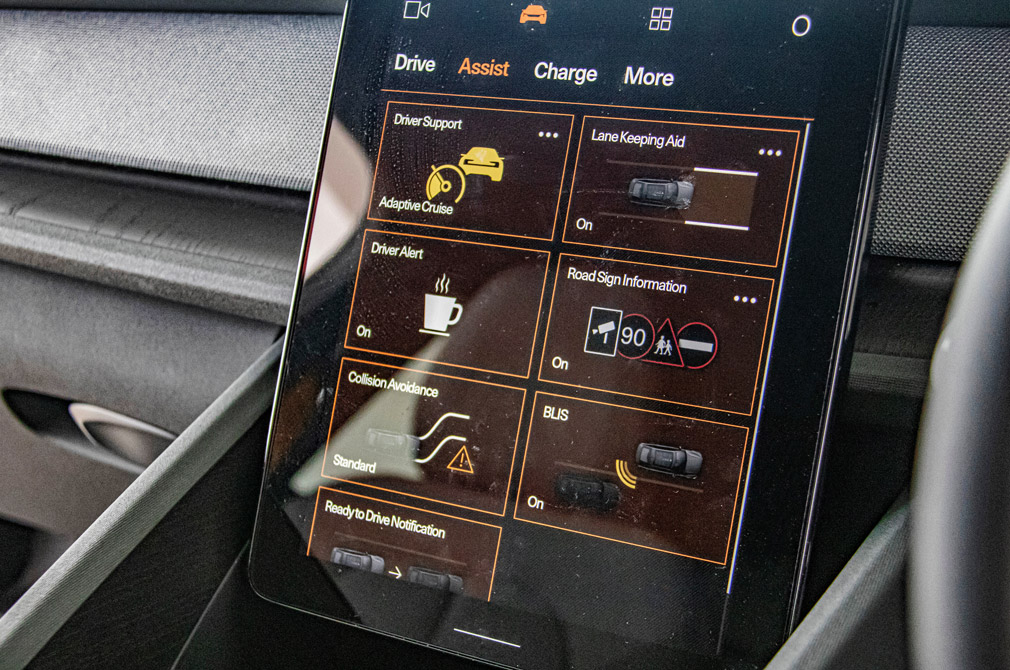 The adjustable Öhlins dampers will presumably cater to those who wish to track this car. But you should refrain from ticking this option unless you are blessed with pothole- and speed bump-free roads, which is unfortunately not the case in Singapore.

Even when adjusted to their most compliant setting, the dampers “thump” each time you drive over pockmarked tarmac. And while you might be fine with it, I assure you that your backseat passengers will not.

The Polestar 2 does so many things right on so many levels.

Even without the auto/lock unlock function, the seamless “get in and go” feature is cool. The infotainment and menus are intuitive and properly presented. Would “analogue” digital dials be nice? Yes, but they aren’t an absolute necessity.

As for its dynamics, the handling is pleasurable and there’s definitely more than enough power on tap.

The only thing that bugs me is the disconnect between Polestar’s positioning and its execution. For all the talk about sportiness and performance, the Polestar 2 Long range Dual motor does not feel fast or urgent.

Polestar should have just said that the Polestar 2 was a handsome fastback with an intuitive cockpit and great handling. It could have used taglines such as “Only for sexy drivers.” Or it could even go further and say: “Not for Volvo buyers.”

That would have hit the nail on the head, because that’s exactly what this car should be appreciated for. 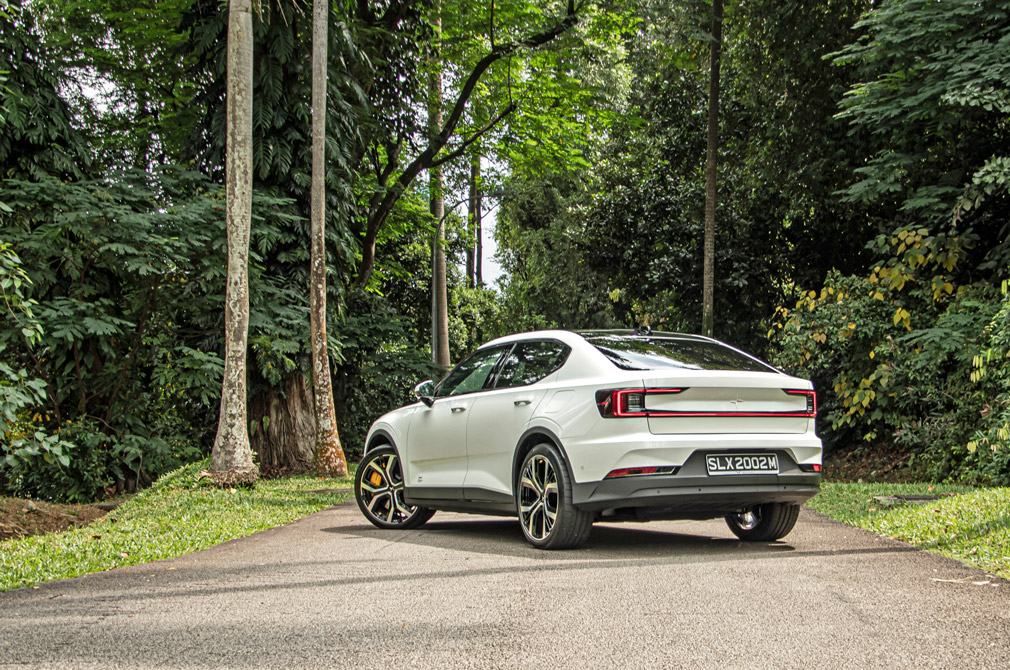