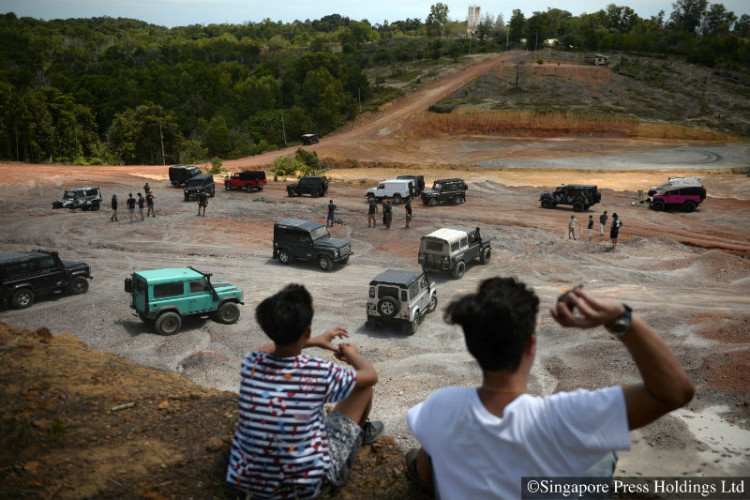 The plan for the day was simple.

Seventeen Land Rover Defender owners would head to the Malaysian beach town of Desaru, where a group of experienced owners had organised an overnight basic training camp for newer car owners.

The latter group would get to manoeuvre their vehicles over tricky terrain and learn to exploit their full potential.

Defender owners organise such events occasionally, so I joined the group for a weekend last month.

We reached the training area at about 10am, four hours after leaving Singapore. We ventured to three venues, with the terrain ranging from sandy to rocky, which made it perfect to put the Defenders through their paces.

As the sun set and we returned to the beach, we traded car seats for hammocks and camping chairs, gathering round a fire for a barbecue dinner. The enthusiasts, part of an estimated 400 Land Rover owners in Singapore, are part of a global die-hard Defender fan club. The local group started meeting in 2001 through mailing lists and later via social media.

Some just like the vehicle’s looks, while most are drawn to its ability to tackle tough terrain.

“It’s a vehicle which can take you everywhere,” said Mr Benson Tan, a self-employed 47-year-old who has owned a Defender for 13 years.

He takes the family camping with it. “No other vehicle that I have ever owned has brought me so much joy. The kids love it, the wife thinks it’s cool and there are endless uses for it.”

Singapore’s relationship with Land Rover is also special, not least because of its adoption by the Singapore Police Force and the Singapore Armed Forces.

In 1955, six British university students packed themselves into two Land Rover Series I Station Wagons – predecessors of the Defender –  and drove overland from London to Singapore. It was a nearly 30,000km drive that took them half a year. That expedition was the longest overland journey undertaken at that time.

Now, the Defender’s journey has ended after nearly seven decades.

Despite speculation that a replacement is in the works, the last Defender rolled off the production line in its Solihull factory in January due to tighter emission and safety laws in Britain.