Putting the ramp together needed teamwork and the correct tools.

All 200 participants were effusive in their praise of the quick leap in the little Colt Version R at Mitsubishi Extreme Drive (MED) 2009. Here is the toil behind the joy.

Initially weighing 1.5 tonnes, the ramps eventually tipped the scales at 2.5 tonnes following a redesign. Load tests necessitated this engineering change, which specified thicker steel beams and industrial plywood upgraded from regular grade to marine grade, which is stronger and also more resistant to wet weather. The structure was sturdy enough to support two Evo X GSRs dropped onto it simultaneously – in theory, of course.

To lighten the logistics, the heavy ramps were broken into six modular segments to be assembled on site. A 40-foot low-loader trailer, accompanied by a crane-equipped lorry, transported the ensemble to Changi Exhibition Centre in the middle of the night. The event organisers started setting up the MED masterstroke first thing in the morning (the day before the event).

Like combat engineers in civvies, the workers pieced together the components of the ramp jump with help from their company van, which did some nip and tug. Each of the ascending and descending sections was seven metres in length, set at a precise 35-degree angle and placed exactly 2.8 metres apart.

This arrangement was meant for an approach speed of 40km/h. Too slow and the Colt won’t clear the two ramps, landing on the centre safety deck instead. Too fast and the Colt will overshoot the runway.

Either mistake may prove costly, but with expert on-board guidance from Kevin Flynn and Danny Murphy of Australia’s Driver Dynamics (one of the best advanced driving schools Down Under), everything went smoothly over the MED weekend.

More than a thousand ramp jumps were done, including 50-odd test vaults by the Australian instructors. At two seconds per flight and close to three metres airborne each time, the four-wheeled “jumpmasters” notched up a total flight time of over 33 minutes and a flight distance
of three kilometres. Low mileage, in other words, on the two Colt Version Rs which were subsequently put on sale at a discount.

As for the ramps, they were dismantled and transported to a warehouse somewhere in Singapore, on standby to jump into action again.

(Click here to read about a modified Lancer Evolution X.) 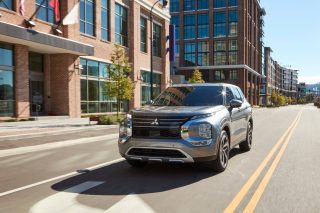