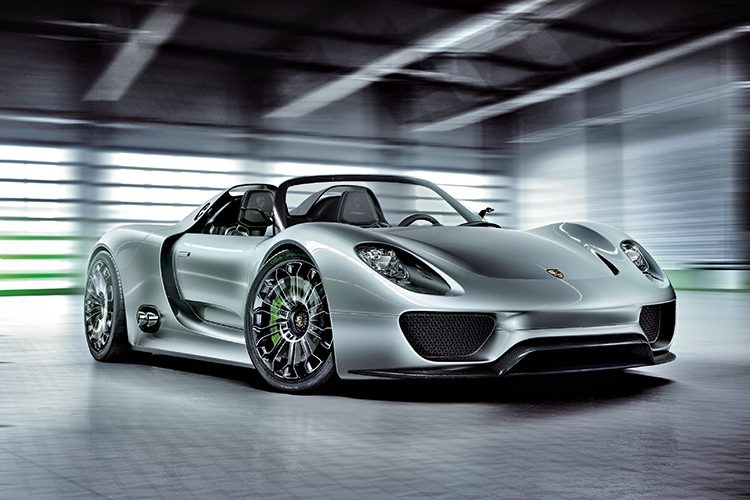 As if to dispel speculation that the Porsche 918 Spyder was merely a clay model in the Geneva Motor Show, Porsche organised an elaborate show-and-tell session at the Pebble Beach Concours de’Elegance in June.

Proceedings kicked off with a dinner in an empty hangar at a private airfield, where Porsche’s head of design Michael Mauer took pains to describe his brainchild, parked alongside the racing version of the 911 GT3 R Hybrid. The latter had very nearly won the 24 Hours Nurburgring race the month before.

Trust Porsche to turn negative press into a PR event for the “green” GT3 R. It dominated the field for 22 of the 24 hours, racking up a huge 20-lap lead before it retired with “engine” failure (not the hybrid part, of course). 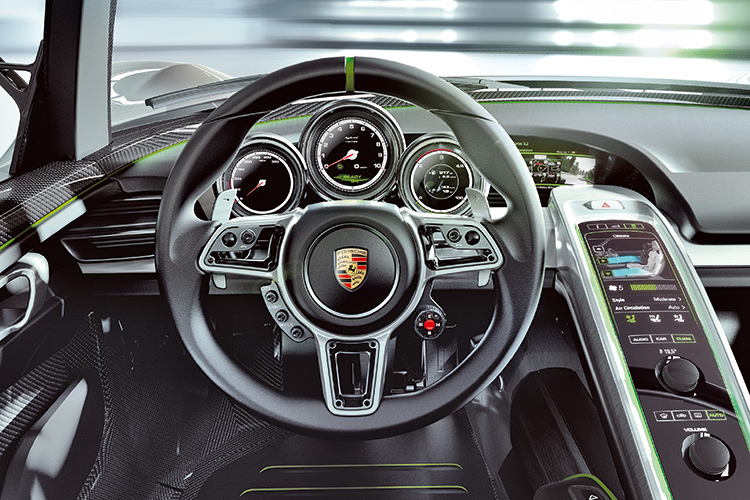 While this radical race car uses the Williams-developed KERS to provide an extra 160bhp for six seconds of power boost, the Porsche 918 Spyder is far more practical. It uses liquid-cooled lithium batteries, instead of the flywheel KERS accumulator of the GT3 R Hybrid, to store the regenerative charge.

We’re herded to a huge private estate next to Pebble Beach the following day for the moving demo of the Porsche 918 Spyder. We walk for little less than a kilometre before spotting the 918 as we clear the last crest. We’re told that Mauer himself will pilot the vehicle down this road, and we immediately scramble to occupy a prime vantage point.

Not long after we each stake our little piece of territory for photography and videography, Michael Mauer starts up the Porsche 918 Spyder with a crackle and burble reminiscent of the RS Spyder. The same 3.4-litre V8 race engine is housed in the only development 918 Porsche has made so far. 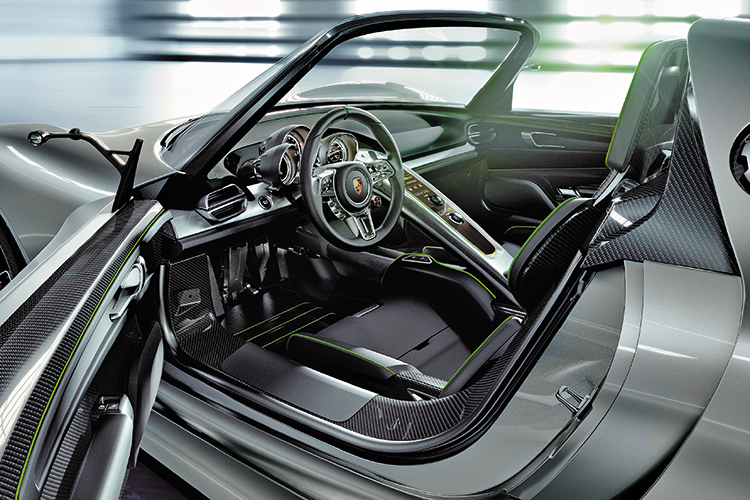 While the full race version has a wild 503bhp, the road-going Porsche 918 Spyder has a far more driveable state of tune assisted by the hybrid drive, which is rated at 218bhp.

This electric-petrol all-wheel drive system realises the performance of the Porsche 918 Spyder on various levels. The “greenest” of the driving modes, the E-mode, is all-electric and runs the car on its battery for 25 kilometres.

A plug-in hybrid, the Porsche 918 Spyder is meant to be charged overnight by household current. At the Pebble Beach demonstration, the 918 Spyder did a couple of passes before needing a charge from an external power source. 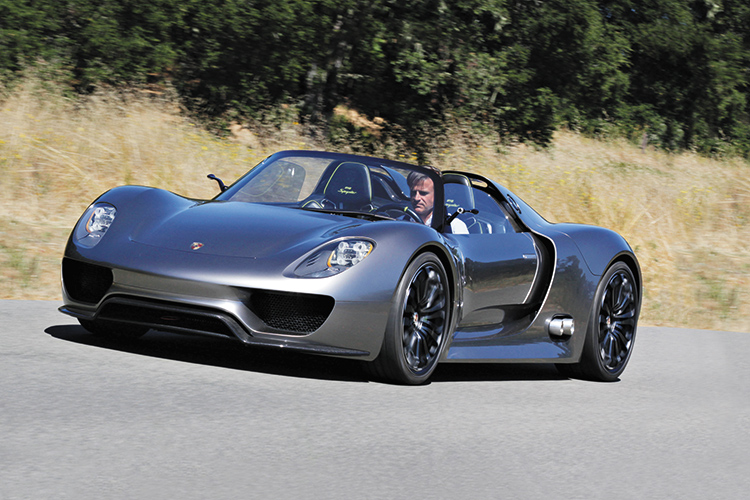 The engineers quickly point out that while the hardware is real and installed in the Porsche 918 Spyder, it presently functions as a propulsion unit and is not integrated with the full hybrid capability to recharge the batteries on the go.

When fully functioning, the Normal drive mode is like any current hybrid’s today, assisting during acceleration and regenerating during braking.

The Sport mode focuses on performance, with most of the output going to the rear wheels, complete with torque vectoring to improve driving dynamics. 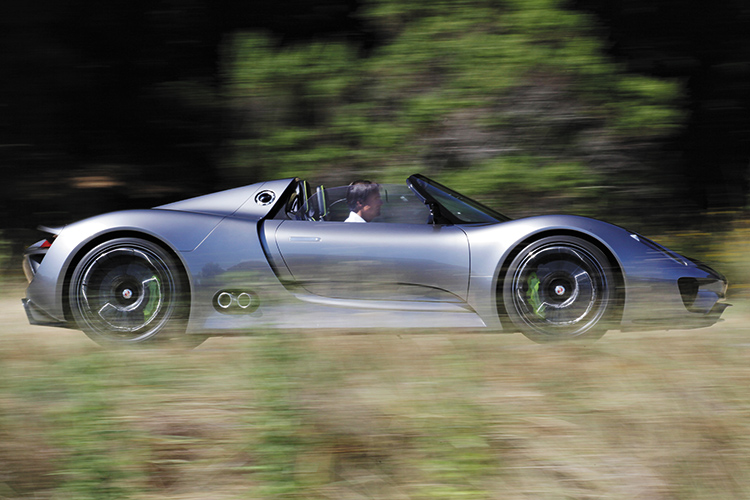 Finally, there is the Race mode, where the energy reserves not only help during acceleration, but also deploy stored battery power (with a GT3 R Hybrid-style “push to pass” button) for a brief duration to overtake slower cars at critical moments.

With this combined power, the Porsche 918 Spyder is claimed to accelerate to 100km/h in just 3.2 seconds. Its top speed of 320km/h also makes the roadster the absolute fastest hybrid around.

The Porsche 918 Spyder’s hybrid drive consists of two individual electric motors – one driving the front axle with a fixed ratio, and the other delivering drive through the rear axle via the PDK gearbox. 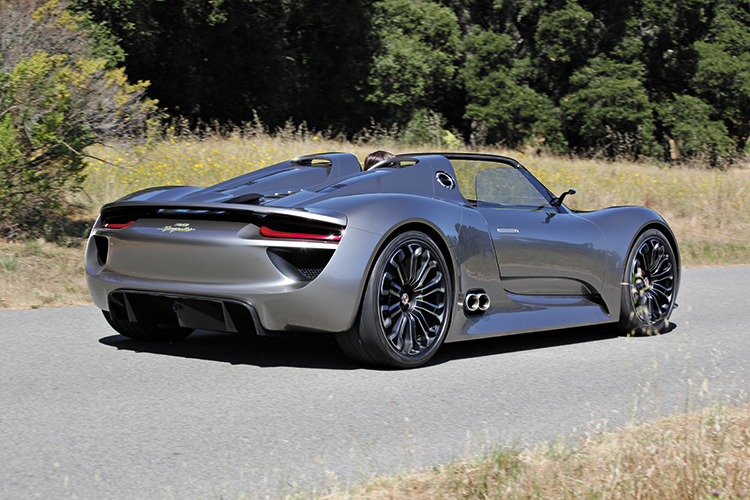 The seemingly simple front system actually does the lion’s share of the energy regeneration during braking, and it is part of an active stability system controlling the 918’s handling.

The Porsche 918 Spyder is an enigma of sorts. It is capable of extremely low CO2 emissions and fuel consumption – respectively 70g of CO2 per kilometre and over 33 kilometres per litre. 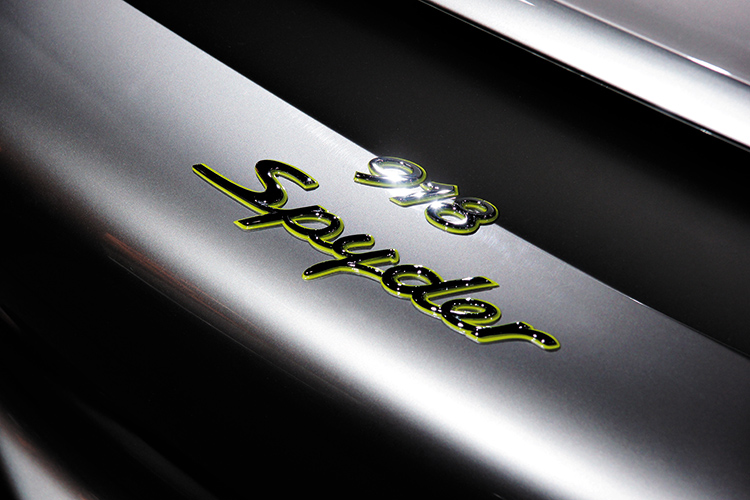 Alternatively, it can be a formidable race machine capable of completing the Nurburgring Nordschleife in less than seven and a half minutes, which is even faster than the Carrera GT. Prepare for a price way in excess of the Carerra GT, though.

Speaking of the Porsche collectible, the Porsche 918 Spyder’s build quality is equally exotic, with carbon-fibre reinforced resin, magnesium elements and aluminium parts to keep weight below the target of 1490kg and yield high torsional stiffness.