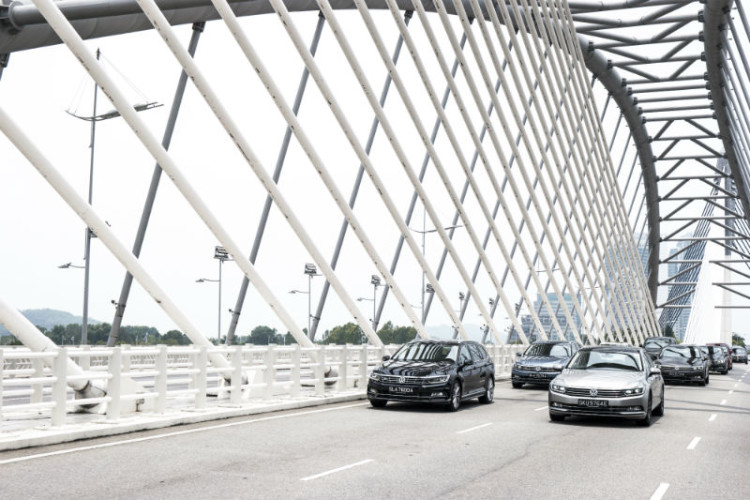 It was a two-day media drive to Kuala Lumpur (KL), organised by Volkswagen to promote their latest Passat range.

Half a dozen Passats, from the standard-spec 1.8-litre saloon to the generous-spec 2-litre Variant wagon, were made available for the classic Singapore-KL road trip.

Being a weekday, we were spared the traffic jams on both sides of the Causeway. Our convoy of Passats made the crossing without a hitch.

Together with my co-driver, I was initially assigned the Passat Variant R-Line. Being half-awake at the crack of dawn, I opted to occupy the passenger seat and poke around the cockpit.

Immediately noticeable was the interior’s premium feel. From the high-grade materials and Nappa leather seats to the streamlined dashboard with brushed aluminum inlays, it all spelt quality.

Only the eagle-eyed would notice the hard plastics in the lower reaches. I also found the Dynaudio sound system rather underwhelming, at least in radio mode.

New, too, was the 8-inch Discover Pro navigation-infotainment system. It had loads of touchscreen features to keep the tech-savvy happy, albeit only after some initiation. You can even pair your smartphone apps via a USB link – for example, iPhone users can hook it up to activate Siri. Cool. 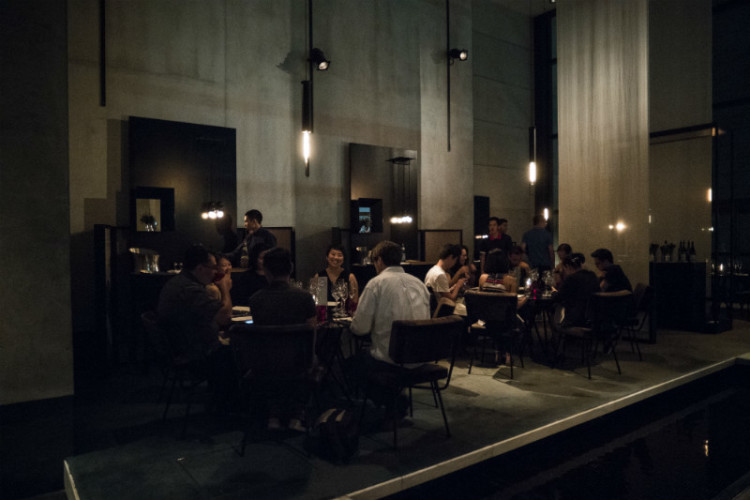 Also noteworthy was the glovebox equipped with a blower to store heat-sensitive items or keep drinks cool.

The cabin was spacious, and made even airier with a panoramic sunroof as standard.

Increased body rigidity and better insulation made the Passat Variant a refined and comfortable ride, even on 19-inch low-profile tyres, with help from the Comfort setting of the five-mode DCC (Dynamic Chassis Control).

Instead of the typical “R&R” journey-breaks along the North-South Highway, our convoy pit-stopped for an authentic Malaysian kopi tiam breakfast at Kluang Rail Coffee.

This established township eatery is popular with locals and transit visitors alike for its affordable good food.

Behind the wheel for the onward drive towards KL, it became apparent that the Passat Variant was a high-speed cruiser, and a quiet one at that.

If the stress-free driving were to lull one to doze off, fret not. The wagon was equipped with a fatigue detection system, and even an ergoComfort back-massage driver’s seat.

Furthermore, the seat whirred forward/backward automatically, at journey’s start or end, for easy entry and exit – a welcome convenience for the less dexterous.

On less demanding highway stretches, I started tinkering with the 12.3-inch Active Info Display through the steering-mounted controls. 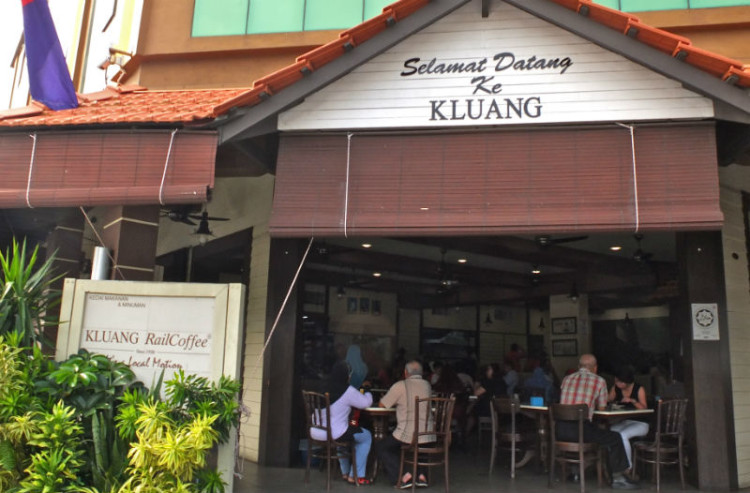 This fancy digital display, similar to that in the newest Audis, can transpose the navigation map between analogue-style speedo and tacho readouts, together with a host of other driving data.

We had police outriders whilst negotiating the notorious traffic conditions of KL. It was raining, too. This made it all the more dramatic when we sailed through the sea of cars after the police escorts parted the traffic for our motorcade. Now I know how VIPs travel in gridlock.

Northbound and out of town, we were back to our tight formation as we ascended towards Genting Highlands for our lunch stop at Restoran Chuan Kie (located in Gohtong Jaya just before the mountain peak), another popular local eatery.

With Sport mode selected for the sprint up the mountainside, the Passat Variant was transformed, displaying hot-hatch verve and fluid cornering manners – which was all the more surprising because of the large wagon proportions. Incidentally, the Passat Variant is even more capacious than the already roomy A6 Avant.

After lunch, the drive down from Genting was equally entertaining. Paddle-shifters enabled manual override of the gears on the twisty bends, for even better control, while an on-board altimeter kept track of the descent progress. In all, the Passat Variant made short work of the downward run.

We stayed the night at The Majestic Hotel along Jalan Sultan Hishamuddin. The restored, regal hotel is away from the main KL tourist belt, but the well-appointed rooms, each complete with en-suite bathroom and freestanding tub, made for a welcome respite after the long drive.

The evening was capped off with a sky-dining experience at Cantaloupe on the 23rd floor of The Troika. 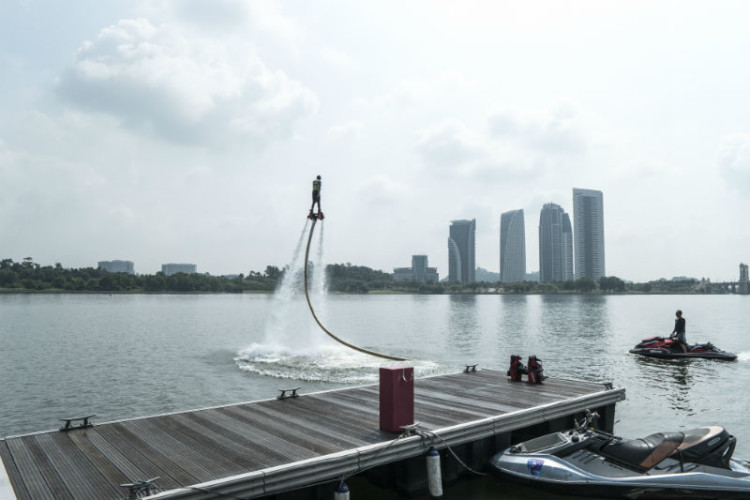 Foodies, take note: The fusion cuisine is by chef Christian Bauer, from the CNA television series Cooking for the Crown. It was a treat – for the palate and for the eyes as well, thanks to the breathtaking cityscape views of Malaysia’s capital.

After checkout the following morning, I swapped to a 1.8-litre Passat saloon for the remainder of the road trip.

This model lacked some of the luxury equipment in the Passat Variant R-Line, but was no less comfy, refined and well-built. In fact, I’d say it rode a tad more comfortably on its 17-inch wheels than the sportier wagon.

Like our grand entrance to KL, our entourage was again given the VIP treatment, with police outriders to clear our path out of the city.

Next stop, Putrajaya. The seat of the country’s federal government administration is also home to Flyboard Malaysia.

On the 650-hectare Putrajaya Lake, the more adventurous amongst us tried the latest watersport, flyboarding. Strapped to a board, one got propelled into the air by water hosed-in from a jet ski. For the less adventurous, there was also stand-up paddleboarding.

After the watersport workout, we proceeded to our lunch stop at Aunty Aini’s Garden Café, tucked away in Nilai.

The eponymous owner is a local doyen of sorts – chatty and feisty, she cooks up Malaysian home-style food with a fiery passion. Once, she even commandeered Gordon Ramsay in her kitchen, on an episode of Gordon’s Great Escape. 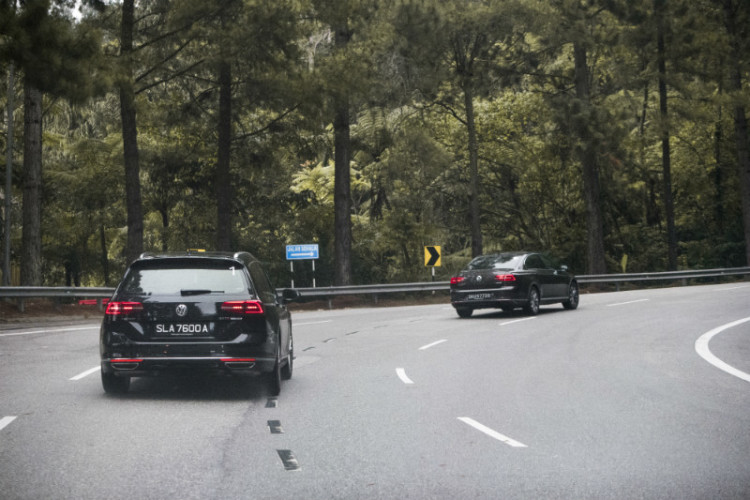 Tummies satisfied, the participants picked up the pace for the final highway dash back to home sweet Singapore.

The more powerful 2-litre Passat Variant constantly pulled ahead whenever the highway cleared, but the 1.8-litre Passat saloon was no laggard either.

I just blipped the throttle and the 7-speed DSG dropped two gears without hesitation, closing the gap. Even as a 1.8-litre model, the Passat was a consummate long-distance cruiser. It was also marginally more frugal (by half a litre per 100km) than the more powerful 2-litre Passat Variant, which returned 8.5 litres per 100km.

This “eat, drive, play” driveaway was as much a gastronomical and lifestyle event as it was an opportunity to really road-test the new VW Passats.