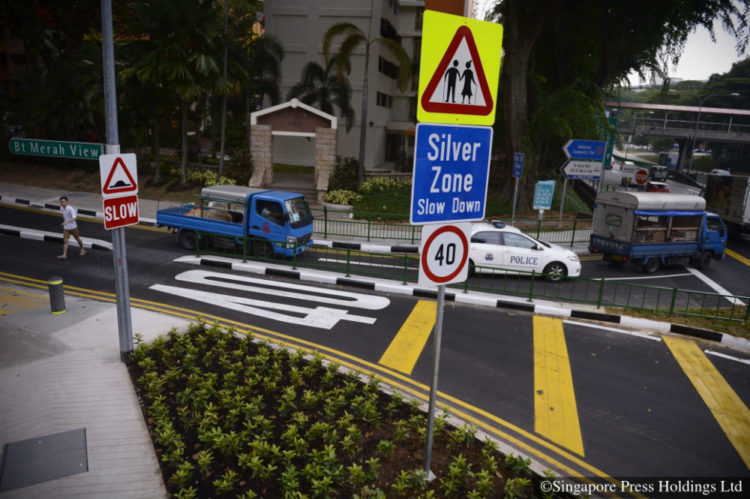 The Silver Zone Gateway at Bukit Merah View, with speed limit signs and rumble stripes informing motorists to slow down and observe a speed limit of 40km/h.

Ten more locations have been identified under the Silver Zone scheme, which uses road safety features for the elderly.

This brings the total to 25 by 2019. The sites for another 25 zones, to be ready by 2023, will be identified later. There are now nine such zones, and six more will be completed by next year.

The Land Transport Authority (LTA) has also won an international award – the Prince Michael International Road Safety Award – for the scheme. It was selected from a pool of more than 60 nominations globally, and received the award from Britain’s Prince Michael of Kent, a cousin of Queen Elizabeth, at an event in London on Tuesday (Dec 13).

Dr Chin Kian Keong, LTA’s group director for transportation and road operations, said: “We are extremely honoured to receive this award in recognition of the Silver Zone programme, and are heartened by the strong support from the local community in Singapore… We will continue building on the positive feedback, and expand our road safety initiatives to benefit more road users.”

Prince Michael of Kent said: “The judges unanimously agreed that this initiative is a thoroughly practical approach to a growing problem of elderly pedestrians, and certainly replicable elsewhere in the world.”

In Silver Zones, speed limits are reduced to 40km/h and motorists are informed through road markings, signs and “rumble” strips, which alert drivers when their wheels go over them.

Two-stage crossings are also built, so pedestrians need to check the traffic from only one direction, and have a safety refuge in the middle of the road. There are “pinch points” at these crossings, with narrower roads to get cars to slow down.

Based on traffic studies conducted, motorists driving within such zones record a decrease of up to 15 per cent in their speed.

In general, areas chosen for the scheme are those with a high population of senior residents, relatively higher accident rates involving seniors, and amenities which seniors frequent, such as wet markets.