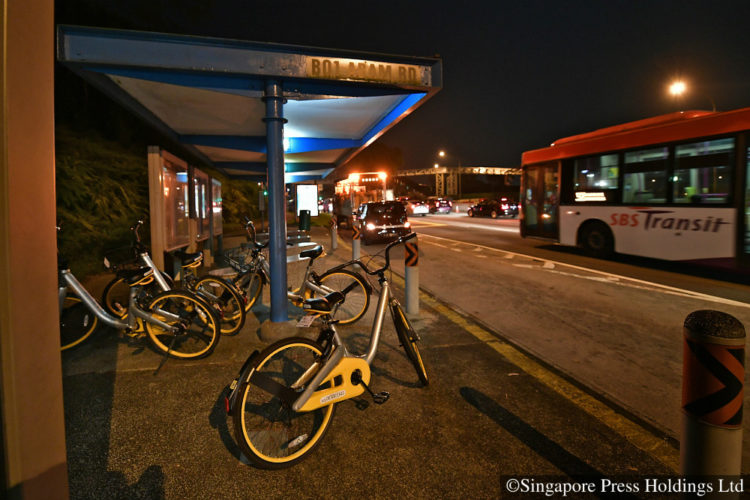 oBike bicycles being parked inconsiderately at a bus stop at Adam Road along Lornie road on 10 April 2017.

The bikes were impounded because they were found to be “parked indiscriminately and not removed within the notice period”, the LTA said on its Facebook page yesterday.

Those bicycles issued notices by the LTA are impounded if they are not removed within half a day. The companies that own them get online notifications.

On top of an impound fee of $140 per bicycle, there is also a fine of $300 for the first offence and $500 for subsequent offences.

Of the impounded two-wheelers, the majority – 212, or about 76 percent – were from Singapore-based oBike, while 65 were from China-based Mobike. Just one was from ofo, another Chinese firm.

Mr Elgin Ee, general manager of oBike, said the company had the biggest fleet and there was an increase in instances of bikes being parked indiscriminately because they are “heavily utilised”.

Its team of 18 maintenance staff, together with its vendors, go around the island daily to redeploy its bicycles, including those with removal notices, he added.

Mr Ee said: “As our team moves round the island to manage such cases, while servicing and maintaining the bikes at the same time, there may be instances when recovery of these bikes is late.”

An ofo spokesman said the firm was “comforted by (its) relatively high success rate” and aims to redeploy its bikes within four hours of receiving a removal notice.

“However, depending on how detailed the notices are – issued with specific landmarks identified and with accompanying photos – it will be challenging for our crew to locate every single errant bike,” she said, adding that the bikes could also have been moved away by other users.

In Parliament last month, Senior Minister of State (Transport and Health) Lam Pin Min said bike- sharing firms will have to moderate the growth of their fleets.

The three major players in Singapore have about 30,000 bikes in total. Dockless shared bicycles made their debut here only this year.