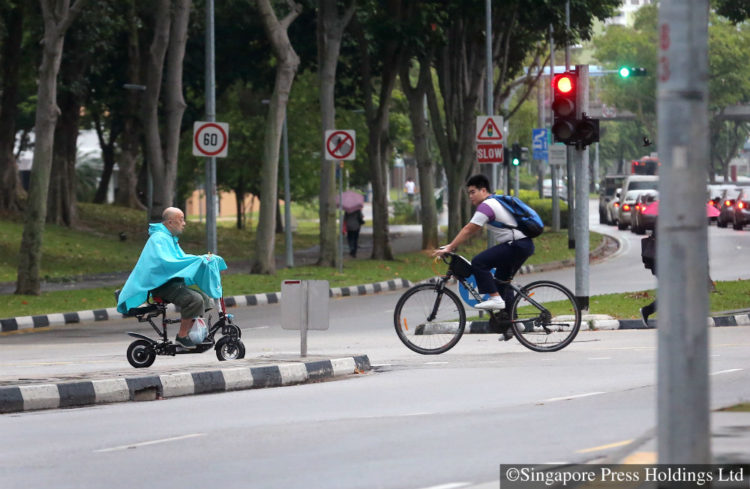 People travelling on either e-bikes or personal mobility devices (PMDs) at Pasir Ris Drive 1 on 21 Sep 2016.

Three men who zipped along a road in Changi on their electric scooters at speeds of more than 100km/h have been arrested for dangerous driving.

They had travelled at speeds of up to 130km/h, Shin Min Daily News said in a report on Thursday. ST understands that they had clocked speeds of more than 100km/h.

Shin Min reported that the trio were friends and were chasing each other when caught by traffic police.

Members of the public had made complaints to the traffic police about racing along that stretch of road, and the police had stepped up their surveillance before catching the three men, Shin Min said.

Investigations against the men are ongoing.

In their response to ST, the police urged all road users “to drive and ride safely and to abide strictly to traffic rules and regulations”.

“Such dangerous and inconsiderate riding behaviour has to be taken seriously as it endangers the rider and other road users,” said the police spokesman. “The police will not hesitate to take firm action against such offenders.”

Transport Minister Khaw Boon Wan said in Parliament on Oct 2 that there were about 90 accidents in the first half of this year that involved e-bikes and personal mobility devices such as e-scooters.

The accidents, which took place mostly on the roads, resulted in four deaths and about 90 injuries.