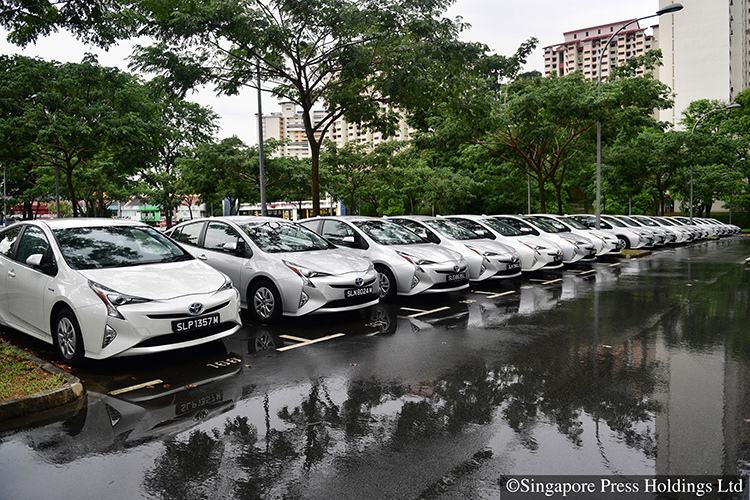 Private-hire Toyota Prius cars lined up in a carpark in Holland Village waiting for hirers.

Is it my imagination or are private-hire cars more prone to accidents?

I often see such cars with body dents, mostly in the rear?

But I rarely see taxis with such damage. Why?

Statistically, a private-hire car is twice as prone to accidents as the average family car.

But a taxi is more than five times as prone.

That is according to data collated by the General Insurance Association, which measures the percentage of accident reports vis-a-vis the population percentage of a vehicle type.

But the data does not take into account the usage pattern of private-hire cars.

A sizeable proportion of these cars may either be unhired, or driven by people who view them as a source of casual income and therefore, do not clock as many kilometres as full-time drivers.

Hence, they may may appear less accident-prone than taxis.

The dents on their bodywork, however, give a different impression.

Taxi operators have an image to uphold because their names are on the cabs for all to see.

Therefore, it is in their interest to fix dents and other damages as soon as possible.

Private-hire cars, on the other hand, do not display the names of the app firms, nor the rental firms the app firms engage.

Grab and Gojek, the two dominant firms here, are not exposed to reputational risk this way.

Private-hire: Top 3 reasons why they may get into accidents

The trend is worrying though.

They also have a shorter mandated lifespan than passenger cars to take into account their far higher usage.

Private-hire cars, however, are treated more or less like passenger cars.