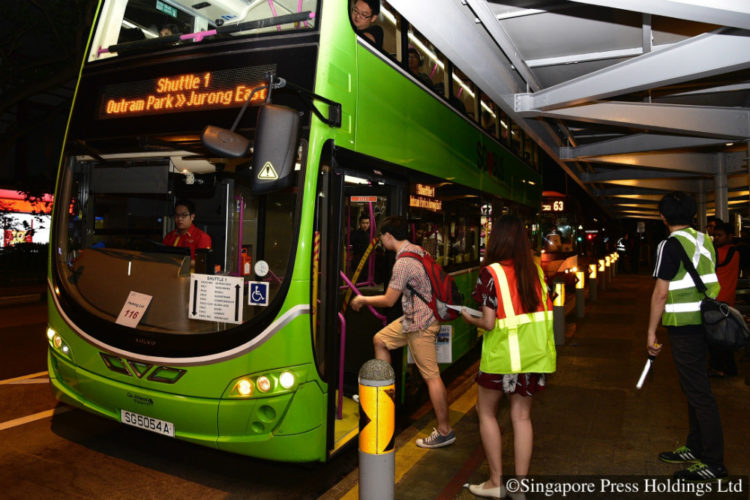 Shuttle buses outside Tiong Bahru MRT station on Dec 8, 2017. About 300 shuttle buses a day will be deployed to ferry commuters on Jan 21 and 28.

On Jan 21 and 28, train services in the east – over an eight-station stretch between Paya Lebar and Pasir Ris, and Expo and Changi Airport stations – will be suspended for the whole day to facilitate rail engineering works.

The shuttle buses will be organised into two services: one plying between Pasir Ris and Aljunied, where train services will be available; and another between Expo and Changi Airport stations.

A waiting area set up near Gate 8 of Terminal 3 will be the bus pick-up and drop-off point at the airport, Chinese-language daily Lianhe Zaobao reported on Wednesday (Dec 27).

Travellers arriving in Singapore can take the bus shuttle to Expo station, where they can take the Downtown Line 3 – which is not affected by the closures – to go into town.

Shuttle buses will run at between three- and five-minute intervals during the peak period, and between five and 10 minutes during the off-peak period.

As travellers may be unfamiliar with the MRT closures, the Land Transport Authority (LTA) said on Wednesday that it will work with Changi Airport to put up signs to guide them.

As the shuttle buses are the same as those used on public bus routes, they will not have luggage compartments, and travellers are advised to place their luggage at the designated wheelchair and pram area of the buses, the LTA added.

Changi Airport Group also said it will be putting up prominent signs within the airport to inform passengers of the MRT station closures and staff will assist the passengers.

In addition to the two full-day closures, the 10 MRT stations on the East-West Line will also have shorter operating hours during the weekends in January.

The stations will close about an hour earlier at 11pm every Friday and Saturday, and start later at 8am instead of 5.30am on Saturdays and Sundays.

LTA’s director for bus regulation, Ms Tan Gek Hua, told Zaobao that during the days with shorter MRT operating hours, about half of the 300 buses will be required each time.

The planned closures will give rail engineers more time to do maintenance and upgrading work, and to test a new signalling system which is targeted to be launched in the middle of next year, instead of end-2018 as originally planned, operator SMRT had said previously.

As part of January’s shorter MRT operating hours, train services on the North-South Line between Orchard and Marina South Pier will also operate on a single track on late Friday and Saturday nights, and early Saturday and Sunday mornings. Trains will thus run at longer intervals of between 10 and 15 minutes during these periods.

This month, 17 stations on the western segment of the East-West Line and two North-South Line stations also had shorter operating hours during the weekends, and full-day closures on two Sundays.