The AC Schnitzer BMW i8 means the boys in blue can go green
Loading posts...
0

Police cars the world over are a reflection of the force which protects the people – efficient and reliable, always ready and never complaining.

In Singapore, examples of the humble family saloon have been pressed into service with the Singapore Police Force, with the Hyundai Avante and Toyota Corolla seen patrolling the streets.

But other nations are going the extra mile, taking supercars designed to cruise the autobahn and transforming them into speedy criminal catchers.

Have a look at the Austrian police’s 911 which Porsche built for them last year. It’s no longer in service, but certainly many a speed-limit breaker has been overtaken by the sentinel from Stuttgart.

Meanwhile, Italy’s carabinieri has been handed a Lamborghini Huracan, modified to transport blood and organs. When not making life-saving deliveries, its heart-stopping acceleration from the 610hp, 5.2 litre V10 will be hard at work chasing down speeding cars.

In Singapore, the boys in blue have not been shortchanged in their pursuit requirements, recently acquiring some of Bavaria’s finest in the form of eight BMW 3 Series M-Sport sedans.

According to the Singapore Police Force, the bright orange and blue-liveried expressway patrol stormers will replace older police interceptors from early 2019, which are believed to be the eight Subaru WRX 2.0 Turbo models bought in 2006.

No less impressive is tuner AC Schnitzer’s BMW i8 police car, designed to police the roads as well as the environment.

The car is part of the TUNE IT! SAFE! initiative of the Association of German Automobile Tuners e.V. (VDAT), supported by the German Federal Ministry of Transport and Digital Infrastructure.

The aim of the initiative is to combat illegal and unsafe tuning with a nationwide campaign.

The German tuner – famous for turning BMWs into rocketships – has worked its magic on the hybrid sportscar, giving it a Day-Glo yellow and blue paint job designed to sear the retinas of even the most hardened criminals. 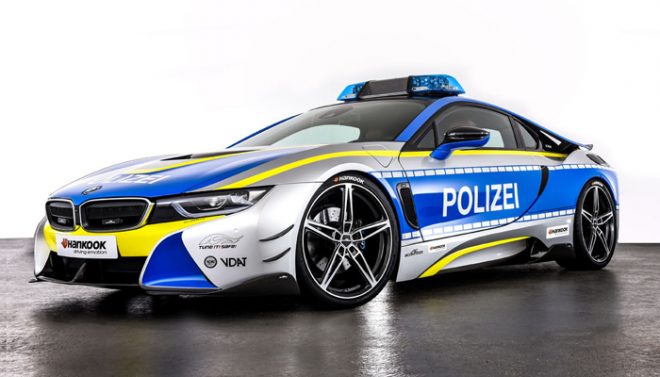 Power comes from BMW’s Twinpower 1.5 litre turbo 3-cylinder engine pushing out 230hp, and an electric motor with 141hp. Combined, the two units propel the AC Schnitzer BMW i8 to 100km/h in just 4.4 seconds, and on to a top speed of 250km/h.

For added downforce, AC Schnitzer has added a carbon fibre aerodynamic bodykit, and a carbon wing at the rear works in tandem with a three-part underbody diffuser to keep the AC Schnitzer BMW i8 pinned to the ground at speed.

A rear wing and diffuser help keep the AC Schnitzer BMW i8 pinned to the road during highway chases.

The car has been lowered by some 20 millimetres at the front and rear, ensuring driving stability in all cornering situations, the tuner said.

The company has also swapped out the staid (by comparison) wheels of the BMW i8 for a set of lightweight AC1 21-inch wheels, saving around 4.4kg per wheel, wrapped in ultra high-performance Hankook Ventus S1 Evo 3 tyres.

Inside, police officers driving the vehicle get AC Schnitzer shift paddles, an aluminium pedal set and an aluminium cover for the iDrive controller.

It’s a quick car, certainly, and for anyone trying to test this Bavarian bruiser and the police driving it, remember this old adage: you can’t outrun a Motorola.