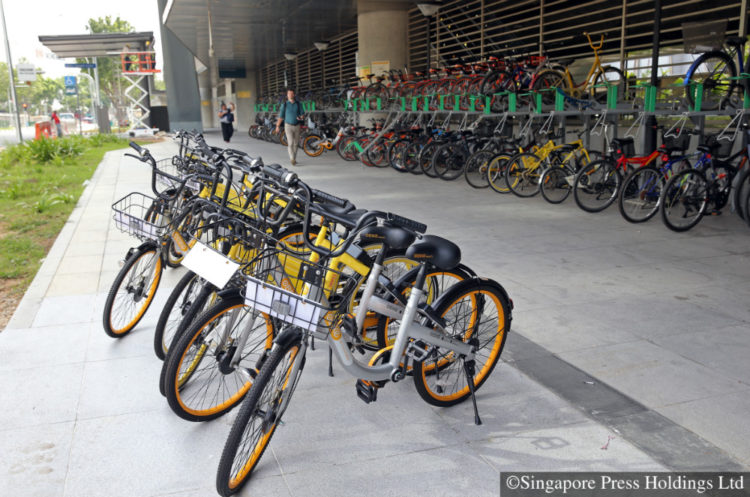 The agreement that bike-sharing firms signed will require their bikes to be parked within designated zones in Housing Board estates, parks and park connectors, and at MRT stations and bus stops.

Bike-sharing firms have agreed to use technology that determines if their two-wheelers are left in designated zones, in a bid to halt the indiscriminate parking that has led to complaints.

Though two already do, all five operators must have a geofencing feature – which creates a virtual boundary that can send out an alert when a bike enters or leaves an area – by the end of the year, according to an agreement they signed with the Land Transport Authority (LTA).

The National Parks Board and all 16 town councils are also part of the agreement, which will require bikes to be parked within designated zones in Housing Board estates, parks and park connectors, and at MRT stations and bus stops.

The LTA is also studying the use of infrastructure to enhance the accuracy of the geofencing, as well as the possibility of common standards for its usage.

The firms – SG Bike, GBikes, Mobike, oBike and ofo – which have about 30,000 bikes between them, welcomed the move by the authorities, saying this would help them strengthen current measures against inconsiderate parking, such as jacking up the price for users who have poor track records.

SG Bike and GBikes both have a geofencing system. Mobike country manager Sharon Meng said its geofencing solution will be in place by next month, while ofo will introduce its system by the year end.

National University of Singapore transport researcher Lee Der Horng said while geofencing would not ensure that misuse of bike-sharing would stop, he said the signing of the agreement showed firms were committed to resolving issues of indiscriminate parking.

Since shared bikes made their debut in January, some complaints have surfaced about them being parked haphazardly. In the first seven months, 278 bikes were impounded for this reason by the LTA.

Other forms of abuse have also been heaped on them, with two reported cases of shared bikes being thrown from the upper floors of HDB blocks.

On top of the impound fee, firms face fines for not removing badly parked bikes in a timely manner.

In the agreement, firms will also have to take faulty bikes off the road within a day and provide public liability insurance for users.

Operators have also agreed to share anonymous trip data with the LTA that will allow the authority to see high usage areas to determine where parking zones and cycling paths should be located.

The terms of the agreement will also extend to personal mobility devices or e-bikes, should the firms offer them in the future.

The LTA said it will continue to take action against indiscriminate parking, and will consider stronger measures against firms that do not abide by the agreement.

“In many cases, the users are the irresponsible ones,” he said.