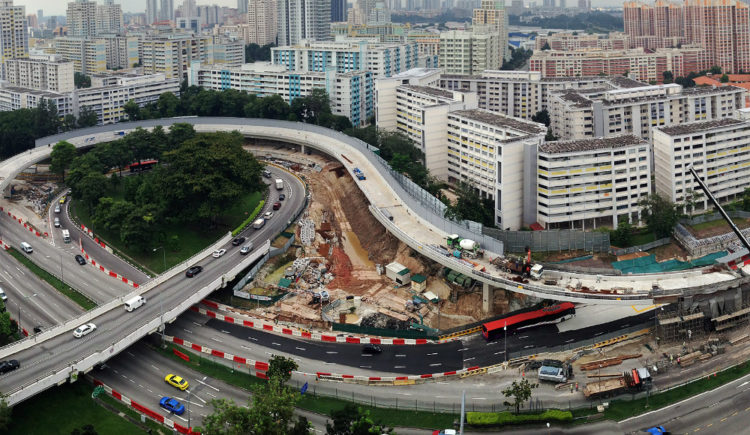 The Braddell Flyover under construction on Dec 6, 2016.

After more than four years and two delays, a new flyover connecting motorists from Lorong 6 Toa Payoh directly to the Braddell Underpass will open on June 11 at 6am.

The Land Transport Authority (LTA) said Monday (May 22) that as part of the project, a stretch of Braddell Road between Toa Payoh North Flyover and the Central Expressway (CTE) has also been widened from dual three-lanes to dual five-lanes.

The new flyover will allow motorists travelling from Lorong 6 Toa Payoh to connect directly to Upper Serangoon Road and Bartley Road via the Braddell Underpass, without having to join traffic bound for the CTE or Bishan Street 11 on Braddell Road.

Motorists heading towards the CTE or Bishan Street 11 should continue using the old Toa Payoh North flyover, the LTA said.

This segregation of traffic travelling towards different destinations will help smoothen traffic along Braddell Road.

To complete the traffic improvement scheme, the LTA is also building centre dividers along various stretches of Braddell Road. The authority said these can only be completed by end-June.

The project was initially undertaken by Hexagroup, which clinched the contract in late-2012 for $29 million.

The LTA then appointed Feng Ming Construction to complete the works for $29.9 million. The project, which was supposed to be completed by end-2015, was then pushed back to end-2016.

The third deadline was first quarter of this year (17), but the Manpower Ministry issued a stop-work order against Feng Ming after a random spot check on Feb 23.

The ministry found that shoring was not provided at excavated areas when required and the excavation works were not constructed in accordance with the professional engineer’s design.

Works resumed in early March and the LTA said then the project would be completed by June.

The 18-month delay however, pales in comparison to one which hit the Bartley viaduct. That project was completed in 2010 after a five-year setback, which was also caused by a contractor that went into financial crisis.