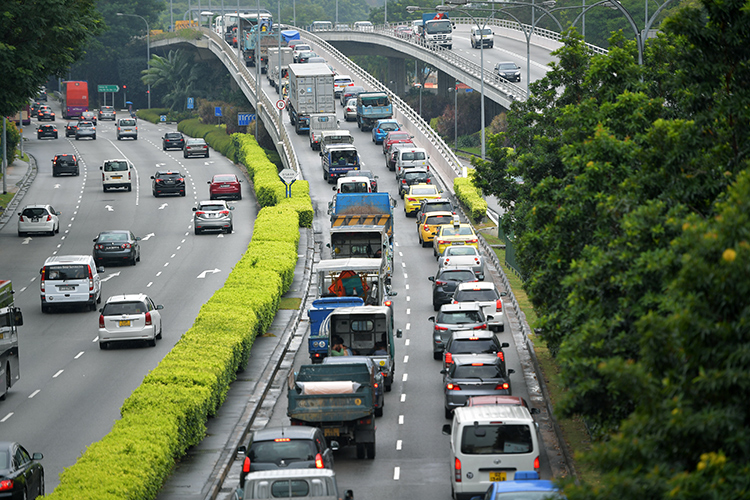 Traffic jams in Singapore affect all motorists and road users.

We all know the big factors that cause congestion.

Accidents, road works (which lead to lane/road closures) and a big population of private-hire cars on the roads are the most obvious ones.

Now what if it’s not raining, there are no road works and there are no accidents, but you’re still caught in a jam?

What if you leave at the same time every day but still experience varying traffic conditions?

Here are five other possible causes of traffic jams in Singapore.

1) The traffic light timings have been slightly altered.

We don’t know how traffic light timings are determined or changed.

But we can all imagine that if the powers that be changed the traffic light timings – even just a little bit – this would be one of the biggest reasons for traffic jams in Singapore.

Imagine the knock-on effect of say, the duration of a green light being shortened by five seconds.

That’s enough to cause the line of vehicles on that side of a junction to start building up. 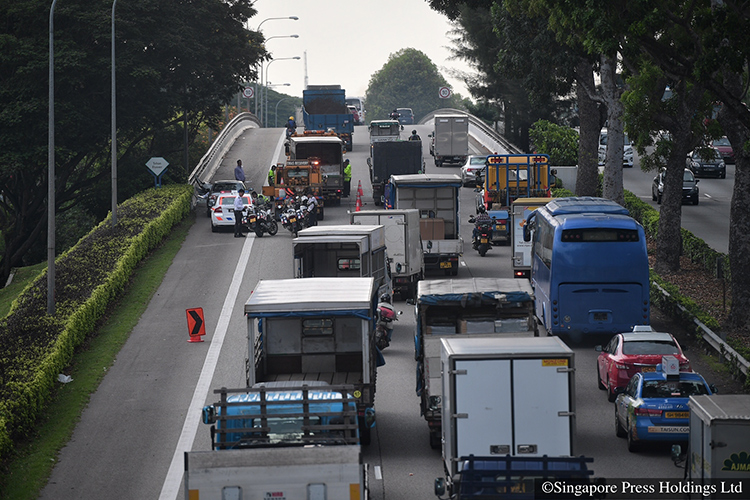 The traffic jam near the Jurong Town Hall exit where an accident occurred involving a lorry and a trailer on 23 March 2017.

2) A few more road hogs are driving today and they are going the same way as you.

This is one of the causes of traffic jams in Singapore, especially on two-lane carriageways.

There’s a road hog (who deserves a summons and demerits) in the fast lane going below the speed limit.

But you can’t overtake that driver because the slower lane is (rightly) occupied by a car (or cars) travelling at the speed limit.

You are stuck, and you can bet that there is a long train of cars that are forming up behind you. 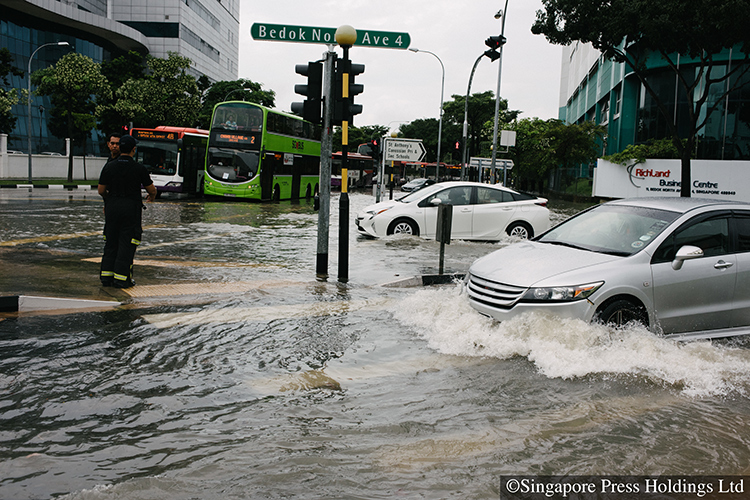 Flooded roads can cause a jam. But in theory, there should be no traffic if the weather is sunny and there are no accidents.

3) Multiple private-hire vehicles being driven in a reckless manner.

I know many drivers who will say this is the number one cause of traffic jams in Singapore.

Imagine travelling along a four-lane road, surrounded by private-hire drivers who all keep switching lanes.

Add “last minute lane changes to make their exit while nearly causing accidents” to that scenario.

This means multiple drivers having no choice but to keep braking and slowing down.

In turn, the cars behind also start braking and slowing down.

As more and more cars begin travelling slowly, you can see how this might lead to more traffic jams in Singapore. 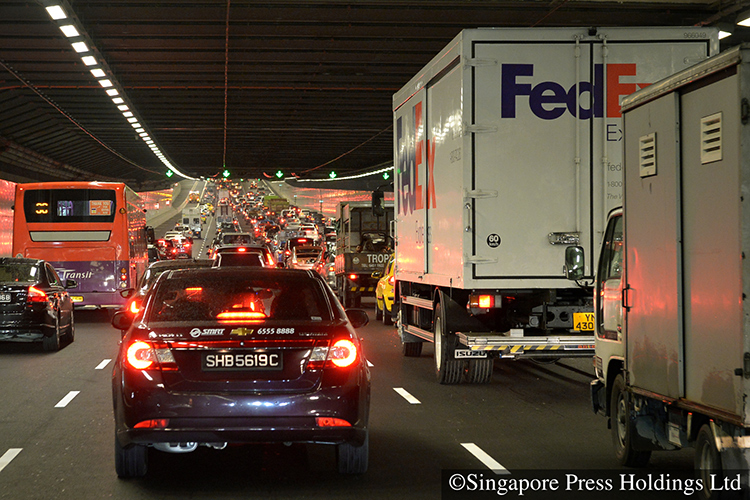 Long lines of red brake lights have become a common sight in Singapore.

4) Everyone is going by the shortest and most direct route (yourself included)!

Singaporeans are a practical bunch and common sense dictates that we should take the shortest route to our destination.

However, if everyone heading toward a particular area is taking the same route… you know what happens.

Traffic jams in Singapore (and around the world) are caused by motorists going towards the same direction at the same time.

The solution? Be more creative. That’s what Google Maps is for.

Plot the possible routes you can take to work and leave earlier (or later, if allowed).

In our office, I often find myself taking the cargo lifts to get to my floor.

I do this to avoid everybody else who is taking the same group of three lifts – a different kind of traffic jam in Singapore!

The downside is that I have to walk a bit further than usual.

But the advantage is that I spend less time waiting for the lift. And when it arrives, I’m the only one riding it to my floor!

5) Traffic Police are watching/patrolling the stretch of road you’re on.

Traffic jams in Singapore can also be caused by the traffic police.

If you’re travelling along a stretch of road and see that everyone around you is travelling below the speed limit, you know the cops are watching.

Be it via a speed camera on a bridge or several officers on motorcycles, it’s enough to cause traffic to slow down.