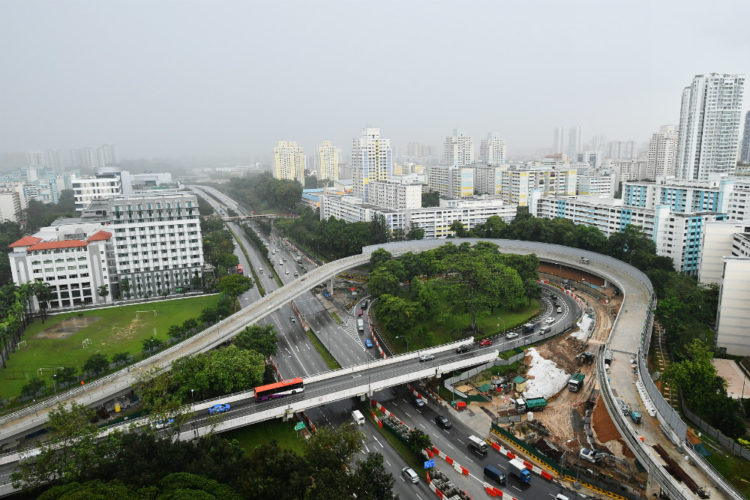 The Braddell Road flyover extension seen on 3 March 2017. Once again, the project is facing another deadline extension, due to a stop work order issued by Ministry of Manpower (MOM) on 23 February 2017, after a surprise inspection which detected several safety breaches by main contractor Feng Ming Construction.

After having been delayed three times, the troubled Braddell Road flyover project has a new deadline.

It is now slated to be completed by June, the Land Transport Authority (LTA) said yesterday. Its original deadline was end-2015.

A spokesman for LTA told The Straits Times that it had been working closely with the public works project’s main contractor, Feng Ming Construction (FMC), to “rectify, review and improve” safety measures after a stop-work order (SWO) stalled progress on Feb 23.

Safety inspectors from the Ministry of Manpower (MOM) discovered several safety violations during a random spot check at the worksite. The SWO was lifted on March 8, and the works have now fully resumed, said LTA .

FMC director Lim Hong Beng told The Straits Times his firm would complete the project at all costs.

He said in Mandarin: “There is no need to worry that we will abandon the project – this is a government job, and it shall be completed. True gold does not fear the test of fire.”

But he declined to comment on revelations about another SWO that was issued to his company from July 11 to Aug 4 last year at the same worksite, because of a height-related safety issue.

The Straits Times also found that another public works project contracted to FMC to widen a 900m portion of the Alexandra Canal has been delayed as well.

Started at end-2014, it was due to be completed last year.

The deadline has been pushed back to the third quarter of this year, because of the need to divert services in the constricted area, said national water agency PUB.

Since the Braddell Road flyover project was commissioned in 2012, it has been fraught with delays.

The first contractor, Hexagroup, ran into financial difficulties. This resulted in a temporary stoppage of work.

FMC won the second tender in 2015. Works were expected to be completed by the end of last year, but were again extended, to March.

These delays and issues surrounding FMC have raised questions as to why it was picked in the first place, especially since the two firms appear to be linked.

This comes even as the authorities step up penalties for SWOs, following concerns over high numbers of workplace fatalities.

Last year, 130 SWOs were issued. Six were handed out in the first two months of this year.

More than 1300 inspections are carried out each month.

Five demerit points were issued for each SWO for the Braddell site, bringing the total number of demerit points awarded to FMC to 10, said an MOM spokesman.

Any contractor that accumulates 25 demerit points will be barred from tendering for new jobs.

Applications for foreign workers’ work passes will also be denied, and the business will be placed under a surveillance programme.

LTA will also review the reasons for project delays, and “evaluate if there is a need to seek compensation from the contractor”, its spokesman said.

The executive director of the Singapore Contractors Association, Mr Lam Kong Hong, said that while MOM’s spot checks do disrupt operations, those that manage their worksites well are usually spared targeted inspections.