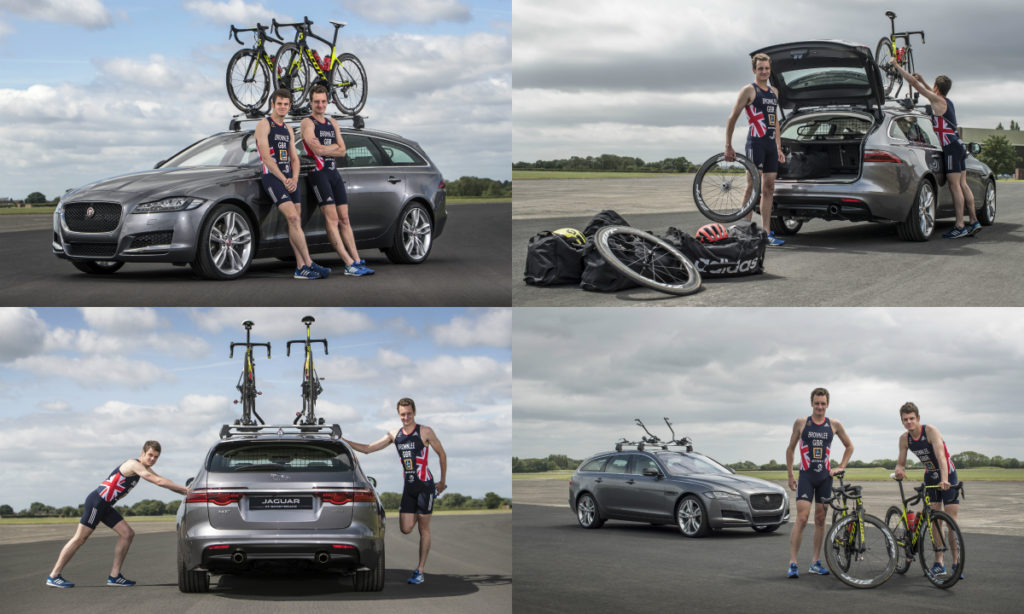 Olympic triathletes Alistair and Jonny Brownlee have reignited their rivalry in a triathlon with a difference – behind the wheel of a Jaguar XF saloon and XF Sportbrake.

The pair competed in a trio of challenges to show off the dynamic performance, increased load space and parking technology of both vehicles.

First was the swim, otherwise known as the ‘Smartcone Slide’, pitting the brothers against each other in a slalom contest on a wet skid pan that proved the all-wheel-drive capability, outstanding traction and overall performance of the Jaguar XF Sportbrake in low-grip conditions.

Round two put the pair on their bikes for ‘Pedal to Pack’, as they raced to stow their equipment the quickest in the 565 litres of rear load space and on the versatile roof rack of the new XF Sportbrake estate.

With all to play for in the final challenge ‘Race to Reverse’, the brothers were tested with a parallel park in the XF saloon. Alistair took the wheel and manually tried to park the car in the shortest possible time, while Jonny put his faith in the semi-automated Park Assist function, proving the difference as he triumphed over his brother to take overall victory.

“Alistair might have got the better of me in the Olympics, but this one is really going to hurt him. He prides himself on his driving skills, so to beat him here will give me serious bragging rights. This might have been a little different to what we’re used to, but it was great fun to test the capability of the Jaguar XF and XF Sportbrake. They’re both very impressive cars,” said Jonny Brownlee, World Champion triathlete

“As a triathlete, I’m used to being in control of my own performance. I’ve also always prided myself on my parking, so when it came to the final challenge, I wanted to make sure I was in charge. As it turned out, I would have been better off trusting the XF’s technology. I’ll get Jonny back next time!” said
Alistair Brownlee, two-time Olympic Triathlon Champion