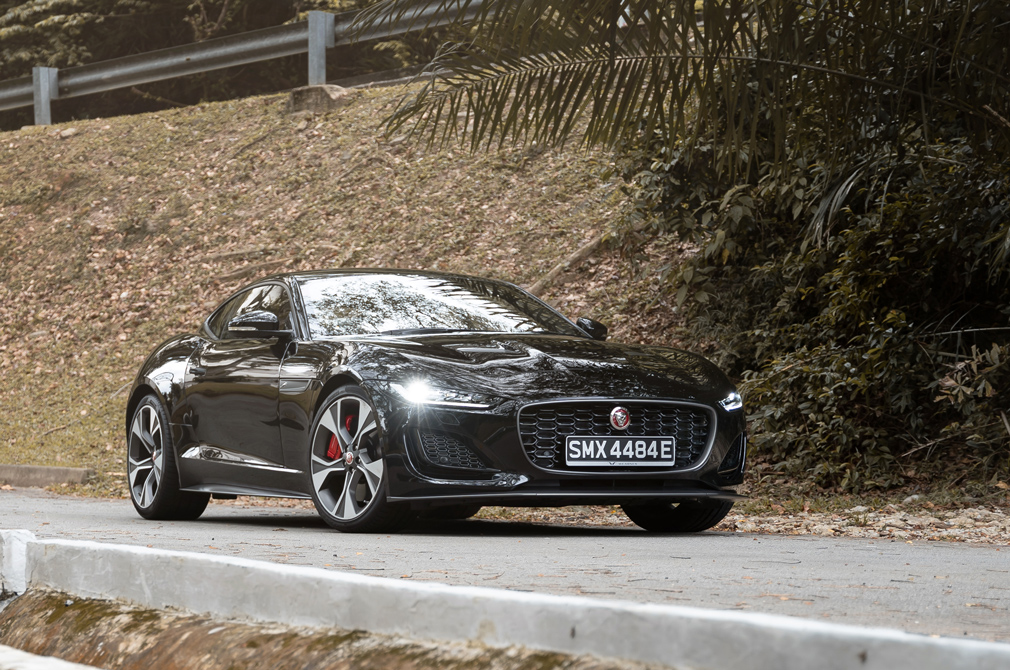 There are many reasons to buy a sports car like the Jaguar F-Type. Naturally, foremost among these are a striking design and fantastic performance.

Nobody buys an F-Type (or any sports car, for that matter) because it is practical and gets good fuel economy. Sports cars are not rational. Buying one is an emotional decision.

I adore the F-Type’s dramatic character and its flair for histrionics. This is especially true of the V8-powered Coupe and Roadster, whose soundtracks are both addictive and intimidating.

Recently facelifted, the Jaguar F-Type sports new exterior styling and a host of cabin and chassis upgrades. Do they make the F-Type even more compelling than before? And more importantly, can this 2-litre model emulate its rowdier siblings? 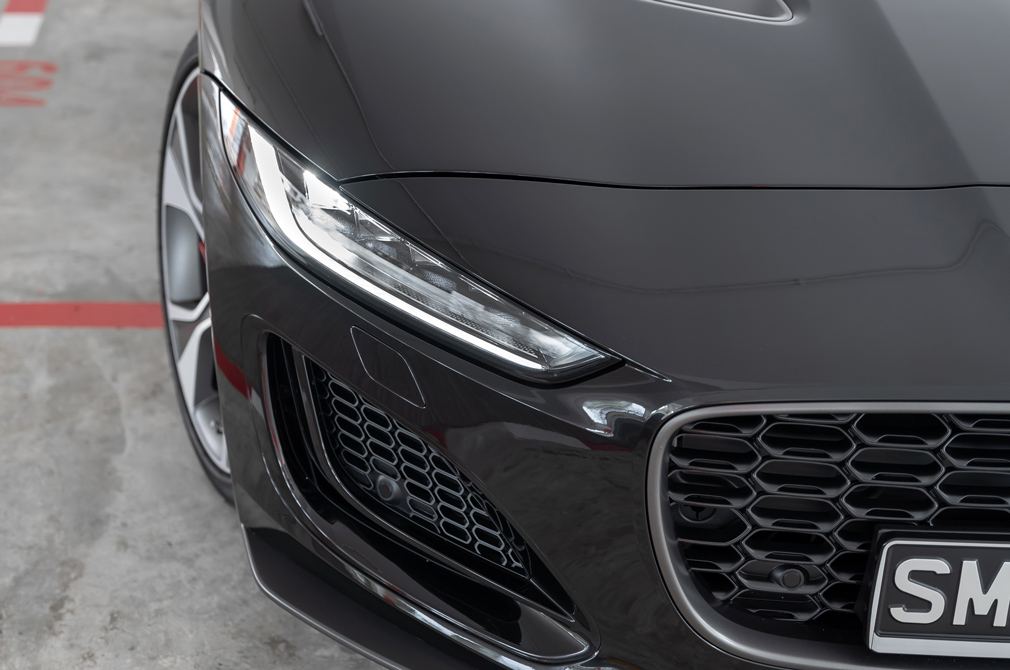 Place the latest F-Type beside its predecessor and you will swear that the facelifted model is really an all-new car.

The new Jaguar F-Type looks even more aggressive, with slim LED headlights replacing the previous larger units. These make the coupe seem like it is squinting.

There is also a new clamshell bonnet with “liquid surfacing”, along with a pair of functional air vents.

The rear end looks untouched, but the tail-lights are slightly different. They feature a “chicane” outline and look like the ones on the all-electric Jaguar I-Pace.

A centrally located exhaust sits below the rear bumper, adding to the coupe’s dynamic design. This is only for the 2-litre models, though, as the V8 variants have quad-exhausts. 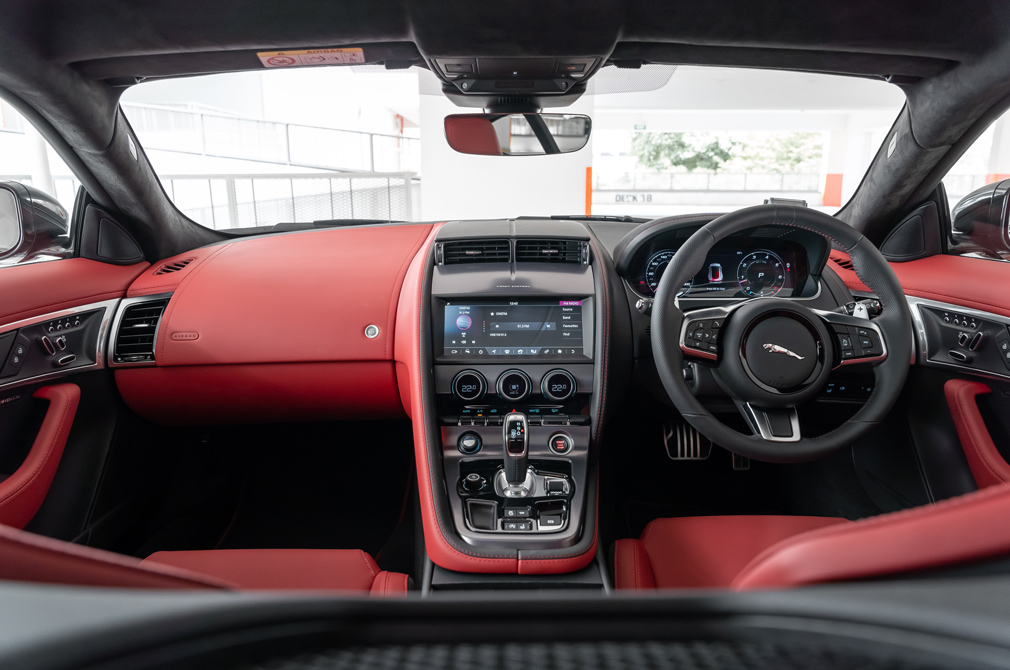 Digitalisation is the name of the game here. When the F-Type was initially launched in 2013, it still had analogue gauges. Those have now been replaced by a 12.3-inch Interactive Driver Display, which offers several layouts for the driver to choose from.

The Touch Pro infotainment system has also been enhanced. With the previous physical buttons surrounding the screen removed, the display is now wider and rectangular instead of square.

Apple CarPlay is standard (along with Android Auto), but it would have been even nicer if this was the wireless version. The presence of a cable will mar the otherwise neat cabin.

The infotainment menus themselves are relatively intuitive. However, their loading times could definitely be snappier. 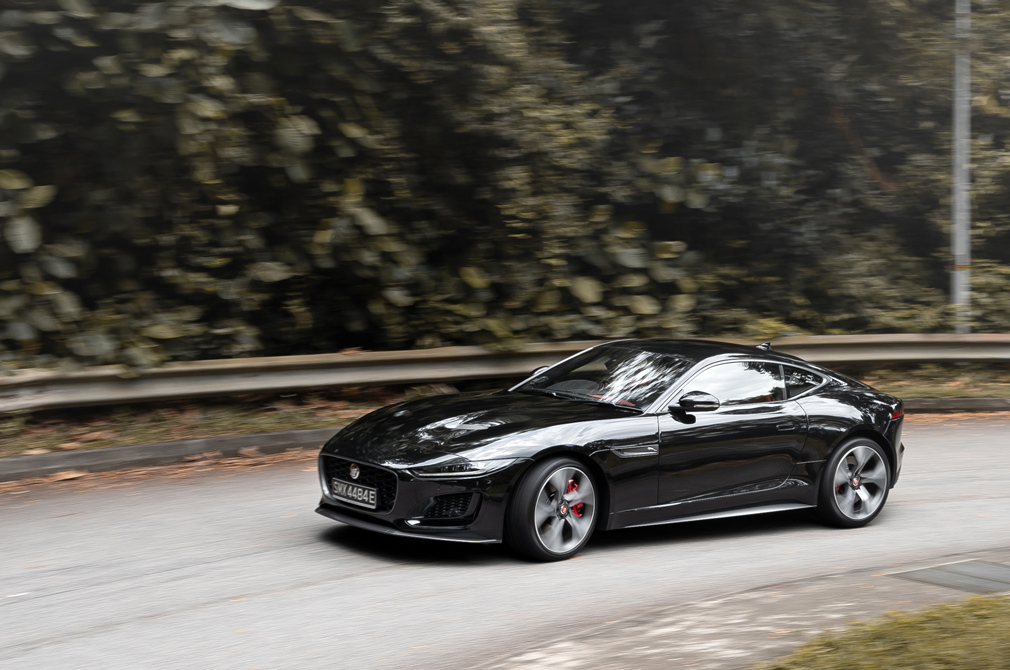 There’s no lag when it comes to the Jaguar F-Type’s performance, though, despite the small displacement engine.

I would have liked to have peered into that long and wide bonnet and seen a supercharged 5-litre V8. Instead, nestled in this test-unit is a 2-litre inline-4.

Outputs are sent to the rear wheels through the vaunted 8-speed automatic gearbox. Pin the accelerator to the floor and the F-Type 2.0 hits 100km/h in a respectable 5.7 seconds.

Jaguar engineers have made tweaks to the suspension, which consists of double wishbones at both the front and the rear. The upgrades include new springs and anti-roll bars.

Inside each damper, the valves and control algorithms have been tweaked to improve both low- and high-speed control. 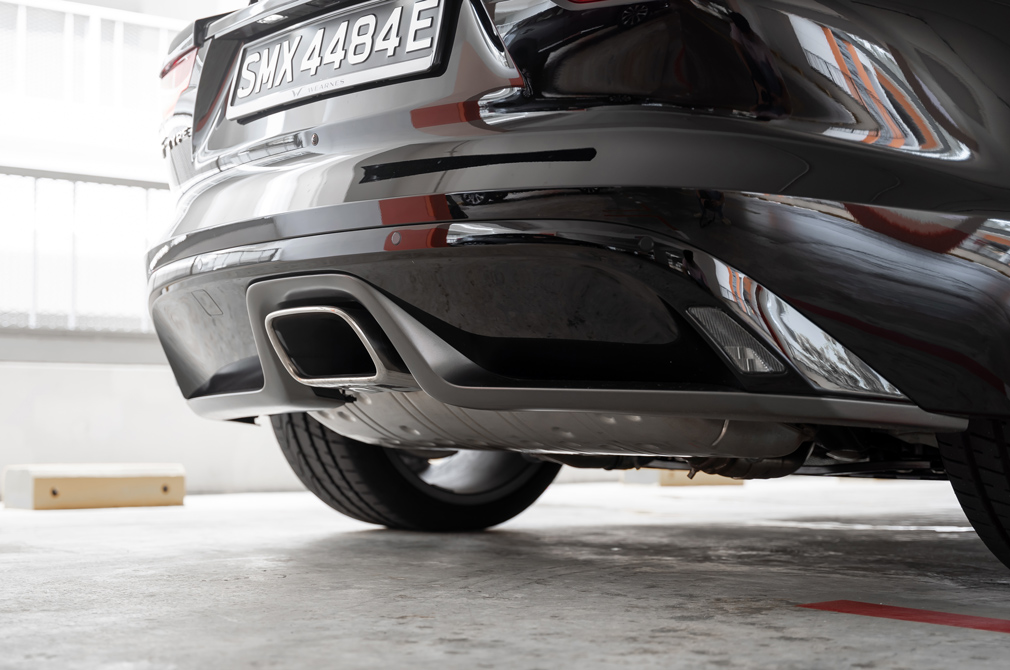 Compared to its predecessor, the current F-Type is more “pointed”. At the same time, it deals with undulations in a much neater manner – even speed strips feel like gentle thumps instead of hard knocks.

That said, the Jaguar F-Type still feels weighty despite its aluminium construction. It does feel more eager than before when tasked with rapid directional changes, but that heftiness still lurks in the background.

However, before you dismiss this Jag, bear in mind that this is a relatively large coupe and not a tiny sports car. Temper your expectations and the F-Type is agile considering its dimensions.

The brakes feel very strong and are easy to modulate. Overall, the Jaguar F-Type feels tighter than before, making it easy to tuck into corners. The nose feel has also been improved.

So, the 2-litre Jaguar F-Type is relatively quick and handles better than before. But it is not as dramatic as its V8-powered siblings.

Four-cylinder engines may not sound fantastic, but they can be loud and raucous. Just look at what Mercedes-AMG has done with the CLA45. Two litres and 4-cylinders, but it can create quite a din.

The F-Type 2.0, on the other hand, does not roar upon startup. Revving the engine while the car is at a standstill produces no rorty sounds either. You will not have to worry about being reported to the NEA, LTA or Traffic Police.

On the go, pressing the button to open the exhaust and selecting “Dynamic” mode helps. Redline the motor and the soundtrack does become more engaging, with some popping on the overrun. 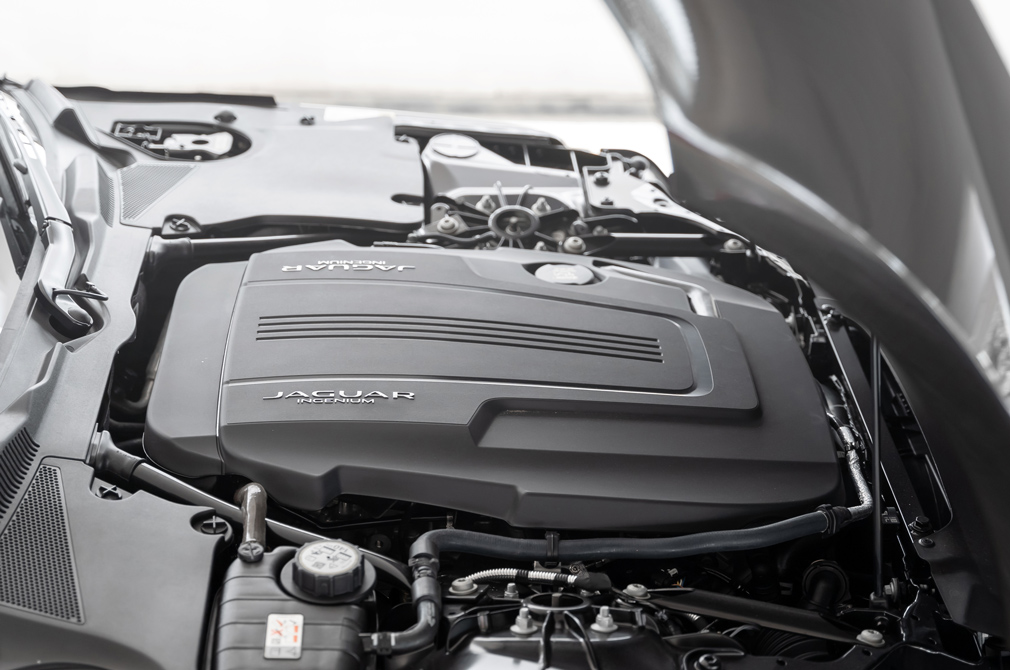 Jaguar F-Type’s turbocharged 2-litre can punch hard, but does it less dramatically than the V8-powered models.

The previous Jaguar F-Type Coupe I drove, however, was even more extreme. Its supercharged 5-litre V8 did more than just deliver 542hp (550PS).

It roared like a savage beast. Overruns were punctuated by endless, machine gun-like crackles. The pops sounded like the crack of a bullwhip. It even intimidated lorry drivers.

The Jaguar F-Type’s gorgeous lines and numerous improvements make it more convincing and fun to drive than before. For most drivers, the F-Type in 2-litre guise will do.

Wearnes Automotive seems to think so, too, since it is banking on the F-Type 2.0 to make up the bulk of their sales. The V8 models are only available on an indent basis.

But you don’t look at a sports car and say, “Yes, this is enough.” You buy a sports car because of how it makes you feel. There is nothing rational about this decision.

So, go on then. Be emotional and act irrationally. If you’re in the market for one, get an F-Type V8 and bathe in the guilty pleasures it offers.

For it won’t be long before the only Jaguar sports car/s available will be electric. 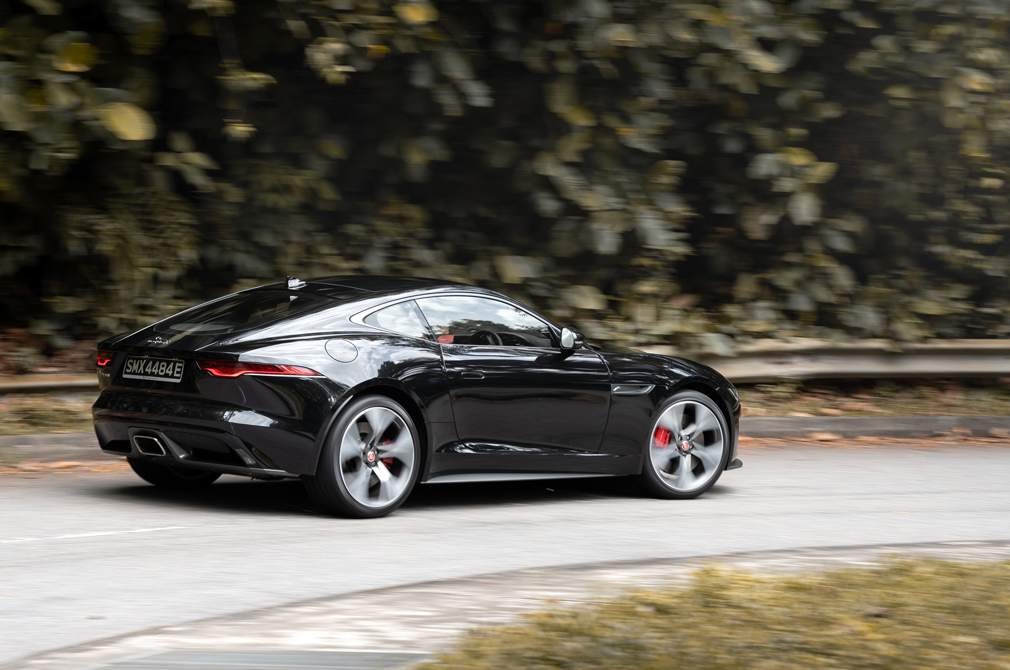