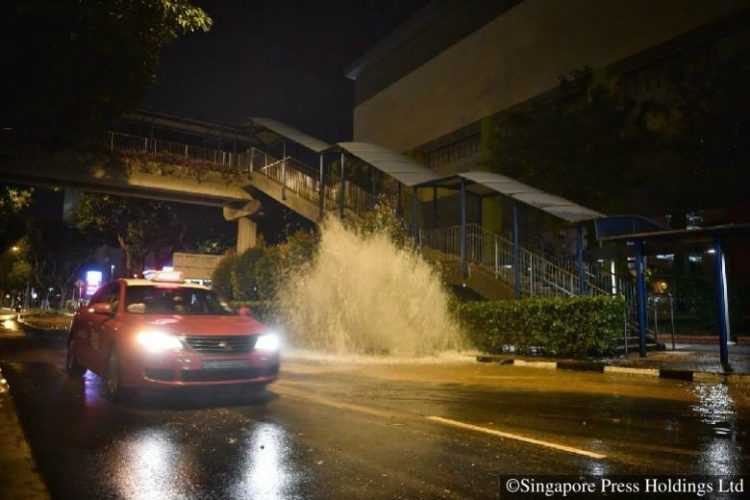 A burst pipe in Tampines Avenue 4 on Christmas morning at around 6am sent a fountain of water gushing up to a height of around 3m.

Repair works to the burst pipe in Tampines Avenue 4 on Christmas morning (Dec 25) were completed that evening at 7.30pm, national water agency PUB said in an update on Tuesday.

The affected lane in the two-lane road next to Junyuan Primary School towards Bedok Reservoir Road has been reopened. Investigations into the cause are still ongoing.

The burst pipe sent a fountain of water gushing up to a height of around 3m, with only one lane on the road passable to traffic due to the flooding when The Straits Times was at the scene at about 6am on Monday.

Mr John Lee, a 31-year-old IT engineer, told The Straits Times that he was cycling to the Tampines West MRT station at 7.15am to get to work, and was shocked to see water shooting up in the air across the road.

He said: “About two workers were already there looking at the water, but they couldn’t seem to be able to do anything. The water was spraying around 2m high when I passed by.”

A few cars driving by were able to avoid the burst pipe, he said.

“I am concerned about how the pipe burst. Thankfully it didn’t seem like sewage water, as there was no smell. But even then, it seems like a huge waste of water,” he added.

In a statement on Monday afternoon, national water agency PUB said that repair work was under way and was expected to be completed by the evening.

A section of one lane on the two-lane road was temporarily closed to facilitate repair work, the agency said.

PUB said that its water sensor system detected a leak on a pipe in Tampines Avenue 4 at about 5.30am and its field team was dispatched immediately.

The leak was traced to a 700mm diameter pipe supplying water to the Tampines area.

PUB added that there was no disruption of water supply as there were alternative feeds built into the network serving the area. The affected pipe was isolated and the leak was stopped at about 8am.

“Time was needed for our field officers to complete the necessary site investigations and ensure the adequacy of alternative feeds supplying water to the area before shutting the valves on the affected pipe,” the statement said.

“We apologise for the inconvenience caused to road users. We will carry out further investigations to find the cause of the leak.”