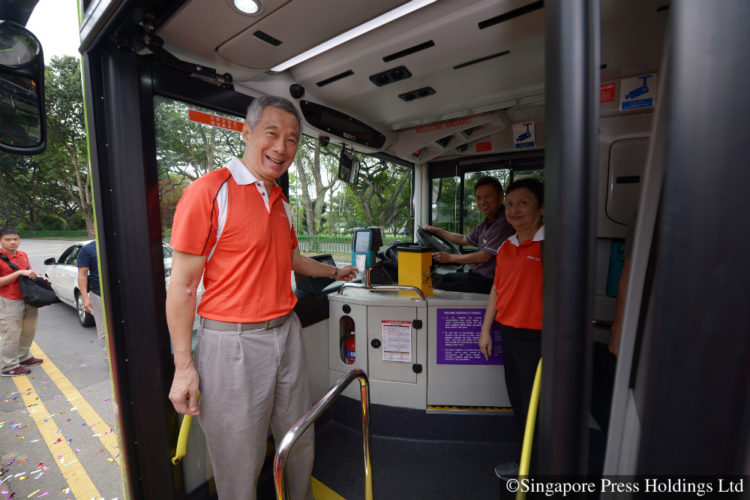 The capacity of 70 percent or 218 bus services here have been boosted since the programme was rolled out in September 2012.

LTA said that the programme, alongside the transition to the Government’s bus contracting model in 2014 where operators have to meet higher service standards, have shaved bus intervals from 30 minutes to 15 minutes.

Intervals for feeder services during peak periods have also been trimmed to six to eight minutes, from more than 10.

The BSEP was introduced due to burgeoning demand that the two publicly listed transport companies, SBS Transit and SMRT, were unable to cope with on their own.

In an event on Saturday (Dec 9), Prime Minister Lee Hsien Loong commemorated the programme’s conclusion by launching a new bus service, 71. It is the 80th service introduced under the BSEP.

PM Lee, who is also MP for Ang Mo Kio GRC, took a short ride from Block 220 to Block 341 in Ang Mo Kio Avenue 1 before meeting residents at the Teck Ghee Market and Food Court.

LTA, which worked with the four public transport operators to roll out the BSEP, also introduced 22 City Direct Services over the past five years that take commuters on express routes between housing estates – such as Bedok, Hougang and Jurong – and the city area.

The authority said many of the new services are feeders or short trunks to “improve local connectivity to major transport nodes and key community and commercial facilities” in the heartlands, especially in newly developed areas where populations and ridership have been growing.

These areas include Choa Chu Kang, Sengkang, Punggol and Yishun.

Senior Minister of State for Health and Transport and Sengkang West MP Lam Pin Min said as the transition is made to the bus contracting model, a slew of new initiatives will be rolled out, on top of the addition of more new services in future to serve younger estates.

Among the initiatives – hybrid and electric buses over the next few years. Trials for autonomous vehicles will also likely be introduced from 2022 in new towns here.

Dr Lam said: “The bus industry is going though a very quiet revolution without any big fanfare. But if you do a survey with commuters on the ground, many will feedback that indeed bus services have improved over the past five years and I believe this will be an important modality in terms of public transport for Singaporeans.”

Senior transport research consultant at Nanyang Technological University, Mr Gopinath Menon, said the Government intervened “at the right time” and gave the BSEP an “A plus” rating.

He said: “Trains were having a lot of problems three to four years ago. The BSEP was a timely measure to solve capacity issues since trains take a long time to build.”

Ang Mo Kio resident Madam Sumi Kamin, 44, who can now take bus 71 to Bishan MRT for a shorter commute to her Raffles Place office, said she used to wait “very long” for buses.

“They were not easy to board,” she said. “They were packed, smelly and sometimes dirty as well. This has changed for the better. Buses are now more frequent and they are no longer as over-packed.”

Similarly, Ms Yeo Swee Cheng, 67, a housewife and Ang Mo Kio resident of 40 years said she now has a direct route to Bishan MRT station which makes it convenient to pop by the Junction 8 mall, and hop onboard the Circle Line. She said: “It’s a short distance but to get there in the past we had to take two buses which can be especially troublesome when it rains.”