Car repairs may be cheaper after elimination of warranty curbs | Torque
Loading posts...
0 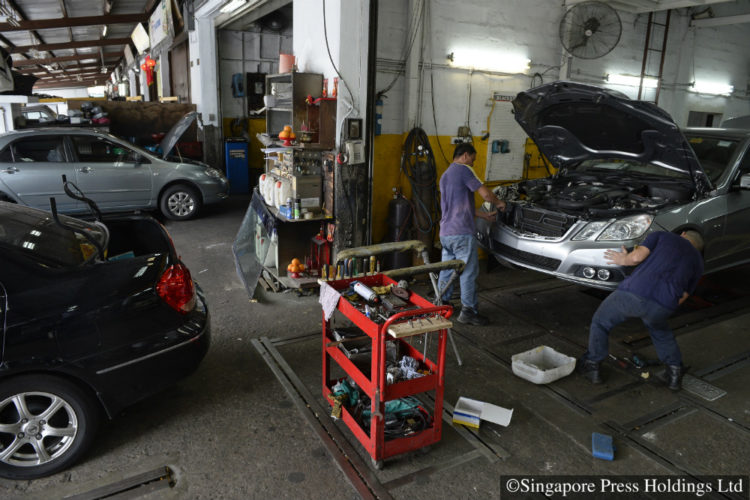 Automotive workers working on a car at a workshop at Sin Ming Drive.

Come next year, drivers will be able to fix their cars at a workshop of their choice – sometimes at far lower prices – and not worry too much about losing their warranty, the Competition Commission of Singapore (CCS) said in a statement yesterday.

Under current warranty restrictions, drivers may service or repair their cars only at authorised workshops. Fixing their cars at independent workshops will void the warranty.

The CCS said it has worked with major car dealers to remove these restrictions from existing and new warranties. The move comes after the commission concluded an inquiry into the supply of car parts.

This restriction may, in turn, allow authorised workshops to charge customers higher prices for servicing, repair and parts, it added.

The change will mean that car dealers can void warranties or reject claims only if they establish that independent workshops had damaged or caused defects to the vehicle under warranty, the watchdog added.

CCS chief executive Toh Han Li said: “The removal of the warranty restrictions will facilitate a more competitive market for car repairs and servicing, with more choices for car owners, and opportunities for existing and new independent workshops.”

According to the CCS, market feedback indicates that authorised workshops can charge two to three times as much as independent workshops for comparable parts and servicing.

For example, an oil filter change at the independent workshop could cost around $100, but an authorised one will charge about $200, said an industry source.

Mr Francis Lim, president of the Singapore Motor Workshop Association, said the changes will “open up the market” and give car owners more choice.

Mr Lim, who is also group director of BCC Automotive, said authorised workshops require cars under warranty to be taken in for servicing after they clock a certain mileage.

If the owner decides to take his car to an independent party instead – which means the authorised workshops will not have any servicing records – they can void the warranty, he said. However, this will not be the case any more, he added.

Mr Nicholas Wong, general manager of Honda agent Kah Motor, said: “As long as the (independent) workshops are good and are able to do the work prescribed, I don’t see why not.”

But he said if the workshop damages the parts, and customers try to make a warranty claim, it will be an issue.

Mr Ron Lim, general manager of Nissan agent Tan Chong Motor, said: “To compete for the business, after-sales service is something we will improve on our end, in terms of professionalism and the turnaround time.”

Still, he added, cars are getting more high-tech, with lane departure sensors and forward collision warning systems. “(It matters to) manufacturers that customers receive appropriate repairs and servicing for the car, so it doesn’t affect the vehicle’s performance,” he said.

Mr Joey Lim, managing director of independent workshop Harmony Motor, who is also the Singapore Motor Workshop Association’s secretary, said independent workshops will now have to beef up their technical know-how to service newer car models, which are typically those still under warranty.

According to the association, which has more than 700 members, there are about 2500 motor workshops in Singapore.

Related story: How can I remove minor scratches from my windscreen?
Related story: Can I use modern engine oil in my classic car?