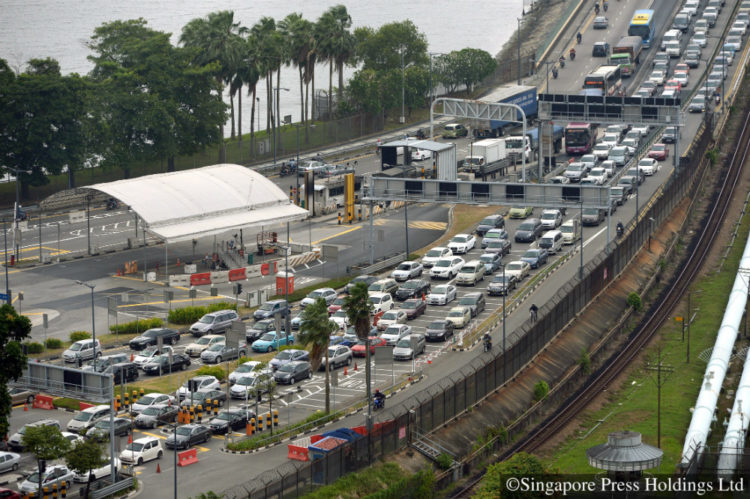 Singaporean Beverly Ng travels to Johor regularly to have seafood.

On Dec 20 last year, the 25-year-old teacher boarded an SBS Transit bus at the Woodlands checkpoint at 9am.

It got her to the Johor Baru checkpoint at 10.30am, but she had to wait until after 12pm before her passport was endorsed by an immigration officer.

The long wait she had to endure was because of the thick crowd of people and vehicles at the checkpoints during the December school holidays.

But the inconvenience will be a thing of the past when the cross-border MRT service between Bukit Chagar in Johor Baru and Woodlands North in Singapore opens by Dec 31, 2024.

When ready, the 4km Rapid Transit System (RTS) Link is expected to bring about two key benefits: Provide seamless connectivity and ease the current congestion at the Causeway.

Travellers will need to clear Customs and immigration only once, at their point of departure.

Malaysian Prime Minister Najib Razak highlighted the need to resolve the congestion at the Causeway, which sees more than 300,000 crossings daily.

He noted the wait to get across can stretch as long as three to four hours, especially during festive periods and school holidays.

The RTS, at its peak, can ferry 10,000 passengers an hour in each direction. This works out to having an additional capacity for 60,000 commuters to cross the Causeway during peak hours.

In today’s terms, the extra capacity would cater to about two-thirds of the commuters crossing during the morning peak.

The RTS Link has been a long time coming. It was announced in May 2010, and slated to be completed by this year. But details could not be worked out in time, and the completion schedule was pushed to 2024.

But while it is expected to be a boon for Singaporeans and Malaysians now caught in traffic snarls along the Causeway, there are a few wrinkles that need to be ironed out for the RTS to reach its full potential.

First, will the transport connections to and from the RTS on both sides be enough to draw people to use it?

Transport researcher Lee Der Horng from the National University of Singapore believes the commuters who will benefit most from the RTS are those who live in Malaysia and travel daily or regularly to Singapore.

But would a Malaysian who lives in Senai in Johor and rides a motorcycle to work in Ubi make the change, he wondered.

The authorities have to address the challenge of first-and last-mile connections to attract more people who currently commute from point to point, he added.

On Singapore’s end, the RTS will connect directly to the upcoming 31-station Thomson-East Coast Line, which will open in phases from next year to 2024.

Another point to address is the flow of passengers at the immigration checkpoints on either side.

Like the future high-speed rail line between Singapore and Kuala Lumpur, the RTS Link will have a joint Customs, immigration and quarantine facility at both terminus stations.

While this is convenient for travellers, there is still the potential for bottlenecks.

The challenge is to arrive at that fine balance between ensuring security and a smooth flow for commuters to board the trains.

Officers at the land checkpoints have been intensifying checks amid the rising terror threat which, in turn, has contributed to a longer waiting time.

Similarly, the RTS Link must be properly secured.

The checks, however, should not be so onerous that Causeway traffic jams are transferred to the RTS Link in the form of human jams.

With the 4km line, it would take only minutes for an MRT train to travel between Bukit Chagar and Woodlands North.

It is thus important to keep an eye on how long it takes to clear Customs and immigration, lest the “Rapid” in RTS becomes a misnomer.