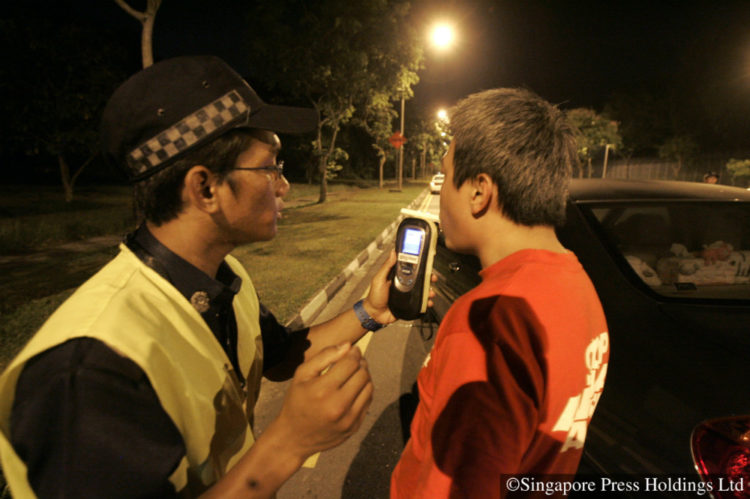 Motorists being stopped at Tampines and Outram roads, with some pulled over for breathalyser tests.

Under the law, a person who had been convicted of being “in charge of a vehicle” while drunk (such as being behind the driver’s wheel) and is then caught on another occasion for driving under the influence of alcohol can get away with a fine.

But if the offences took place the other way around, the law calls for a mandatory jail term. That is also the case if the person is caught the second time for the same offence.

CJ Menon held “this simply cannot be right and the anomaly is likely to have been the result of legislative oversight”.

“If that is the case, legislative reform would be desirable,” he added in judgement grounds on Wednesday (Oct 4).

He made these comments in a case in which he reduced a motorist’s one-week jail term to a $5000 fine.

Pua Hung Jaan Jeffrey Nguyen, 34, had failed a breathalyser test at a police road block along Whitley Road at about 4.50am on Oct 29 last year. He pleaded guilty in January to driving while having excessive alcohol in his blood under s67(1)(b) of the Road Traffic Act.

He was sentenced to a week’s jail and disqualified from driving for 30 months – after the district judge took into consideration that in 2012, he had been convicted under s68(1) of being in charge of a vehicle while under the influence of alcohol.

He appealed to the High Court and his lawyer Anand Nalachandran called for a fine and disqualification instead of jail. CJ Menon reduced the jail term to a $5000 fine but did not change the length of the driving ban.

The chief justice also pointed out an argument made by the prosecution when the case was in the lower courts. It was highlighted how a person who had been found guilty of seating behind the wheel of a stationary car while drunk would be “incentivised” to drive off the next time he was under the influence of alcohol to try and avoid a jail term.

When contacted, a Ministry of Home Affairs spokesman told The Straits Times that the ministry “is currently reviewing the penalties under the Road Traffic Act for irresponsible driving, including driving under the influence of alcohol”.

“We will study the High Court’s judgment as part of this review,” she said.

Related story: Stop your loved ones from drinking and driving
Related story: Drink-driving checks may be conducted anytime and anywhere