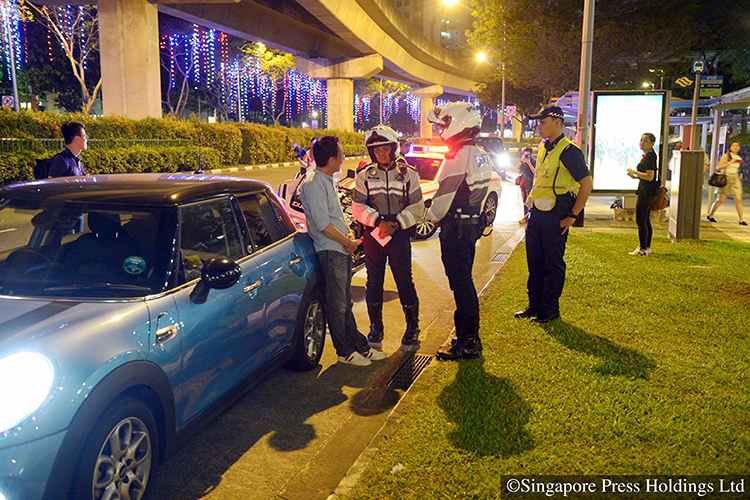 The traffic police conducted an islandwide anti-drink driving operation on 20 Dec 2017. Traffic Police officers chatting with a motorist who had been driving unsteadily near Rumbia LRT station in Punggol around 8.30pm. The officers tailed the driver briefly, observing him, before pulling him over. The man was cleared after passing the breathalyser test.

Motorists who drink and drive may face stiffer penalties amid a rise in accidents related to drink driving.

Speaking to about 100 people at the launch of the Anti-Drink Drive Campaign 2018 at Zouk in Clarke Quay, Ms Sun also noted that there has been a rise in accidents related to drink driving.

From January to September, there were more than 120 such accidents, a 20 per cent increase from the same period last year, she said.

More than 1,500 people have been arrested, with most accidents caused by drink drivers running red lights and exceeding speed limits, she added.

Stiffer penalties are necessary, she said, considering the harm caused to not just the victims, but also their families.

The authorities are still in the midst of reviewing the penalties.

It is not something that can be implemented overnight, as there are several channels to clear, said SAC Lim.

Currently, anyone caught drink driving will be disqualified from driving for a year, and can be fined up to $10,000 and jailed for up to a year.

If the driver gets into an accident, the penalties are heavier, especially if anyone is harmed, with steeper fines, disqualification for at least 20 years, and jail terms of up to five years.

Drink-driving checks may be conducted anytime and anywhere

One piece of good news is that from January to September, the number of drink-driving offenders arrested in enforcement operations, such as roadblocks, has dropped 2.5 per cent, compared with the same period last year, said Ms Sun.

SAC Lim saw the figure as a positive sign that deterrent measures are working.

“Our job is to make sure people understand, and to know, ‘Better don’t (drink and drive), the police (are) out there watching’,” he said.

This year’s Anti-Drink Drive Campaign, organised by the Traffic Police and Singapore Road Safety Council, is part of outreach efforts during the festive season to remind motorists not to commit the offence.

Stop your loved ones from drinking and driving: Police

The campaign’s tagline is “Drink and Drive is a Deadly Mix”, and campaign messages will be spread through posters, digital banners on phones and a new road safety video.

“Public education will remain the cornerstone of our efforts against drink driving, and will be backed by strong enforcement and tough penalties,” said Ms Sun, who pasted the campaign stickers on her own car.