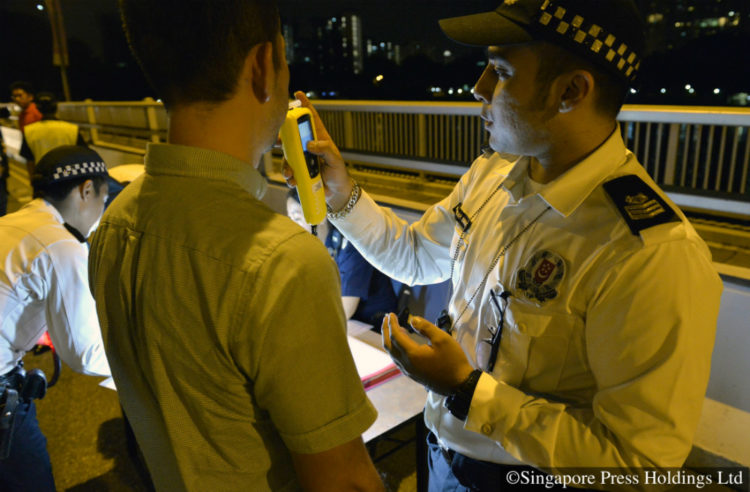 A driver going through a breathalyzer check by a traffic police officer at a road block along Nicoll Highway on July 24, 2014.

Chief Justice Sundaresh Menon on Friday (July 28) laid down sentencing guidelines on the jail terms to be imposed on motorists who cause injury or damage to property as a result of drink driving.

The Chief Justice said the custodial threshold will not typically be crossed in cases involving slight physical injury or slight to moderate property damage, coupled with low culpability, such as when the breath or blood alcohol level is low and there is no evidence of dangerous driving behaviour.

Any other cases will attract a jail term, which would be determined according to the harm caused by the culpability of the motorist:

His 57-page judgment identified the different degrees of harm and culpability. For instance, serious injury would usually involve fractures, including permanent injuries or those that require surgery.

The guidelines were issued in his judgment in the appeal of 35-year-old Stansilas Fabian Kester, a Singapore Armed Forces major who brushed past a pedestrian and collided into a motorcyclist when he beat a red light at the junction of South Bridge Road and Upper Pickering Street at about 4.45pm of Jan 29 last year.

The pedestrian and motorcyclist suffered minor injuries. Kester was found to have 43 micrograms of alcohol in every 100ml of breath, which was 8mcg above the prescribed limit.

Kester pleaded guilty to a drink driving charge and was sentenced to two weeks’ jail and banned from driving for three years. A second charge of dangerous driving was taken into consideration.

He then appealed to the High Court, arguing for a fine.

On Friday, the Chief Justice classified the case as one of moderate harm and medium culpability.

Kaster had caused injury to two people as a result of his drunk driving and while his alcohol level was on the lower end of the scale, his driving behaviour was dangerous.

“The appellant was a source of immense danger when he accelerated into a junction at the intersection of two busy roads in the Central Business District during peak traffic hours. In doing so, he also violated road traffic rules by beating a red light.”

The Chief Justice found that the custodial threshold had been crossed and the starting point was a two-week jail term. However, the court took into account as mitigation that he had compensated both victims, and reduced the sentence to a week’s jail. The driving ban remains.