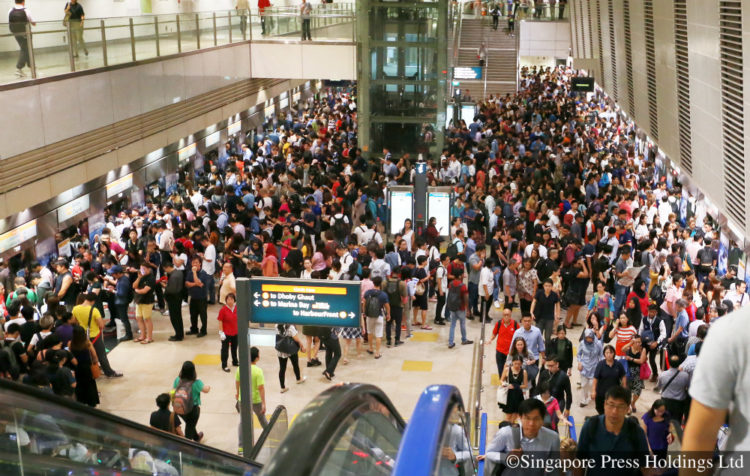 Crowds line up to get on the trains at Bishan MRT station.

A signal fault held up train service in both directions on the Circle Line for more than two hours.

Rail operator SMRT first tweeted at 6.28am, warning commuters that trains are moving slower between Buona Vista and HarbourFront stations.

“We are investigating the fault,” it added.

Less than 15 minutes later, SMRT said to add 20 minutes’ travel time between the stations. Free regular bus services were made available along the affected stretch.

More than two hours later at 8.35am, it announced that the fault was cleared but said stations and platforms were still crowded.

Throughout the morning, commuters complained on social media of long delays and trains were not moving at all. Some tweeted photos of crowded train platforms at several stations.

Separately, the East-West Line was affected by a train fault on Wednesday morning. SMRT tweeted at 8.25am that that the fault occurred at Joo Koon station.

It warned commuters to expect delays of up to 20 minutes – later revised to 30 minutes – while travelling between Queenstown and Tuas Link.

The last major fault on the Circle Line was during the morning peak on Sept 11, when a train was rendered inoperable near Marymount station after emergency brakes were applied.

The faulty train had to be pushed out of the way by another train, affecting thousands of commuters on their way to work and school.